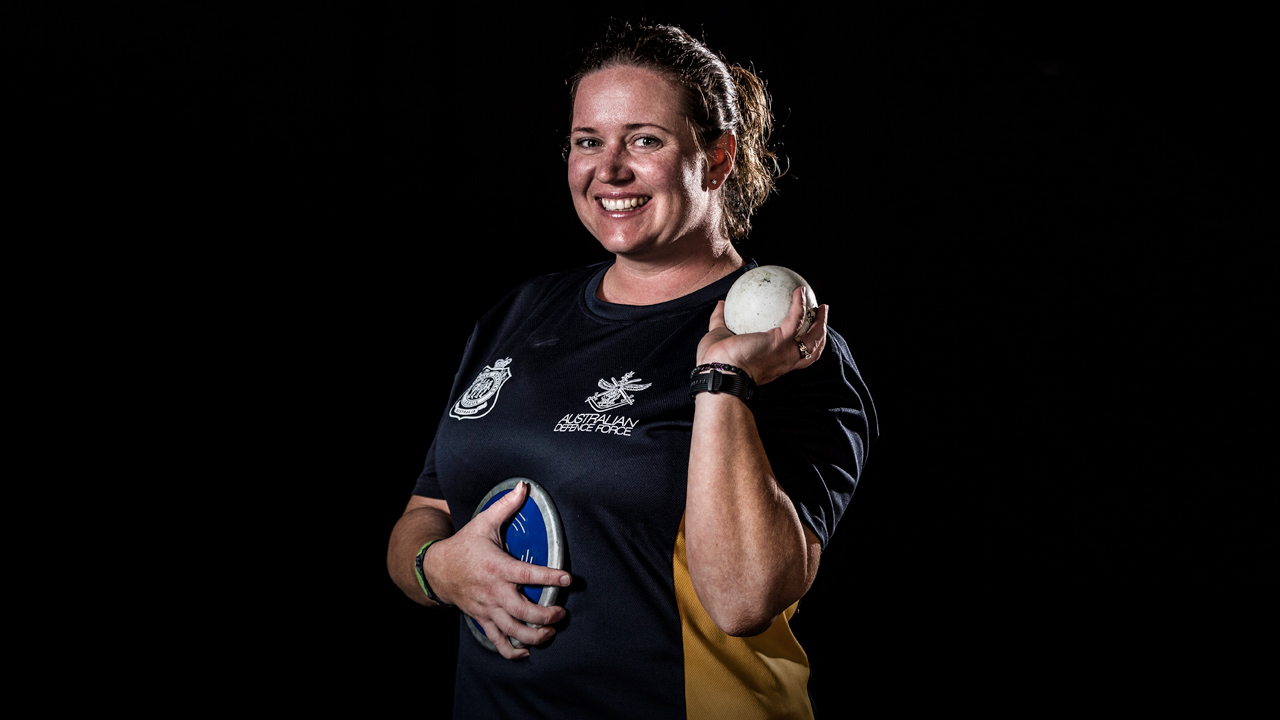 A lot of people will probably watch me representing Australia at the Invictus Games and think, ‘Why’s she there?’

‘There’s nothing wrong with her!’

I get it, these games are designed to aid the recovery of wounded, injured and ill service men and women. You’ll see that some competitors are disabled or missing body parts or have scars on their faces.

Those types of injuries are easy to see, but they only tell half the story.

Because of that, we also have cancer survivors and sufferers of chronic diseases like MS participating. Some of us have PTSD and other mental health issues. One of my teammates even has a brain tumour.

Every competitor has their own personal reason for being a part of this wonderful event, but the thing that binds us all together is the emotional journey we are on with our mental health.

Even for those of us with the most terrible physical injuries, the biggest challenge is finding the mental strength to rise above our individual circumstances.

Before my Invictus journey began, I’d spent years with crippling anxiety and depression. I always struggle to explain the cause of it, but the closest answer I can give, is that it was the perfect storm of shitty challenges life threw at me.

Taking different medications and seeing numerous mental health professionals simply allowed me to ‘manage’ my illness. Adding sport into the mix, with my training for the Invictus Games, has given me my life back.

What better measure of your success is there, than becoming a better version of yourself – one that I can be proud of.

This week, I’ll be wearing the green and gold in front of the people I love, and regardless of whether I win or lose, I’ll be proud of myself. You can’t understand how much that means to me.

The military has always been in my blood. My dad and uncle were in the army before me, and my grandparents and great grandparents before them.

I suppose I always just had the idea that I’d continue that tradition.

I spent four years in the army, before I transferred to the navy and took up a role in electronic intelligence.

It’s my job to intercept and analyse electronic transmissions in order to work out the enemy’s intentions. And I can’t really say much more than that, unfortunately, because it’s all super top-secret stuff.

I’m not even joking.

My job can also include electronic warfare. Basically, when at sea, it’s my job to protect the ship from incoming missiles and things like that.

I spent most of my first two-and-a-half years in the navy at sea, doing a lot of work in South East Asia and the South China Sea.

In many ways, it was a big adventure.

My favourite memories are the beautiful sunrises and sunsets, where the ocean stretches out from the boat as far as the eye can see. And the swimming stations, where we stopped in the middle of the ocean to jump off and have a swim.

I got to see incredible places like Kota Kinabalu in Malaysia, with so many beautiful islands off the shore that we explored. It was like taking a step back in time, to another world.

Not many people get to have experiences like that with their jobs. But it’s a double-edged sword because you spend months at a time, living away from the most important people in your life.

In fact, for the duration of a tour, your whole life shrinks to a simple routine.

Sometimes you’ll do that working eight hours on and eight off over 24 hours. Other times you’ll work seven and fives.

That routine can make coming home hard, because you haven’t had to think about anything else for such a long time. All of a sudden, just having to do simple things like cook, juggle family commitments and drive to the gym can feel like difficult tasks.

That life is behind me now though.

I haven’t been back at sea for a while because I developed chronic shoulder problems as a result of doing excessive push ups and weightlifting in my training. I used to push myself so hard in the gym that my poor shoulder just couldn’t keep up.

With my first surgery, they cut a piece out of my AC joint that was rubbing on another bone and repaired my torn bicep tendon.

My shoulder came good for a couple of years after that, before it slowly deteriorated again. The second surgery was for a total stabilisation and repair of my torn labrum and bicep tendon.

I’ve lost between 10 and 20 per cent of my personal range of movement. I’ve built back a lot of my strength, but I have limits that I never had before.

Between my first and second shoulder operations, I moved into a new intelligence role in Canberra, working in an office.

Everyone knows that a soldier’s job on the ground in a war zone is high stress. My team are the direct support for those men and women, with no less responsibility. Their lives depend on us doing our jobs well and most people don’t understand that.

The pressure can be pretty crazy and working with a high security clearance means you’re not able to talk about the things you do at work. That alone creates a lot of stress because your family and friends can’t understand how you’re feeling or why, even when you’ve had a really shit day.

On top of that, we also have the pressures of our day-to-day lives to deal with.

Somewhere along the way, things started to snowball and I convinced myself that the stress and anxiety I was feeling was normal. Because of that, the cracks were already there when my family started going through an especially hard time in 2013.

My sister had gone off the rails and was considered unfit to look after her five-week-old baby.

Child services required a family member to look after the little girl, so they asked my husband and I to step up. You can imagine the stress that added especially when, soon after, I lost the support of a number of family members.

Even for those of us with the most terrible physical injuries, the biggest challenge is finding the mental strength to rise above our individual circumstances.

At this point, we already had a two-year-old of our own and I was going through fertility treatment as we were trying to conceive a second child. With all that going on, my husband couldn’t understand why I was being so patient with my family.

It created a lot of tension between us.

And then we were asked to keep my niece permanently.

My heart just wanted to say yes, to help someone I love, but my husband wanted to look at the situation logically. Could we afford to look after another child? Was it the right time for us, when we already had so much going on? He didn’t think it was a great idea.

But at the end of the day, we couldn’t leave her in the public system. My husband trusted me to make the right call, and we went with what was in my heart.

At this point, we’d pretty much given up on ever having a second child of our own. We’d resigned ourselves to the fact it just might not be possible. Plus, with my niece to look after, we had more than enough on our hands.

And then I fell pregnant.

The first 12 months after giving birth that second time, were the toughest of my life.

I was trying to fix my marriage and all the issues with my family, while raising three children under four and returning to full-time work in a really intense professional environment.

There were times I wasn’t sure our marriage would make it.

I felt inadequate. There were a million voices in my head, all telling me I wasn’t good enough. ‘Do this. Don’t do that. You’ve got this is coming up.’ It was relentless.

In my weakest moments, overwhelmed by screaming kids, I’d snap at them because their screaming didn’t seem fair. But, of course, it wasn’t their fault. They were just being normal kids.

I was set to go in for my second shoulder surgery and everything in my world was falling apart. I was driving to work, after dropping the kids off to day care, and I just didn’t want to go any further. I didn’t want to feel like I did anymore.

‘What if I have an accident?’

‘What if I drove into that truck coming towards me?’

‘What if I drove off the road?’

It wasn’t that I wanted to commit suicide, I don’t think. I just wanted to escape, even if it meant ending up in hospital.

Those thoughts are what made me realise I had a problem.

Finding the courage to tell my husband and getting help through the defence force was the start of my recovery.