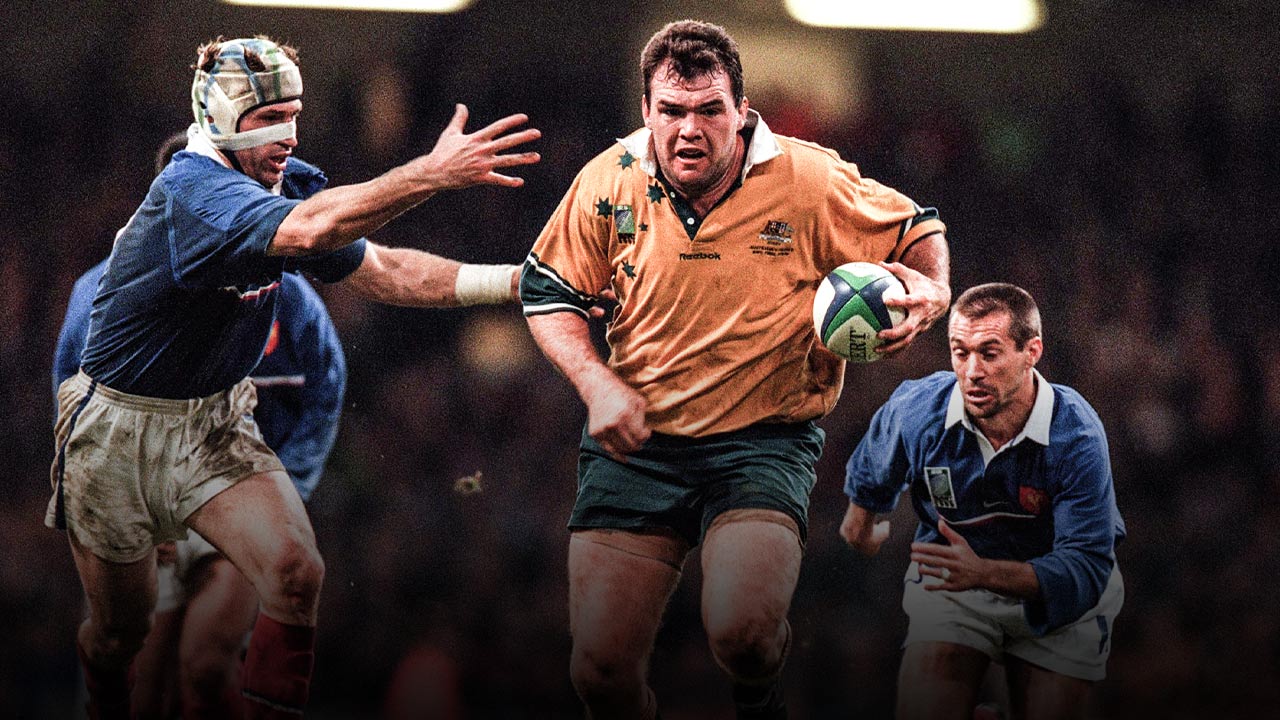 Just before I left Australia for the 1999 World Cup, I had a barbecue at my parents’ place. There were about 40 people there and I told them all about a dream I had that I was going to score a try as we won the World Cup final.

When I gave the last pass to Ben Tune for the first try against France in the final, I remembered that, and figured I’d got it slightly wrong.

But in injury time it came true.

My try summed up a lot about that Wallabies team – the first to play in a World Cup after the end of the amateur era. We were led by a meticulous coach in Rod Macqueen, who had overhauled the way we approached everything. That try came directly from the analytical work we’d done on how the French defend a lineout.

There was a hiccup as that call needed the ball to be thrown to the back of the lineout and Jeremy Paul had just come on the field to do the lineout throws. You would usually give your hooker an easier throw as a sighter and Andrew Blades suggested we change the initial call.

I said, ‘Let’s not’, and ended up scoring that try. There was one slight disappointment.

It would have been perfect if I’d been able to run away and enjoy the celebrations. But because I dived there were 14 other people on my back and it took 30 seconds to get up. By the time I got up to throw the ball in jubilation, everyone else was walking away.

Bryan Habana scored tries and celebrated with a back flip and high-fiving teammates. That’s the way to do it. When I got up some of my teammates were already back at halfway.

But in the back of my head I was thinking I just scored a try in a Rugby World Cup final, a memory I will have for the rest of my days.

It was a wonderful climax to the game and a fantastic tournament for a tight unit.

We had a reunion for that team in Sydney and everyone got an opportunity to stand up and talk about their fondest memories of that World Cup. So many people had so many different highlights.

That was a great reminder of what we achieved, the friendships we forged and that, all this time later, we were still able to celebrate that we actually won it.

‘JOHN DIDN’T VOTE FOR YOU’

It’s the little things you remember.

In 1999, Australia was voting as to whether we would be a Republic or not; whether the Queen would continue as our head of state or if we’d go our own way.

After the game, John Eales, who had been quite vocal about the Republic and who he was voting for, had to go up to the Queen to collect the trophy from her. The second player up to meet her was Tim Horan as the vice-captain. And Tim told her, ‘John didn’t vote for you, but I did.’ Our team loved that.

We took ‘Bill’ – the William Webb Ellis Cup – on a lap of the Millennium Stadium and they played ‘It’s a Beautiful Day’ and ‘Down Under’ on the speakers. Those two songs, if I hear them today, I’m immediately back there at that tournament, goosebumps and a big smile on my face.

When we reached the change room, the trophy was passed one by one throughout the players and staff for the same ritual. As it reached me, everyone else yelled out, ‘Owen Finegan! World champion!’ and I drank out of the Cup.

The whole world is trying to win the World Cup and it’s difficult to do. That’s why we’ve only managed two, in 1991 and 1999. I have no doubt this current crop of Wallabies wants to add to that but they won’t be fully aware of how it would change them.

It becomes part of your legacy and you don’t realise how important it will be in your life. I was 27 years old and looking back 20 years since it’s happened, it’s a beautiful memory I will never forget.

THE MAN WHO CHANGED OUR DESTINY

That World Cup came along not too long after a difficult period for the team. In 1997 we were being called the ‘Woeful Wallabies’. When you have a lot of pride in the Wallabies jersey, and what it meant for you to be there, that was tough.

That culminated at the end of the 1997 Tri-Nations with a record loss to South Africa that precipitated a changing of the guard that ultimately set up the 1999 success.

Rod Macqueen took over for a tour of the northern hemisphere, and then in 1998 we beat the All Blacks in three Tests, including twice in New Zealand, and took the Bledisloe Cup back.

Rugby had become professional after the 1995 World Cup and by 1999 there was a new feel in the team. With the Brumbies entering the fray, rather than just being Queensland and NSW, there were another 30 or so players getting Super Rugby experience and changing the Wallabies dynamic.

What Rod did, with the Brumbies and then the Wallabies, was put us ahead of the game and ahead of everybody else in the new era.

Rod’s business expertise and his ability to create the right climate led to a clear vision amongst the group.

He brought in two NRL staff in fitness coach Steve Nance from the Brisbane Broncos and John Muggleton the defence coach, introduced new systems, had former Wallabies Tim Lane and Jeff Miller giving him expertise on the footy field and he made sure every part of the wider team was top notch.

He set up wonderful standards amongst the team and expectations on how we trained and how we behaved, and that gave us clarity around what was expected.

We had gone from an environment where it was off the cuff, where you’d train in the morning with no idea what you were doing in the afternoon, to getting a schedule for six months in advance.

It was the right climate and strategy – getting players to take responsibility and ownership and then having the right competency across the whole group.

We were quick to embrace a more professional environment. We went from staying in hotels to living in apartments in Caloundra, in each other’s pockets.

That built a strong camaraderie, some really close friendships off and on the field. We used to all ride pushbikes from the apartments to the training ground, all have lunch together.

Players’ wives and families would be invited to join us at times. It was like a community of Wallabies, not just the 35 in the squad.

The start of 1999 wasn’t ideal for me. I got hurt in a Brumbies trial game and needed a shoulder reconstruction, so I had to push my rehab and I was back playing within six months.

I played one or two games of Super Rugby off the bench, had one or two lead-up Wallabies games, and was desperately trying to get some rugby under my belt.

I wasn’t guaranteed a spot and I felt my role in that World Cup was going to be more about coming on in the last 20 to 25 minutes and having a telling impact on the game. Usually if you were on the bench at a tournament you wouldn’t be happy enough with that. But with limited rugby I was content with what my role had to be.

We started the campaign at Portmarnock Golf Club, where we were staying near Dublin, with a golf day sponsored by Guinness.

The idea, as it had been in Caloundra, was not to have us off doing our own thing. We had a big night, plenty of the sponsor’s product. The guitars were out, we were singing songs, celebrating each other’s company until 2 o’clock in the morning. Having a great time.

You look back now and think it wouldn’t be the preparation for the 2019 World Cup, but in those days we had echoes of the amateur era, and it was important to a lot of people who played across both those eras.

Sports science has improved a fair bit and I’m betting it will show you that drinking 10 pints of Guinness isn’t the greatest preparation for the start of the World Cup.

It certainly didn’t affect Tim Horan. He scored a try in the first 25 seconds of our first game and won himself a lifetime supply of the creamy black brew.