In some ways, being a professional athlete is a selfish lifestyle.

Everything is focused on performance. For pretty much 12 months a year, life revolves almost solely around sport, and it’s as if there’s just this one and only thing in life – and that can become overwhelming.

Given that all-encompassing focus, having balance and being able to focus on something else was incredibly important for my mental wellbeing, and my ability to perform week after week.

When there was some downtime, I made sure I’d spend it doing things I enjoyed, social events with people outside of netball, for example. Even taking my dog for a walk every day, making time to switch off and get a coffee, made a real difference to my mood.

It wasn’t just taking that valuable ‘me-time’ that helped me keep going, having a strong support network and connection to the people around me was also crucial. It’s probably only now I’ve retired that I can look back, reflect, and realise that I sometimes took that for granted.

In sport, where things don’t always go to plan, it’s difficult to keep your energy and morale up all the time, and that’s when I would lean on the team.

Keirra Trompf and Gretal Bueta (then Tippett) were two teammates who had a huge impact on me. Their ability to remain positive and see the good in difficult situations lifted the mood of everyone in the team, and their optimism really helped me carry on.

It was particularly beneficial heading to training on the days where you have been working, had a training session in the morning, and at 4:30 in the afternoon you have a two-hour court work session ahead of you. If we weren’t winning and didn’t have a chance of making the final, I’d walk into training thinking “How on earth do I get through the next two hours of this?”.

Then I’d open the door and see their faces, and their positivity would instantly improve how I was feeling.

While there’d be times when I’d turn up to training and go, “Oh, help, I’ve got no energy today. I’m feeling a bit flat.”, I’d walk out with a rush of endorphins, feeling fantastic.

Whenever you finish exercising, you feel great, and really positive about what you’ve just achieved. The rush of all that good energy helps you feel good about yourself.

I was so lucky to enjoy what I did every day of the year. That’s not to say there weren’t challenging days, but I had a passion for netball.

Getting through ups and downs

A setback or a challenge can feel like the worst thing in the world at that point in time. During my career, injuries, grand final defeats, losses by one goal, and missing out on selection could make it seem like the world was crashing down.

What I learnt by overcoming these is that it’s all right to feel disappointed. I think it’s really important to not hide that, and to feel that sense of failure and sadness at times. But it’s also incredibly important to be able to pull yourself out of it, to develop some resilience and focus on more positive things.

To be able to get out there and do my best each week, I had to have the strength to be able to change my mindset and find the good and the lessons from our losses.

If winning was something that came easily, then it wouldn’t be celebrated the way it is. You have to go through the lows to actually enjoy and appreciate the highs.

I remember standing on the dais at the 2014 Commonwealth Games in Glasgow, singing the National Anthem after winning the gold medal. It was like somebody had pressed play on a highlight reel of every single challenging, disappointing moment in the lead-up to that tournament. Whether it had been years earlier – like losing the marathon gold medal match in double extra-time by a single goal four years earlier – or much more recent, it all came flashing back.

It sounds like a bit of a funny thing, to be thinking about disappointment when you’re celebrating with a gold medal around your neck, but it was an incredible feeling to be able to look back at what I’d overcome to be there. Without those challenges beforehand, winning gold wouldn’t have been as special.

That value of resilience and the feeling of achievement that comes with it is something I point out to young girls a lot: the good times and the successes are easy to enjoy, but they are so much more enjoyable when the road to get there has been hard.

The impact of parenthood

Ask any mum who’s brought their first child into the world, let alone one considering returning to elite sport or business or work: it’s full-on. Looking after yourself while being responsible for someone else is challenging.

Before, I’d lived this selfish lifestyle, doing everything for myself, whether it was training, diet, or late recovery. That swung around in the opposite direction when I became a mother, to becoming all about somebody else. It was something that nothing could prepare you for.

Returning to professional netball meant balancing things like not getting much sleep with the demands of elite sport – having to go to training and be switched on, for example – and then coming back home to being a mum, not just being able to relax after a training session.

I managed it by becoming a lot more organised, by setting more routines and schedules, but it was full-on. 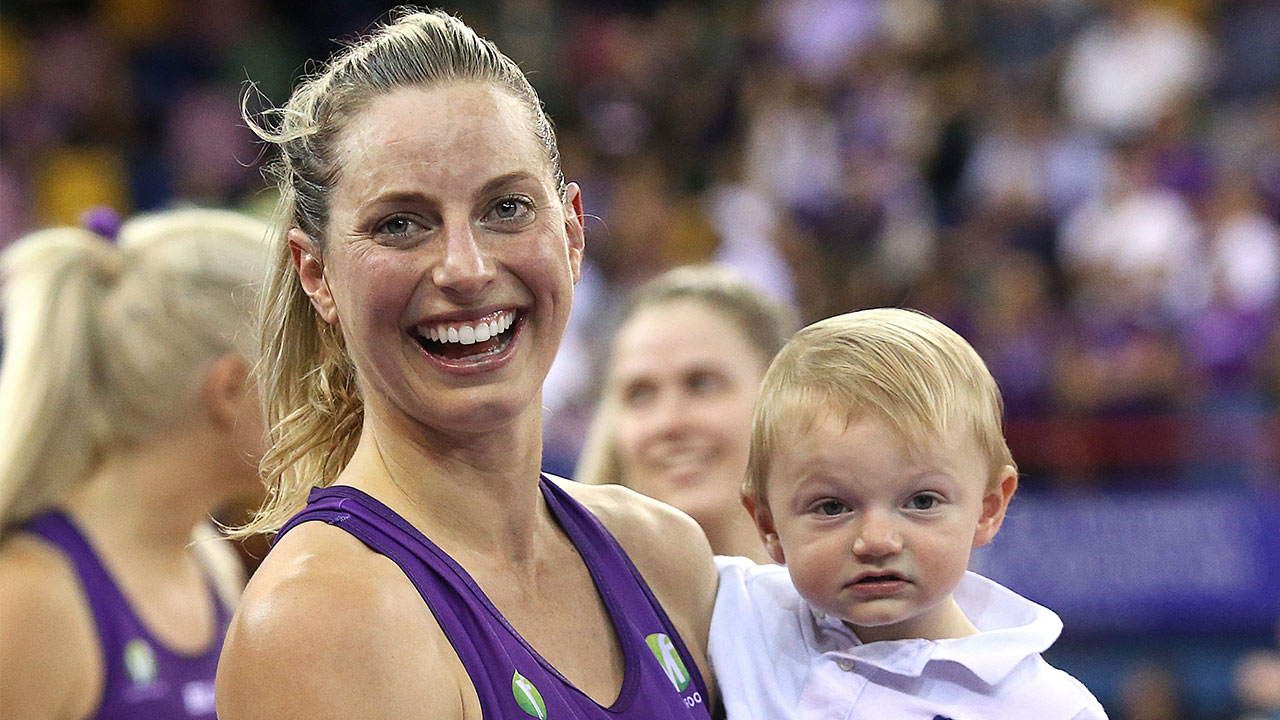 A big part of success is the people around you. I’ve always been lucky to be surrounded by great people, and probably had more help from my family than ever before to have little Barney and be able to come back and play.

Ultimately, when you’re a mum who spends all their time looking after others, it’s really important to build some kind of regular ‘me time’ and self-care into your routine, to make sure you’re looking after yourself and prioritising your mental wellbeing. For me, that’s taking the time to stay active.

After Barney, I still felt capable of getting enough exercise. And then Frankie, my second, came along and time became even more precious. It was more difficult with two kids, and now I’ve found myself asking “How on earth am I ever going to get out of the house with three children?”

While it’s just about impossible to exercise every single day with young children, especially a newborn, I still make time to stay active and am a lot smarter about how I go about that, because I know it’s important for my mental wellbeing as well as my physical health. The kids keep me physically busy – a lot of my exercise is running around after them – but I do a lot of Pilates and other, lower-impact activities rather than going out for a run or anything too strenuous.

It’s so important to keep some level of exercise up, even if it’s just a half-hour walk to clear the head – personally, I find it stops me from becoming stressed or agitated.

Retirement helped me appreciate how important staying active is for my mental wellbeing. My job was keeping me fit and healthy – it didn’t matter whether I felt like training, I didn’t have a choice, but I always felt better for it afterwards. Now that I’ve got a choice, I still make time to do those sessions, because I know how beneficial it is, I can’t imagine ever giving it up.