I made my Tigers debut at Campbelltown against Wests off the bench. I came on and all I remember is thinking, ‘That’s Wayne Pearce, that’s Garry Jack, that’s Ben Elias’.

I was just in a haze of wow. I went up in the defensive line and Wayne Pearce just smashed this dude. I was thinking, ‘This is next level’.

I was in awe of where I was — that was for sure. I was in Year 12 when I played the grand final.

It was a surreal experience, having cameras come to my school and do interviews. 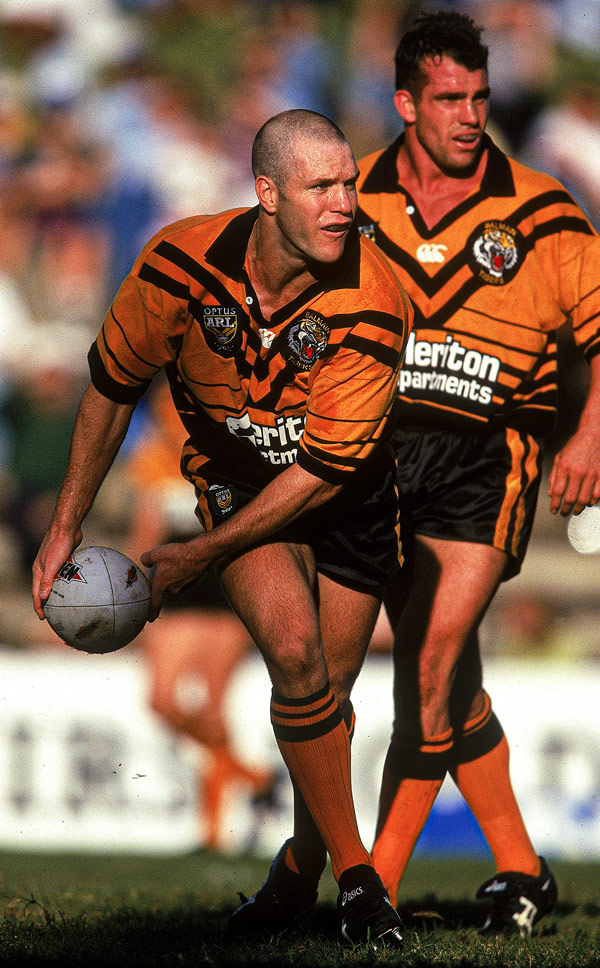 We had played Canberra during the year (1989) and we had beaten them. But they didn’t have their representative centres, Mal Meninga and Laurie Daley. In the grand fina, Mal was the guy opposite me. I think I was 78 kg and he was 108 kg.

I wasn’t scared. I knew I had enough pace but I knew I couldn’t take him front-on or he was going to run over me.

I asked Wayne Pearce, ‘How am I going to get Mal? Can you teach me?’ He said, ‘Brash, it’s easy. When he’s running at ya, all you’ve got to do is bend down, pick up some shit and throw it in his face’.

I said, ‘Mate, we’re on the SFS, there’s going to be nothing on the ground’. He said, ‘There will be when he starts running at ya’.

Over the years I came up against him a fair few times. My trick back then was get the jersey. Go side on and get him around the collar – we had decent collars then – and use his own body weight to take him down. Or go really low, side-on. I could not take him front-on.

I would rather have a big guy running at you than a little guy. A big guy is going to run at you because he thinks he’s going to run over you.

And you can take him. Someone with feet and pace like Brad Fittler and Chika Ferguson, they’re way harder.

Especially when you’re at fullback and they have room. In the centres you’ve got help but, at fullback, give me a big guy all day who’s got no step.

After the grand final loss, all our guys were laying down. I was really upset at losing that grand final but I thought, ‘Hey, you know what, I’m just starting, I’ll have plenty more grand finals’.

I had one more finals game the year after that and then I never played a semi-final again.

That’s why State of Origin became so much of a big thing for me. It became my place to get a trophy, play with some great players and be in a winning team.

’89 became a blur those two weeks of the finals series. I look back and think I was so lucky I came into that team at that time. That life experience and those life skills. Back then, the boys said to me, ‘Brash what are you doing with your money, buy property’. I’m so glad they said that. I was always a bit tight anyway.

But training-wise. Work ethic. To come into the team of legends that had been there, done that for years. And we were a great team. It was a blessing. Everyone was so good. A great environment of guys who knew what it took to be the best.

Caddying is a lot about psyche. Saying the right thing at the right time.

I played a few rounds with Adam Scott. He’s a champion. I played with Ian Woosnam. I played with Colin Montgomerie, probably two of my first four rounds when I was caddying with Terry Price in Europe.

There were a few good drinkers. But the best thing was we were all good at recovering. We’d have a good night but when it got down to play and train hard, we did that as well.

Monty was awesome. People gave Monty a bad wrap. He was a little bit of a crowd Nazi. You can’t step on a twig or he goes off his head. But he was a funny guy, very talkative. You found that on the European tour back then, they were way more talkative.

You got to the PGA tour and no one talked to anyone; they just go about their work.

We were in Spain once with Monty. There was no one there. About three people in the crowd and they were 50 yards ago behind a rope.

We’re teeing off down this chute and we’re walking off. And this guy starts waving a hat and a pen. Monty goes, ‘Ohh’, and starts walking over to him. Monty almost gets to him after about 40 metres of walking and the guy goes, ‘No, no mate, the caddy’. He was a rugby league fan.

The history we should all celebrate

Angus Crichton was humbled by his first trip to Arnhem Land to meet the families of two former school mates. That journey lit the flame for his new charity, First People Project.