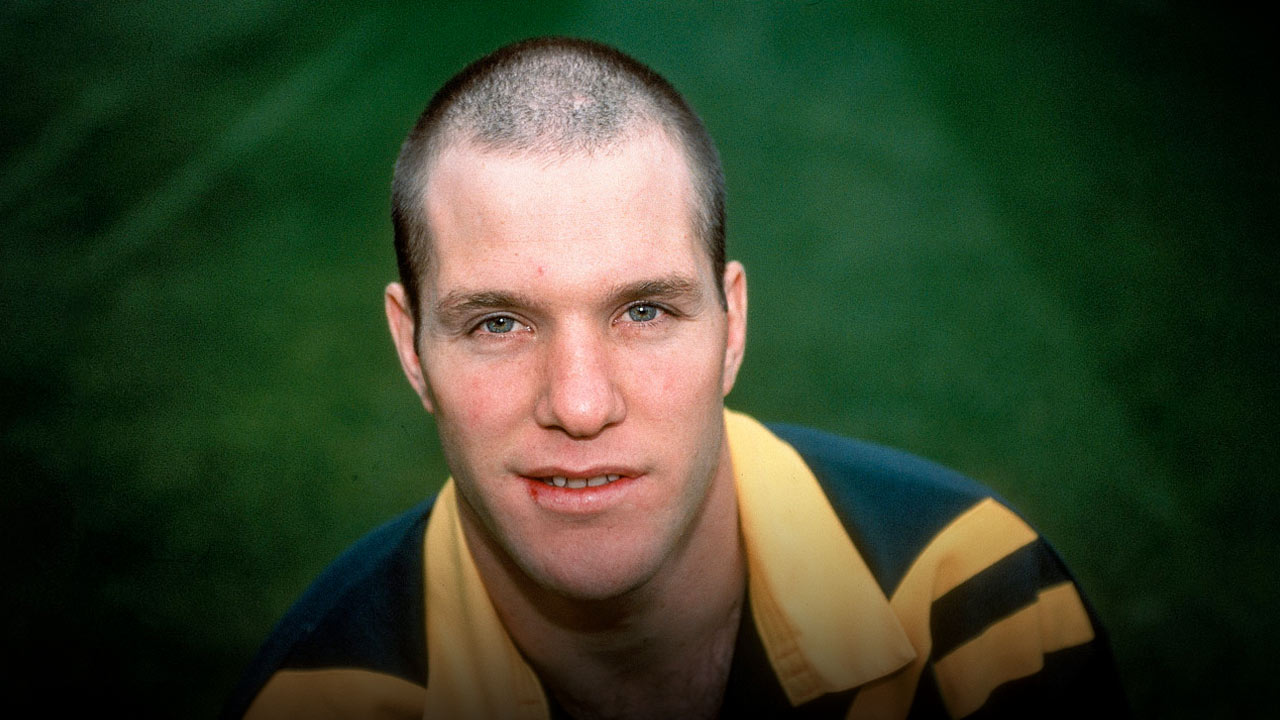 The glory days of bonding

The glory days of bonding

Tim Brasher played a grand final for Balmain Tigers when he was still at school, and later represented NSW in 21 Origins. He talks about that and his days as a pro golf caddy in this extract from the Talking with TK Podcast.

I enjoyed Lang Park. Probably the two grounds I enjoyed most out of all the grounds I played were Lang Park and Wembley stadium, and I played some of my best football on both of them.

I love the fact they hate us.

My first game at Lang Park was as an under-16 in a curtainraiser on the night of the can throwing in 1988.

We had no seating. After our game they put us inside the old fence on the sideline, basically opposite where the can throwing happened. We got front row seats to it. It was amazing.

Four years late,r I got to jump on the field and play the big game instead of the lead-up and it was fun.

It’s the best game of footy in the world. Your average Test match, especially in my day when we never lost, didn’t compare. Origin was as tough as it got and as good as it got.

I was 21 and just hoping to do okay in it. I remember running out and knowing where my brother and sister were sitting and proud of being there for the family.

I was a back utility and I got a full half of footy. Rod Wishart hurt one of his hammies, so I went out on the wing and probably had one of the best games of footy in my life.

In the old days we bonded a bit differently. We had a few beers. Went out and had a bit of fun. That first camp bonding was ‘pub golf’ around the Rocks.

I was a non-drinker. Paul Sironen told the boys, ‘Brash doesn’t drink’. I had to carry a green jacket and a scoreboard until someone was the leader and they’d wear the jacket.

Each pub, I’d walk in first with the scoreboard up. By the second pub, Chris Johns and Craig Salvatore were about 20 under. I’d tell them this pub is a par 4 or a par 3. By the third pub, I decided I had to have a few drinks because I couldn’t understand what these guys were saying.

I decided that whenever I made a rep team I’d enjoy the bonding sessions. I’m so glad I did because I bonded well and we had such a great time.

There were a few good drinkers. But the best thing was we were all good at recovering. We’d have a good night but when it got down to play and train hard, we did that as well.

It was just a different era. It helped me to bond. I had to get to know Laurie Daley, these legends of the game I’d watched for a few years before that. It helped me break the ice.

Most of my rooming was done with probably the ugliest man in rugby league, Andrew Ettingshausen. Got to room with ET, made me feel great about myself.

Phil Gould was the best representative coach I had. He was a great coach for NSW. I’m not sure his style would have suited me week-in week-out as a club coach, but as an Origin coach he said the right things at the right time and bonded us correctly.

Sometimes, if we’d gone pretty hard in the first bonding night, Gus would get us at the oval and say, ‘Go home, go to bed’.

Things he made us do like walk around the field at Lang Park, get your own little corner, think about your family; I loved the way he went about things. His game plan wasn’t about changing us because everyone there was a superstar in their own right. I loved his style.

There are two types. People who can handle nerves and those who can’t. You’ve got to embrace them because you’re going to get them.

If you don’t get nervous, then it doesn’t mean anything to you. But it’s how you react to them.

That’s what I loved about Origin. If I could get that feeling in my life again, pre-game, I’d love that. Your legs were wobbly, you felt hollow, you got out there and it was such an amazing feeling and then you’d use all that energy to play fantastic.