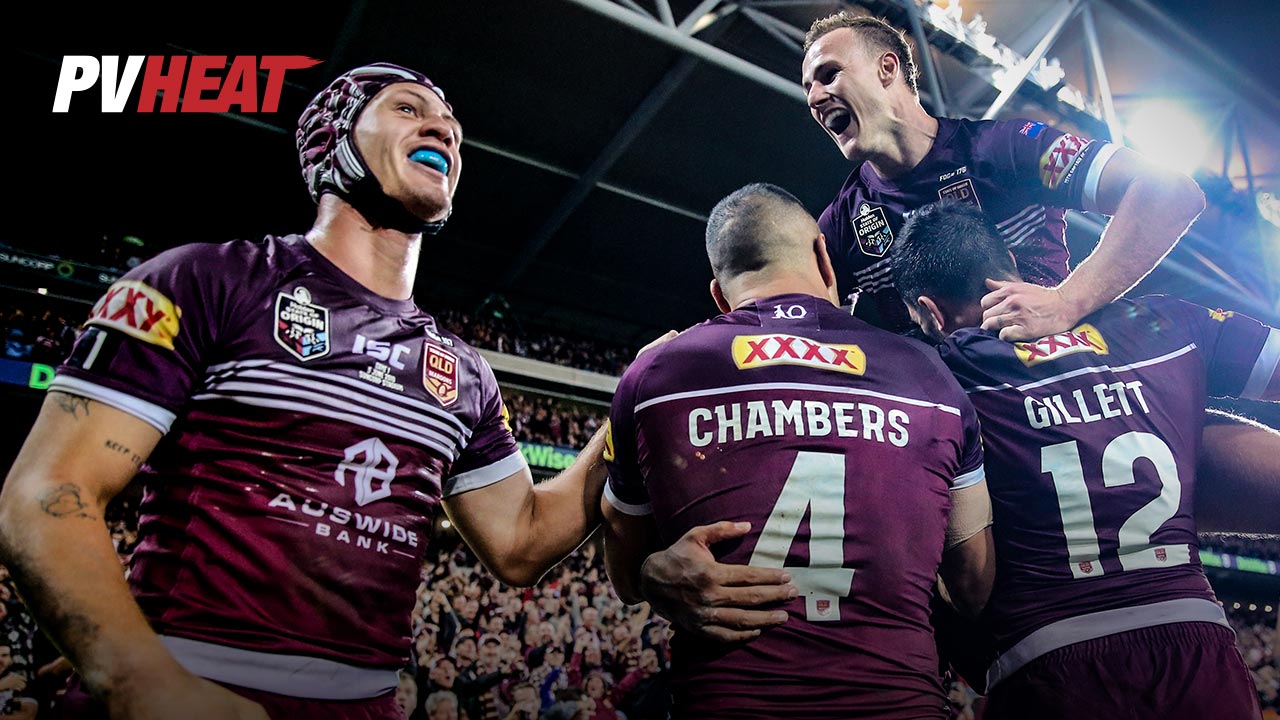 ‘A lot of loonies in Queensland’

‘A lot of loonies in Queensland’

Queensland came from an 8-0 deficit to beat NSW 18-14 in the opening game of the 2019 State of Origin series in Brisbane.

Dane Gagai scored two tries to take his tally to 11 in 11 Origin games – more than the rest of his Maroons teammates last night combined.

New fullback Kalyn Ponga showed he could be in for a long reign in the No.1 jersey with a couple of try assists and one huge hit on Latrell Mitchell that helped secure the win.

Cody Walker struggled in his debut for the Blues alongside Nathan Cleary.

Rival coaches Kevin Walters and Brad Fittler, and some of the star players, gave their verdicts post-match.

This is PV Heat, a home for the best athlete reactions to the biggest news in sport.

Dane’s an Origin player. Every Origin we play he’s in the top 2 or three players. He’s won numerous awards at this level. That try he scored in the second half … that is one very few people in the game – with his speed and timing – could have scored. We’re very fortunate he’s in a Queensland jumper.

The guys on the inside have done the work to allow him to showcase his skills. But he’s definitely a talent. Whichever wing he’s played on he’s been great for Queensland and we’re really thrilled to have him as part of our group. It’s not so much what he does on the field but off the field as well. He’s a very strong leader.

ON HIS LINKS WITH THE COACH WHISPERER

I didn’t read any of what’s been said. My big focus was on the team and making sure we did everything we could to get that right.

I don’t see myself as anything other than a person who loves rugby league. I love being involved, I’m very passionate about it. I love Queensland and rugby league.

If (working with Bradley Charles Stubbs) makes me a loony? Well there are a lot of loonies up in Queensland I can tell you. Not just me.

ON A CHANGE OF BACKROOM STAFF

The whole week we changed a lot in our preparation and I thought that was very influential. We stayed in a new hotel, we got some new staff members in as well. With all respect to the previous staff members they were hugely successful but I just thought this new group needed some new faces around them.

Petero Civoniceva, Johnathan Thurston, Justin Hodges and Billy Slater came in a whirlwind and it really had a good influence.

All little things added up to tonight’s win. What’s going to get me excited for Perth is we can better and we need to get better if we expect to win the game.

I felt pretty uneasy from early in the game until late in the game, in defence.

They had some good players asking questions but I don’t think they were asking good enough questions that we should have panicked like we did.

That was pretty disappointing.

They nailed the first 10-15 minutes of the second half. They took a lot of energy out of us there and really won that part of the game. It was a nice pass from Ponga for the try and the other one was an intercept.

The two tries are in the corner and an intercept, so it’s not as if they broke us up all over the field.

ON TAKING WALKER OFF

They’d won a big chunk of the second half and I felt Cody was struggling to get into the game.

I think Jack Wighton did a brilliant job. It’s a shame he threw an intercept – that will haunt him. Prior to that his runs were great but as soon as we saw an opportunity to get Cody on and we needed a few tries, he came on and did a great job – set up one try and looked dangerous for the rest of the game.

It felt like they were isolated out there. They put a lot of pressure on that side.

In the second half, he came back on energised but they did a pretty good job on him. I saw them (the Broncos) do it to him up here a couple of weeks ago as well.

Our combinations are three and four games old. Sometimes as coaches you put a lot of pressure on, ‘you’re playing with the best go out and play this wonderful brand of footy’. Sometimes it’s a little bit harder than that.

Queensland were good. A lot of energy. They’ve got so many individual brilliance players. Munster, Ponga and Cherry-Evans started skipping across the park and got everyone nervous.

Our young guys came up with a couple of errors. Cam had a drop. Payne gave a penalty away. We didn’t need them and we didn’t answer them well either in defence. But I thought other than that he was great. He’s going to play a lot of State of Origin.