It was too risky for Sam to have a natural birth, so we were scheduled in for her to have a C-section on a Thursday morning, at 32 weeks and six days.

The nerves didn’t really kick in until we got to the hospital, but our doctor was a great support throughout the whole thing.

There were 20 people in surgery with us: four or five doctors with Sam, and teams of four medical staff for each of the children. I can’t say that it was an enjoyable experience. It was a manic and stressful time, full of worry for Sam and the children.

After each delivery, they were cutting umbilical cords and checking that everyone was breathing and healthy before rushing the babies to incubators that had been set up in preparation.

It wasn’t until everything slowed down that it hit us just how blessed we were.

Not enough hands to hold you all! Keep up the good work @sam_broxham | A new challenge everyday but wouldn't have it any other way 💕 🙉 🙊 🙈 #triplets #tripletlife

HOW EVERYTHING HAS CHANGED

The kids were in hospital for a full month after they were born which was quite tough, but thankfully none of them ever needed to be moved into intensive care.

Compared to what could have been, we were really lucky.

From the day we brought them home, I’ve had to be a very hands-on dad. It’s impossible for one person to feed, bathe and dress three little babies on their own. On top of that, you’re changing nappies and making sure they are settled.

Sam and I couldn’t have done it on our own while juggling my career as well, but we got lucky. Both our families have been incredibly supportive and without that extra help, there’s no way I would have been able to keep playing football.

We actually leased an apartment literally straight across the hallway from Sam’s mum and dad, which made a huge difference for us because when I had games, Sam’s mum could come over in the middle of the night to help feed the kids.

The baby monitors would work in their loungeroom as well, for if we ever had to head out.

The whole experience has definitely made me appreciate just how much free time I had before the kids came along. They are three years old in May and it’s a different kind of pressure now.

They can do things like feed themselves, which is a big help, but the flipside of them growing up is that they’ve turned into three little balls of energy, that wreak havoc around the apartment at all hours of the day and night.

We’re in the middle of building a new house to live in, because we desperately need the extra space. It will be great to have a home and backyard, all of our own, to share with the kids. We want to give the three of them the best life possible.

I’ve also had to become very focused on the need to provide for my family. I have to be playing well so there will be a new contract on the table for me. Beyond that, Sam and I need to set the family up for when my time playing football is over.

We started a personal training business about five years ago, called Broxham Fitness. It’s a real passion of Sam’s and I enjoy the business side of things, so it’s something we’ve really enjoyed working on together.

It was her fulltime job before the pregnancy but obviously we had to wind the business back for a little while there, until we got on top of the family stuff. Now the kids are a little bit older, we’re ramping it back up again. 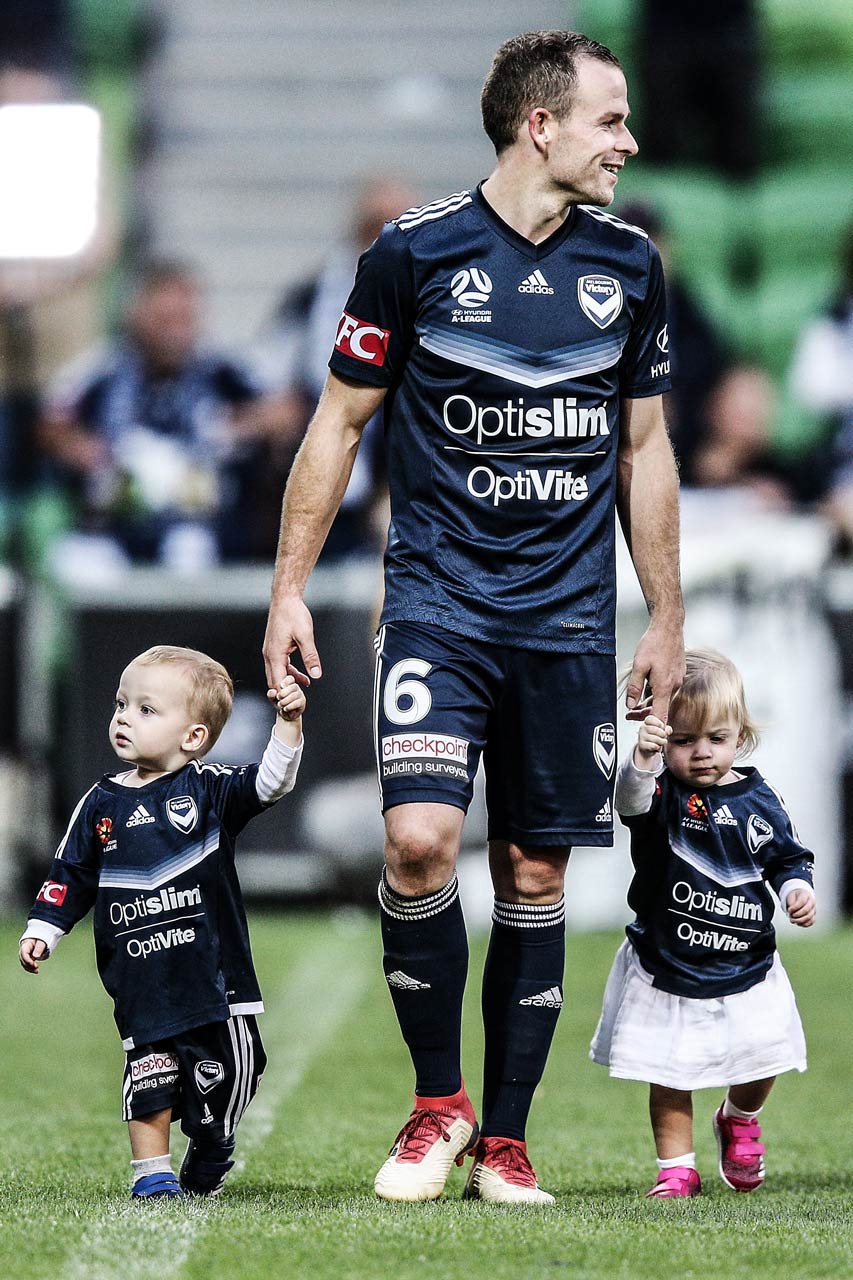 FROM KIT-MAN TO THE A-LEAGUE

I’ve been at the Victory for 13 years now. I’ve definitely come a long way since starting out as the kit-man back when Ernie Merrick was in charge.

Ernie allowed me to train with the squad and I worked with my parents on my days off, to make ends meet. Dad’s a mechanic, so I’d put power steering pumps together for him. I’d also help Mum with her job archiving conveyancing paperwork. I was patient and after 10 months of that, I was offered a contract by the Victory.

As a fan of the club, it was a dream come true.

I used to think that I was just a holding midfielder, before Ange Postecoglou moved me to centre back for one match. It changed my career. I did well that night and was soon getting consistent minutes in the backline, whether out wide or in the centre.

I embraced the challenge and it has made me a more versatile footballer, with a better understanding of the game.

That’s how you’ve got to be in this sport.

When you’re asked to play a different position, there’s no point in getting disgruntled about it. You’ve just got to get on with it. 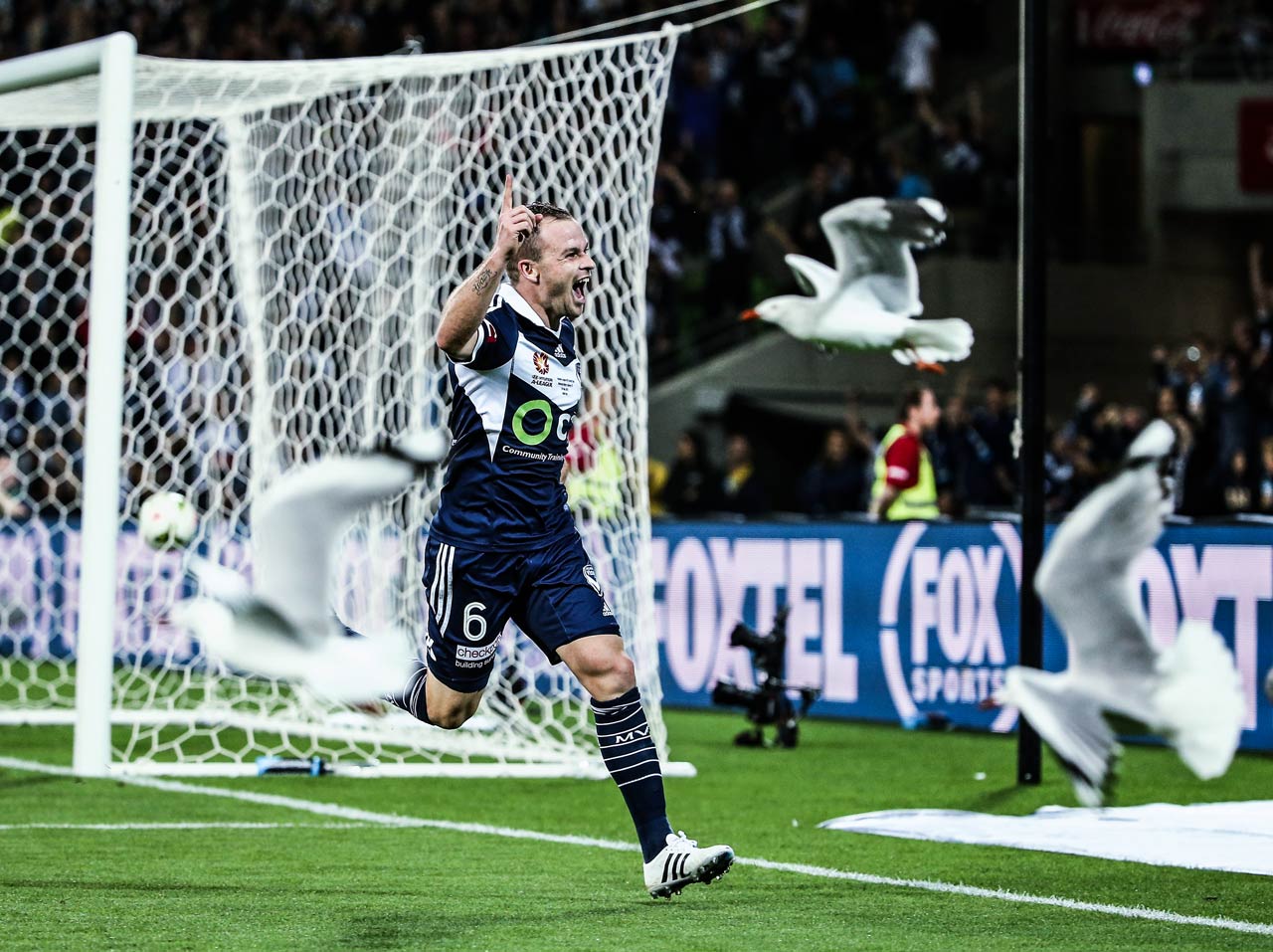 I think that goes to the heart of the strong team culture we have here at the Victory. It’s something that has been passed down since the very start of the A-League by the great leaders who have come through this club.

Carl Valeri is that man now. He sets the standard of being selfless and putting the team first.

In football that can be difficult for a lot of players because it’s cut-throat. You’ve got to be best mates with the same guy you’re fighting over a starting spot with. Not every team gets the dynamic right, but we do.

Carl and I are great mates, even though we’re often fighting for the same position. That’s how it is in the best teams.

The years when we haven’t done well is when we’ve gone away from that culture.

This season, we’re travelling alright. We’re in second place on the table despite a lot of interruptions, with players getting injured and changes to the squad every week.

But if we learnt anything last year, it’s that we can win from anywhere. With eight games left, we just need to keep the fire burning.

We’ve got the Melbourne Derby this weekend, which is a fixture I always look forward to.

We haven’t won in a couple of games now, so we’re looking to bounce back this weekend. City have been under the pump as well, so it’s probably a recipe for a pretty nervous start, before the match settles into a good contest between two teams that are desperate for a win.

The rivalry between the clubs has grown since they got purchased by the City Football Group and started expecting to win everything.

It’s been great for the game.

Being a footballer isn’t the easiest career for a father. It means spending a lot of time on the road away from your family, which is unforgiving. But as the kids have got older, it’s become a joy having them at home games, watching me play and it fills me with pride when I hear them talking about it at home.

Running out in front of my family tomorrow night is all the motivation I need.