I started netball when I was about six. Growing up in Drysdale, on the Bellarine Peninsula, I did loads of different sports – swimming, surf life-saving, gymnastics, even one dance concert. I was right into athletics until I was about 13.

I only just missed out on going to cross-country nationals. Morgan Mitchell, who’s now an Olympian, beat me by one second. It’s funny to see Morgan now. We were friends and we later played netball together.

I’d like to think I could be in training now for the 800 metres at the Olympics but, well, I’m pretty sure I chose the right sport! To be honest, it was the team aspect that drew me more to netball than athletics. I didn’t like celebrating by myself. The team component is what most of us are drawn to – that’s why we play. 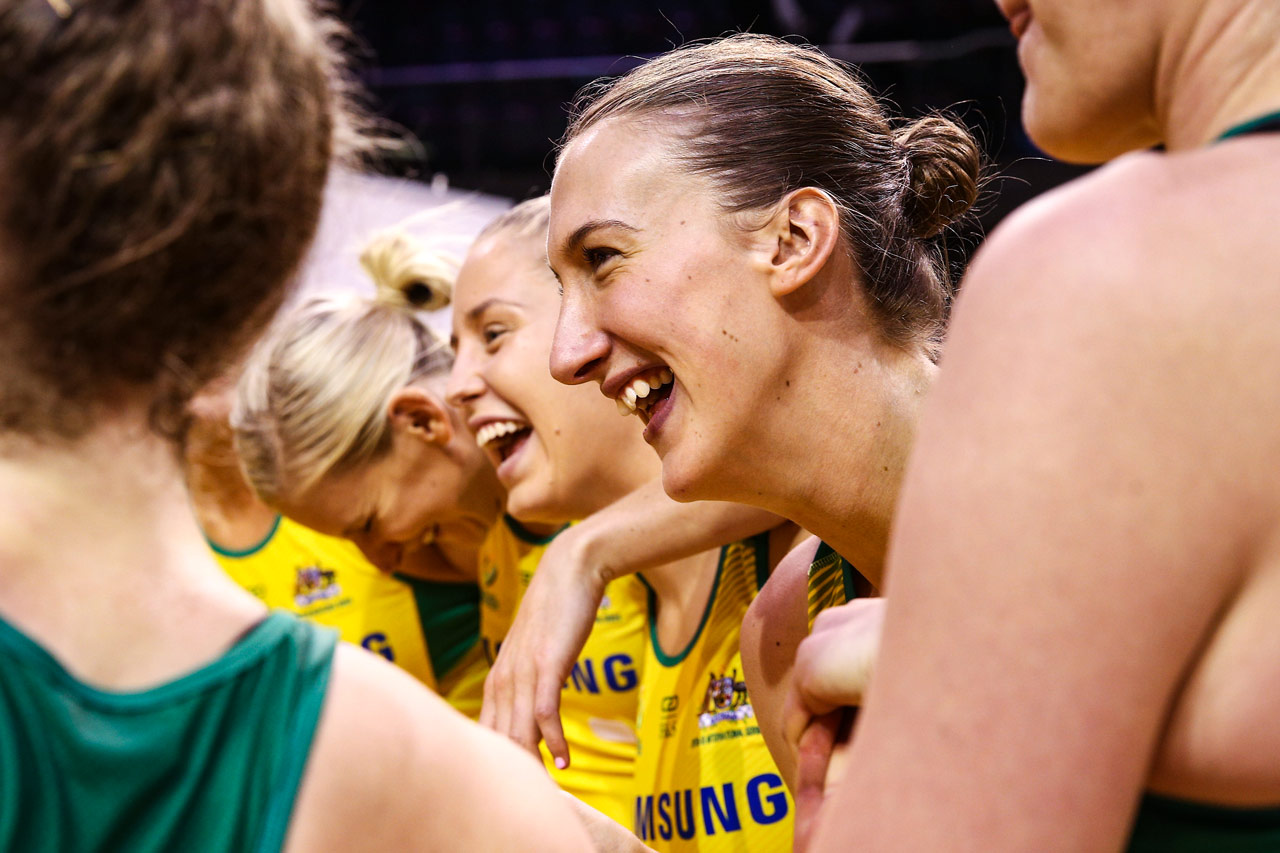 I didn’t go into defence until I was about 15. I went up to Melbourne to the Central West Zone Academy and there were literally four defenders and 20 goalers, so Marg Lind and Nicole Richardson shoved me down in the defence end because they thought I could handle that. I never really went back.

Shortly afterwards I made my first state team, the Victorian schoolgirls, with Jo Weston and Liz Watson.

Jo hasn’t changed: blonde hair and blonde ‘personality’. Just hilarious. We got on straightaway. I was goal keeper and she was goal defence. She still falls over a lot when she plays, but she’s a lot more balanced now.

Lizzie was just the same, too: a little ball of effort and muscle. Would just take on anything. I remember her being super tough and she would just go, go, go. Still does.

It’s cool to look back and special to see how far they’ve come and what they’ve achieved – including being in the Comm Games team this year. I feel very proud of them and proud of us to still be kicking on together.

Concussion isn’t a common netball injury. But I’m glad it’s something the medical profession is putting a lot of work into learning more about, as I now know how serious it is.

As a junior, I made national squads, but never an Australian team. Whenever I missed out, I’d always seek feedback about what I needed to work on. I plodded along and did what I needed to but just didn’t scrape in.

I was shocked when I got offered a contract to play for the Vixens in the 2015 ANZ Champs. It wasn’t that I lacked belief; I just didn’t think anyone would want me! I know that sounds bad, but I just didn’t think I had it. It shows that sometimes the best people to judge you are the people watching.

I’m quite hard on myself, too. I’ve tried to relax a bit, but I put a lot of pressure on myself. I guess Simone saw something in me that she liked and thought she could develop.

The feeling you get when Joey tells you we have hit the halfway mark of the @supernetball inaugural season 🦊🏐😱 | 📸:@treebs1

I saw a lot of time on the bench in those first two years! I think I played six matches – a quarter here, a half there. But I lapped it up. The court-time I got was special and I remember my debut game up in Sydney.

Qudos Bank Arena was packed with Swifts fans. I came on at halftime when we were 18 goals down. I was up against Caity Thwaites and I think we ended up losing by 16, so I got two goals back and at least we didn’t go down by 30!

I was sitting behind Bianca Chatfield and Geva Mentor in that first year, learning everything I could. From the get-go it was surreal. To be in that environment at all, let alone in that back end with Geva and Bianca, was so cool.

They were nothing short of fantastic to me. They have definitely helped shape me as a player, whether they know it or not. They’re true professionals. Taking a step back and watching them go about it was really amazing.

I wasn’t happy to be on the bench, but I was happy to be absorbing everything it takes to be up to scratch at that level. Bianca and Geva were such genuine, nice, caring people as well.

That first round against Magpies I was so nervous, but so excited to be out there. I knew I’d done a solid two years of work – I was training my butt off week-in and week-out. I was up against Caity Thwaites, again, and it almost felt like a second debut.

I couldn’t bottle up the feelings I had after that win – looking up to my family, my dad was fist-pumping and mum was probably crying. It was such a special thing to finally get out there and beat Collingwood after such a build-up.

The feeling I had in that match is something that I’ll remember for a long time. 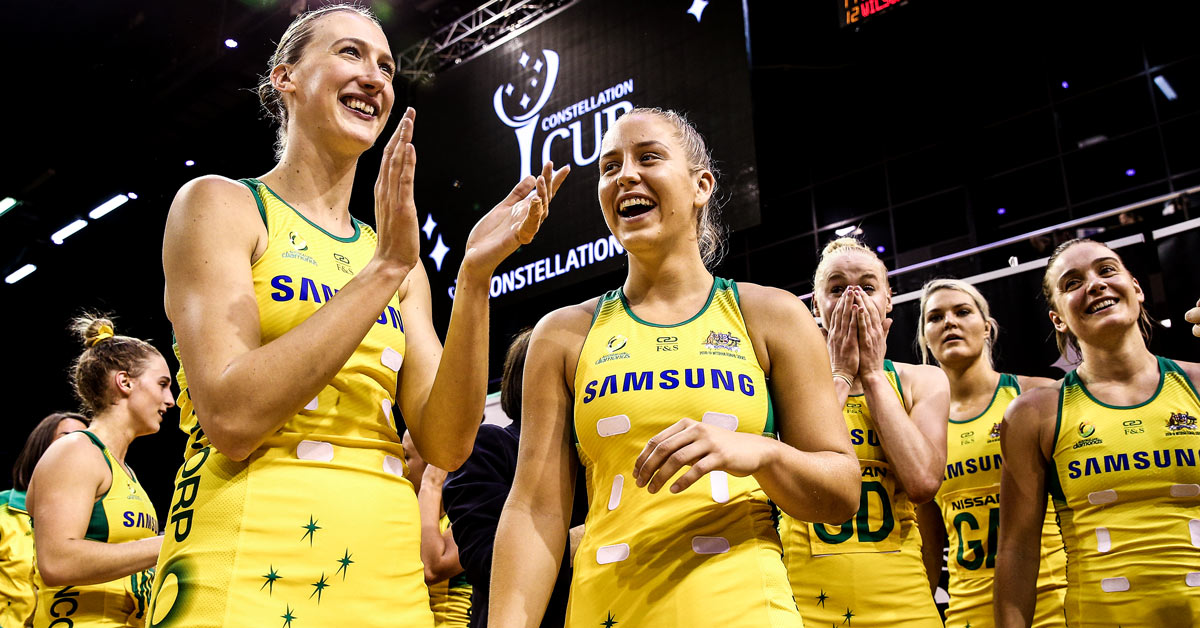 Even though I’d only played six games for the Vixens, I’d already been lucky enough to go on a Diamonds tour to the Quad Series in South Africa and England.

I got the call-up from Lisa Alexander when I was at the chemist in Geelong buying moisturiser – I remember exactly. She said they’d love me to come away as a training partner.

It gave me a big boost of confidence to think, ‘Wow, I’ve barely played any netball and Lisa wants me to come on board’.

I learnt a lot in that environment. Another special moment came when I was elevated into the squad in the middle of the year and made my debut in Invercargill against the Silver Ferns. I was shaking like a leaf, but so excited to be Australian Diamond #173.

I got the call-up from Lisa Alexander when I was at the chemist in Geelong buying moisturiser – I remember exactly.

I didn’t get my hopes up for Comm Games. I was a fresh face, still finding my way and learning what it was about. I play the same position as Laura Geitz and Geitzy eventually returned to the squad.

As a Queenslander, I’m sure she would have been thrilled to play in a home Games. As it happened, my concussion would have kept me out anyway.

We leave for the northern Quad Series on Wednesday. I don’t think Geitzy’s making another comeback! The first Test is against South Africa in Liverpool, where the World Cup will be held in July, and we play England and New Zealand in London.

I’m super-stoked to head away with the Diamonds again, especially with Jo and Lizzie. We’ve been playing together for so long. We’ve come so far. Kate Moloney, who I first played with in the state under-19s, is also in the team, as is Caity, who’s rejoined the Vixens for 2019.

We’re such a close bunch. To go away together knowing we’ve got each others’ back is a special feeling. It’s there in the background. It’s really nice to have.