Our coach, Daniel Harford, has said we needed to learn how to win.

The first time we played Adelaide this season was a real turning point for us. I thought we were playing really well. But then when we had the lead, we freaked out a little bit. We were like ‘oh man, we’re not used to being in this situation’.

In my experience of Sevens, it felt similar to the strong rivalry we had with New Zealand. There were a couple of seasons where New Zealand were dominant and, when you started to lose, it was almost like you’d go ‘ok, this is what happens’.

But in the lead-up to the Olympics we were the dominant team, and that gave us a completely different mindset going into the competition in Rio. You’d stand there, heading out into the tunnel, singing the anthem, and feeling much more composed and in control. In that sense, it felt as if we played a different style against them. I think throughout this AFLW season, we have learnt how to deal with setbacks, to be comfortable maintaining a lead, and have learnt to fight ‘til the final siren.

Obviously, Adelaide were a very dominant team in Conference A and showed in their prelim final against Geelong exactly why they’re in that position. But I think we’ll enjoy coming in as the underdogs. We did have to learn to win, but I think not having that as an expectation definitely helped.

There’s a lot of people who want to talk about the conference system. We didn’t go out there last week against Fremantle with any intention of making a point, but I guess it was nice to have a really convincing win and to show people that we do deserve to be there this weekend.

Sunday arvo footy with me mates. #pride game for the last round of the regular season. 4.05pm V Bulldogs @ Whitten Oval 📺 Fox or AFLW app

When I look at that Tayla Harris photo I just see an incredible athlete kicking the footy, which she does so well. She’s got a pretty amazing technique, and that’s the way it’s always been.

As a team, we were really proud of how Tayla dealt with everything that happened. It was so powerful how she took a stand and turned it into something really positive. 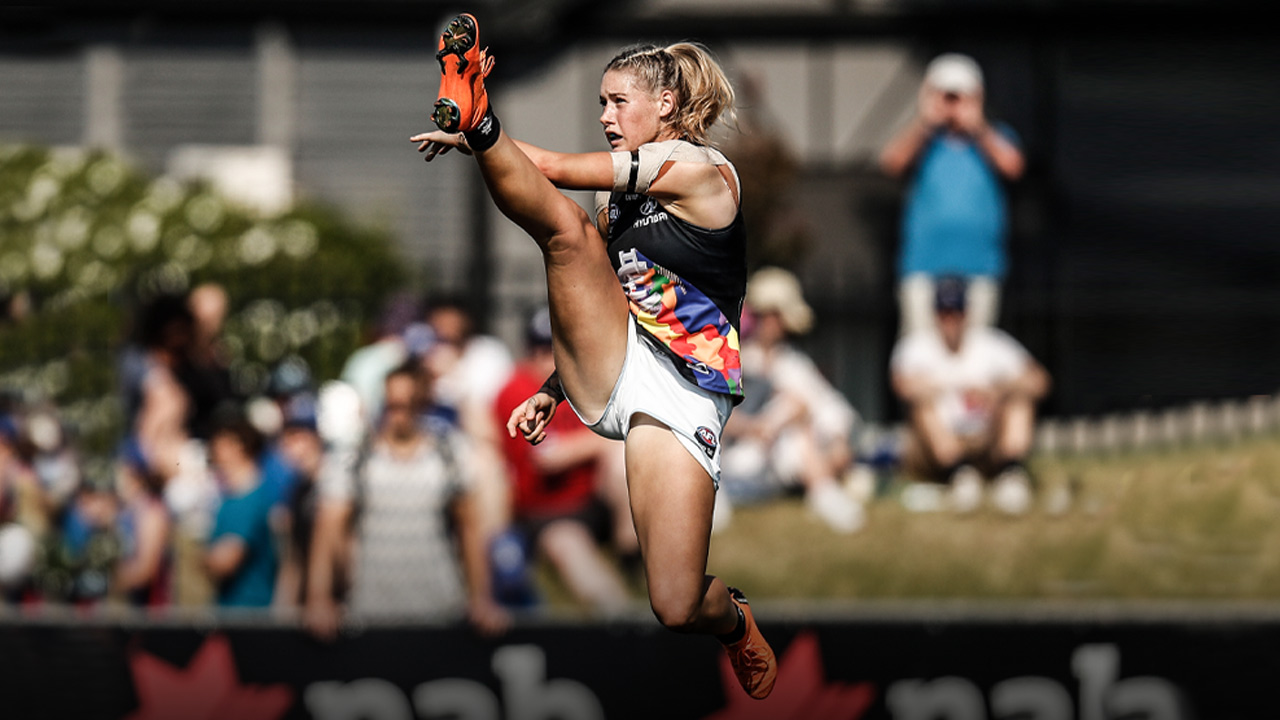 It wasn’t just the way Tayla handled it, but also the number of people – not just athletes but high-profile actors, media personalities, people from all different areas – that then got behind it on social media to make a stand against trolls. I’d really like to see that continue to happen and be a catalyst for changing attitudes.

I think it’s already started. Obviously, stamping out trolls is such a difficult thing because there’s so many people that are going to have their say and make comments.

Personally, that’s not something I’ve really experienced too much. But I’ve noticed that it comes a little more with being involved in AFLW than in Rugby Sevens.

I think the critics are often comparing our standard with men who have had access to elite pathways in football since they were young kids, and we shouldn’t forget, either, that this is their fulltime gig. There can be a fair bit of negativity at times, but I really hope that the Tayla kick will be a real turning point.

For me, playing overseas and representing your country is a massive honour, and I have to admit that the Tokyo 2020 Olympics are in the back of my mind. It’s a real temptation.

I’ve made the decision that I’d focus just on AFLW until the end of this season before reassessing my options, but looking towards the Grand Final on Sunday, I think at this point it would be pretty hard to tear me away.