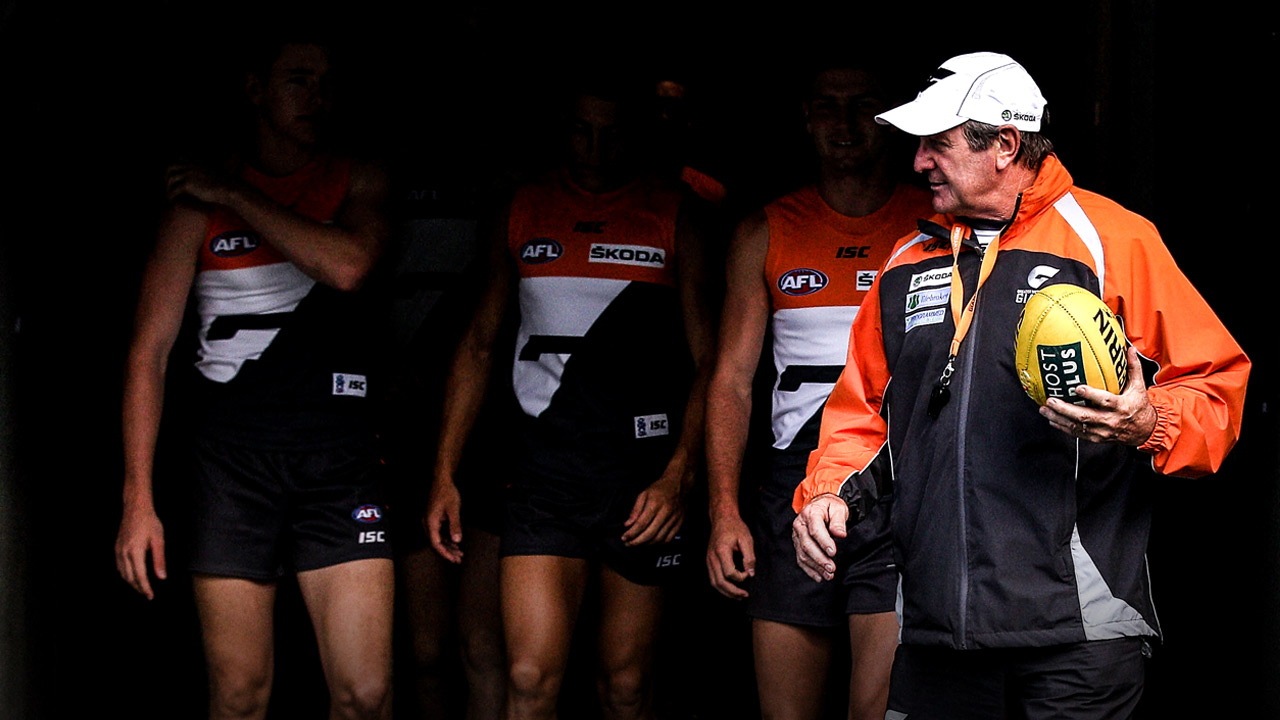 A giant smack in the face

A giant smack in the face

In that one moment, I admit, I thought to myself, ‘Shit, what am I doing here?’

I could handle the big losses. It was all part of the process of building a playing list from scratch with a bunch of young inexperienced footballers.

I could deal with our change room being a tiny hut out at Blacktown and our training ground being a baseball diamond.

I could accept that no one really knew who we were and that our crowds were tiny. But that one instant in the change room before training really made me question if coming to play for the Giants in their first year in the AFL was the right call.

I’m a pretty serious sort of guy. Any time I went to training when I played at Port Adelaide I was pretty focused. I never liked seeing people mucking around.

I always thought that if you’re about to start training, you should be completely switched on. I used to go off at the boys at Port if they did something like play cricket in the change rooms.

One day in that first season at GWS I was heading in to get ready for training and a few of the boys were playing a game of cricket in this tiny little room we had. Jeremy Cameron was batting and just as I walked in he did this massive slog sweep and the ball hit me straight in the middle of the face.

I had to take a big, deep breath and try and laugh along with boys – but I think it’s safe to say they were pretty intimidated about how I might react. Thankfully I kept my thoughts to myself and got on with it.

Looking back now, it was a pretty funny moment. But it also helped teach me to keep my emotions in check and understand that people go about things differently. It showed me that the way I did things wasn’t the way the new generation did things. And that, in turn, has helped me in my current role as a development coach at Port.

He had something special

That was one great lesson I learned in my four years at the Giants. But there were so many more. I’m so glad I made the move. The 2011 season was my last at Port. I still felt I had something to offer but was pretty sure I wasn’t going to get another chance.

Then, about halfway through the year, Mark ‘Choco’ Williams rang to find out my interest in going over to Sydney and joining the new club.

Choco talked about the talent they’d already secured and explained how the missing piece in the puzzle was getting some experienced guys over to show them some on-field leadership.

I remember he made a point of mentioning a couple of these young players as being super-talented and destined for big things in AFL footy. Funnily enough, Jeremy Cameron was one that he named.

I’d never heard of Jez, of course, but Choco said, ‘You and Tredders were good, but you’ve got nothing on this Jeremy Cameron guy. He’ll be one of the best players you’ve ever seen’.

I thought, ‘Ah, righto’. But he was right. Jez is one of those players who’s good at everything, whether it was cricket – as he displayed in the change room – or footy or anything else, really.

Another one who struck me early on was Nick Haynes. A lot’s being said about Nick at the moment and I often think about one day, in particular, one of his first days of pre-season, he was a forward and I was a back and I remember I just couldn’t keep up with him.

I thought there and then he had something special about him and that was confirmed even more when I was coaching the backs in my last couple of years there, working with Nick and Phil Davis, Adam Kennedy and the others – it makes me pretty happy to see how far those guys have come and how well they’ve performed in the finals.

The road to Blacktown

That call from Choco came at a good time for me. The offer to come to Sydney was attractive because just to feel wanted was important given what was happening at Port. In that regard, it didn’t take much of a sell, to be honest, and I set about getting my body into the best shape I could so I could set the kind of example for the boys as was a big part of my role there.

I ended up training as hard as I ever had in the lead-up to the first pre-season.

There were some nerves. I didn’t think I’d ever leave Adelaide and playing for a club with no history, no culture – nothing, really – was confronting. But I weighed it all up and it was an opportunity that was unique and not to be missed.

I arrived in Sydney pretty early, a bit before all the boys started pre-season, because I wanted to get a feel for the city and settle in a bit. My old teammate at Port, Dean Brogan, followed a couple of weeks later.

I remember the first time I drove Broges out to training, we were heading down Parramatta Road out to Blacktown, it was about an hour in the car and eventually he said to me, ‘Come on mate, it’s not this far out, is it? Surely not…’

It could have been worse. We were coming from Breakfast Point, where all us players were living, so it wasn’t a huge distance. But traffic can change everything in Sydney and there always seemed to be a lot on Parramatta Road.

Once we arrived, Broges saw for himself that there were basically no facilities. There wasn’t even a footy field.

The thing is, it really wasn’t as bad as it sounds. Change-room cricket games aside, all the young guys there had such a great attitude. They seemed to have a good understanding of the chance they’d been presented, to make a career in the AFL.

That realisation kept the whole mood of those early training sessions positive, despite whatever obstacles there were. The guys were all genuine footy lovers and were keen to learn as much as they possibly could. They were interested in our stories and weren’t afraid to ask questions.

Among them was Israel Folau. I knew Israel had never played footy before and had a lot to learn about the basics of kicking and set shots, along with other aspects of the game. Choco did plenty of goalkicking work with him and he actually picked it up pretty well for a guy that had never done it before. He was really strong in the gym, too.

My impressions of working with Israel in those early days are that he was a quietly spoken guy who was very respectful, even though he was a bit out of his depth in terms of the sport he was playing. But his contribution to the club in promoting it and getting out and about in western Sydney I think definitely made him worth whatever they paid him. He got a lot of people talking about us.

How Sheeds gave us hope

There are a number of people who’ve been involved at the Giants off the field who can hold their heads high as the team prepares to play its first grand final. Among them is Kevin Sheedy.

Sheeds is one of the best people I’ve ever met in football. After the very first game, against the Swans, it was a 60-point loss but in some ways felt like a 60-point win. We were back at the Palace Hotel afterwards and I had six mates who’d come over to be at the game.

Sheeds had never met them before but as he was walking by he sat down and said, ‘Boys, tell me about yourselves, where you’re from, what you do…’ My friends still talk about that to this day.

It was a great example of what Sheeds offered the club, that ability to really care for people and treat everyone the same, whether it was our players, the fans, sponsors or anyone else.

Izzy was important in getting people to know who we were, but Sheeds was a master at promoting the club. He gave everyone hope that things were going to work out. He managed to get people and businesses in the area involved. It’s fair to say he’s had the biggest influence on the marketing and promotion side of the Giants even to this day.