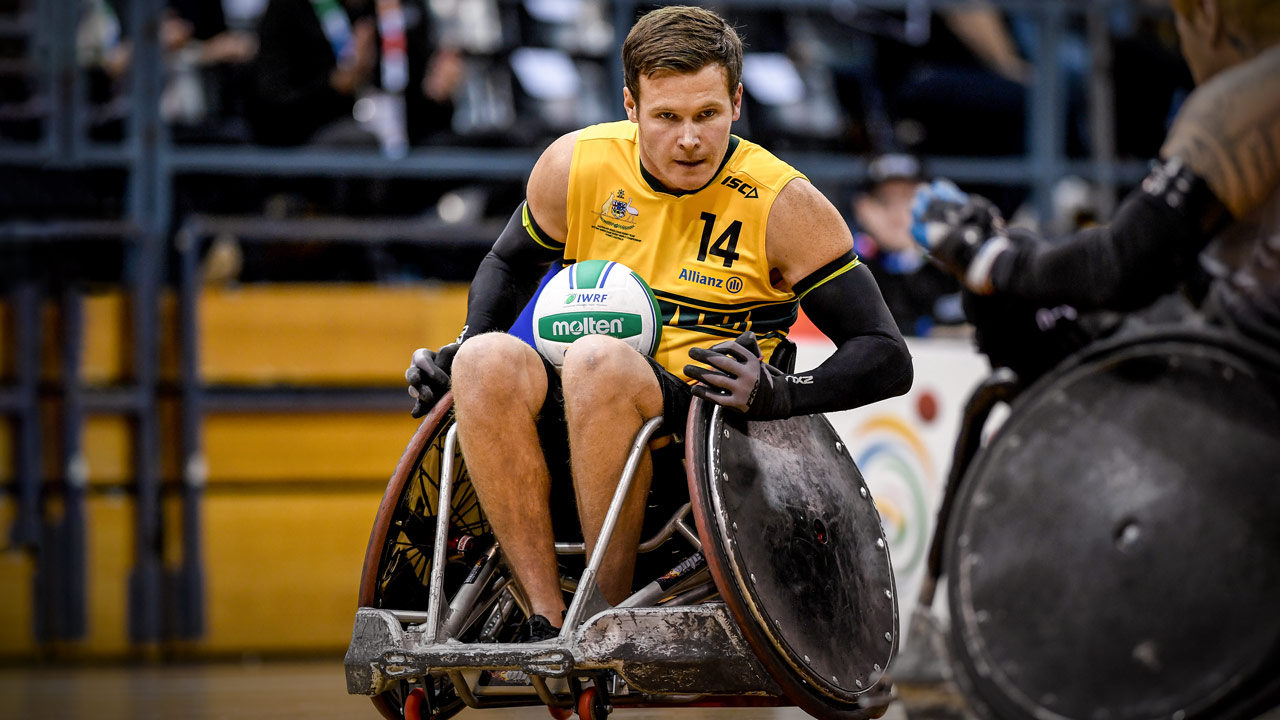 ‘We’ll make it through this’

‘We’ll make it through this’

Those board shorts. More than half my life later, the feeling of devastation at having my boardies cut off me is so clear.

I’d saved up for them. They were so important to me. When I was a 13-year-old boy, those boardies were the coolest thing ever.

They were cut off me after I’d arrived at Prince of Wales Hospital in a brace.

It was a Friday afternoon. My brother Allan and I had rushed down from Mum’s place for an after-school swim at Coogee Beach, despite the weather being a bit rainy.

I threw down my things and ran down to the water, as always, got to about knee level and dived in. The next thing I remember was hearing a pop and seeing a flash.

I couldn’t move. I was face down in the water and struggling for breath. You know that feeling of being unable to wake from a dream?

I thought I was going to drown. A wave crashed and turned me over. I saw the grey sky above, took a breath and was face down again.

Moments passed. I don’t know how many, but my brother ran over, grabbed me under the arms and pulled me out of the water. For some time afterwards, Allan would struggle with the thought that he’d made things worse by grabbing me like that. In truth, he saved my life.

Allan yelled for help. Few people were on the beach, but some came over. I heard them calling to my brother, ‘Don’t move him! Don’t touch him!’

What an over-reaction, I thought. Everything will be fine. I’ll be up in a minute or two. This, despite that I could move only my mouth.

After a few minutes, some off-duty lifeguards came down. I think that was my first inkling there was a problem. The lifeguards looked serious and started doing all the procedures you do with spinal cord injuries, checking if I could feel anything. I couldn’t.

We had a family friend up on the promenade, who’d heard about what was going on and called my mum, who got down to the beach. Dad would come from work in the city afterwards to meet us at the hospital.

I remember the brace being put on me, looking at the grey sky, the ambos taking me away … It was all a bit chaotic.

After looking at the scans, a doctor came out and told my parents straight. My neck was badly broken. The doctor said I’d most likely not walk or have feeling in my arms for the rest of my life.

I guess it was daunting to hear. But, still, the reality wouldn’t sink in. I was so young. I felt invincible. I wasn’t aware of these sorts of things. Surely I’d just get better.

That said, the reaction of my parents suggested something pretty significant had happened. They both broke down straightaway.

It was the start of a long journey for all of us.

I was in traction for two days. That’s where they screw a couple of bolts into your head and use weights to take the pressure off your spine. Two or three days later I was taken into surgery.

My C5 and C6 vertebrae, behind my throat, were shattered. In a seven-hour operation they put some bolts in, took some bone out of my hip and tried to reconstruct the vertebrae. It was apparently the first time they’d attempted that sort of surgery. It was quite overwhelming.

Eventually, my body reached a point where it couldn’t take anymore. I think it was five days later, one night in intensive care, that both my lungs shut down. I was kept alive by ventilator for days afterwards until I began to breathe for myself.

Being unable to move and struggling for breath is a pretty terrible feeling.

Still, the reality wouldn’t sink in. I was so young. I felt invincible. I wasn’t aware of these sorts of things. Surely I’d just get better.

Physically, I was broken. It’s extremely hard to look down and see everything there but accept it doesn’t work. It’s hard to comprehend. Yet, the mental side proved just as tough.

All these people were coming to me every day with ideas and advice. There was so much information to take in. I had to go to rehab everyday, yet needed help just to pick something up or get myself a drink. It was shattering.

My mates came to visit me, but I didn’t want them to see me in a wheelchair. I just wanted to stay in bed. I started saying I wouldn’t get out of bed unless I could push a chair with my own arms.

The next problem was going out in public. The first time I left the hospital, I remember, I was with my mum and a rehab worker, we went to a shopping centre and I pretty much lost it. I felt everyone was staring at me.

There was nowhere to hide. Accepting my new situation was one huge challenge after another.

My family stayed strong. They were always there, particularly my mother, Cathy. Mum kept pushing me, telling me to get out of bed, making me do my physio, telling me I’d be OK.

Mum is a hard-nosed country girl and she’d keep saying, ‘We’ll make it through this. You’re going to have a great life’. She’s the reason I made it through those dark days.

One day, when I was really low, Mum cracked the whip and said, ‘Keep your head up and be proud of yourself, regardless of your situation’.

Mum made me realise that it wasn’t just about me, it was about all of us. My family and my mates wanted to help me through. Mentally and physically, the world was against me but the people around me wouldn’t give up.

Eventually, their efforts helped me turn a corner. I got to a point where I realised things weren’t going to change and started to think, ‘OK, how am I going to get the best out of this?’