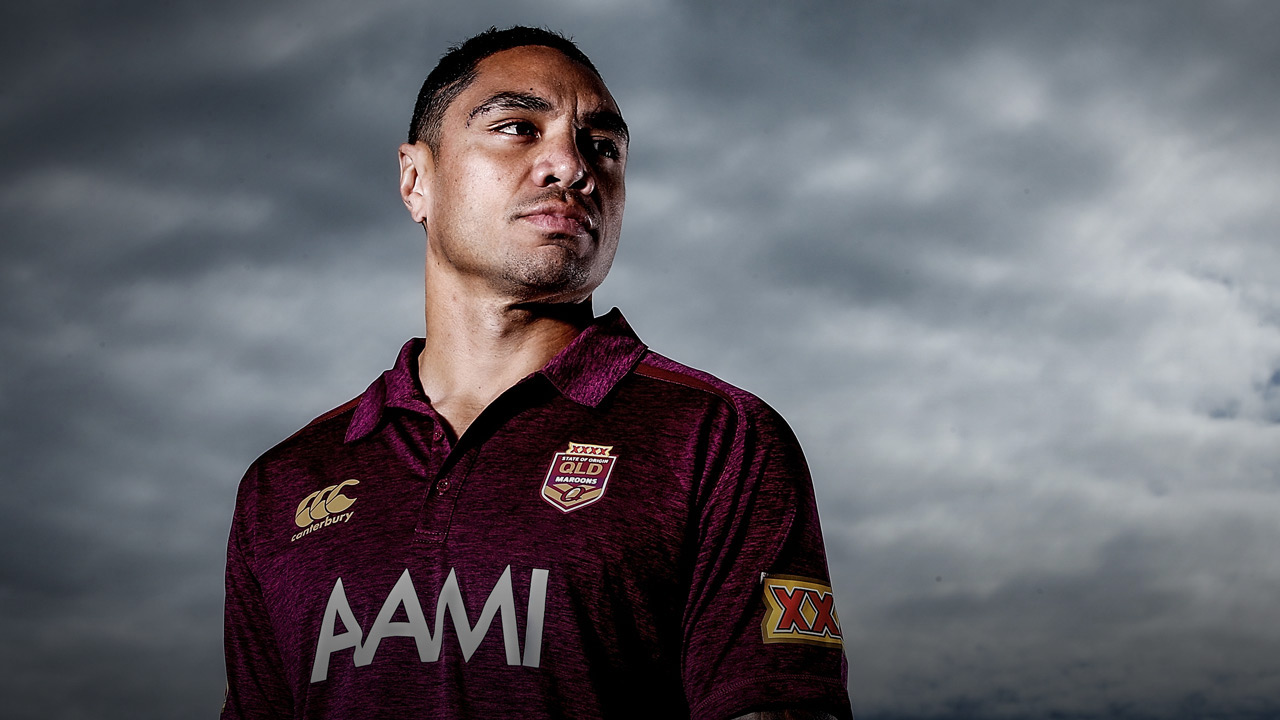 ‘I broke down and started crying’

‘I broke down and started crying’

Willie Tonga played eight State of Origins for Queensland, 12 Tests for Australia and almost 200 NRL games for Parramatta, Canterbury and North Queensland. He talks about a lucky escape with the Maroons, battles with ‘dark days’ and the attempted suicide of his mate in this extract from the Talking with TK Podcast.

There are certain things you remember forever. Good and bad.

The first time I met Mal Meninga was back in 2005 when he and I were special guests at a dinner. He has this aura about him and I remember asking him for a photo.

When I got picked for Origin again in 2009, he was coach and I should have been dropped from that squad.

We went into camp on a Tuesday. Myself and a few other boys went out that night, when we weren’t allowed out. The next day I woke up at someone else’s house.

I looked at my phone and I had 20 missed calls from Steve Walters, the team manager. I got missed calls from Nate Myles. This was around 9 o’clock in the morning, the time we were meant to be on the bus to the airport because the game was in Sydney.

Nate took all my gear and clothes, except for the gear we were meant to wear on the flight. I had someone drive me to the hotel, got into that kit and got to the airport. 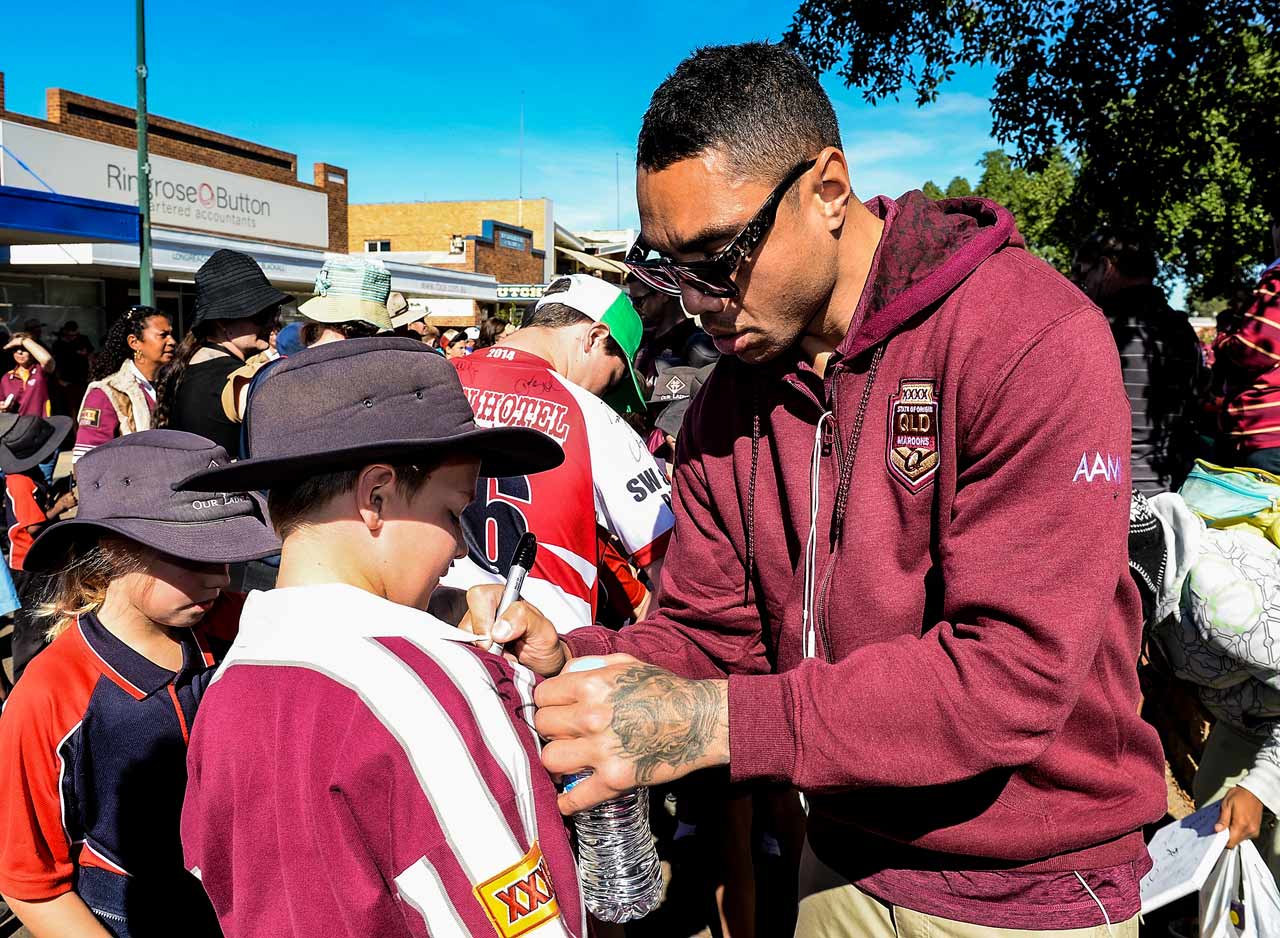 This was the most nervous I’ve ever been. Neil Henry, who was the assistant coach at the time, Billy Johnstone who was the trainer, and Mal were waiting for me. I was expecting to be told I was going back to Townsville.

Mal said, ‘Go and meet the boys and I’ll catch up with you later’. That whole week was one of the scariest weeks I’ve ever had. I had to play a big game. NSW won the first one and I got called in because Justin Hodges had done his hammy. I was called in, I missed the bus and I’d gone out the night before. That was hanging on my head the whole week.

We flew to Sydney and got a bus up to Terrigal. I don’t know what Locky’s thinking, what Petero’s thinking. We were meant to have the day off, but once we got up there we got flogged because me and a few other boys went out.

We went into a room and were asked, ‘Who went out?’ We put our hands up and apologised.

‘Right, everyone put your training kit on, we’re going out to get flogged’.

It was pouring down. The boys would have been hating me. That week I was thinking, if I don’t play a good game that’s it for me. We won that game and Mal picked me for the next one and all three the next year.

I’ve never shared that story publicly, but I can’t thank Mal enough for sticking with me.

ALCOHOL and drugs Were MASSIVE

My dad is Tongan and my mum is Aboriginal and I grew up with my brothers Esi and Sione at Peak Hill near Dubbo, where we were around my Aboriginal family. It wasn’t until later that I learned more about my Tongan heritage and embraced that as well.

When I was 13 we moved to Cherbourg on the Aboriginal mission, where my dad was a pastor.

It was a little odd for him being Tongan, being a pastor of an Aboriginal church. But even now he calls Cherbourg home and wants to move back there from Brisbane. He said when he does pass he wants to be buried in Cherbourg.

That was a big thing for the people up there to embrace him the way they did and embrace us as a family as well. There are boys up there now who I consider to be like my brothers.

For me, one of the biggest eye-openers on the mission, coming from where we had lived and moving up there, was that alcohol was massive, drugs were massive and, it’s sad to say, but domestic violence as well.

These were things I wasn’t brought up around, but to see young girls coming to school with black eyes, women walking around the community with black eyes – but it being a normal thing to everyone else – that was a massive eye-opener to me. I can’t pinpoint one thing I learned but I embraced it and it was a good experience.

IT WOULD HAVE BROKEN A LOT OF KIDS

I moved down to Sydney when I was 17 and a scout had recommended me to Parramatta.

We had friends of the family at Mount Druitt and I moved out there. I’d never caught a bus or a train before. I had to learn that to get to training.

There were a few boys going to Terra Sancta College and they had a good team. There was a TAFE right next to it I was going to, but when I saw the girls at Terra Sancta I asked the officials at Parra to help me repeat Year 12. I was willing to repeat Year 12 just for the girls, but they wouldn’t let me.

I ended up doing a TAFE course with 30- and 40-year-olds which I didn’t finish.

We had to do a presentation at the end but because I was so shy I wouldn’t stand in front of the class. The teacher said, ‘What if we get everyone else to face the back of the class?’ I still couldn’t do it and she said she couldn’t pass me.

I’m still stand-offish and slightly reserved. Esi was at the Bulldogs when I was there and I remember Nate Myles asking us, ‘Were you guys never allowed to talk when you were young?’ I didn’t realise it was that obvious.

Mum and Dad were very strict on us. Looking at kids now and the way they get around and present themselves, you question where has the respect gone, how are they being brought up. 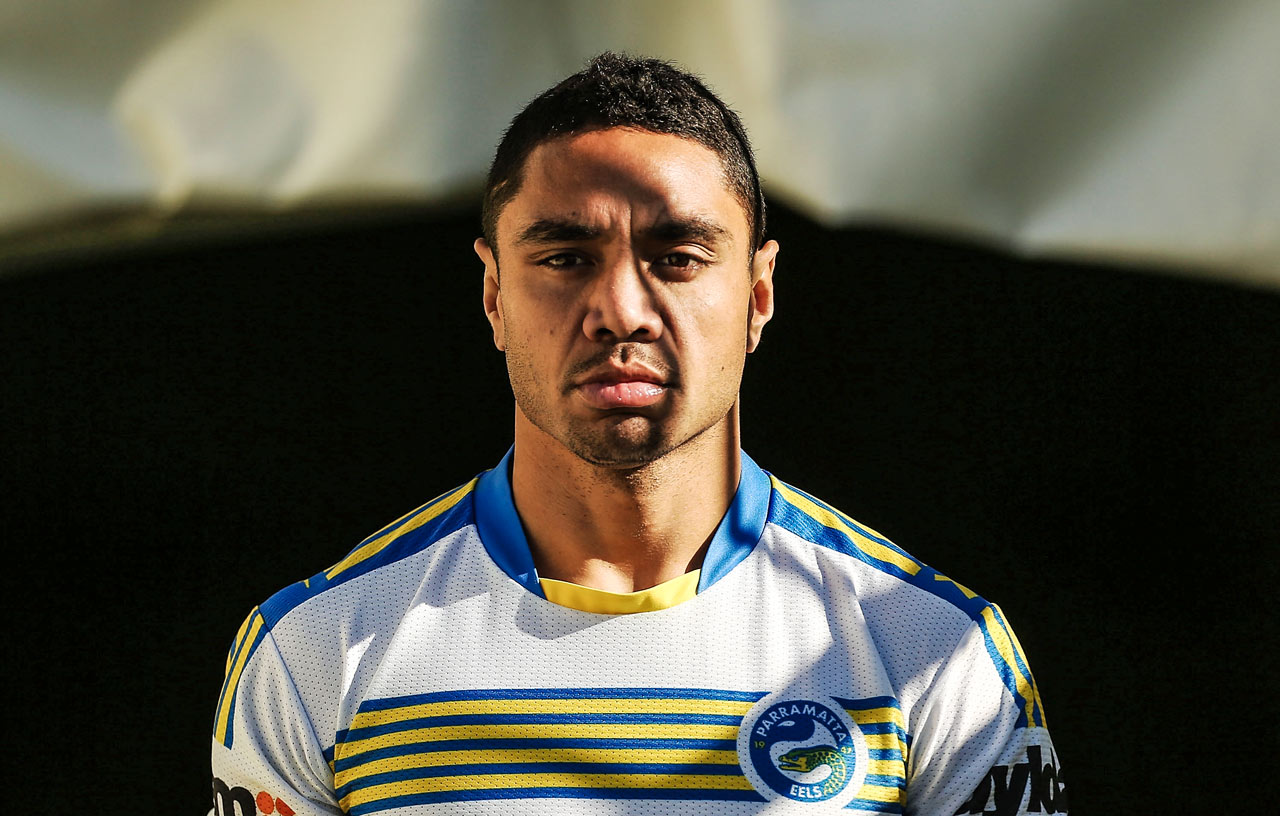 Two weeks after coming to Sydney, I told my mum, ‘I’m not doing it’. I was on the phone crying to her.

She came down to Mount Druitt and stayed with me for a couple of months and told me to stick it out. There were people at Parramatta who were helping me as well, took me under their wing.

The second year, Dean Widders came along. I hung with him the whole time and he got me through that.

It was tough. Brian Smith was hard on me. I have never been scared of a man, other than my old man, more than Brian Smith.

You’ve heard of his mind games. It was like he used to pick me out and pick on me just to test me. I’m thankful now that I didn’t break. It would have broken a lot of kids, especially if you’re shy. That’s why a lot of country boys go back home or don’t make it, they get intimidated.

One time he named me as 18th man to go to the Gold Coast and I rocked up to the stadium with my bag ready to go, and in front of everybody he puts me on the spot. He says, ‘What are you doing here?’ I said, ‘You told me that I’m 18th man’. He said, ‘No, you’re not.’

Wow. As an 18-year-old I’m embarrassed in front of all the boys. They didn’t understand it either because they’d clearly seen me named 18th man.

I have never been scared of a man, other than my old man, more than Brian Smith.

Things like that stick in the back of my mind. I’ve got nothing against Brian, but I’d love to have a conversation with him and ask him why was he like that? Was he trying to test me?

I saw Brian later in France. I never discussed it. There was resentment there. But I wanted to be the bigger man. I went up and shook his hand. When he saw me, he had a smile on his face.

Got injured and was told I’d never make it back again. All of those things inspired me. People telling me I couldn’t do things, to prove them wrong.

The last time I saw Brian when I was at Parramatta he said, ‘If you ever leave you’ll never make first grade’.

He was ruthless. I remember hearing that and thought, ‘I’m going to prove you wrong’. I rang my manager and said, ‘right, let’s do the deal [with the Bulldogs]’.

When the dread sets in

It doesn't matter where rugby takes Ned Hanigan, he's always looking up the weather in Coonamble.

Reality I hadn’t prepared for

Jonathan Goerlach was sitting in a Bondi cafe with his mates when he suffered a panic attack.