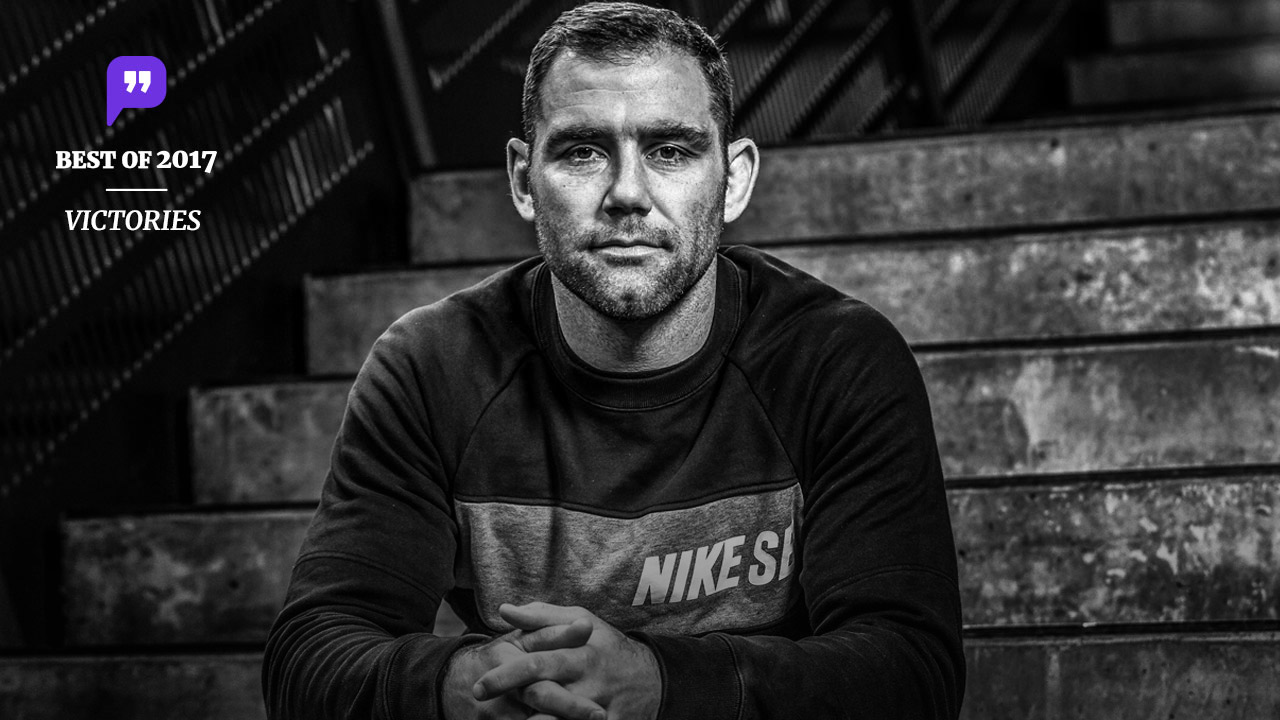 Coops’ impending departure really hit me as the finals got closer; that realisation that we only had a small handful of games left together. I can’t imagine what will go through my mind if he signs with a Sydney club next year and plays against us. It will be one of the strangest things I’ll ever have to face on a footy field, I reckon.

Yep, we’ve seen some great players leave Melbourne over the years. And there’s always that initial weirdness when you play against one of your club teammates at Origin level. But this is completely different. The relationship between Coops, Billy and I goes back so far that I really don’t know what to think about next year.

In a way, I hope he doesn’t play. I just can’t picture him in another jersey, lining up against me. It might happen, I guess. It will be business as usual for that 80 minutes but, gee, it will be weird.

What we have achieved together has been special not only for us, but for the whole game in general. I don’t mean that in an arrogant way. There have been plenty of outstanding players at the Storm outside of Coops, Billy and me.

But Coops and I have played more than 300 games for the one club, and Billy would have been there too if not for the bad injury run he had. We’ve also represented Queensland and Australia together.

We all lived it together. And now a big part of it is almost over.

People forget sometimes the decades and decades of heartache that World Cup qualification brought Australia. I remember. I was a kid when we missed out at the last hurdle to Iran and Uruguay. It wasn’t much fun.

To qualify for our fourth consecutive World Cup, and fifth overall, just shows the progress Australian football has made.

We have a very clear goal in mind now. We want to show the world that Australia is not an underdog nation, that we’re not inferior to others. That’s rubbish.

We’re as capable as anyone of playing an attractive brand of football and taking on the world’s best. Individually, we play in some of the world’s best leagues. And strategically and creatively, Ange and the coaching staff have equipped us to compete with the big guns on the international stage.

We’re going to show the world that Australia is a true football nation. We have big plans for Russia.

I was trying to hold back the tears and stop myself from throwing up. I was so nervous.

You’re thinking to yourself, ‘Fuck, I’m about to win the biggest race of the year.’ You dream of having no one else in front of you for the last couple of laps – and it happened.

That’s why I was so nervous. Your brain goes in these weird cycles. It does backflips on itself. But you’re also trying to drive the car as fast as you can and maintain the gap on everyone else.

Taking that chequered flag was one of the best moments of my life.

At that same Test, we invited Kevin Mitchell Jr and the Gabba groundstaff into the Australian team dressing room for a beer after the last day. This was Kevin’s last Test as curator. We met the whole crew, had some good chats and thanked them for all their help.

On Thursday this week, I was at the airport and a bloke came up to me and showed me a photo on his phone. He said, ‘Do you remember meeting my son? You took a photo with him and the rest of the groundstaff at the Gabba?’

‘He texted me that photo straight after and told me it was the best day of his life,’ he continued. ‘That’s the impact you guys have.’

I had quite a few promotional events I had to attend and I didn’t want Corcoran’s camp finding out about the injury. In a sport like boxing, your opponent is always looking for any little vulnerability they can exploit. A big old cut above the eye certainly falls into that category.

I really didn’t want to be on a stage or venture outside or really be anywhere that people could see me. But there was no choice. I had to front up.

So we had an idea: we would call in a make-up artist to help cover it up.

We did that a few times and word didn’t seem to get out. That was good. Then came a time where I had to be in the same vicinity as my opponent without the assistance of the make-up artist. I asked Jo, my wife, to do her best and put a bit of concealer on my head, but I found out later that they noticed it.

I thought, ‘Damn it, it doesn’t matter now.’ The secret was out.

It’s funny how the flip has kind of become my thing now. I used to look up to athletes who had their own celebrations because it made them stand out. There’s nothing better than watching Tim Cahill box the corner flag after scoring a goal for the Socceroos.

It’s kind of cool that I’m being recognised in the same way.

My friends are a funny group.

They are super proud of what I’ve achieved in the last 12 months but they give me shit about it all the time.

If I don’t reply to their messages quick enough, they tell me that fame has gone to my head. There’s no risk of me getting ahead of myself!

The amazing thing is this club that is the epitome of emotion has reached its first Grand Final in 35 years by not allowing itself to be emotional. The ability to make really analytical decisions in an emotional environment is the key factor in winning a premiership.

When there was a push for change by a group of former players at the end of last season, and president Peggy O’Neal and CEO Brendon Gale fought off the uprising and backed Damien Hardwick as coach, that was a huge show of faith that’s led to where they find themselves this week.

Some things haven’t changed in footy, and behind the scenes it can still feel like you’re in a scene from the old movie The Club with Jack Thompson fighting to keep his job. To hold firm against that wave of emotion is vital to success.