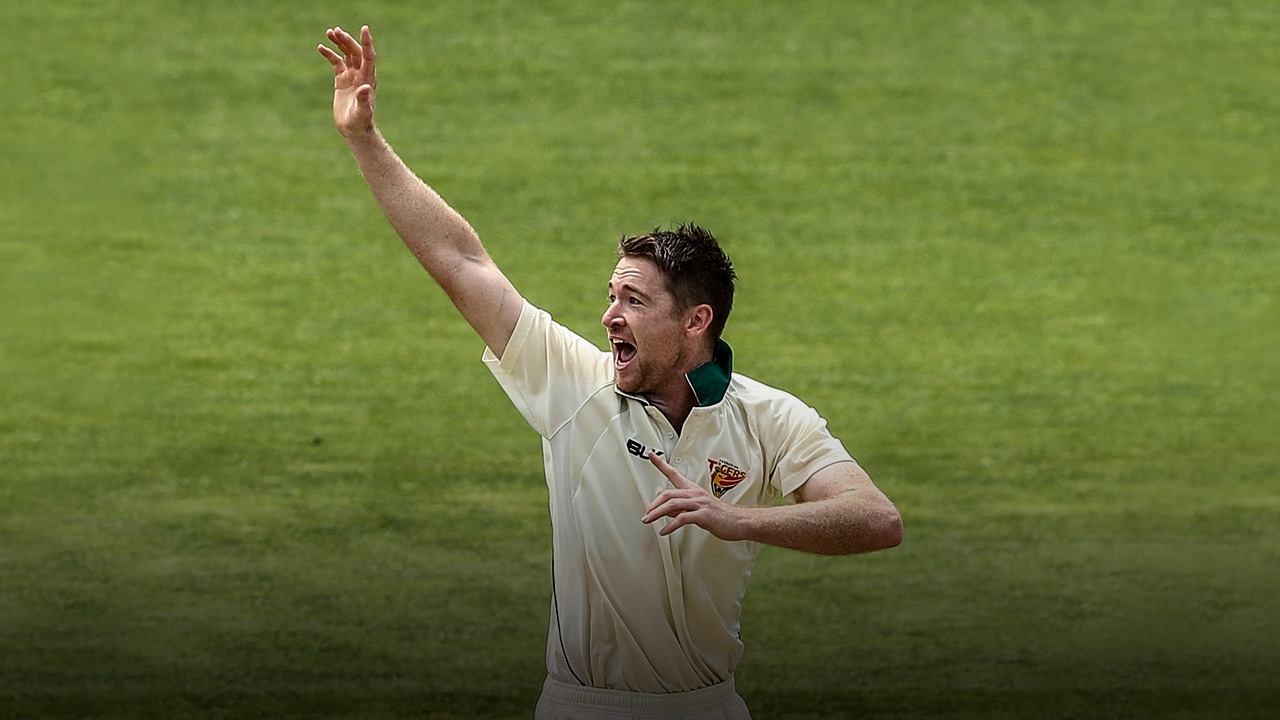 It’s going to be bloody tough

It’s going to be bloody tough

I can’t believe I’m here. That’s probably the easiest way to say it.

This time last year, I had a tab open on the desktop computer at work watching the Sheffield Shield final. A couple of months before that, I was having a few beers at the pub watching the Big Bash final.

Now I’ve played in a Big Bash final and I’m about to play in the Sheffield Shield final for Tasmania against Queensland in Brisbane starting this Friday. It’s surreal, to be honest. I’m just like many, many people across the country who are busting their arse to try and get a gig. Fortunately, my name popped up and I was able to snare a contract, and here I am.

I grew up in Canberra and had to move to Sydney to further my cricketing career. A lot of people make sacrifices and move to try to make a career, so I don’t think I’m anything special in that regard.

I was fortunate enough to have an older brother who had made that move initially, so when it came to me, it was a little bit easier. I lived on res at the Uni of New South Wales and met some fantastic fellas I’m still best mates with. I did two years with UNSW, then two years with the Campbelltown club and then finished off at the mighty Sydney Uni.

While I was playing, I was also doing a secondary teaching degree at UNSW. I finished that off in four years and then got a job up at a school in Killarney Heights in the northern suburbs of Sydney. I was fortunate enough to have an unreal principal there called Hayley Emmerton, who was nice enough to let me go off and play second XI games for the ACT Comets. When I requested six weeks of leave, she didn’t bat an eyelid. She just said, ‘Yep, no worries, make sure your classes are all sorted and ready to go for whoever comes in and fills your place’.

So that was a bit of a weight off the shoulders, I’m very thankful to her for that.

I had a pretty decent year in the second XI with the Comets last year, and then I got the call. I was on my way down to my sister’s wedding at the time, and the call came from Tassie coach Adam Griffith, who said he was pretty interested.

I packed up the ute straight away and came on down. The boat trip can be pretty rough, but there was a fair bit of excitement so I didn’t really give a shit!

This was in May 2017. We started training in June. Fortunately, I was able to put the brakes on the teaching again. I told Hayley I’d be out the door again with only two weeks’ notice, and she said, ‘No worries, get your reports in and off you go’.

That was awesome. The teaching’s now on hold for the moment, and it’s all about cricket. I love teaching, it’s pretty good fun even if it’s bloody tough work. But I got to work with fantastic people and fantastic kids, so I’m looking forward to going back one day soon.

HUNTING AS A PACK

I got my first cap for Tassie in the second game of the Shield season. I think Andrew Fekete went down injured a couple of days beforehand, so I got the call-up to play my debut game.

It was a home game, which was nice, although I actually had a cold. I think I was pretty crook that first game, but you’re never going to say that when someone tells you you’re making your debut. So I sprayed a bit of nasal spray and dropped a couple of Codrals and away we went.

Quite a few things have happened since then. I can hardly remember the first ball I bowled for Tasmania, although I think I got a couple of wickets in the match. I also got 36 batting in the first dig and a duck in the second innings off 30 odd balls. The ball was reverse swinging a bit and we were in a bit of strife, so I had to dig in.

I packed up the ute and came on down. The boat trip can be pretty rough, but there was a fair bit of excitement so I didn’t really give a shit!

The season has gone pretty well for us since then. People have mentioned my figures of 35 wickets at an average of 17 over the course of season and asked me what’s my secret.

That’s an easy one. Having five bloody good bowlers at the other end has a lot to do with it!

The number of maidens and the pressure that gets built by ‘Rainy’ [Sam Rainbird], ‘Belly’ [Gabe Bell], ‘Fekete’ [Andrew Fekete] and ‘Birdy’ [Jackson Bird] is amazing. They build that pressure, and I’m fortunate enough every now and then to come into the attack on the back of that, and hopefully maintain some pressure and take some wickets on the back of the great work that they’ve been doing, round after round.

I know it’s a bit of a cliché to talk about pressure at the other end, but I honestly can’t look past it.

George has also managed the attack really well, so that’s got something to do with it too. And Bellerive is generally known as a seam-friendly wicket as well, so it’s a mixture of all three factors I guess.

As for my bowling, all I can say is I try to bend the back as much as I can, I guess. Generally I want to be swinging the ball away and getting a few nicks where I can, and if it’s not doing too much, I’ll add a few short balls into the mix.

I also work pretty hard on my batting. I try to be an all-rounder and put in the work in both forms of the game. I don’t think I’m hitting the balls as far as Benny Mac [Ben McDermott] would, but at number 8, you’re trying to get as many runs on the board as you can and it was good to get 80 last week to help us through to the Sheffield Shield final.

LOOKING UP TO GEORGE AND JOHN

Our captain George Bailey has been great for us this year. Given his record, everyone in the room looks up to him and respects him, and that respect just grows when we see the way he goes about his training.

George is all about celebrating other people’s success. He has a laugh and treats everyone the same way, and then when it come to training, he works flat out at his own game and is always working to improve.

In my career, I find it hard to single out one mentor as I’ve had many mentors along the way. Some I’ve known for a very long time and are still fortunate enough to receive advice from. More often than not, my brother John has been the catalyst in starting those relationships.

I think my brother going to uni and playing cricket before me has opened up a fair few avenues for me too. He’s a lovely guy, my brother. A lot of people along the way have been willing to help me based on his say so.

John’s a brainiac with the books as well. He’s a pretty well-rounded fella. He’s pretty easy to look up to and try to live up to. The living-up-to aspect still needs a bit of work, but looking up to him is easy!

It’s an exciting feeling coming to the Sheffield Shield final and trying to win Tasmania’s first title since 2012/13 when we beat Queensland in Hobart.

It’s going to be hard to beat the Queenslanders, bloody oath it is. They’re a well-rounded side and they’ve got the home ground advantage. So there’s no lying or getting around that one, it’s going to be bloody tough.

But we’re not going up there with the intention of losing. We’ll put our best foot forward and stick to our plans and have a red hot crack and we’ll see what happens.

We’ve got some very, very experienced cricketers in the side mixed in with a couple of young blokes who are starting to improve massively.

@qldcricket skipper Jimmy Peirson and @crickettas captain George Bailey with the Sheffield Shield! The Final starts at 10am on Friday at Brisbane's AB Field – live and free via @cricketcomau, entry by gold coin donation to @alannahmadeline.

As I said at the start, sometimes I really can’t believe I’m here. I had a few moments in the Big Bash this year – especially being a bowler where you’re fielding at fine leg a fair bit of the time and you’re almost in the seats – just these moments when you can almost literally sit back and take it all in.

A couple of people have asked me how I have handled the nerves and emotions and stuff. I guess my response is that there are not many times in life where you get that high, that mix of nerves and excitement and fear and happiness.

Overall, it’s been a really comfortable setting to come into here at Tasmania. I’m just trying to do my part every game and stay in the XI, and we’ve been winning some games, which is awesome.

I just hope we can win one more.