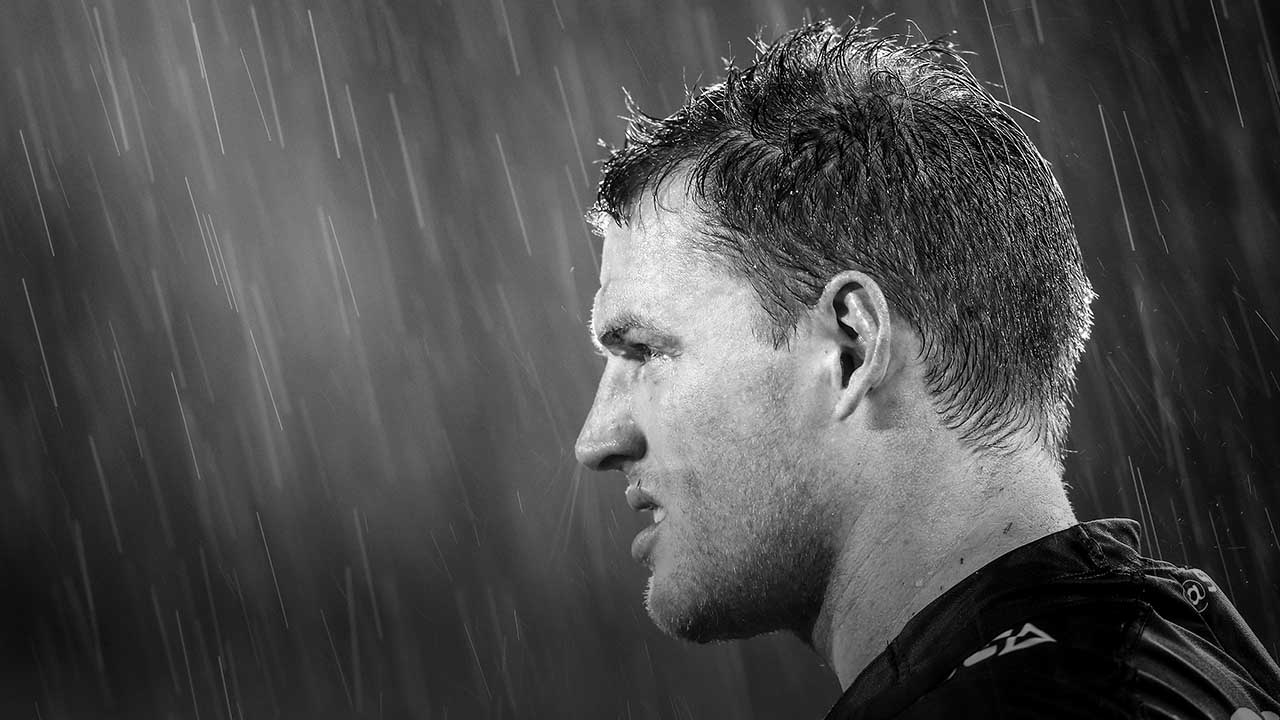 A career that almost wasn’t

A career that almost wasn’t

‘Why did Queensland select this NRL nobody?’

That was one of the headlines published when I was named to make my Origin debut for Queensland this year.

My Mum and Dad were pretty upset when they saw it. My wife Casey didn’t like it. Craig Bellamy and a few media commentators weren’t happy, either.

Me? I just thought it was funny.

For so much of my adult life, I didn’t think I would be an NRL player either, much less an Origin representative and a bloke playing back-to-back Grand Finals.

I worked as a teacher’s aide and a trainee financial planner. I once turned down the chance to do a pre-season with the Broncos because I couldn’t afford to take 10 weeks off work. I had a mortgage on a house, a career and was nearly finished a uni degree.

I was ready for a life in Rockhampton.

But here’s the funny thing: when I was called up for Queensland, I wasn’t totally surprised. Everyone was speaking about my selection like it was way out of the blue. In one sense it was: I hadn’t been getting spoken about by the media. But I had been in the emerging Origin squad for a few years. And I’d sat down with Kevvie Walters and he’d given me some good feedback.

When Kevvie called me up, it was one of the best days of my life.

So, how does a bloke who never really thought he’d play in the NRL end up being part of successful Queensland and Melbourne squads?

THE OPPORTUNITY I DIDN’T SEE COMING

I loved playing league and soccer growing up in Rockhampton. It wasn’t really a career thing, or a burning desire to go pro. It was just about enjoyment. So when Penrith started showing some interest in me, we were all a bit surprised.

Allan Gainey, who is still my manager, got me that first chance. He saw me playing at the state titles in Toowoomba when I was 15 and he put me on the Panthers’ radar.

The club sent up a weights program and training program so I knew there was a chance. A year or so later I was invited down for a trial game and it all went from there. I just jumped at the opportunity.

My Dad used to work in Gladstone and I remember him sending me an email with my flights and itinerary. I dug up that email recently, it was pretty special to look back on that time. You can just tell how pumped and nervous he was for me.

Dad never once put pressure on me though, he was just excited because it was such a cool opportunity. He told me to play my normal game and enjoy it. He was babbling on with advice, I think he was more nervous than me.

I travelled down to Sydney with another fella from Rocky named Travis Marshall. We’d played together before, so I knew him, but the team we were trialling with was fairly well established.

They all knew each other and we were just meeting them for the first time when we arrived to warm up. That made me nervous but I was just keen to have a game.

They ended up offering me a two-year contract.

I was excited about the opportunity but I was also just a young kid moving down to Sydney. I was very fortunate that Casey, my partner, was able to come down with me, so I had that immediate support.

We didn’t have a lot of money and lived in this shabby little apartment near the stadium. It was tough going. You’re used to seeing your friends all the time and then all of a sudden you can’t, so you miss them a lot. You miss your family as well.

We quite often think back on that time. I worked as a teacher’s aide and Casey worked as a barista while she studied at uni. I also started studying a bachelor of financial planning.

We were struggling financially but didn’t want to ask our parents for help. We wanted to do it by ourselves. It makes us very grateful now. Whenever we’re trying to make a tough decision we just remind ourselves of what we went through in Penrith.

In terms of the footy, I lost a bit of confidence in Penrith. I didn’t particularly love my time there, or how I played. I spent a season in the SG Ball and then a year in the Toyota Cup. It wasn’t until I moved back to Queensland that I got my confidence back.

THE END OF THE DREAM … FOR NOW

I never expected an NRL contract, but when I wasn’t offered one I definitely thought that dream was over. I had two options – I could stay in Penrith and play NSW Cup, getting match payments, or I could go back home and play Queensland Cup. We decided it was time to go home.

We were quite excited to be heading back to Rocky. We’d missed it a lot. It was disappointing that footy hadn’t worked out for me but we were keen to get back to our family and friends and start a life. I was ready to focus on a new career.

I was hoping to get a full-time job and study by distance. It worked out well, a job came up as a trainee financial planner. The firm said they would employ me three days a week and they wanted me to keep working on my degree.

For so much of my adult life, I didn’t think I would be an NRL player either, much less an Origin representative and a bloke playing back-to-back Grand Finals.

If I’m honest, I was a bit iffy about how I’d go in the Queensland Cup. In that first pre-season we were training every Saturday and Sunday.

One of the things I’d been most excited about was hanging out with my friends more but with all the training, I wasn’t able to go out much. I didn’t even think I was going to make the team so I was tempted to just stop and play local club footy.

My life could have turned out so differently. One night my brother was out in the backyard having some drinks with mates but I had training early in the morning. I said goodnight to them and went to bed but I really wanted to stay.

I asked Casey, ‘What am I doing?’ and she just told me to stick it out for a bit longer, finish pre-season and see what I thought then.

I’m so grateful I followed her advice. I had a really good coach who helped me get my confidence back and I ended up getting a run in the first round. I never missed a game in three years.

I was preparing for a life in Rocky. We saved up for a deposit and bought a house. We moved in and started some renovations, got two dogs. We were very settled and happy. I got back to enjoying my footy.

It was after my second year that the Broncos asked me to do a pre-season with them. As I said, I had to say no to them, which was really disappointing.

THE STORM & THE BIG OPPORTUNITY

When the Storm said they wanted to sign me, it was a surprise. Paul Bunn, who is a recruiter for the club, got in touch and asked if I’d be interested in coming down.

They offered me a two-year deal. It was such an exciting opportunity that had some security around it as well – there was no hesitation whatsoever.

Casey and I aren’t afraid to give something a go. We certainly liked our lives in Rocky but we were keen to give it a crack and see what happened.

I was preparing for a life in Rocky. We saved up for a deposit and bought a house. We moved in and started some renovations, got two dogs. We were very settled and happy.

It was an opportunity with a club that had a great reputation. What’s the worst that could happen? We have to move back to Rocky? Well, we certainly weren’t worried about that.

I joined the team after they had won the 2012 premiership. I did that first pre-season and got a big boost when they named the squad for the World Club Challenge.

A couple of boys had been injured so the club decided to name an extended 21-man squad. One player would miss out and I knew it would be me but it was recognition that I wasn’t too far off the mark. They were impressed by how I’d been performing.

I’ve always been a no-frills player. That’s never changed. But Craig Bellamy, the other coaches and my teammates reinforced the work ethic and high standards that you need to hold yourself to. Attention to detail is the biggest thing.

I kept pushing for selection and was eventually handed my debut in round 16 against the Tigers. I was 24 years old and it was awesome – to be able to tell Casey, my parents, family and friends that I was going to be playing NRL.

I owe a heap to everyone at the Storm. Everything changed when I came to Melbourne. They kicked my NRL career off. It’s a really special place and I’ve made some fantastic friends.

A BIG END TO A MASSIVE YEAR

We’ve done so much hard work after losing the Grand Final last year. We were two points away from winning a premiership, which was a special achievement but also incredibly disappointing.

Nothing can change what happened against the Sharks but that loss is in the back of my mind. Being so close to winning hurts. I just want to get back there and have another crack.

This year, we’ve put ourselves in a great position. We’ve got a fantastic opportunity to do something really special as a group. But the job’s not done, anything can happen on Sunday. I don’t want to waste this chance.

I know a lot of people have been surprised by the Cowboys’ charge. I’m not one of them. Don’t get me wrong – making the Grand Final from eighth place is a massive achievement. But I’ve looked at them before every finals game they’ve played and thought, ‘They’re a big chance here.’

Sometimes, when I take moment, I think back about how things have worked out.

A bloke who didn’t think he would play in the NRL has ended up being part of a Maroons squad that won an Origin decider in front of a heaving Suncorp Stadium, and now has a chance to play in back-to-back Grand Finals.

I’m grateful to have been part of it all.