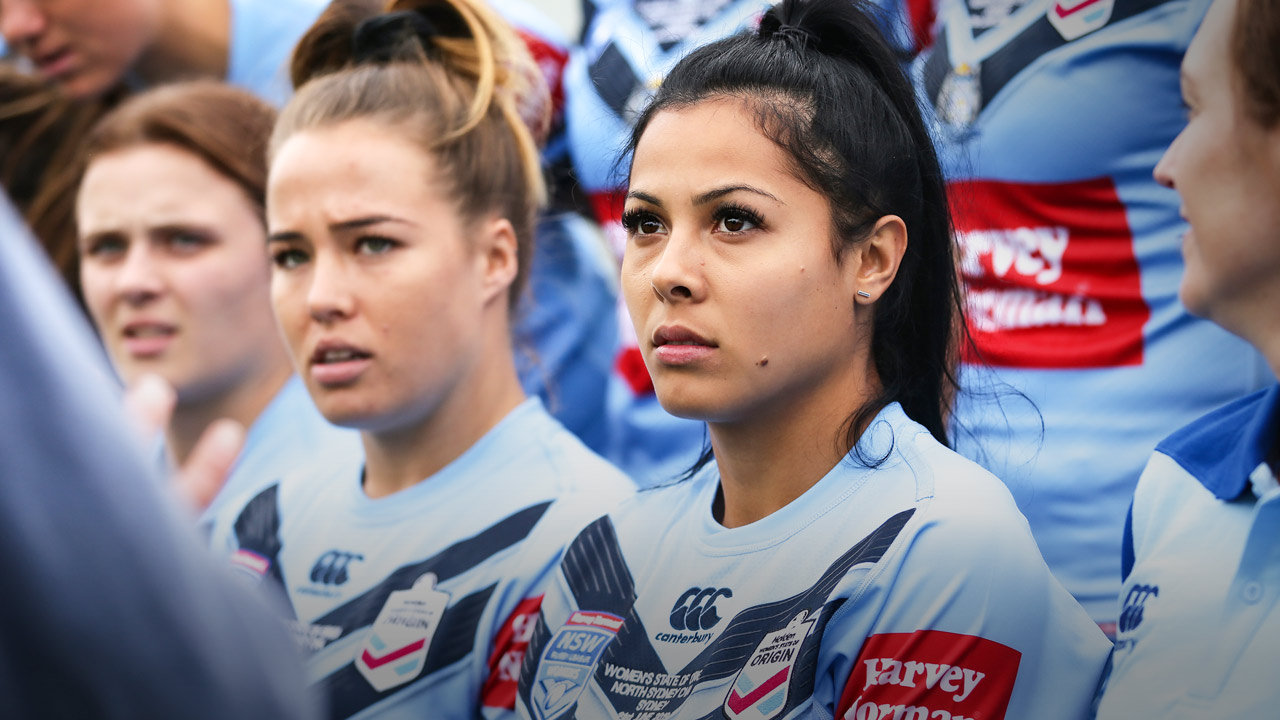 I know he’s with me every day

I know he’s with me every day

When I got dropped off into camp for my first State of Origin game this week, it felt like my first day at school. Even though I knew a lot of the girls and we’d trained the previous Sunday, I just felt super nervous.

As the youngest-ever Australian to play at a rugby sevens world series event, people might see me as a rugby league convert. But that’s not right and nerves are nothing to do with that.

Rugby league has been with me from the start. Playing juniors for La Perouse, growing up in an extended family of diehard South Sydney fans, I got dragged along to Rabbitohs games and grew up as a massive Blues supporter cheering from the couch with my mum and dad and siblings.

My mum Renee, my No.1 supporter, will watch me run out against Queensland in my first Origin game. My dad Solomon, who was murdered in 2008, will be right there with me too.

I know he’s with me every day and the energy I feel from him, I know he’s happy and proud of where I am and the decisions I’ve made and what I’m achieving.

My dad was a massive fan of league and union. He played rugby for Tonga a long time ago and then league for Maroubra, and I remember being a little girl on the sidelines with my mum watching him play for the last team he would ever play for.

When I take the field I carry part of him with me. At the end of 2017, I got a band around my thigh. A special piece and the only tattoo I have, that honours my family and where we’ve had to come from.

Dad went out that night and never came home.

Happy Birthday to my old man, who would've been 45 today. Can't believe 8 birthdays have passed without you. I hope you're having a few pure blondes up there to celebrate ? we love and miss you so much ❤️?? #96

Because of what happened I never got to see the finished piece. One of my uncles got a replica tattoo, including the names of my mum, dad and the kids.

After Dad passed, Mum went to the same artist and told him, ‘I want a piece of Solomon’s tattoo as a band around my thigh just so I can have a piece of him wherever I go for the rest of my life’. She got all our names on the bottom of hers in a band.

I was 12 when Dad passed. From that day, I knew that when I came of age I wanted the same thing. I wanted a piece of his tattoo and a piece of Mum’s as well.

When I was old enough, I reached out to the same guy. I said, ‘I’m not sure if you remember who I am, Solomon’s eldest’. He said, ‘I know exactly who you are – how’s your mum, how’s everyone doing?’

He was visiting Sydney from New Zealand and I showed him what he had done for my mum and dad, and he just freehand drew a piece that has part of his and part of hers as my own thigh band.

Not a lot of people know what the story is behind it and I don’t usually tell them unless they ask.

On the front of the band, on my thigh, is a shield which represents my dad, the shield of the family. There are turtle trails which represent the journey I’ve been on in life.

And there are Tongan flowers, one for each of my siblings. They are the big ones that mean everything to me.

A MASSIVE TEST OF CHARACTER

My rugby sevens journey ended in heartbreak. If I’m being brutally honest, it’s one of the lowest points of my life.

My first ACL rupture happened when I was 17 at the Sevens World Cup in 2013. That was a massive shock to the system. The worst I’d had suffered was a sprained ankle before that.

It was huge to be 17 years old and alone rehabbing in Sydney. My family had moved to Queensland but I had chosen to stay in Sydney to pursue sevens.

That was a massive test of character and it took about 11 months to get back.

About 18 months after that, I ruptured the same knee as a 19-year-old and that was heartbreaking for me, as it was so close to the qualifications for the Rio Olympics.

I had nine months this time and tried desperately to get back. The doc and medical team pushed me as far as they could to see if I could get over to Rio. It got to a stage where it was getting worse and there was floating cartilage they needed to get rid of, so they made the call.

I was ruled out of the Olympics a week before the team left for preparation camp.

I had dedicated my whole life from such a young age to reach that point, only to let it slip through my fingers. I still cry talking about it.

It wasn’t hard watching them play and win the gold medal. It was just hard coping with not being there.

I was over the moon for the girls, knowing how much sweat and tears had gone into that in the years prior. I knew I had been a big part of that before they went, so to not share in it was heartbreaking.

At any event like an Olympics, you see the top one per cent who get the opportunity to go and play or compete. You don’t see the 99 per cent who have worked their arses off to get there and who just fell short.

I tried to stick around. I gave an interview just after Rio where I talked about Tokyo 2020.

My head was still in the game and I was still contracted and I acknowledged 2020 was a long way away and it was about ticking off boxes along the way.

In the off-season of 2017, around June, I had a hard think. I had been 50-50 and I had a long chat to my mum. Some guidance and wisdom from her put things into perspective about life. That there is more to life than just playing rugby. That I’m still young and have the ability and tenacity to get back if I wanted to.

I came back from a holiday in Europe after the world series and decided to make one of the biggest decisions of my life. I had a meeting with my coach and handed my resignation letter in.

There was a sense of happiness when I made the decision because I’d been pondering over it for a year.

It took me 12 months to come to the realisation my heart wasn’t in it. I like to think of myself as quite resilient especially with what I had overcome at a young age.

But having so many injuries brought me to my decision. Every month I was out of the game, the game was rapidly growing and so were my teammates.

I was playing catch-up. I had to learn how to walk again. Run again. Jump again. All those fundamental concepts of playing sport.

I was struggling to find the motivation to be there every day and perform at that elite level. A sevens program is very taxing on the mind and body and unless you’re prepared to give it 110 per cent then you won’t last.

I could feel I was starting to fall away, more mentally than anything.

I decided to step away from the sport and footy altogether. I felt I lost the spark and motivation for footy that I had. I felt that, if I was to play footy again, I needed to be playing for the reasons I took it up in the first place.