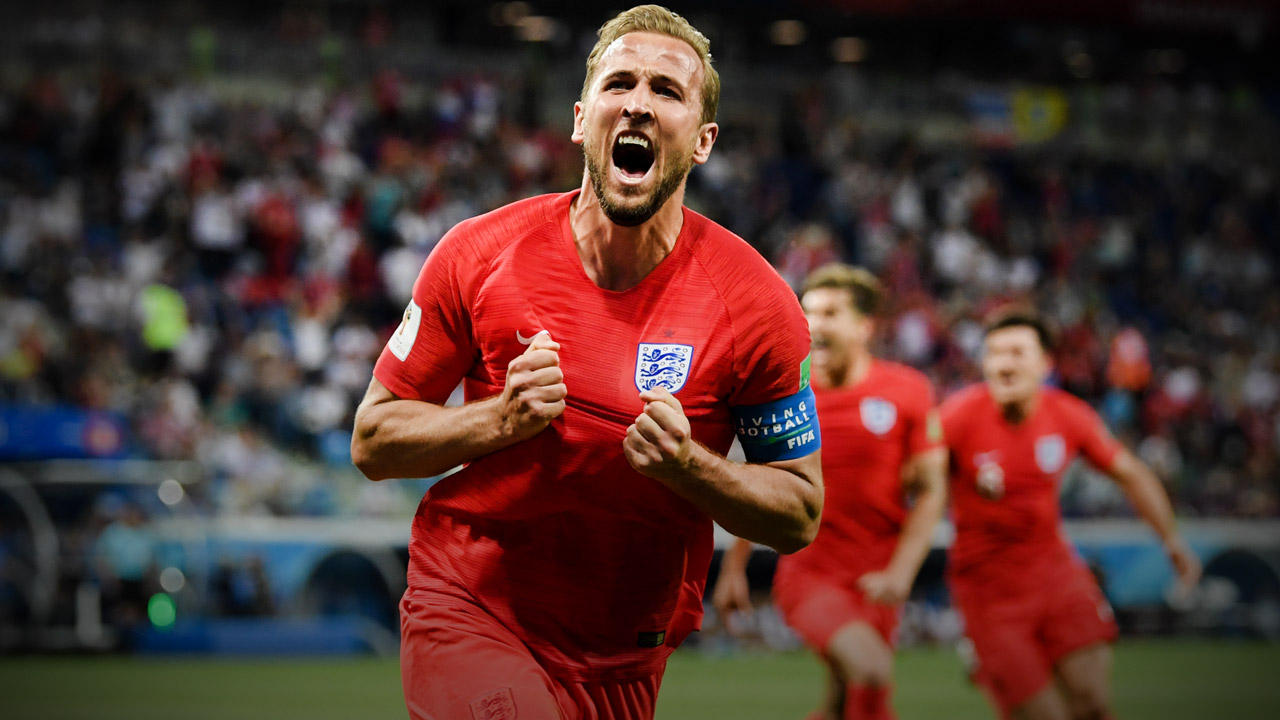 It reminded me of Bologna in 1990 and another World Cup knockout match. I was the England captain back then and we’d just beaten Belgium 1-0 after David Platt scored an incredible volley in the final minute of extra-time.

You might have seen the photo of Chris Waddle and I after the match, dancing on the pitch with our arms in the air. It has become quite an iconic image.

I never expected to see that moment recreated in such a manner, so many years later, in Samara.

The media reported that it was a tribute to us, but I don’t think that was actually the case. Those men danced for another reason – and it means a whole lot more.

This is my take on it.

On that night in Bologna, I remember looking up into the stands and seeing the English fans dance. I wanted to be one of them, celebrating a monumental win. In that moment, I felt truly connected to the entire country. I joined in their dance.

Stones, Walker and Lingard did the same thing, for the same reason. And, for the first time since 1990, I think an English team feels connected to the public in the same way my team did.

Gareth Southgate is the man who has made that possible.

Before he took over, we had a run of managers that just didn’t get it. Our England players were cordoned off from the public and built up to be gods. Everyday people couldn’t relate.

Sven-Göran Eriksson never understood the connection between the fans and the team. Then Fabio Capello treated the players in a way that made them feel isolated from the outside world. All those years fostered an unhealthy us-versus-them divide between the team and the English public.

Gareth has broken down those barriers. He made the England team human again.

He’s encouraged the players to communicate honestly with the fans and we’ve seen them become more comfortable at letting their guard down to share personal stories. Everyone loves that. He also allows them to go over to the fans after games and speak to them on the sidelines. That wasn’t really done before.

We all feel like we know the squad now and what they’ve been through. They’re just regular guys. That’s why everyone believes in this team. The way they have conducted themselves has united a nation.

“Can you ask the neighbours to put the bins out on Monday? We’re not going home just yet” ???????

England fans don’t have a lot of good memories when it comes to international tournaments. Aside from 1966, it’s been a whole lot of heartbreak (especially in shootouts). Everyone remembers Gazza’s tears in 1990, when West Germany beat us on penalties in the semi-final. We’ve all felt like that many times.

The weight of our history was like carrying Antarctica on your shoulders. It was an awful burden and you could see how it weighed on the players, especially when we were knocked out in the group stage in 2014.

Gareth was clever. When he came in he said, ‘Forget history. Learn from it but then forget it. What you want to do is make your own history.’

The England team have certainly done that in this tournament.

After we won the shootout against Colombia – our first at a World Cup – I felt cleansed. I felt as though that group of players had washed away all the crap that we have endured over the last 28 years.

During my time with the national team, we didn’t achieve what we wanted to. But we certainly flew the flag with pride. My first World Cup was in 1982. We were unbeaten and still went out of the tournament; another one of those heartbreaks.

Now we’ve won that shootout, I’ll be fine if our match against Croatia goes to penalties. The monkey is off our backs.

We’ve watched this team grow as the tournament has gone on. Before the opening game against Tunisia, only five or six of our players had been to a World Cup before. And none of them had ever won a World Cup match.

That could make a team play cautiously but, instead, England’s football has been free of fear. They’re playing a lovely blend of football, passing the ball out from the back, getting it down on the deck and knocking it around.

Their movement is good, and they work hard for each other.

There is a steel in this team.

Above all else, they just look to be really enjoying themselves. Everyone has a smile on their face. They’re loving the work and reaping the rewards. I think they’ve got a very good chance of winning the World Cup if they can get past Croatia in the semi-final.

The guys who have impressed me most are the two Harrys.

I thought our centre-back Harry Maguire might struggle with the pace, decision-making and mental side of a World Cup. But he’s coped very well and scored the opening goal against Sweden with a cracking header. That showed his desire to make a difference.

The captain, Harry Kane, has been magnificent as well, scoring important goals when it matters.

And as I mentioned earlier, when it comes to penalty shootouts, a lot of star-studded England teams have wilted and cracked under the pressure. This team didn’t.  That mental strength, unity and spirit is what I’ve been most proud of.

I felt cleansed. I felt as though that group of players had washed away all the crap that we have endured over the last 28 years.

It feels like a new dawn for English football.

There is a word of caution, though: 1990 felt like a new dawn as well. That quickly faded. Sir Bobby Robson had already been told that his contract wouldn’t be renewed after the tournament. We changed the manager and didn’t even qualify for the World Cup in 1994.

That can’t happen again. I don’t think it will.

This time, what Gareth has done is set a precedent and structure for how England should conduct itself on the world stage. For me, that’s more exciting than getting to a World Cup semi-final.

I don’t think this will be just a flash in the pan for us, because at long last we have a blueprint that can take England back into the top 10 and give us sustained success at the highest level.

Gareth has the chance to leave that legacy.

I played in 14 World Cup matches over eight years, but perhaps the most defining moment of my career came in a qualifier against Sweden in 1989 when I cut my head open.

They stitched me up at halftime but as I played on and kept heading the ball, it opened right back up again. The blood soaked through the bandages and ran down my face.

By the end of the match, my shirt was almost completely red.

It didn’t mean much to me at the time. Back then, it was a routine thing to play on when you were hurt or bleeding. But for everyone else it was something special. Looking back now, I’m very proud as well. That’s the kind of player I wanted to be.

That shirt and the three lions meant everything to me. They still do.

You can see that passion in all the fans when they sing Football’s Coming Home.

That song started as a marketing campaign for the European Championships in 1996, which England were hosting. It became so much more.

It reverberated around Wembley when England beat Spain in the quarter-final penalty shootout. That really was the last time we got to properly sing it. Gareth Southgate missed the penalty in the semi-final shootout against Germany and we were out.

It sends a tingle right through my whole body every time I hear it now. It’s the soul of English fans and cuts to the heart of how we feel. After years of anguish, football is coming back into the hearts of English fans.

And ahead of this semi-final against Croatia, it is an open invitation to all of England.

Come and join us.

We want them to go all the way. And I think they can.