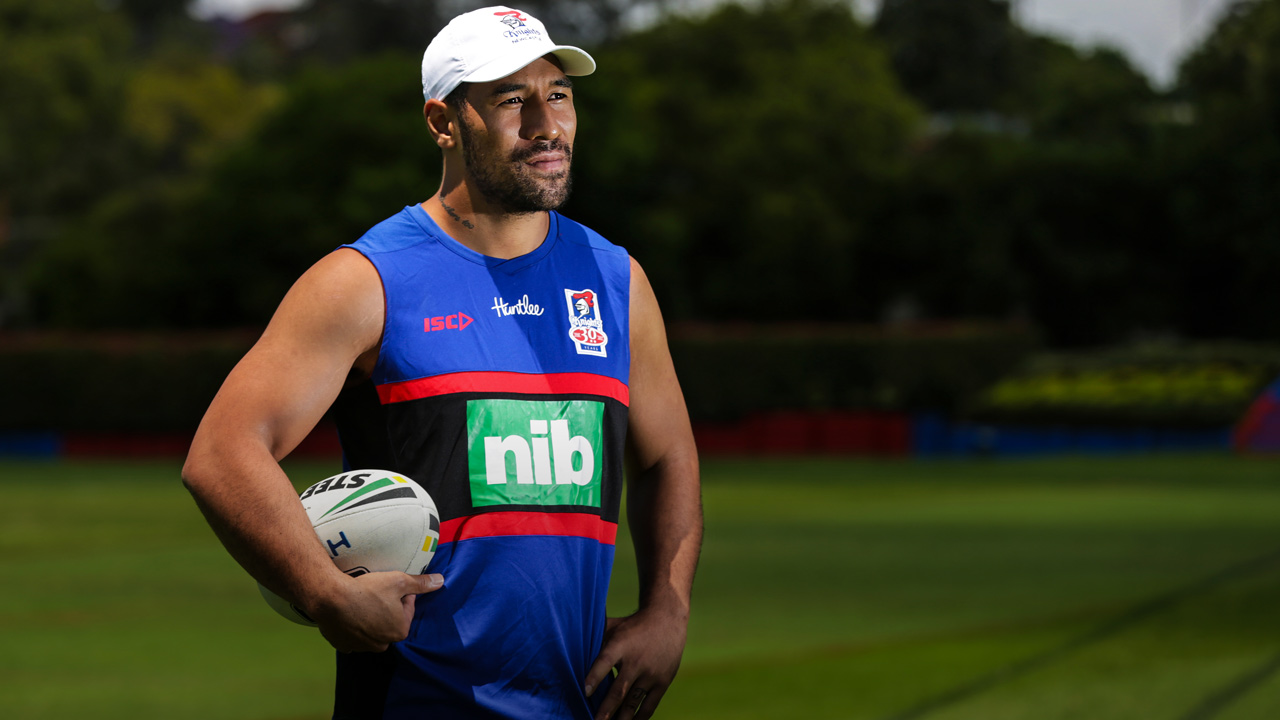 These are the days you live for

These are the days you live for

It was the week of my debut with the Knights and all the rooms of our Warners Bay house were full. Some guests slept on couches. Others used fold-down beds set up on the floor.

I didn’t get the chance to do an actual headcount. Too much was going on at the time. There were 18, maybe 20 people staying with us. Friends and relatives had come from all over. My in-laws were there, as were my mum and my sisters. Lots of my first cousins had made the trip down from Brisbane.

The place was packed.

The first reason everyone had come to stay with us was to celebrate my daughter Zara’s first birthday. The other was to watch my first game for Newcastle.

It was special for all of us. It turned out to be a very memorable night.

Mum, my wife and a few cousins came to the game while the others stayed home to watch it on the box. After Mitchell Pearce slotted that field goal everyone – at the stadium and, I’m told, at home – went crazy. There can’t be too many more dramatic ways to start a season than a golden point win over Manly. I’m not sure Zara got much sleep!

I’ve played at Townsville and in Brisbane where the home crowds are incredible, but this was something else. In Newcastle, they truly love their rugby league. They live for and love their Knights.

It felt like finals footy, the intensity of the game, how fast it was. It went right down to the wire. We were exhausted but we had to go the extra mile.

Things were a little different in our second game down at Canberra but, again, the boys had to dig deep and we came up with another big result. There is an air of self-belief in the team. With everyone working so hard, the rewards are coming.

It’s still early days. We won’t always get it right. But we have a great launching pad for the year.

These are the times you really value in rugby league. Everywhere you look, everywhere you go, people are smiling. Life doesn’t get much better.

It isn’t always like this. As great as the highs are in this game, the lows can be almost unbearable. I have gone through three knee reconstructions. Those experiences pushed me to the edge.

I was very young the first time it happened. It would be just like any other injury, I thought. I’d bounce back straightaway after having the operation and doing the rehab.

I took it much harder the second time around.

It was 2013 and I was playing in the Roosters’ top grade. During the rehab, I was putting a mask over my face. I’d go to training and tell the boys ‘I’m all good’. But I wasn’t.

My world came crashing down. I was in all sorts. There was pain, tears of frustration, and it got pretty dark. I became lost and wasn’t on top of my rehab.

I wasn’t just asking if I could go on with the game. It was worse. I was asking a million questions. Why me? Why now? I hated the world.

Toni was my girlfriend back then and she is my wife now. She convinced me I could play again. She backed me, kept pushing me through it. She was full of hope and encouragement when I had very little of either inside me.

I confided in my mum as well. She was calm and reassuring. I’ll never be able to thank the women in my life enough.

My third ACL was pretty much a freak accident. I was playing in a Tonga-Samoa Test at Cbus Super Stadium and attempted a try-saving tackle on Sika Manu, who had broken the line.

I was playing fullback and thought he was going to run over me but he ended up diving down low near the line, clipped my knee and it had happened again.

I was asking a million questions. Why me? Why now? I hated the world.

This time, though, I felt equipped to deal with it all.

Maybe I can use the benefit of those experiences. I heard that Sam McKendry from the Panthers suffered his third ACL on Sunday. I sent him a text.

I told him to stick at it, work hard to get it right and get back to playing. I told him anything is possible and I firmly believe that as long as he has a good support system, he’ll be fine.

We actually spoke on the phone last Monday. Sam was preparing to have a talk to his surgeon and wanted some background. I think he wanted to prepare a few questions. I don’t know Sam, we’ve never met. I just wanted to make sure he was in the right frame of mind.

He appreciated it and I’m sure he’ll be OK.

I am still only 24, but Newcastle is my fourth NRL club. It’s been six years since my first grade debut, but the Manly game was only my 60th first grade appearance.

I can see now, with the benefit of hindsight, how those injuries have shaped my life and career.

I thought I’d never leave the Roosters. They picked me in their junior academy when I was 16 years old and things went well, at least for a while.

I scored plenty of tries in the Under 20s in 2011 and there was a bit of hype when I was given a taste of first grade the following year.

With some early success came the thought that things would be fine from here on. Then I suffered my first knee injury. And then another. It ended up being a long and painful road back and it was tough getting a look-in at the Roosters. Their roster was so strong.

I was offered a spot at the Cowboys by Paul Green, who had coached me in the under 20s at the Roosters. I decided to give it my best shot.

They used me pretty much as a fill-in player in Townsville. That was understandable. North Queensland had a lot of great players and I was a young bloke on the road back from major surgery. I guess I was also a bit down in confidence.

But fate is a funny thing. I met Pete Nolan, the football manager for the Brisbane Broncos, after the Cowboys’ semi-final in 2016.

Pete immediately struck me as a good person and very knowledgeable. We had never met before but he knew all about me. He said he appreciated the frustrations I was going through after enjoying a successful career in juniors.

He told me there was an opening at the Broncos and made me feel comfortable very quickly – not just about potentially moving to a third club but, most importantly, about doing well there.

The Brisbane experience was amazing. Pete gave me heaps of confidence and a genuine belief in myself. After all I had been through, I needed someone to believe I could still make it.

Wayne Bennett was also awesome. He was a mentor for me and has had a significant influence on lots of players’ lives, on and off the footy field. Wayne helped me get things going again. I learned a lot from him.

The 2017 season at the Broncos was my best so far. So why did I leave?

Firstly, the opportunity to be part of the new Knights line-up was exciting. Something really good is happening here. You can feel it. We have heaps of new players at the club and, naturally, combinations won’t happen overnight.

I’ve played at Townsville and in Brisbane where the home crowds are incredible, but this was something else. In Newcastle, they truly love their rugby league.

We were far from perfect in the Manly and Canberra games but there have been encouraging signs. We feel we’re building up to something pretty special.

Another major factor was that Toni’s parents live in Sydney, just a couple of hours from where we now live. She’s much happier we are based in the Hunter with our support group not far away.

We love the city. You drive to training, go out for dinner or the local shops and people come up and say, ‘Welcome to Newy!’ It makes newcomers like us feel great.

At the moment, I’m focusing hard on finding my feet with the Knights.

My goal is to try and get my hands on the ball more. I want to really put my name out there this season. Hopefully I’m doing that.

It was a great feeling getting across the line last Sunday for a try against the Raiders. I’m finding my feet and getting on the scoresheet is another sign that I’m heading in the right direction.

Before signing off, I’d like to make a couple more observations about the Knights.

Nathan Brown has been enormous getting everyone together in a short space of time. He’s got great ideas on the game and how we should play it. After several tough seasons finishing down the bottom of the ladder, Brownie has worked incredibly hard to rebuild the team. He hasn’t shirked the hard stuff. He deserves every success that comes his way.

Kalyn Ponga did some nice things against the Sea Eagles – but he has only scratched the surface. KP turned plenty of heads with another big contribution against Canberra.

He’s a freak and good at everything!

We had a Knights golf day recently. He won it. I’d heard he was a pretty handy golfer in his younger days and he has clearly not lost his skills. The boys who played in his group that day said he was something else.

We all look at the stuff he does at training, stand back and think, ‘How can anyone do that?’

There’s no doubt Kalyn is one of a kind. It’s rare to see someone with anything like his level of talent. I was with Johnno Thurston at Townsville and Ponga is like him in many ways.

He’ll have a big impact on the game, especially at Newcastle. We’re very lucky to have him.

Another big key for our team is Mitchell Pearce. When the Knights announced he was coming here, I thought he was the perfect choice. He’s a really solid and clever halfback who will give the team great direction.

I made my debut with him at the Roosters in 2012. His game has gone to another level since then. He’s our captain now and a very good leader. The way he goes about his life, his training, is super professional.

As you can probably tell, I’m excited about my move to Newcastle and what the team can achieve.

There’s another big game for us this weekend against the Roosters. A lot of the players in our team came from there and it will be great to run out and compete with the boys against the old club.