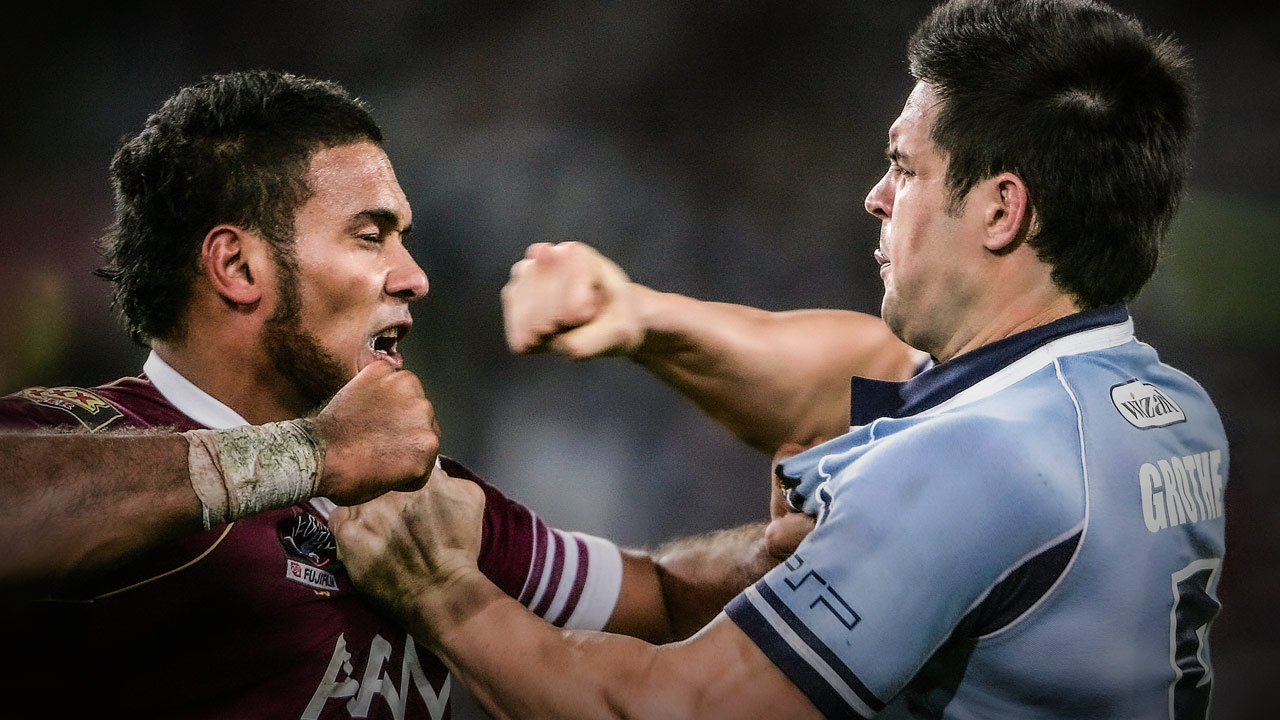 A bit of spice with my footy

A bit of spice with my footy

When I first started playing for NSW in State of Origin, it was a fight for the first 30 minutes and then a game of footy broke out.

I’d grown up thinking that was how footy was played because that’s what I saw when I watched it as a kid. That’s why I played the way I did. It was just the way it was back then, you know? That’s how you’d try to upset the opposition.

It’s a confrontational game. It’s about trying to get on top of your opponent and, if a blue broke out, you were in there.

Take the second game of the 1984 Origin series at the SCG. We won the toss and kicked off. We knew what was going to happen. There was going to be a stink.

Gene Miles got the ball for Queensland. It was only the second tackle and he was shaping to kick early, but he got rushed and then it was on. I was in the thick of it. So were plenty of others.

Barry Gomersall was refereeing. He never worried too much about that stuff. The touch judges would run on and The Grasshopper would say: ‘Oh, let ‘em go. They’ll be puffed out in a few secs.’

Those days are gone and I miss ‘em, but I’m not dumb. I know it’s never going to be that way again. The world has changed.

Don’t get me wrong, I still love the game as much as I ever did. It’s still a tough man’s sport. I love the physicality of it. The blokes playing are heavier, stronger and faster, so the collisions are bigger. I love the skill coming off the back of the physical stuff.

But I still prefer a bit of spice with my footy.

That’s why I enjoyed it so much when Tom Burgess and Daniel Saifiti went at it in the Souths-Newcastle game the other week. It’s so rare these days, because it’s a different game and a different attitude. Different rules.

I get howled down for it, people say I’m a dinosaur, but I thought it was good. Like I said – and a lot of people don’t understand this – we’re playing a confrontational game and tempers are going to fray. Things are going to happen.

You can’t play a collision sport and not expect blokes to get angry.

I ended up playing Test matches against the Poms myself, but before that, when I was a kid, my old man would wake me in the middle of the night to watch Australia play England on Kangaroo tours. I’d sit down in front of the TV excited because I knew it would be tough.

You knew it would be on.

The way it is now, with throwing a punch being outlawed or you’ll end up in the sin bin and maybe suspended, gee, there’s a lot of brave blokes trying stuff on knowing they won’t get whacked.

The example I make is Johnathan Thurston slapping Beau Scott in an Origin game a few years ago. Would he have done that if you were allowed to retaliate? I don’t think so. Thurston’s not silly.

I was commentating on that Souths-Newcastle game for Fox League. I got up out of my seat, mate.

I don’t mean the headbutting. I got done for headbutting myself, so I can’t blow up too much at blokes for that, but I’m not condoning it. I’m talking about two blokes going at it and having a stink using their fists. One on one. No-one got hurt.

I love the skill coming off the back of the physical stuff. But I still prefer a bit of spice with my footy.

It’s a thing we had different to the AFL, but now we’ve sort of gone down the same track as them. Grabbing their jumper and shoving it in their face, or whatever it is they do.

The way I see it, things can erupt sometimes and I don’t think we should concentrate so hard on holding it back. It’s like driving a racing car and they say you’re only allowed to go 100 kilometres an hour. Well, what’s the use of having a racing car. You know what I mean?

I go to the game to see confrontation. Not fighting necessarily, but I love watching a player like Sam Burgess. He makes it personal to go after the number one forward in the other side and I think that’s why he’s the best forward in the game.

Sam sails close to the wind sometimes, but he has to, if he’s going to do his job.

I reckon if you did a case study on everyone who watched that Souths-Newcastle game, a high percentage would’ve liked what happened.

The people in authority say, ‘Oh you can’t do it, you can’t promote violence’, and all that sort of stuff, but it wasn’t that dramatic.

As long as it’s just two blokes going at it, face to face, not blokes running third man in from the side, or elbowing, or gouging. Two blokes, toe to toe. Like Gomersall said, they’ll run out of gas pretty soon anyway.

I remember going to Las Vegas to watch Buster Douglas fight in a heavyweight boxing match. My lovely wife, Cath, bought me the ticket. I’ll have to repay her one day! But about half the audience were women and they loved it. Two big blokes just going at it.

I spoke to a couple of female friends after the Souths-Newcastle game and they enjoyed it. It’s a bit of a novelty these days, a stink.

But the counter to that is, our game’s so tough a lot of the mothers who like watching footy and maybe don’t even mind seeing the occasional stink don’t want their sons to play because they think they’re going to get hurt. So I get that it’s a tricky situation.

I just think it would be better if there was a bit more understanding and a bit less over-reaction if a few punches are thrown. I reckon deep down a lot of other people feel the same way.

I’m not trying to encourage it, I’m just saying that in the heat of the moment, in a confrontational game, things happen and you should make some allowances for that. It won’t happen, of course. The game won’t go in reverse. But I’m just saying.

Origin is still the most-watched show on TV though. People want to see two teams going at it as hard as they can and as fast as they can and Origin’s got all of that. It’s the best against the best, but even more than that I think people appreciate the physical side of it.