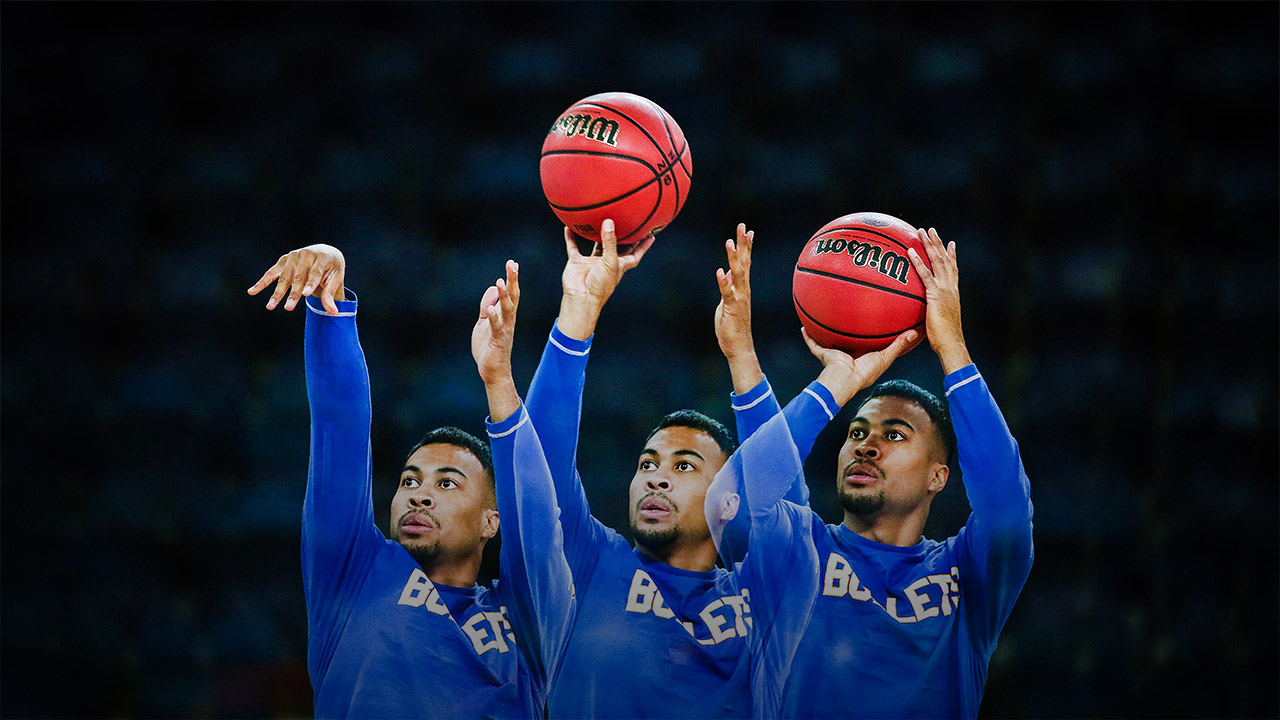 The last thing I expected when I started my college basketball career as a young man from Oregon was to be playing for a team with a big Australian influence.

You might have heard of Saint Mary’s. If you haven’t, it’s the college that produced Patty Mills and Matthew Dellavedova and many other great Australian players.

The campus is located in a small town called Moraga in California but there’s an Aussie flag hanging on the back wall of the basketball arena.

The team is known as the Gaels and they’ve had at least one Aussie on the roster for every season since 2001.

When I first started at St Mary’s, there were four Aussies on the team – Delly, Mitch Young, Clint Steindl and Jordy Page. I had to pick up some new lingo pretty quickly. I had no idea what ‘arvo’ meant or how ‘what’s on?’ means ‘what are you doing?’.

There’s also an Aussie tradition that they’ve adopted and it sets St Mary’s apart from every other college in the US.

In Australian culture, teams will get back to the locker room after they win a game and sing a song together – you see it all the time in the AFL. In America, we don’t really do that.

When I first got to experience that celebration at St Mary’s, I thought it was so cool. I still remember all the words but I can’t share the song with you because it’s a secret held by just the past and present players.

I think it really builds team unity. Everyone is on such a high from getting the win and it’s a great way to celebrate that achievement together.

You just don’t see it in the NBA or at other colleges.

Since those days, I’ve spent time playing in Spain, Andorra and the Czech Republic. They don’t really do it over there either. European fans always have plenty of songs but us players never had anything that we could sing together.

Now, I’m back playing in Australia for the second time – this time with the Brisbane Bullets. I missed singing team songs a lot, so to be back around that vibe feels special.

Delly is my guy.

I went to his wedding last year and it was incredible to see how far he has come since those college years. It’s so crazy for me to be here in Australia now, watching him play in the NBA for Milwaukee.

Everyone from Saint Mary’s is proud of him and everything that he has achieved. We were really happy for him when he went on that run with Cleveland in the 2014-15 playoffs. He made a name for himself.

We text each other a bit, checking in, keeping up-to-date with how we’re each going with our careers. He has earned everything he has achieved and it goes to show that when an opportunity knocks, you’ve got to be ready to take advantage of it.

I’m still waiting for my opportunity. I know I’ve got to be ready.

Adam Caporn and Marty Clarke are two other Aussies who have had a massive impact on my career. They were part of the coaching staff at St Mary’s during my time there.

Those two guys have helped me a lot behind the scenes and given coaches feedback which has helped get me opportunities with Melbourne United and now with the Bullets.

That’s how it all unfolded with this move to Brisbane.

I loved my time in Melbourne and I would have been happy going back there, especially after we came so close to winning the championship in 2016.

The Bullets were the first Australian club to show interest in me this time around.

I had a few phone calls with Andrej Lemanis, who really sold the move to me. He told me about his vision of where he wanted to take the program and it was something that I wanted to be a part of.

When I was last playing in the league the Bullets weren’t even around but Andrej is a great coach and he is determined to transform the team into a championship contender. We’ve got a long way to go but we’re on our way.

That’s why I’m here, to help change the culture. As an import, I’m here to lead by example and sacrifice for the betterment of the team.

It’s also been great to be back playing with two of my former teammates, Mitch Young from college and Daniel Kickert from Melbourne. They’ve really made me feel at home.

When I first started at St Mary’s there were four Aussies on the team – Delly, Mitch Young, Clint Steindl and Jordy Page. I had to pick up some new lingo pretty quickly. I had no idea what ‘arvo’ meant, or how ‘what’s on?’ means ‘what are you doing?’.

On the court, pride is on the line in every single game now. There are no excuses. We have to go out there and play our hardest. We’ve got to come in with the right mindset and attitude to finish the season off the right way.

The NBL has grown a lot in the two years since I was last playing in Australia.

The competition is of a higher standard and the difference between the top teams and bottom teams is a lot smaller now. The decision to add a third import spot has had a lot to do with that.

Compared to what I’ve played in Europe, the standard is pretty much the same. This is my fourth year as a professional, and all I want is to play against quality opposition week in, week out. That’s what the NBL has to offer.

The overall branding has changed as well. The social media campaigns are really good and we’ve been much more visible on TV.

You can definitely see a growth in attendance at arenas around the country.

I’m glad that I’ve been given the chance to leave a small footprint on this big journey Australian basketball is on.

I’ve been very fortunate to have played in some great leagues around the world. I feel like every step of the way I’ve had to earn my keep. Nothing has been handed to me.

As an import playing in other countries, you learn quickly that you’ve got to be mentally tough. There’s so much responsibility to perform every single night.

At times, it gets really stressful but the next day you might feel like you’re on top of the world. You can never let yourself get too high or too low. You have to keep it even keel.

It’s cutthroat in Australia – if you’re not playing well you’ll get replaced – but I feel it’s even more ruthless in Europe. We practise more over there as well. It’s twice a day, on top of the time you spend in the gym.

So far, the toughest place for me to live and play was in the Czech Republic. I played for a club called Basketball Nymburk, which is a small town about 40 minutes outside Prague.

The language barrier made it hard off the court and there were high expectations on the court.

The club won the league 14 times in a row and have a history of playing in the Champions League, travelling all over Europe. That’s the level below the EuroLeague and it’s quite a high standard.

It’s cutthroat in Australia – if you’re not playing well you’ll get replaced – but I feel it’s even more ruthless in Europe. We practise more over there as well. It’s twice a day, on top of the time you spend in the gym.

There’s a lot of pressure that comes with playing for a club like that. You don’t want to be part of the group that ruins the streak. I’m happy we were able to keep it going.

The town really celebrates their team. That’s another difference between Australia and Europe. Fans over there have always got drums and instruments playing throughout games. They’re a lot more rowdy.

It was like that when I was with Basket Zaragoza and Andorra, playing in the Spanish Liga ACB.

I’ve played against Real Madrid, which was very cool. They have incredible support and some of the best players, including Sergio Llull who is probably the best point guard in all of Europe.

It’s been great to have these experiences but at first it was tough living away from home. I’ve learned that you have to push yourself to get out of your comfort zone and immerse yourself in the local culture.

A lot of players can’t make it overseas, which is why they give up and go home. But I know that playing well over here can help me get back to America, without having to give up on my dreams.

NEXT STOP: THE WORLD

I’m only 25. I haven’t reached my full potential yet and my goals are still high.

I want to show the whole world what I can do.

I still want to play in the NBA and the EuroLeague. I’ve done some NBA training camps before and played Summer League with the Hawks. I feel like I have the ability to make the jump up to that level.

Australia is a great stepping stone for that. Playing for Melbourne helped me reach Spain, which is one of the best leagues in Europe. I’m just trying to use this season as another stepping stone.

If I can’t reach my goals, that’s just the way it goes. I’m still very fortunate to play in a great league like the NBL.