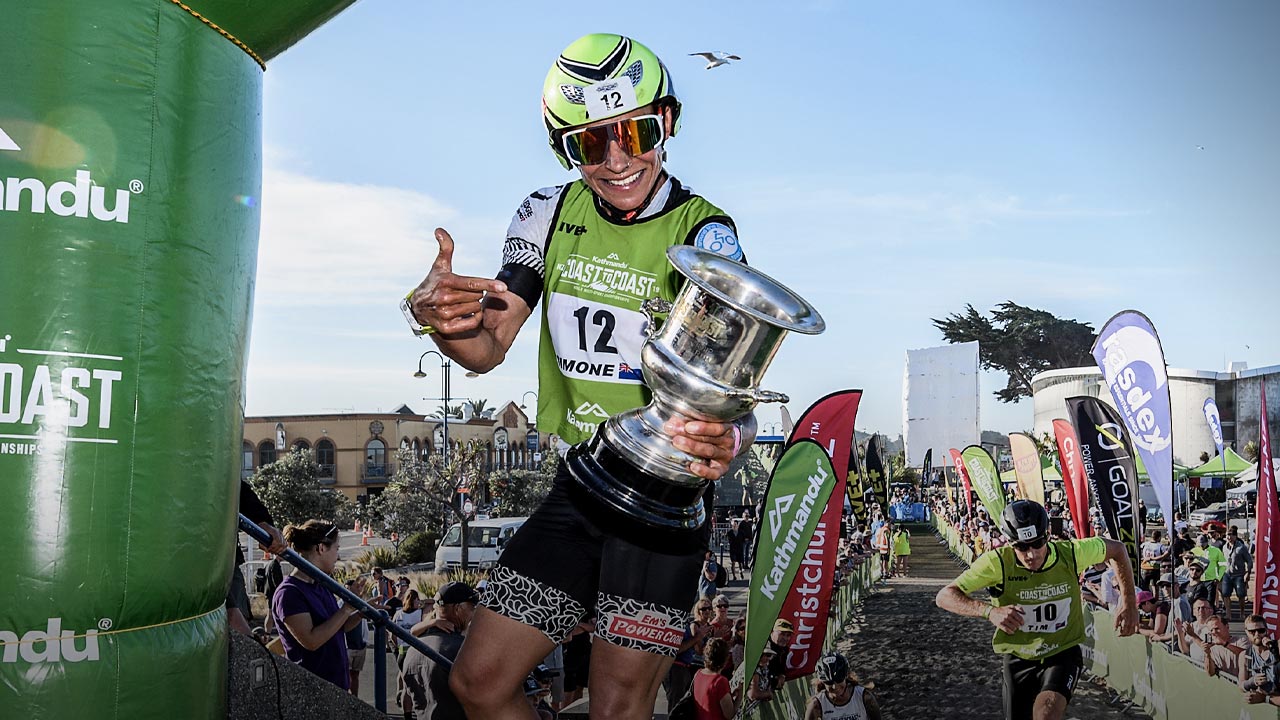 You probably haven’t heard of me or my sport.

But, here in New Zealand and a few other countries, multisport is quite a big thing and the Coast to Coast race, which I won this year, is an iconic event, the world championship of our sport.

It’s hard. Very hard. A 243-kilometre physical and mental test. Starting at Kumara Beach on the west coast of the South Island, you run 2.5kms to your bike and ride for 55 kms to the foothills of the Alps.

The race is mental. I did it in just under 13 hours. Along the way, I got a time penalty and crashed into a car. Winning was one of the great achievements of my life.

Lots of memories came up for me when I crossed the line. As a child, all I wanted to do was be an athlete. I was very active and always wanted to train and race.

My parents didn’t support me. ‘You can’t be an athlete. You need a job’, they said. Living in a small town of 800 people near the Black Forest in south-western Germany meant I needed someone to drive me to places to train with squads or coaches, but I didn’t have that.

Sport stayed important to me. I was good at it and it became my way of getting attention. People would say they were proud and it was the only place I heard those words.

However, as the years went by, I lost contact with sport. The void was filled with struggle. It was filled with nightmares and horrible memories. With anorexia. With fear and sadness.

When I finally became reacquainted with sport, it was more than just doing what I loved, it actually saved my life.

Why I’m telling my story

After I won the Coast to Coast I was interviewed by a German reporter who had discovered a little about my past.

The headline became something like ‘Sexual assault survivor becomes world champion’. But there’s so much more to it than that.

I want the story to come out properly. I want people who can relate to my experience to know they can still have a good life and achieve their dreams.

Often we don’t talk about the kinds of things I went through. But I’m not embarrassed anymore. I worked through a lot in my time and I think it’s important to talk about these things. It happens too much.

Victims shouldn’t blame themselves or feel they can’t talk about it. If you’ve had trauma, it will always be there but time will allow you the chance for a new life.

I never thought I could have a boyfriend or relationship, but now I’m with the most wonderful man. He is so kind and loving. I’ve travelled the world and learnt so much.

If the past hadn’t happened the way it did, I might not be living in this beautiful country, being an athlete like I always wanted and winning races.

Life is hard. Nothing comes easily. But it’s so amazing when you work at it and come out the other side.

I thought I was quite a happy young person, for the most part. But that all changed when I was 14.

I was playing basketball with some friends and my boyfriend – my first – reached over me from behind to try to stop the ball getting to me. That movement triggered something in my mind.

I began to see images of an old man holding a similar pose over me. Day by day, more pictures came to my mind, through the day and in my dreams.

Every time I came close to a guy, I would freak out and become really anxious. Very quickly I became a bundle of sadness and depression.

My family doesn’t talk about things much. We would never discuss how we feel or anything like that, so my mother wasn’t really someone I could tell about the problem I was having.

Finally, I tried to kill myself, which I think was more of a scream for help than a wish to die. That, too, backfired because my friends were told by their parents to stay away from me.

Eventually, my dad said, ‘We’re worried about you. I think you need to talk to your mother’. That night I was crying and my mother finally asked what was going on.

I unleashed and told her about everything that was going on in my head. She confirmed that, when I was four or five, I told her that a neighbour had done things to me.

I remembered that this man next door, who we used to call ‘grandpa’, had looked after us at times. He would do these weird things, touch me and whatever else, then give me lollies and tell me it was our secret.

We were quite new to the area and my parents didn’t want trouble. They shut themselves off from it, swept it under the carpet. They just told us not to go over anymore to see this man.

It’s always been hard for me to understand that. I’ve thought for a long time, ‘Why would you protect someone who took over your child like that?’ Maybe I’ll never understand it.

Collapsed at a club

As a 14-year-old, dealing with these memories alone became impossible. I couldn’t express my feelings to anyone and didn’t know where to turn.

I started cutting myself with glass. I would hyperventilate, which some people said was just me trying to get attention.

I was put in touch with a psychologist, who confronted my mother, but that backfired because my parents punished me for speaking about it.

Finally, one day I tried to kill myself, which I think was more of a scream for help than a wish to die. That, too, backfired because my friends were told by their parents to stay away from me, that I was a bad influence.

Every time I tried to reach out, it seemed to become a bigger problem.

My life and my body felt out of control and one way I could get that back was to start throwing up. I know it sounds weird, but doing it gave me a little high for a while each time.

I’d finished school at 15 and was working as an apprentice in a bakery at the time, which probably didn’t help.

My throwing up quickly turned into an eating disorder, anorexia and bulimia, which I lived with for the next three years. Throughout those years my whole day would revolve around how I could throw up, where could I do it, when could I do it.

I wouldn’t go out with friends because I was worried I wouldn’t be able to go somewhere and not be sick.

My body was going downhill. I had issues with my organs and had to be on lots of medication. Then, one day I saw a friend who had just started a relationship and was very happy with her life and it struck a chord with me.

It gave me some hope, some desire to find that kind of happiness. I remember thinking to myself that I could either die or keep fighting to get out of this situation.

I knew I couldn’t do it on my own. So I got in touch with a lady who could help me get into rehab. My mother didn’t want me to do it, but my boss at the bakery knew I needed to.

He said he backed me up and I could come back to continue the apprenticeship whenever I wanted. I’ll never forget his support.

While that process was going on, I was out one night with friends and collapsed in a club. Straight afterwards, the day before New Year’s Eve 1997, I was sent to rehab, where I stayed for most of the next year.

My weight dropped to just 35 kilograms. But I now had the chance to start a new life.