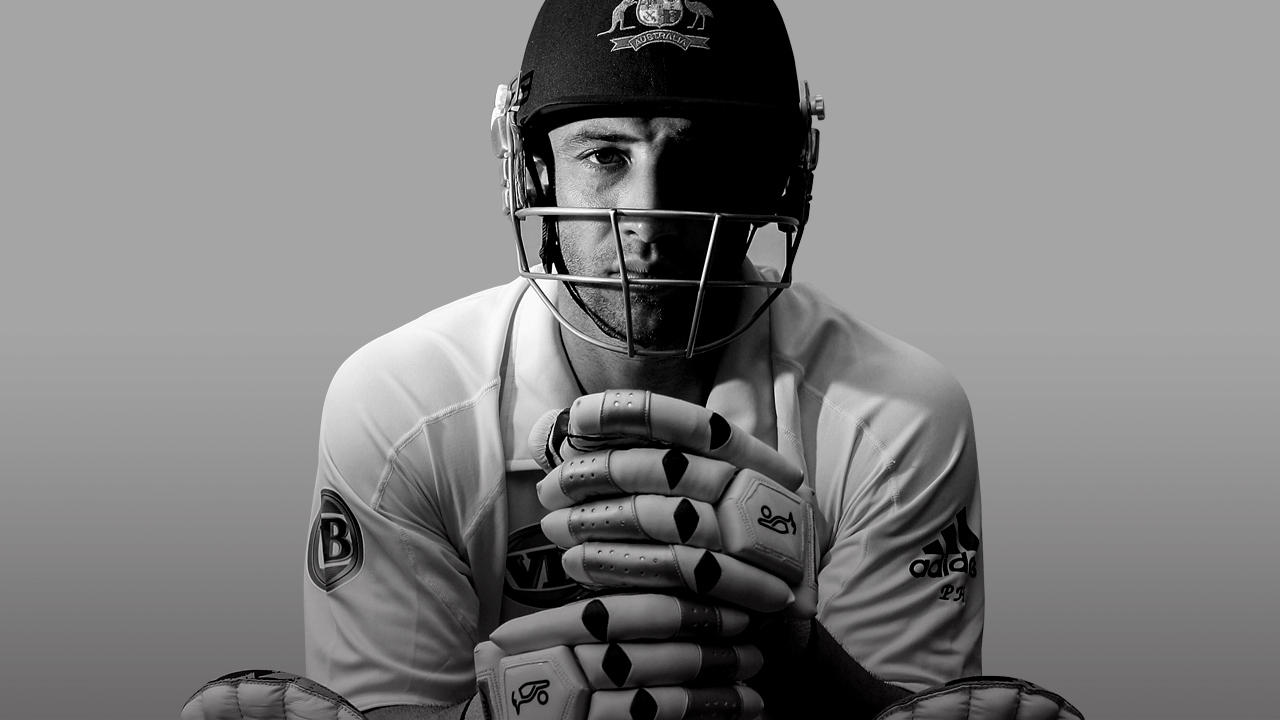 I’ve just checked-in and cleared customs at Sydney airport. I’m on my way to Durban. The Aussies are playing South Africa in the first Test at Kingsmead from Thursday and I’m heading over to call the game.

I’m expecting plenty of memories to come flooding back. It happens wherever you go in the cricketing world. You think of the matches you played at a particular ground, how we went as a team, whether you were among the runs … those kinds of things.

But this ground is on another level to most.

I only ever played one Test at Kingsmead in 2009. Australia won the match by 175 runs and took a 2-0 lead in the best-of-three series. We were up against one of the better South African teams who had just knocked us over at home.

And we did it with Phillip Hughes smashing centuries in both innings.

I opened the batting with him that series and watched in awe from the non-striker’s end as he blasted Dale Steyn, Morne Morkel, Makhaya Ntini, Jacques Kallis and Paul Harris all over the place. His reflexes were brilliant, as was his self-belief against what was probably the best attack in world cricket at the time.

It was only Hughesy’s second Test, yet he broke George Headley’s 79-year-old record to become the youngest batsman in history to hit two hundreds in a single Test.

There was a hardly a moment during those innings when he wasn’t smiling ear-to-ear.

‘This must be the first time in history a couple of wogs have opened the batting for Australia in a Test match!’

I said that to Hughesy before the first Test at the Wanderers on account of my Croatian and his Italian heritage. We both had a good chuckle. You wouldn’t have known it was his Test debut, or that he’d only just turned 20. He was relaxed, confident and laughing – even at my bad jokes!

It made me think about my own Test debut at Headingley eight years earlier and how nervous I was relative to him. It’s different for everyone. I’ve heard Mike Hussey say that he had a tear in his eye when he faced his first ball in Test cricket.

By contrast, Hughesy’s demeanour hardly changed whether he was playing for Western Suburbs at Pratten Park or opening for Australia at the Bullring. He loved scoring runs and the next ground, the next attack were just another opportunity for him to do what he loved and go big.

He was like my little shadow in that first season with NSW. Wherever I was, he was there. Observing, learning, taking it all in. We had only batted together for that one season in Shield cricket but, by the time we got to Johannesburg, it felt like we’d be doing it for years.

Sometimes there’s a bit of a feeling-out process when you’re opening with a new partner. Not Phillip.

‘This must be the first time in history a couple of wogs have opened the batting for Australia in a Test match!’

The Wanderers pitch had been under water leading into the Test. The groundstaff were taking to it with industrial-strength blow dryers because they were worried it was going to be underdone.

We knew it would be difficult to bat on early. And before Steyn had completed his first over, Hughesy was headed back to the pavilion. He tried to cut a rising ball and under-edged it through to Mark Boucher.

A lot of guys would take a fourth-ball duck on debut badly. Hughesy wasn’t one of them. He didn’t get too high or too low. Whether he’d scored a ton or a duck, he would still be there with a smile on his face talking about his beloved cows to anyone in the changeroom who would listen.

The South Africans thought they had his number in the second innings. They went after him. They  actually had him caught down the leg side off his gloves but they didn’t review it – those were the very early days of DRS – and he got the benefit of the doubt. From memory, he had a cheeky grin on his face.

Steyn, Morkel, Ntini and Kallis were banging them in, but Hughesy kept carving them over third man and over point. It was that same carefree approach we’d seen when he was piling up runs for NSW. Teams felt he was susceptible through the off-side because of his unorthodox technique, but he had such a good eye that they were actually bowling to his strength.

He ended up with 75 in the second innings and Australia went on to win the match by 162-runs.

But the best was yet to come.

On first inspection, the Kingsmead wicket was about as ugly a pitch as I’d seen in Test cricket. We had no idea how it was going to play.

Thankfully, it ended up playing better than it looked and Hughesy was on the offensive from the start. The Proteas thought they could pepper him.

He responded by taking each and every one them to the cleaners.

They set a seven-two field for most of the day, thinking they could get him nicking off at gully or in the slips. Instead, he smashed them square of the wicket when they went short and down the ground or off his pads when they tried a fuller length. He was just as potent off the front foot as the back.

Steyn was at the height of his powers back then and he responded with some seriously quick spells. That would’ve rattled most batsmen in world cricket. Hughesy? I remember him walking up to me at the end of one of those Steyn overs and saying, ‘Kat, how good is this, mate?’ He was loving the battle.

We talked a little bit about the match situation in between overs – see off the new ball, build our partnership up in blocks of ten runs, get through to drinks and then lunch – but the main topic of conversation seemed to be his cows and bulls. I’ve seen people more outwardly nervous in club games!

There was a hardly a moment during those innings when he wasn’t smiling ear-to-ear.

You could feel the frustration setting amongst South Africa’s quicks. They had no answers. They would drop a third man back, try a fly slip, move him around to a deep-ish point. Hughesy would just keep finding the gaps. Steyn and Morkel were bowling pretty well, not too wide off stump, and he was carving them at will – and at pace – wide of wherever they had set the fielders.

He also wouldn’t let Harris settle. He would cut him, drive him over mid-on, slog-sweep him. He was so hard to bowl to. He had a great eye and shots all around the wicket. There weren’t many chances. I reckon I contributed 15, maybe 20, runs to our 100-run partnership.

Hughesy raised his half-century with a hard-hit boundary off Kallis through the off-side and followed with another four the very next ball. He went even harder approaching his century. He hit a four early in Harris’s over and then completed his maiden Test ton with two massive sixes in a row down the ground.

Seriously, you couldn’t script it.

I’ll never forget those moments immediately after he reached his hundred. The viewing room at Kingsmead is one level up and the boys looked like they were about to jump out of the window. They were that pumped.

I tried to back off and let him enjoy the moment. It was his moment. I’d just been fortunate to share in the partnership with him. And when it was calming down I walked up, gave him a hug and congratulated him. It will always be a special memory.

It took an absolute screamer from Neil McKenzie in the gully to end his innings on 115, but Hughesy promptly followed that up with 160 in the second innings. It was every bit as spectacular and brave as the first and it pretty much sealed the match and the series for Australia.

I don’t remember much about the celebrations other than that Hughesy certainly didn’t miss out! And neither should he have. Here was a 20-year-old, playing against one of the best South African teams ever assembled – you can add guys like AB de Villiers, Hashim Amla and Graeme Smith to the names I’ve already mentioned – away from home in just his second Test.

I reckon it’s up there with the best debut series Test cricket has ever seen.

HIS BEST WAS STILL AHEAD

I’m reminded of Hughesy all the time.

I have a lovely photo of him in my house. It’s hung on a wall in a room where my boys like to jump around and play.

When I’m in there with them, I look at the photo and think about the Hughes family and what they must have gone through. I can’t imagine it.

To lose a son and brother in circumstances like that is beyond anything I can comprehend.

I firmly believe his best was still ahead of him as a cricketer. He would’ve ended up being an all-time great Test batsman for Australia. He had done it tough for periods, being in and out of the team, but he was still so young. I’ve no doubt he would’ve fought his way back and shown everyone how good he was.

For a few of us, we recognised how talented he was in Shield cricket.

For everyone else, that realisation came over a few magical days at Kingsmead.

A little gift to the cricketing world from a batting genius.