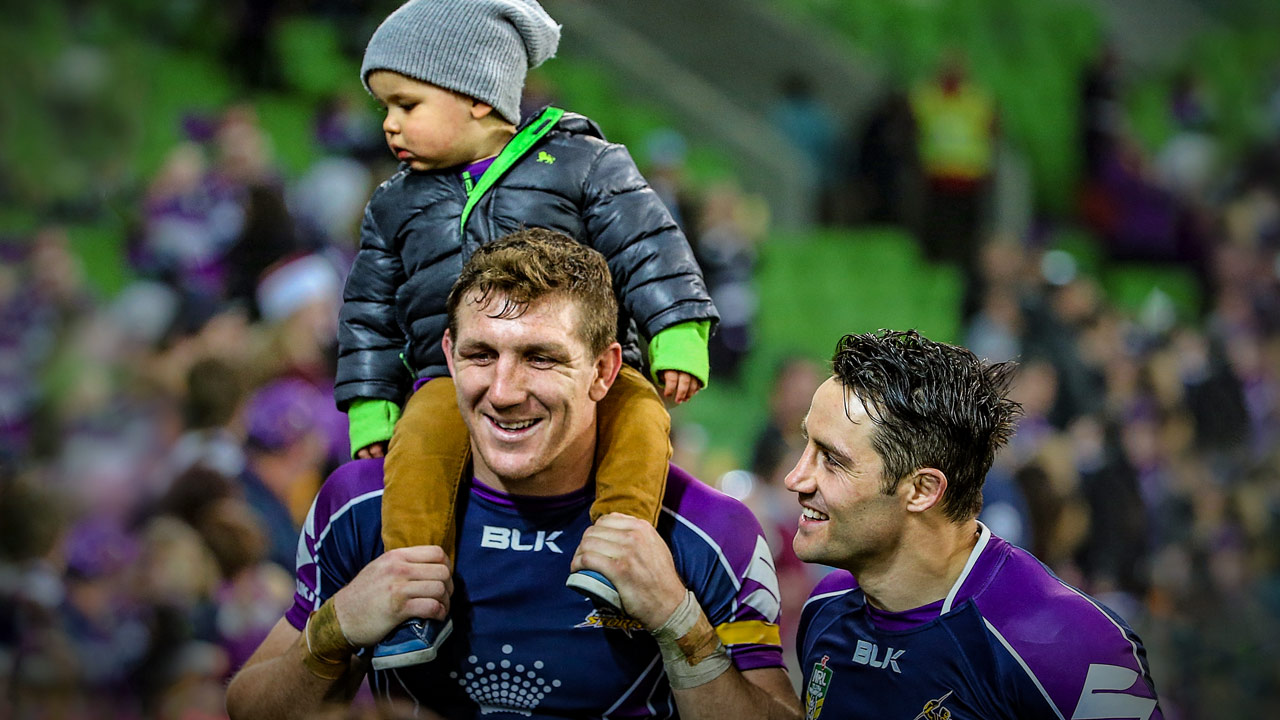 The Cooper you don’t remember

The Cooper you don’t remember

When I first laid eyes on Cooper, I wasn’t that impressed. It was Storm’s 2003 pre-season. He was at the back of the runs; he wasn’t in the fit group. He enjoyed going out a bit too much. People might find that hard to believe given the professional he became. But we all have a journey; it all starts somewhere.

Coops came down to Melbourne with a bunch of blokes from Norths Devils in Brisbane. There were two fulltime spots left and they went to Billy Slater and Dallas Johnson. Cooper got shipped back to Brisbane. It was a wake-up call for him. He saw his two mates become professional footballers. He went back up to Brisbane to work as a plumber.

I had another of the fulltime spots but still played a bit with him in reserve grade in 2003. He had a really good year, got his act together. By the end of ’03, he got asked to come down fulltime. By the start of the 2004 pre-season, he’d really changed his attitude. Seeing Dallas and Billy achieve it, it turned him around. He worked hard at training, stopped enjoying the party life. He knew when to train, when to enjoy yourself. Though not always…

Our first game together for Brisbane Norths was in Townsville. We had a good hard game, then enjoyed the Townsville night life. Next day Cooper wasn’t on the team bus. We turned up to the airport and there he was, still in his going-out gear, straight from his night out. Bit different to the professional bloke he is now.

Again, it shows everyone has a past. Everyone has a journey and things they went through. It shows younger players, whatever you turn up like, it doesn’t mean you can’t mould yourself into something else. Cooper did exactly that. He went from that young bloke to one of the most professional players the game’s ever seen.

He was never really a halfback. He’d play in the halves at Norths Devils but early on at the Storm they weren’t sure how to use him. Matty Orford had the No.7 jumper, Scott Hill was five-eighth. Cooper would play in the centres, at fullback. He played a bit of hooker. He played in the back row! At lock, on an edge. We were just trying to fit him in. And that carried through into 2005 and he was Jack of all trades, master of none.

In 2006, Matty Orford moved on. And we couldn’t find a new halfback from outside. Not one we could afford anyway. Craig Bellamy put it on Cooper – how would you like to become a halfback? He lived with Matty Johns in Sydney for a month or so. And it was amazing how he turned himself into a halfback. It’s a singular skill – all the passing, kicking, game awareness. And it didn’t come naturally to him. But through repetition he became one.

We turned up to the airport and there he was, still in his going-out gear, straight from his night out. Bit different to the professional bloke he is now.

I would’ve run thousands and thousands of lines off him after training. Just running off his hip, or wide, whatever. Different angles. I was working on footwork, he was working on timing. We’d work out little plays, short-side plays. Our combination was forged through pure repetition.

He just wanted to get better: how to be a halfback, how to set up players, the hole runners. We’d work off Cameron, Billy would join in. And do that for hours after training. And then I’d have the boots over the shoulder, head off for a shower, he’d head off with a bag of balls to practice kicking.

You look at the amazing kicks and passes he rips off during a game, and it’s nothing we haven’t seen at training, time and time again. It was never a surprise. He wouldn’t do something in a game if he hadn’t done it a thousand times at training. It’s how he became so effective. His kicking and passing was always on the money. So precise.

When we’d pull off a play in a game, the buzz is hard to describe. We’d go over it until we had it down pat. There came a time that we knew each other so well that he’d just come across the field and look at me. And I’d know what was on. He didn’t have to explain. He’d give me a look and I’d know where to run. There’d be times, how the opposition was set up and where Cooper was, I almost knew – I’m going through here. I just had to hit the hole and he’d find me. I knew he’d hit my chest.

We had a heap of little plays. He developed a lot of no-look passes. And I’d be looking one way, running a line. But I knew he was going to pass it to me as long as I ran the right angle. My job was simple: run the right spot, I’m going through. He’d go to the line and get clobbered by a front-rower hitting him from behind.

One of my favourite memories is from the 2012 grand final. Cooper put Billy through a hole with a no-look pass. I’d run a decoy, and got hammered by Josh Reynolds. We’d run that play so many times and Cooper had hit me that many times – and I reckon Joshy Reynolds may have seen some tape of us doing it! He belted me.

The week of the grand final, we had the play organised. We called it four or five times in the game and Cooper didn’t want a bar of it. Bill and I were screaming at him: mate we’ve got to put this play on. He was reluctant, thought it was as bit risky. As soon as Billy went through I went straight at Cooper because I knew we’d worked so hard at it. You practise something so long and then pull it off on a big stage, it’s immensely satisfying.

I played against him at Origin several times. He’s tough. It was my job to run at him. And he knew it was coming. It was always coming! It’s funny; you’re playing against a jersey not a mate. I’ve got that much respect for him. On his edge, it was a great challenge defensively. I knew how he played but probably, more importantly, he knew how I defended. It was very enjoyable. We played a bunch of Origins against each other and he was mostly on top.

But when we won in 2014, he, Cameron and Billy were the first over to congratulate me. To shake hands and say how happy they were. It was huge from three blokes who’ve lost something that meant so much, that they weren’t used to losing. They understood how much it meant to me and put their own feelings aside. It sums up their character.