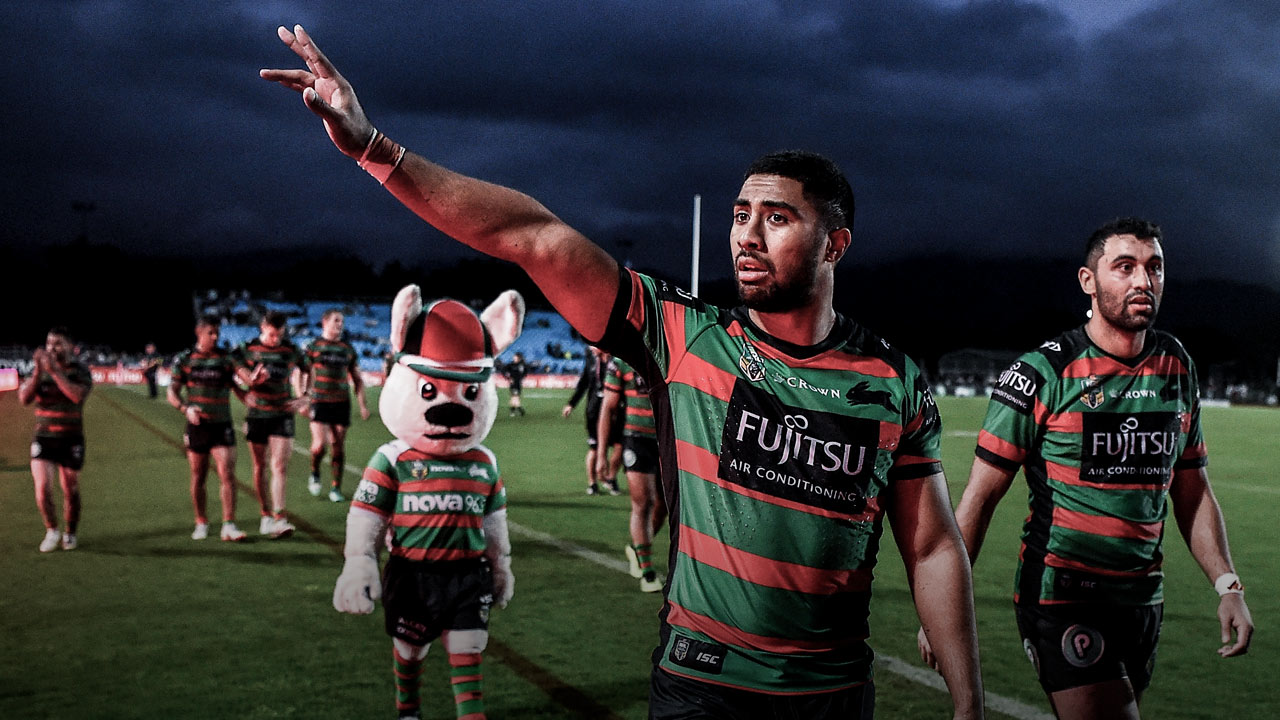 It was Michael’s idea.

He invited George and I over for lunch at Frangos, Bella Vista. It’s not a fancy restaurant by any means, just a really good chicken joint where you can eat-in, have a chat and catch-up with family.

Anyway, Michael had something on his mind and laid his plans on the table.

We were going to buy our mum and dad, Vialata and Antonio, a new home. He had already done it once before, after saving up when he was doing well at Penrith, and he felt this was the perfect time for an upgrade.

After kicking his idea around, we all agreed it was the very least we could do. We put in equal amounts to secure a bigger house for mum and dad. It was really exciting. Michael said he would do the leg work – hunt around and try to find the perfect place – and he eventually found it, two years ago now.

The whole family were a bit shocked when we surprised them. There were plenty of tears.

I’m proud we could do that for mum and dad. They’ve been so supportive – never missing a game we played, even if it meant driving thousands of kilometres on road trips to Melbourne, Brisbane and Townsville, because they don’t fancy flying.

We owe them heaps, right down to our sporting genes! Dad was a pretty handy rugby union player in his day, while mum was a star athlete and netballer back home in Tonga.

Our parents left Tonga for Australia when they were young.

There wasn’t a lot of opportunity back on the island and they wanted a better life for us. We grew up in a housing commission estate in Blackett, near Mount Druitt. It was a tiny three-bedroom weatherboard house in Idriess Crescent. Nothing flash, but it was home to mum, dad and all six of us for several years.

Aside from our parents, there was our sister, Tolola, and five boys – Fred, Paul, Michael, George and me. It was a bit of a squeeze but at the time we didn’t really think much about it. George and I slept on single mattresses in the loungeroom, with mum and dad bunking down on the sofa a few metres away.

The other kids were in bedrooms on the other side of the house, but it was cool. We had a big family and a small house. Plenty of families were in the same boat in the district.

Our parents left Tonga for Australia when they were young. There wasn’t a lot of opportunity back on the island and they wanted a better life for us.

I did my homework in the kitchen with George, with mum cooking dinner at the same time alongside us.

Michael? Not sure if he did much homework!

We didn’t have much growing up. Mum and dad worked a number of jobs to put food on the table and pay the bills. Dad at one time worked for a chicken processing company but later got a job lopping trees for the local council. Mum was a trained nurse and worked in a retirement village. She is still a nurse to this day.

Antonio and Vialata worked long hours, but they were always there to support and inspire us in everything we did. And, in the case of Michael, George and me, they are the reason we made it to the NRL.

THREE BROTHERS, NOT ALWAYS IN ARMS

I am the youngest member of a pretty well-known rugby league family, which is something I’m really proud of.

If you follow the NRL, you’ll know that my brothers Michael and George are at Parramatta (via Penrith) and I am at Souths.

The three of us have always gotten on well and supported each other. We catch up as often as our training, playing and travelling schedules allow. There isn’t a whole lot of footy banter between us. We have our own careers to focus on and try to avoid geeing each other up about our games.

That was until earlier this year, in the middle of June.

Souths played Parra at ANZ Stadium. I was fortunate to score four tries against the Eels, who had both Michael and George in their team. How good!

I’ll admit there was an extra buzz looking across the other side of the field and seeing my two brothers.

During the game there was a bit of chat, but not much was said after the final siren. Michael was filthy at losing the game, and George? I don’t really know – he disappeared pretty quickly!

I was fortunate to score four tries against the Eels, who had both Michael and George in their team. How good!

It was much the same later when we all met back at home. Mum was really happy for me but also mindful of the other boys.

When Michael made his Panthers debut, I was all of 11 years old. I really looked up to him – my brother was a first-grade star! He was always in the papers, on the TV and radio. People were asking for his autograph.

He did really well, too, scoring lots of tries.

As a budding young footballer, I watched him closely at home, saw the sacrifices he made by what he ate (and didn’t eat), when he stayed in instead of going out, and so on.

As I got older, I tried to mimic what he had done. He set a really good example for me.

FROM WESTIE TO BUNNY

As a Penrith junior – and with my older brother making a name in the big time – South Sydney was never in my thoughts. I was a westie through and through. I couldn’t see myself playing for anyone other than Penrith, let alone a club in the same city.

Things change and they can change fast.

I played five top-grade games for the Panthers in 2015, but there were too many quality wingers at the club and I was going to be the third or fourth cab off the rank.

I had to look for an opportunity somewhere else. Thankfully, that chance came at the Rabbitohs. I met up with Madge Maguire, who said he was keen to get me to Redfern. I liked the plans he had for me. He said I had a future there.

Without a doubt, I was a little hesitant – maybe even a bit scared – but he assured me first-grade footy would be a reality if I worked really hard. I’m happy I did. I feel at home at Souths now and if I can do everything right, hopefully it will stay that way for many years to come.

I was a westie through and through. I couldn’t see myself playing for anyone other than Penrith, let alone a club in the same city.

Nowadays, I live in Botany with my partner, Samantha.

When you walk down the street, you see people wearing red and green beanies, scarves, caps. Every other vehicle has a Rabbitohs bumper sticker. It’s real Souths heartland.

And then you go to training, there are dozens, sometimes hundreds, of Rabbitoh fans watching us work towards the weekend; willing us towards greater things.

Samantha and I have a little dog that we bought, after spying him in a pet shop during a stroll through Eastgardens one day. He’s a Border Collie cross – we called him Butch – and when we take him for walks at Centennial Park, people come up and want to pat him and talk about the footy.

I love it. It makes me feel really connected with the area.

One of the best things about playing at Souths has been the opportunity to run on to the field with Greg Inglis.

He has been a hero of mine since he debuted with Melbourne as a teenager in 2005. I was just a nine-year-old kid from Penrith back then and I remember watching him score a try in his first game. I followed him closely, really closely, from that day onwards.

I feel it’s a massive achievement in my life to have played alongside him, to be honest.

It’s one of those things you can tell your grandkids about in the decades to come. You have to pinch yourself sometimes. Here’s one of your boyhood idols and now you’re talking tactics and working out where our next points are going to come.

Perhaps best of all, I can now call Greg Inglis one of my good mates.

Greg Inglis has been a hero of mine since he debuted with Melbourne as a teenager in 2005. I was just a nine-year-old kid from Penrith back then.

Immortals have been in the news recently. In my mind, he has got to be there sooner rather than later. Whenever I run on to the pitch, I keep telling myself that I must be in position to capitalise on the stuff Greggy does. I can say that GI has been responsible for the bulk of my 17 tries. His amazing ability to skip outside and use his fend and incredible strength has opened up so many opportunities for me.

Sometimes, he can be short and to the point. But it’s the little things that count in the NRL – if I don’t get them right, GI tells me exactly how it is. He has been great to me and always offers words of encouragement and advice.

GI obviously isn’t the only superstar we have at Souths. I have learned so much from the likes of John Sutton, Sammy Burgess, Dane Gagai, Adam Reynolds, Alex Johnston, Angus Crichton, Damien Cook and everyone – who have I left out?

It is a privilege to play with these guys and I think we have a serious shot at something special in the weeks ahead. I can’t wait to get back in the action.

I’m out injured at the moment but was proud to cross for 17 tries in 17 games prior to that.

I’m lucky – we have a lot of strike power in our side and it’s fun playing at the end of such a creative backline.

While the attack has been positive, I honestly believe my job for the team is just as big in defence.

Every week, I have been working hard to improve my tackling, communication with the guys inside me and also fielding balls under all kinds of pressure. Those long hours turn into more consistent performances which turns into confidence – it all rolls into itself.

The Rabbitohs are sitting at the top of the table, but everyone in the club knows we have tons of improvement left in us. It’s something Anthony Seibold reminds us of all the time.

I have a good relationship with Siebs. He says he has massive confidence in me and I never want to let him down. We have had plenty of one-on-one chats this year and that’s great.

You know exactly where you stand with Siebs.