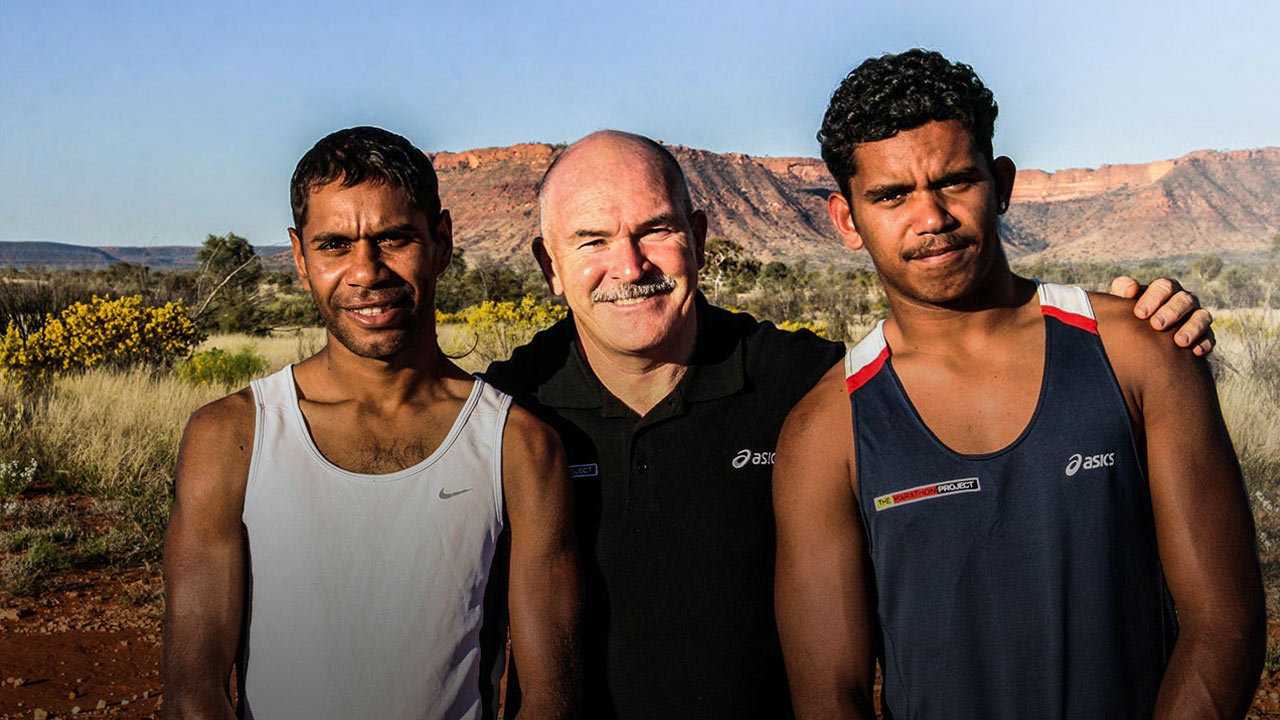 The race that saves lives

The race that saves lives

The times I stood on the victory dais as the Australian flag was raised and the national anthem played are cherished memories that will stay with me forever.

But my work with the Indigenous Marathon Project is far more important.

The situation for our Indigenous community is a national disgrace. It is a horrific, dark scar that we have in this beautiful, bright country. Chronic disease, premature death and mental health issues are rampant.

I’m not equipped to solve the difficult issues the community is confronted with, but I know that everything can be improved by running and the sense of self-worth you get from exercise.

Any normal person would train for four years before they run their first marathon.

Each year, we train a group of Aboriginal and Torres Strait Island men and women. They come from right around Australia – major cities, country towns and the most remote communities. After just six months, they run their first marathon.

And not just any marathon – the New York City Marathon. We don’t select our runners for their athletic ability. What we identify in each member of the team is a sense of purpose and a capacity to become a leader.

That’s what this is all about: empowering them to become drivers of change in their families and communities.

Just getting them passports can be a challenge. Some members of the team don’t have birth certificates when they are selected.

This year, we selected a team of ten to run in New York. They all overcame unique challenges and finished the race.

Getting to the finish line is just the start.

Posted by The Indigenous Marathon Foundation on Monday, 6 November 2017

I retired a long time ago. We’ve had some good runners since then but no other Aussie has really pushed for a world record or a gold medal at the world championships.

In 2010, I was asked an interesting question by a documentary maker, ‘Can we find an Aboriginal runner to challenge the African dominance in distance running?’

I was hooked on the idea. Indigenous Australians are the original distance runners. Could we reawaken that culture?

We travelled to central Australia to find the first group of young Indigenous men. The ambition was to train them to run in New York.

Our journey took us to remote communities in Arnhem Land, the Kimberley and the Central Desert. It was the first time I had truly been exposed to Indigenous Australia. It was confronting to see some of the problems that we face as a nation. I felt embarrassed.

The situation for our Indigenous community is a national disgrace. It is a horrific, dark scar that we have in this beautiful, bright country. Chronic disease, premature death and mental health issues are rampant.

I saw the social dysfunction and health problems. But the thing that upset me most was the lack of pride, self-respect and hope.

Without pride and hope you have nothing. And without self-worth, you’ll never make an effort to achieve anything in your life. You won’t push yourself to get off the smokes, go to school, get a job or be a good parent, because it’s all hard.

To see the transformation that they went through and the impact they had on their families and communities was incredible. When those four men finished the 2010 marathon, they were exuding pride and a sense of accomplishment.

It made me realise that we had the opportunity to drive real social change, which is far more important than finding Australia’s next elite runner.

That’s how the IMP project was born. Those four men became our first ‘FrontRunners’, working as ambassadors in the community.

We now have 75 graduates who have completed the program. Each year we see the best qualities in humanity rise out of the most challenging circumstances.

THE QUESTION & THE ANSWER

The atmosphere is electric. To start the race, they don’t fire a gun – they fire a bloody cannon on the bridge at Staten Island! Then you’re one of 50,000 runners in a race watched by 1.5 million spectators.

There are bands playing and everyone is high-fiving. You get this huge adrenaline dump which churns up even more energy.

When our runners reach Central Park and still have 10km to go, they’ve already run further than they ever have before. They have nothing left in the tank.

It’s called hitting the wall. It feels a little bit like you’ve been awake for 48 hours. All you want to do is sit down on the side of the road. You can’t concentrate and you get really foggy.

That’s when each runner must ask themselves a big question: ‘Why am I doing this?’

Their answers are varied and personal. Some of our runners are on a journey to overcome the most horrific, terrible circumstances. Others are passionate about becoming a positive role model for their kids and families.

Their answers to that question are what enables them to push on and finish the race, despite all the pain. It’s not supposed to be easy. It’s about giving them the opportunity to prove something to themselves.

Some of the greatest experiences of my life have been over the last seven years, standing on the finishing line in New York as they come in. There are a lot of tears.

They’ve got nothing left inside of them except this incredible energy which comes from fuelling their spirit and realising that they are more than what they ever thought was possible.

THE POWER OF PURPOSE

It’s what they do when they come back from New York that is most important. It’s like going to university – if you graduate and never do anything with your degree, what was the point?

Never underestimate the impact one person can have. You don’t have to be the Prime Minister of Australia or a neurosurgeon. One person with a purpose and the courage to stand up is an incredibly powerful force.

They’ve got nothing left inside of them except this incredible energy which comes from fuelling their spirit and realising that they are more than what they ever thought was possible.

The only way we can support them is by partnering up with sponsors. That’s not always about money. It can also be about opportunities we can provide to our graduates to help them make a difference.

The Indigenous Marathon Foundation has four core programs. The IMP is the New York City Marathon Group. We also have our FrontRunners, Indigenous Communities for Activity and Nutrition and a grassroots program called Deadly Running Australia.

We are creating a tsunami of runners around the country, from little kids through to people in their 70s and 80s.

I want to make running a normal and accessible part of everyday Indigenous life. I’m sure that we will probably produce some great Olympians along the way. But the most important thing – more than medals and glory and fame – is changing the narrative.

As a nation, we need to embrace our Indigenous culture but, while all we hear is negativity, it’s hard to get the Australian public to engage.

By sharing the positive stories, hopefully the rest of the country can see this incredible strength, resilience and capacity for good that Indigenous Australians have.

Posted by The Indigenous Marathon Foundation on Monday, 6 November 2017

WHAT IS TRULY IMPORTANT

It has taught me what is truly important in life. We have a tendency to get caught up in so many materialistic trappings, we lose perspective of what really matters.

Indigenous Australians have a hundred-fold appreciation of the significance of family and relationships than the majority of the community.

As a global community, we’re starting to become conscious of many environmental issues. For tens of thousands of years, Indigenous Australians have been experts when it comes to managing the environment. There is so much we can learn from them.

I hope there is a future where we, as a nation, can set aside our preconceived idea of what success is and recognise that maybe we don’t know everything. Maybe there are other ways to see the world.

The benefit to us would be incredibly profound and we would gain a greater respect and admiration for a culture that has been around continuously for tens of thousands of years.

That can only be good for Australia.