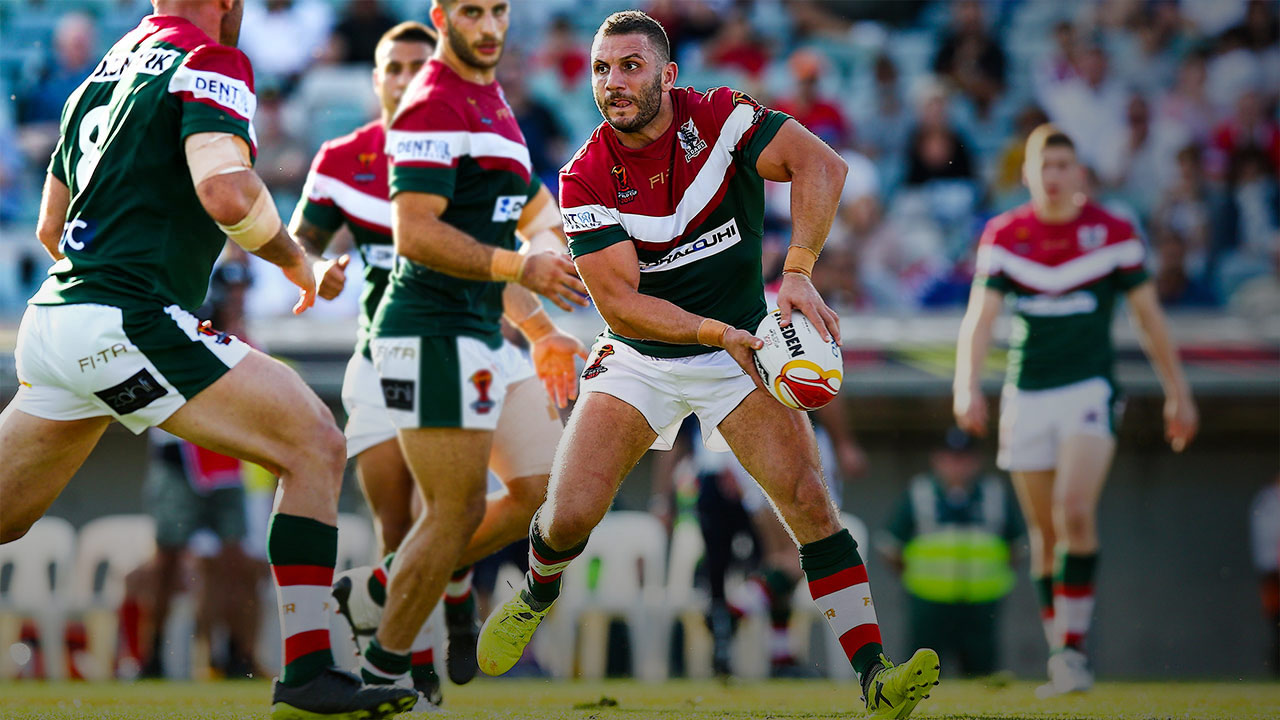 The biggest challenge for Lebanon at this World Cup won’t be that presented by the Kangaroos on Saturday. It was getting on the field in the first place.

Many of the players in the Cedars squad hold down fulltime jobs to pay the bills. They can’t afford to abandon their businesses for an entire month. They have willingly sacrificed work opportunities and taken a financial hit to represent Lebanon at this tournament.

Nick Kassis is an electrician, Chris Saab has an earth-moving business, Jason Wehbe is a cafe owner, Jamie Clark is in the building game, Abbas Miski and Ray Moujalli are personal trainers, Ahmad Eliaz runs a chicken shop and Ray Sabat, who lives in Lebanon and has travelled here with the squad, runs a gym back in Jounieh.

The list goes on. When we’ve got a day free of training, or a late-morning start, many of the guys will disappear back to their jobs to maintain the momentum of their businesses and keep their cashflows alive. Then they’ll return to camp in time for our next commitment.

It’s been an eye-opener for me, the other fulltime players and our coach, Freddie Fittler.

We’re not paid to play. We receive $30 spending money per day. That’s all. The Aussies and the Kiwis are paid to play and stand to earn plenty more in prizemoney at the end of the tournament should they lift the trophy. But our boys will get nothing.

We take it for granted sometimes in the NRL, earning a living out of playing footy, but these boys playing in the NSW Cup and Ron Massey Shield and other competitions can’t rely on that to make ends meet.

During the season they work during the day and train at night. But they don’t complain. They’re doing what they love.

Our World Cup camp will be over in a couple of weeks and everyone will return to their normal lives. For them, that’s holding down a regular job or running a business. Without that they would have nothing.

I’ve been mightily impressed with their attitudes.

THIS IS WHAT IT MEANS TO US

I’m just as impressed by what I’ve witnessed at training and on the field.

I’ll give you an example of their commitment.

Ray Moujalli plays for Canterbury in the NSW Cup. He has played one NRL game in his long career. Not many people are aware of this, but he badly injured his knee three months ago and needed a reconstruction.

Normally, a player would have no hope of returning in time for this World Cup. But Ray was desperate to be part of it. He had been representing Lebanon for many years but had never participated in a World Cup because we hadn’t qualified since 2000.

He opted for LARS surgery in an attempt to speed things up. Still, no one gave him a chance. No one, that is, except him. He worked incredibly hard through all of the rehab. And last week he played against England – three months after a knee reconstruction.

That’s inspirational. We all thought he was dreaming, but several weeks before the squad was picked he announced to us he was ready. He proved his fitness and won selection. No one could believe it.

The boys love Ray. We all revelled in seeing his emotion when it came time to play England. Even at my age, and with everything I’ve managed to achieve in the game, seeing something like that teaches me new aspects of mental strength. I’m amazed.

He worked incredibly hard through all of the rehab. And last week he played against England – three months after a knee reconstruction.

It proves that if you believe something is possible, and you’re prepared to work hard enough, you can achieve anything. Ray’s not battling out there, either. He’s playing really well. We knew if we defeated France in our opening game we would likely qualify for the quarter-finals. We just had to get the job done there. We disposed of the French and then we held our own against England.

Jamie Clark and the other players standing up to the English in the middle of the field was remarkable given some haven’t played at a senior level in their whole careers.

Now we’re playing Australia. That’s as good as it gets. What an experience that will be for our squad.

It’s a huge assignment, but we’re embracing it.

One of the proudest moments of my career and a true honour to be named as captain of @lebanonrl for this years @rlwc2017. Been 15 years since I wore this jersey but now I can't wait to lead the boys out and do our motherland and the Lebanese people here and back home proud. Get behind us and hope to see the Lebanese community at the games cheering us on. #bringyourdurbakke ? ?????? Plus a big shoutout to our spiritual captain @saaby13. I know how much being captain of Lebanon has meant to you over many years and I can't wait to play alongside you!

HUMMUS COMING OUT OF MY PORES

Five players made the trip from Lebanon to try to win selection in the Cedars’ World Cup squad.

Only one – Ray Sabat – made it into the final 24, but the others remained in Australia for the tournament. They’re staying with members of the team’s management and they’ve been attending training.

The rest of us have taken it upon ourselves to show them around Sydney. We’ve been to Darling Harbour and Circular Quay. They were awestruck by the Opera House.

One day we took them to Bondi. The water was freezing, but I said, ‘You can’t come to Bondi without going in the water.’ A couple of them braved it and jumped in. Then we completed the coastal walk around the headland.

All the invitations we’re receiving from local Lebanese restaurant owners hasn’t been good for the waistline. But socially, it has been fantastic. The Lebanese community has rallied behind us. If we’re not attending their restaurants, they’re coming to our team hotel and putting on a barbecue for us.

I’ve got hummus coming out of my pores when I sweat at the moment. I’ve eaten that much of it! it’s all great food, but when you tell the Lebanese to cater for 30 they cater for 100.

People have asked me to equate this World Cup to playing State of Origin for NSW or Test matches for Australia. Let me describe it this way: the last few weeks have been among the most rewarding of my career.

I was just as nervous as the rest of our guys coming into camp.

I hadn’t played for a while and, unlike other squads, we didn’t enter camp until the tournament was starting. We were training three nights a week and going home, because many of our players had to work the following day.

We were desperate to create history by becoming the first team to win a World Cup game for Lebanon and I was concerned that perhaps we hadn’t adequately prepared to defeat the French.

But as soon as we arrived in camp it became apparent Freddie had tailored our preparation perfectly. And once we put on that Lebanon jumper, the pride and passion kicked in. We got the win and backed that up with a good performance against England. I couldn’t be prouder of the players for what they’ve achieved thus far.

We’re not paid to play. We receive $30 spending money per day. That’s all. The Aussies and the Kiwis are paid to play and stand to earn plenty more in prizemoney at the end of the tournament should they lift the trophy. But our boys will get nothing.

I see myself as an Australian and a Lebanese. I’m a fierce Aussie and I’m also proud of my family’s heritage. I absolutely love the Lebanese culture. It’s big on family, loyalty and respect and that’s how I was raised.

I’ve been to Lebanon four times and it’s been a magnificent experience. I hope to return soon. So many Lebanese are doing wonderful things in the community in Australia and, as a team, we’ve spoken about the impact we can have in the way we conduct ourselves, on and off the field.

I know my late Mother would have been so proud to see me in this jumper.

Pulling on that jersey makes me think of Mum. She loved Lebanon and I remember her telling me how much she missed it.

My Father and a lot of other family and friends have come out to the games and it means so much to me to have that support. I’m a bit of a wog boy myself.

I know so much about the Lebanese way of life.

BRING ON THE KANGAROOS

There is no shortage of belief among the guys in the squad, regardless of the tier of rugby league they’ve previously played at.

Once you pull on that jumper it makes you do things beyond expectations and beyond your recognised level.

Playing against Australia is an historic moment for the game in Lebanon. It’s a tremendous occasion for the players, especially the ones who have been slugging it out in the lower grades for their entire careers. This will be an extraordinary career highlight for them.

Freddie has done the right thing. He has kept it simple for us in this tournament. Whether you’re winning or losing, if things are going good or bad, it’s about what you need to execute as an individual and for the team. That narrow focus has been effective for us.

I see myself as an Australian and a Lebanese. I’m a fierce Aussie and I’m also proud of my family’s heritage. I absolutely love the Lebanese culture. It’s big on family, loyalty and respect and that’s how I was raised.

I’m privileged to have been born and raised in Australia. We live in the best country in the world. I’m also very aware of my family’s heritage. This game will be a celebration for the Cedars. We get to represent the country of our parents against the country where we were born.

My parents – and the parents of many of the other players – made enormous sacrifices to make the journey to Australia and build a new life.

I respect that. All of us do. And we’ll be showing that respect by giving all we’ve got against the Kangaroos.