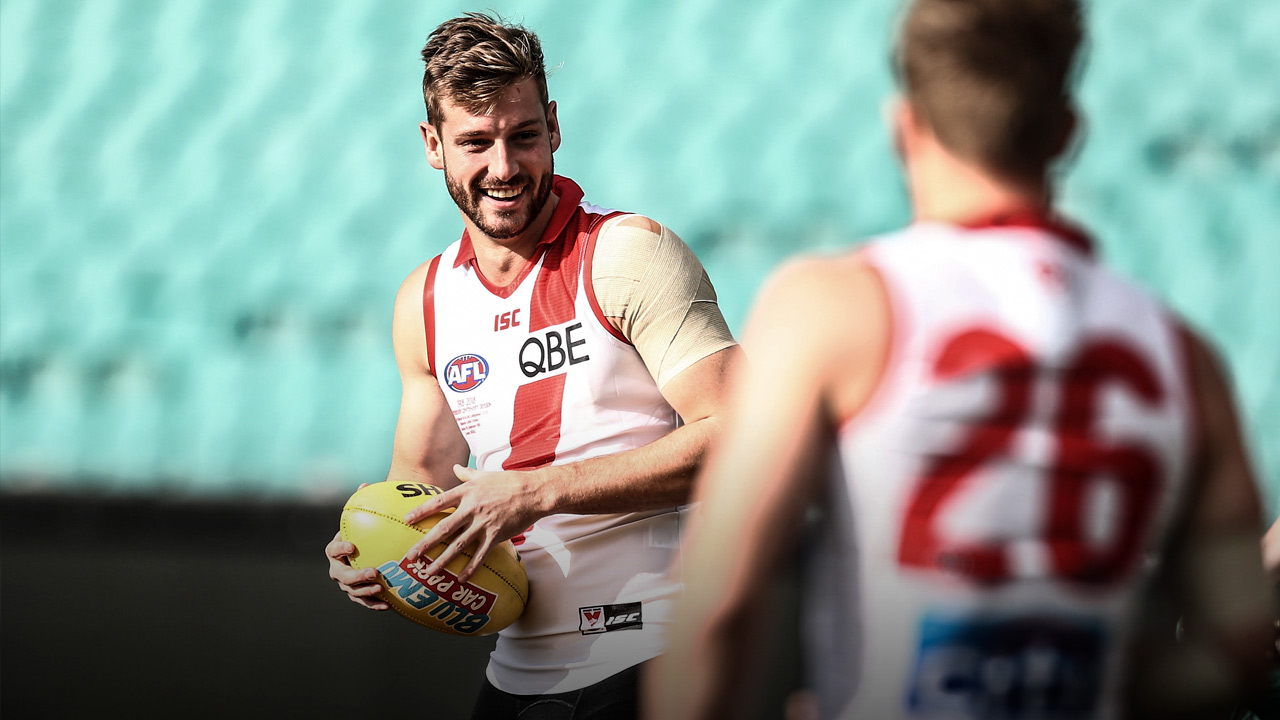 A truly amazing human being

A truly amazing human being

My first impression of Alex Johnson? I thought he was a skinny loudmouth, to be honest!

He seemed a bit arrogant at the time. I suppose coming from a private school in Melbourne, I thought he was a bit silver spoon.

But when he went out on the track and I saw what he actually could provide – which was voice, competitiveness and just a hundred per cent effort all the time – I got a glimpse of who he really was and what he had to offer.

He’s not a great-looking runner, but he was always up there with Dan Hannebery and these type of guys in the time trials. That made me think, ‘Geez, this kid’s got a bit about him’.

I remember when he played his first game, over in Perth against West Coast in round three, 2011. I think we had a few injuries, so AJ got a go, and I thought, ‘You’re going to play in the backline, just shut up and do your job’.

But this kid was just yelling and barking from behind me. He was on the last line and I was up, and I just felt like turning around and saying, ‘Mate, just shut up. I’m the senior player here, I’ll do the talking’. But that’s just how he is and how he was from day dot.

The Swans ended up winning a tight game that day.

In the 2012 grand final, AJ’s first half of footy was an unbelievable performance for such a young kid. He was best on ground at half-time, I’ve got no doubt about that. His impact on the game was huge. His ability to defend, then attack – and just run – was just huge for us.

AJ in the first half and Malceski in the second half is all I can remember from that day, the rest is a blur.

The key to his game is his effort and determination in each contest, and his willingness to put his body on the line. I certainly knew back then when I played with him that if there was a one-on-one contest, he was just going to win it. That’s what I remember and what we’ve seen glimpses of this year in the NEAFL.

And that’s why, after five knee reconstructions and 12 surgeries since he injured himself in the 2013 pre-season, AJ will finally play his 46th senior AFL game on Saturday night against Collingwood – 2,136 days since his last game in the 2012 grand final.

I’D DO ANYTHING FOR HIM

It’s been such a journey to get here. We’ve had so many ups and downs. We got so close on numerous occasions, only for his body to let him down.

I coached the twos the last two years and when he was injured, I thought, ‘What a great opportunity for someone to be involved and learn off AJ’.

He was only a young fella but he’d seen the highs and lows of footy and because we were travelling with each other for pretty much two years, he’d come with us on away trips and I had heaps of conversations with him and obviously we got closer and closer.

People have given me credit for being there for him, for being his support and helping him through it all.

I disagree with that.

I was just his mate and trying to help him as much as I possibly could in the only way I know how, and that’s just to be there for him. That’s all I did. I didn’t give him any specific instructions or any of that stuff. I just helped him as much as I could.

I just love the kid. I’d do anything for him.

In the 2012 grand final, AJ’s first half of footy was an unbelievable performance for such a young kid. He was best on ground at half-time.

I can’t remember if it was originally my idea or not to bring him into the twos, but I think we had a discussion and AJ was obviously going through some really bad times, and we just thought it would be a great opportunity for him to get involved, get his head around footy again, teach the young kids and stay involved in the club.

It’s tough when you’re just going to rehab and going to the weights room where no one goes unless they’re injured or whatever. I just tried to make sure that he still felt part of the club.

That’s the hardest thing in rehab. I’ve been there numerous times yourself and you just feel like shit. It’s not anyone’s fault, it’s just the way it is. I knew that and I thought this would be the best way to keep him engaged in footy and engaged in the club.

Alex has not just hung around the club for the last five years – he has been a Sydney Swan and a real contributor. He went on a couple of European vacations in the middle of that which certainly helped, but that’s another part of the process. Sometimes you have to get away, and he needed that at that time.

Other times you need to stay involved and that was part of it, so hopefully that’s helped him along the journey and has played a part in him coming back.

I think I’ll get emotional and a little bit teary when I see him out there on Saturday night.

Not until it happens will I feel like that because I know how close he’s been. I just don’t want anything else to go wrong. I just want to see him out there doing his job and that’ll make me happy and emotional at the same time.

What will be a pass mark in his first game back?

A pass mark will be if he does his job on his opponent and gets through the game unscathed, that’s a pass mark from me, and in that order. He’s got to do his job first. I’ve made that very clear to him and he understands that. He hasn’t been gifted a spot.

I know he’s come a long way, but he can celebrate and do all that after the game, because he’s worked too hard not to make the most of it now. I might sound a bit hard-nosed, but that’s how it is.

I know he joked in the AthletesVoice piece he wrote recently that he’d never kicked a ball to Buddy Franklin in a game – except maybe accidentally out of defence in the 2012 grand final when Buddy played for Hawthorn!

While I’m a coach to Alex now, I’d say most of all I’m a mate – a mate who’s had the opportunity and honour to be a part of someone’s life that is quite amazing. AJ certainly is that and all credit to him. I’m just amazed how far he’s come, and hopefully I’ve helped him along the way to get to this point.

He really is the most amazing human being I’ve ever come across and a lot of people in this club would say the same thing. You just wouldn’t understand unless you’ve been here and seen what he’s actually gone through.

If you take away the operations, it’s the work that he’s done post-operations, and then to get a setback, then go again. It’s extraordinary, and I wish him all the best for the game this Saturday.

Alex Johnson is one of those guys who gets along with everyone. He’s the heart and soul of this footy club, that’s the only way you can put it.