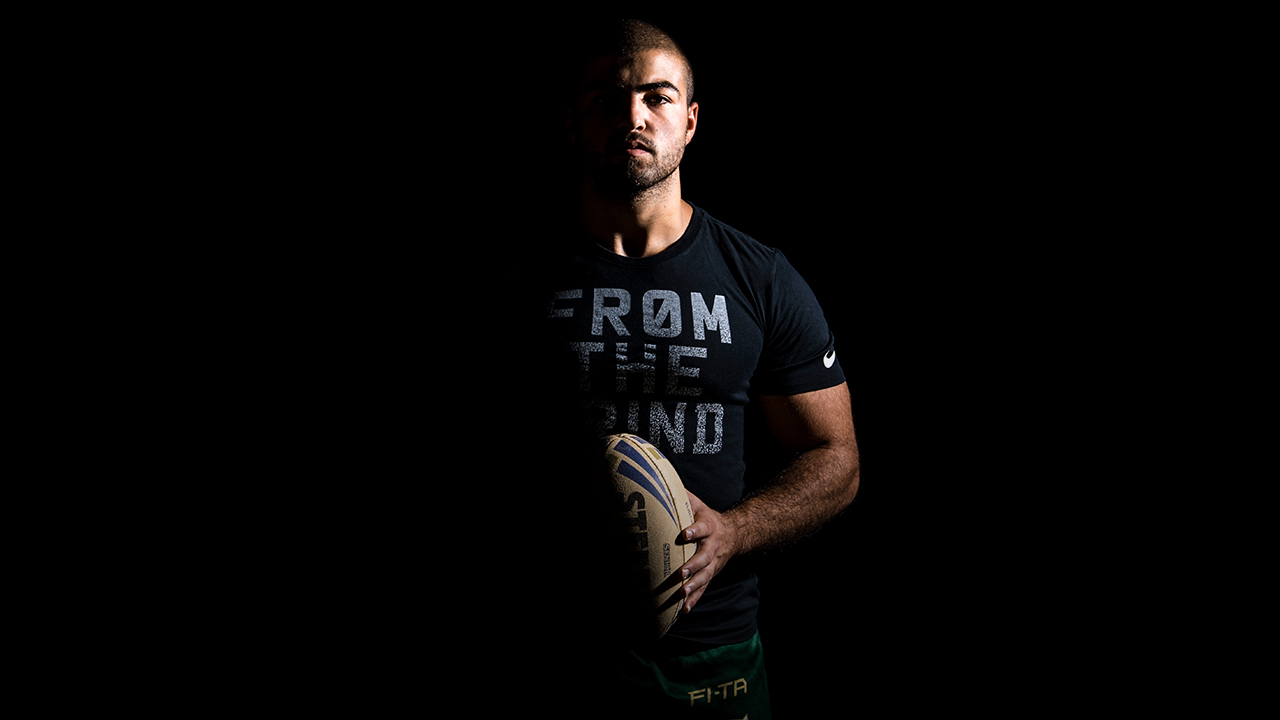 The story of league in Lebanon

The story of league in Lebanon

You should come to Jounieh. It’s a beautiful place.

It is on the Mediterranean, between Beirut and Tripoli, and it’s where I live with my family. When we first moved to Lebanon, we lived in Hadchit, about five kilometres from the Cedars of God. But Jounieh is home now. We run a gym, Raw Fitness, just off the Jounieh-Tripoli Highway.

The water, the souk, the Telefrique Harissa gondola up to Sayyidat Lubnān (Our Lady of Lebanon) who looks down over us … like I said, you really should come and see it.

I have been proud to be the only player in Lebanon’s 24-man squad at the World Cup who lives and plays there in the domestic league. So many of the experiences I’ve picked up over the last few months I can take home and use to improve the game.

In just a few months I have gone from watching NRL games on cable television in Jounieh – the night games in Australia are on just before lunchtime in Lebanon – to training alongside guys like Robbie Farah, Tim Mannah, Mitchell Moses and more.

It’s been a dream come true in so many ways. Let me tell you about it.

The lebanese cedars winning their first game against France, making history with the Cedars first ever win in a world cup! Im glad to be a part of the journey and im proud of all the boys who played today. This is just the beginning ???

‘JOUNIEH IS WHERE MY HEART IS’

My parents were born and raised in Lebanon. They moved to Australia, like so many, because of the war. They started from nothing and worked really hard to give us a chance in life.

They always had in their minds that they would return to Lebanon to reunite with all our grandparents, aunts and uncles. Every year my Dad, Simon, would tell me we were moving there. But I was 14 and we were still in Sydney.

Then in 2011 he said to me, ‘We’re going to Lebanon this year.’ I thought, ‘Sure, I’ve literally heard this from you every year.’

Three weeks before the actual flight, he said, ‘Start packing your bags.’ It was the first time I realised he was serious about the move.

I told my parents at the time that I would refuse to move to Lebanon unless they found me a footy team to play in over there. I loved league, especially Parramatta. My Mum, Madeleine, did her research before we moved and made some calls. She found me a team so I was good to go!

In just a few months I have gone from watching NRL games on cable television in Jounieh – the night games in Australia are on just before lunchtime in Lebanon – to training alongside guys like Robbie Farah, Tim Mannah, Mitchell Moses and more.

I started with Jounieh Predators but a few years ago I moved to Lycans. It used to be a union team and it changed to league.

At first, I found the move to Lebanon hard. It was a different culture and I needed to improve my Arabic. The education system is much more advanced in Lebanon, too. You start biology, physics and chemistry in Year 7. In Australia, you just study science very broadly. I had to catch up quickly.

Rugby league was really important in helping me integrate. I was pretty small, only about 60 kilos, when I first got there and Jounieh is an all-age team. It was a bit nerve wracking at first, because I was a 14-year-old playing against grown men and I had to prove myself.

I remember arriving at my first training sessions and the players all looked at me and said, ‘But you’re a little kid, you won’t be able to play with us.’ I replied, ‘Let me train with you guys and if I’m good enough you can play me.’

Our first game was against Wolves. They said they would put me on the bench. After about 60 minutes we were winning by quite a lot so they put me on the wing. I made an impact straight away. Ever since then I have played 80 minutes every game.

Now that I’m back in Sydney, my city of birth, for this World Cup, I can honestly say that home for me is Lebanon. Jounieh is where my heart is.

I cannot overstate how big this World Cup is for rugby league in Lebanon.

I have been posting about my experiences on Instagram a couple of times a week and so many people – people I’ve never met – have reached out to me to say how proud they are of this team, the Cedars.

There has been a lot of local media attention. My Mum and Sister, Chimene, are back home in Jounieh looking after the gym and they tell me they have never heard so much talk about rugby league, particularly after the win against France.

It all started with players in universities and in the army about 15 years ago. There were only enough players to fill one or two teams. Now we have ten university teams, division one and division two. We have around ten school teams and a few from outside the education system as well.

Rugby league in Lebanon is not like it is in Australia. The fields aren’t as nice. They don’t care about the grounds as much. We play on fields with soccer goals and put posts above them for every game.

But we love the game and we don’t take it for granted. It’s a struggle for us to play. We pay for our strapping, our gear, everything. We invest in ourselves to be able to play. We don’t get a living out of it. We play for the passion of it.

I have been posting about my experiences on Instagram a couple of times a week and so many people – people I’ve never met – have reached out to me to say how proud they are of this team, the Cedars.

For me, I had to make some sacrifices to come to this World Cup. I had to leave the gym for a few months and give away some clients. Also, I’m still at university studying physical education. Because I have missed so many courses this year to train with the squad, I will have to extend my studies for another year.

But I wouldn’t change it for anything. I love that Australians are learning more about my country.

More seriously, though, Lebanon often is portrayed negatively in the Australian media. This World Cup has been so positive for the Lebanese community here and shown everyone else what our country is really like.

There were five players from the local league in Lebanon in the original 40-man squad, but only one of us was going to make it through to the final 24.

It was a bit surreal for all of us when we first arrived in Australia. We weren’t sure what to make of it all.

Then one day, out of the blue, Robbie Farah called us and invited us to a gym session in Camperdown. When we finished, he took us all out to lunch and then to Bondi Beach. It shows the kind of character he has.

He didn’t have to do that. He didn’t know who the five of us were. Some people haven’t been too kind to him in the media after he left the Tigers, but I’m 100 percent sure these people don’t know the real Robbie Farah.

I have gone from watching him on the TV in my gym with a few friends to training alongside him. It’s been incredible. It’s the same with guys like Mitchell Moses and Tim Mannah, because I support Parramatta. I was following the Moses signing from Jounieh. I was really glad when he came to the Eels. He switched to another gear and so did the team.

They’re all really humble people to meet. They’ve taken a lot of time to speak to me and get to know me. I look up to them.

Then one day, out of the blue, Robbie Farah called us and invited us to a gym session in Camperdown. When we finished, he took us all out to lunch and then to Bondi Beach. It shows the kind of character he has.

A lot of the boys have been asking me about footy in Lebanon. I’ve told them all about it. Robbie has come over to Lebanon a couple of times so he knows what it’s like. But the rest of the boys have asked a lot about the differences between rugby league in Lebanon and Australia.

It’s the speed of the game, I tell them. It’s much faster here.

The energy of the crowds at our games has been amazing. The Lebanese community in Australia are so happy to be part of the World Cup as is my Dad, who flew over a couple of weeks ago.

The experience of being in camp ahead of the Test against the Kangaroos this weekend has been incredible, too. These are the best players in the world. I will soak up every minute of it.

There have been quite a few times when someone from the community will message Robbie or one of the other NRL players saying, ‘Bring the team down to our restaurant. We’d love to have them. It’s on us.’ We’ve taken them up on the offer a few times.

I have tried really hard to make the 17-man squad but it hasn’t quite worked out. There were times when I was a bit down about that, but I have learned to be grateful and thankful for this experience.

There are a lot of people who would love to be in my shoes.

I have seen how the game is played in Australia and learned from some excellent players and a coach like Brad Fittler. The way he analyses the opposition and goes through the game plan – and even little things like making sure we turn off our phones when we’re together so we can develop team chemistry – that’s not how we do things at home.

I can take all these experiences back to Lebanon and pass them on.

For anyone reading this, especially back in Lebanon, I want them to follow their dreams. This is a dream for me. I have always wanted to play in the NRL and I have now had this chance to learn from the best and improve my game.

Not only will I improve as a player, but so will all of rugby league in Lebanon from the lessons I have learned at the World Cup that I can now share with all the players and coaches.

Hopefully, the Cedars can return in four years’ time and go even further.