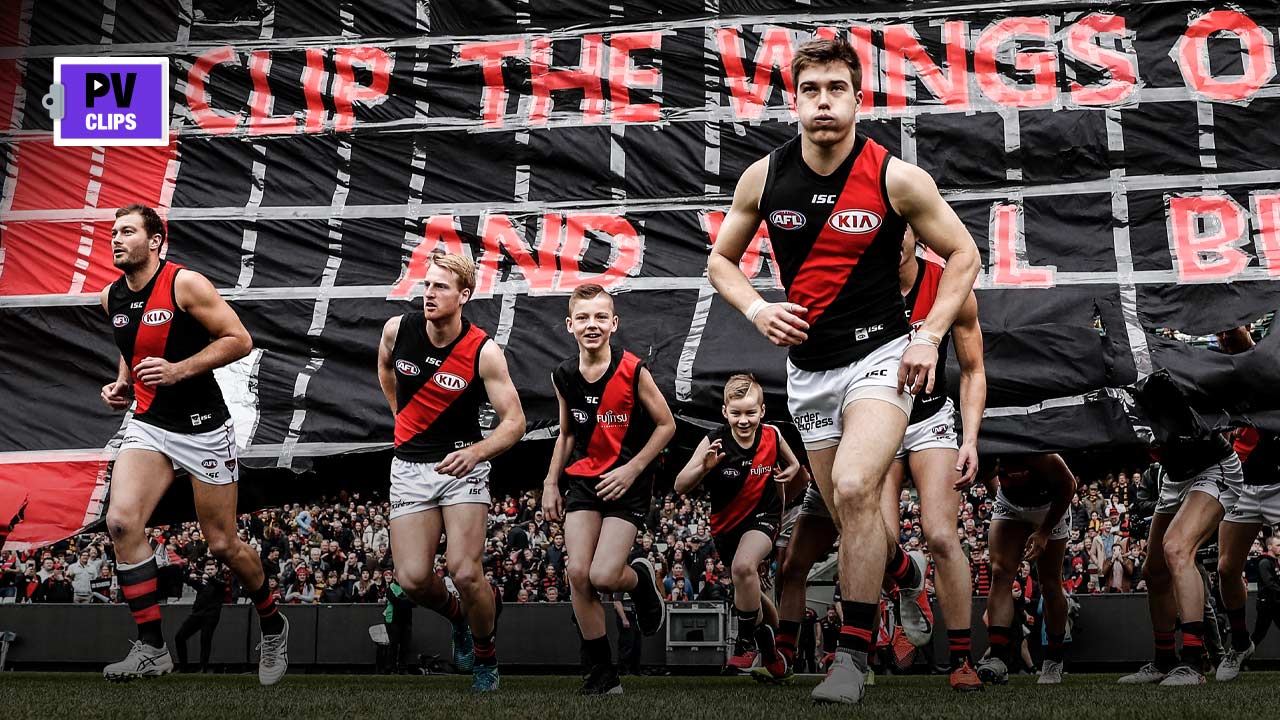 ‘Join me. This is about more than footy.’

This is the passionate call to arms from one of the AFL’s stars that has reverberated through the game this week.

But, as Essendon midfielder Zach Merrett revealed, his desire to stamp out sexism in the game stemmed from his experiences as a junior footballer, playing alongside two talented yet underestimated female teammates.

Also in this week’s PV Clips, fellow AFL player Gary Rohan has detailed the heartbreaking five hours he and wife Amy experienced with newborn daughter Willow before she passed away.

We also take a look inside the Liverpool dressing room after their Champions League semi-final triumph, Jose Mourinho relives his own Barcelona smackdown and Andrew Bogut weighs in on the ‘laughable’ criticism of Warriors teammate Steph Curry.

A discussion with teammates about that picture of AFLW star Tayla Harris has prompted Zach Merrett to issue a challenge to the entire code to lift its game when it comes to equality.

‘It represents how far we’ve come but how far we still have to go,’ Merrett writes of the picture for Fox Sports.

‘Some of the comments that accompanied the initial social media post were disgusting, but the support that followed from the AFLW and AFL community was uplifting.

‘I will never know why the conversation in the physio room took a pivot towards sexism in our game and inequality in Australia, but I’m glad it did.

Merrett went on to detail how he spent his junior years with female teammates, yet references or comparisons to them from both within and outside the team were almost always derogatory.

While acknowledging the progress that has been made, Merrett believes it remains a work in progress and has challenged the broader AFL community to join him on his mission for equality.

Geelong forward Gary Rohan has detailed his ongoing struggle with the loss of his baby daughter Willow last year.

Talking to Exclusive Insight, Rohan details how his Swans teammates at the time rallied around his family after Willow, a twin, was born with anencephaly and died within hours.

This week in sport has been defined by two stunning comebacks that have seen English clubs Liverpool and Tottenham progress to the Champions League final.

A key performer for Liverpool was fullback Trent Alexander-Arnold, who produced one of the most incredible setpiece plays ever seen to set up the decisive goal.

His reaction in the Anfield dressing room after the game says it all.

One of the key components of Liverpool’s success was nullifying the influence of Lionel Messi at Anfield, but it wasn’t the first time he’d been so brutally shut down in a Champions League semi.

In 2010, Jose Mourinho masterminded Inter Milan’s victory over Pep Guardiola’s Barcelona. In a piece for The Coaches’ Voice, Mourinho breaks down how he stopped Messi and orchestrated a 3-1 victory for Inter in awesome detail.

After suffering consecutive defeats this week against the Houston Rockets in their NBA Playoff series, Andrew Bogut has leapt to the defence of under-fire Golden State Warriors teammate Steph Curry.

Bogut believes the criticism of Curry is unwarranted, praising his resilience as the team looks towards arresting its slide.

‘I have no doubt Steph Curry is about to bounce back,’ Bogut writes for Yahoo Sport Australia.

‘We’ve seen this plenty of times from Steph where he has a couple of bad games in a row, but all it takes is one breakthrough game for people to remember who he is.

‘In all the games where he’s accused of being horrible he still makes huge shots. He hasn’t shot the ball as well as he usually does but we have no concerns about him.

‘He’s as resilient a guy as I’ve ever seen and that’s how he treats his bad games.’

#EXCLUSIVE: @andrewbogut writes for @YahooSportAu about where it went wrong in Game 4, and the criticism of Steph Curry. #NBAPlayoffs2019 #DubNation #WarriorsGround https://t.co/jWYhXLqbY5