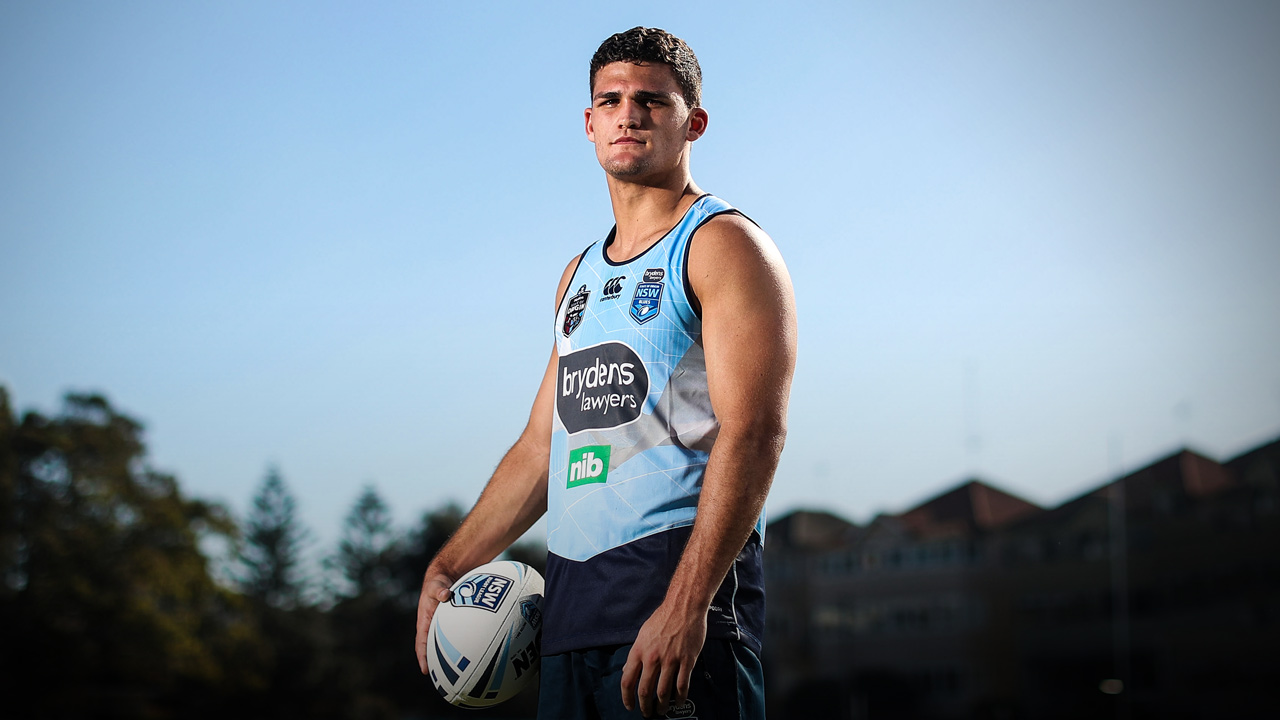 ‘Nothing fazes this man’

‘Nothing fazes this man’

NSW have found their State of Origin halfback for the next 10 or 12 years.

And hopefully we’ll see Nathan Cleary playing Test football for Australia at the end of the season as well. That’s how quickly things can happen. Look at the position.

There’s no more Cooper Cronk or Johnathan Thurston in the halves in rep footy. The halves from the team that wins the Origin series will probably take the Kangaroo jumpers.

I’m not the sort of person who would make the mistake of saying something that would put a teammate and friend under unnecessary pressure. I know from playing, training and talking with Nat ever since he came into first grade in the middle of 2016 what he’s capable of.

More importantly, he knows what he’s capable of.

When I say positive things about his ability to handle Origin footy, the same beliefs are already inside his head. He’s a confident footballer without being arrogant. He’s got great natural ability, he’s well prepared and his attitude is perfect.

I played four games at halfback for NSW, so I know how difficult a challenge it is.

Nat’s only 20, but that’s just on paper. He’s a lot older in the head. I think he’ll go well. The team NSW picked is a good, in-form team, with big, powerful and mobile forwards. And he’s got his halves partner from Penrith in Jimmy Maloney there as well.

Plus, I think the timing is great for him. Queensland have lost a lot of experience with Cameron Smith, Cronk and Thurston all gone, so it’s going to be an open slate out there for not just Nat, but a lot of new players. There’s a real opportunity to make your mark.

I think Origin is an arena that’s going to suit him, mentally and physically.

There was always going to be a question mark about how he’d come back from his knee injury earlier this season. That was going to tell us a bit more about him.

It was a serious enough injury for him to miss eight or 10 games, but he came back after seven and was straight back into top form. That was a big test for him and he passed it with flying colours. He’s tough in the mind and the body and I expect him to take the step up to Origin in his stride.

NSW have been waiting for this opportunity.

It’s not that they haven’t had quality halves in the past, but Queensland have had a red-hot side that enjoyed a lot of success. That made it difficult for anyone from NSW to flourish. Now the stars have aligned and a player like Nat has come through at a time when the Blues can sense a chance.

I think it’s the perfect match.

HE RUNS THE SHOW

I first started to hear about him when I came back to the Panthers from Brisbane in 2014.

There was this kid playing Harold Matthews Cup and he was supposed to be pretty good. He was the son of our coach, Ivan, so naturally there was a bit of talk around the club about him.

He went up to the next age group in SG Ball and the wraps kept getting bigger. Then he went to the under-20s competition. That’s when I first saw him play.

I knew straightaway he had what it took.

When players are young, it’s the way they move that tells you. He was so smooth and possessed all the qualities. It looked like he had plenty of time whenever the ball was in his hands and he was a good goal-kicker, too. He stood out from the pack.

He was a dead ringer for Ivan, but it wasn’t just the looks. They had the same demeanour. I chatted with Nat a few times, just saying hello, and he was very calm, just like his old man.

Really, it was like they were the same person. Bec and Ivan have done a great job with all of their kids.

Nat made his first-grade debut in round 13, 2016, against the Storm in Melbourne. That’s a massive ask for an 18-year-old. They tested him out, but he handled himself well. There were no worries with his defence. He was up to the mark. It was more than a solid debut against top-class opposition.

Injuries early on and Jamie Soward leaving for England meant there were a lot of changes in the halves for us that year. Nat had one game alongside Sowie before he left and, for the rest of the season, it was Nat and Bryce Cartwright in the halves. You can’t get much more rookie than that.

That was a tough induction for Nat, but it seemed easy for him. Water off a duck’s back. We made the finals. Nothing fazed him.

I knew straightaway he had what it took… When players are young, it’s the way they move that tells you. It looked like he had plenty of time whenever the ball was in his hands.

I’ve never had to babysit him from hooker. I’ve worked with him and made sure we were on the same page, but at no point has he struggled. I’d give him a few pointers – how to get involved in the game, how to approach finals footy – and he’d always handle it.

I’m sure there have been times when he was nervous, but you could never tell. Once he gets on the field, he’s not overawed by any occasion. Everything he’s had to do, he has stepped up to the plate and done it.

Ability. Personality. Preparation. Those are the three keys to Nat. The terrific composure is matched by an incredible work ethic. He’s the last to leave training. He’s always looking to improve and that’s definitely one of his strengths.

It’s no fluke, what he goes out and does.

Nat has always been a natural running player, and his organisational skills have improved a lot. Early on he wasn’t a natural talker on the field, but now it’s automatic. Out of him and Jimmy Maloney, Nat is definitely the main organiser.

He’s the halfback. He runs the show.

THE TRUTH ABOUT JIMMY, reg & peach

I had played against Jimmy plenty of times before he joined the Panthers this season. I’d seen him joking around in television interviews. But I didn’t know him personally.

He’s a character, Jimmy. Always on the go, always got something to say. But what people looking in from the outside probably don’t know is his depth of knowledge of the game.

Some people think he’s this laidback guy who takes it easy and flies by the seat of his pants. That’s not how it is. Not even close.

He knows the game inside out. Knows the opposition. Knows his own game and how to get the best out of himself. Knows how to positively influence his teammates.

Jimmy’s been a great success at several clubs – and he’s been able to achieve that success quickly each time. The Warriors made the grand final in his second year there. He won comps in his first year at the Roosters and again at the Sharks. Now I know why.

Nat is the dominant voice out of the two on the field, but Jimmy does more of the talking at training. How we’re going to do this or that, areas we need to improve. Whatever it is that really matters, he’s on top of it. He trains really hard.

There’s something about him that gives other players confidence. He knows he’s a winner and others can sense that. He’s very sure about his own game and that makes others comfortable. We know he’s going to perform every week and players want to follow him.

Playing hooker, I’ve got to work closely with these guys and we can’t afford to get it wrong.

I can tell from the tone of their voices who to give the ball to if they’re both calling for it. You can sense it when one of them feels there’s something on, rather than just calling for it for the sake of it.

There’s something about Jimmy that gives other players confidence. He knows he’s a winner and others can sense that.

Damien Cook will get used to them pretty quickly in the NSW team. The game plan won’t be too complex. Damien’s biggest asset is his running game and hopefully his forwards are making ground and getting some play-the-ball speed and he’ll have the chance to do that.

It was great to see Reagan Campbell-Gillard and Tyrone Peachey make the Blues team from Penrith as well.

Reg has always had great potential. He’s a big reason our forward pack is powering this season. He was outstanding at the back end of last season and he’s taken it to another level this year.

He gets through a lot of work, really good leg speed, aggressive in defence. There’s more offloads coming into his game as well. He’s got a good engine and his game’s evolving. Origin will suit him.

I’m rapt for Peach. He’s played every position except prop, I think, so he’s the ultimate utility. He could bob up anywhere. If the hooker needs a rest he’ll jump in there, or an injury in the halves. Back-row. Winger goes down, the centre can push out and he’ll go in there.

Hopefully he gets some decent game-time and not just a 10-minute spell. He’s electric when he runs the ball, so he can cause a bit of damage at the back end of halves when the opposition forwards get a bit tired. He can make tackle busts and create something out of nothing.

He’s playing with confidence, which is a great sign. I’m looking forward to seeing him out there.

I think NSW will win.

Queensland are Queensland, they’re always capable of pulling it off so you’ve got to be wary, but I really like the look of this NSW side.

I know there are 11 debutants, but I think it’s a red-hot team.

They’ll get the job done.