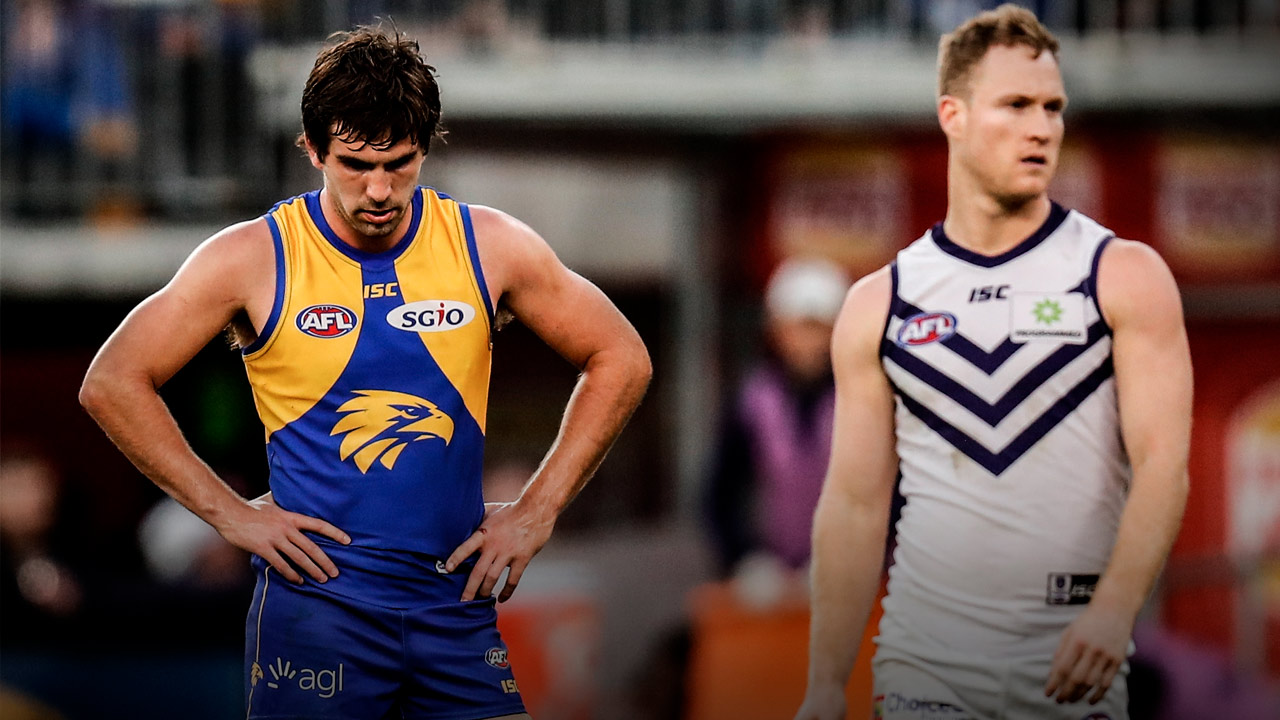 I remember a game I played for Fitzroy against Richmond.

I won’t name names, but one of the Richmond players whacked one of our blokes late in the second quarter. It was pretty bad. His eyes were rolling around in the back of his head at halftime.

But he was determined to get back out on the field. He wanted to square up. He ran on for the third quarter with this huge lump on the side of his head, screaming at the bloke who clocked him.

That was the norm back then.

I’ve thought about this in light of the Andrew Gaff-Andrew Brayshaw incident at the weekend and all the discussion it has generated since.

Andrew Brayshaw left the ground bleeding from the mouth after an incident involving Andrew Gaff.#AFLEaglesFreo pic.twitter.com/ECZgNqiehg

Years ago, it was expected that our player would return to the field after his head knock. Not anymore. Under today’s strict concussion protocols, that same impact would’ve resulted in him being stood down for the remainder of the game.

Moreover, on the odd occasion a team did lose a player to an illegal act back then, there was a 19th and 20th man rule and the last two players on your squad might’ve only got on for five or 10 minutes. In the modern game, with the heavy use of interchange, the absence of a player is felt far more acutely.

That’s why it is becoming increasingly difficult to argue against the introduction of red cards.

It was 21-versus-22 on Sunday after Gaff fractured the jaw and displaced the teeth of Brayshaw. Clearly, it’s a big advantage to the team in the wrong. Imagine if it happened in a Grand Final? It goes directly to the integrity and fairness of the contest.

This isn’t the first time the send-off debate has surfaced in our game, but as society grows more aware of concussion and its impacts, the parameters of the discussion are changing.

Society has already moved. Now it’s a case of whether the AFL will follow.

I’ve seen this debate from a few different angles through the years.

I was coaching the Swans during the Barry Hall-Brent Staker incident in 2008. Since the weekend, I’ve been trying to remember what my view on it was at the time. Here’s what I recall:

The hit happened off the ball. I don’t think I saw the incident until halftime or maybe just after. There was a game to coach and 21 other players on the team to think about. Barry later ran into the fence and broke his wrist, so there was that to consider, too.

My point is this: the game doesn’t stop for the coaches when these incidents happen.

In many ways, it would be a blessing if the player was red-carded and the issue taken out of the coach’s hands.

The coaches are dealing with various in-the-moment emotional responses as it stands. Ross Lyon would’ve been upset to see his young player getting smashed off the ball. Adam Simpson would’ve seen how shattered Gaff was and internally debated what the appropriate move was. And both of them had to keep coaching for the rest of the game. It’s the highest pressure two-and-a-half hours of the week.

Now imagine if Gaff – or Barry, in my case – was sent off. Nearly all those distractions are taken away from the coaches. It’s win-win.

Society has already moved. Now it’s a case of whether the AFL will follow.

I’ve also been reading reaction to the West Coast players celebrating with Gaff when he kicked a goal and some of the Eagles’ fans cheering him on after striking Brayshaw (to be fair, some of them probably weren’t fully aware what had happened given the incident happened so far off the ball).

A red card to Gaff would’ve taken all the noise and volatility away.

There’s another factor here, too, which doesn’t get discussed all that much: the immediate fate of the perpetrator. I would have understood if Gaff, in his heart of hearts, would’ve preferred not to have played on after the Brayshaw incident. He was visibly upset. Head in hands. Despondent. It was there for all to see.

A red card would have effectively removed him from the equation. As we’ve seen in the cases of Bugg, Cameron and others, life for the instigator can be difficult and complicated – both at the time of the offence and in the weeks and months to follow. The public ignominy and social media attacks often last much longer than the suspension handed down.

If I was coaching, I wouldn’t have been uncomfortable if Gaff had been red-carded given that, in this instance, it was a black-and-white issue. It would’ve been a case of, ‘OK, Gaff’s off for the rest of the game, it’s 21-versus-21, that’s a fair result, we’ll deal with the consequences after the game.’

It’s not even so much the deterrent element that makes the argument for red cards so compelling. That’s secondary. The main thing here is fairness. It’s tough to defend a scenario where the advantage weighs so heavily in favour of the perpetrator.

The argument against red cards has always come down to the grey areas.

How do you shape the rule? What does it look like? Who administers it?

We’ve all seen examples in other sports of coaches squabbling at post-match press conferences about interpretations of a send-off. When it’s a subjective judgement like, say, an accidental bump, you’re potentially opening yourself to a new tier of controversy.

But I’d argue the Gaff case – like Hall on Staker, Jeremy Cameron on Harris Andrews and Tom Bugg on Callum Mills – is black-and-white.

What happened was out of line. Everyone felt it was an illegal act.

He’ll likely be facing an extended stint out of the game at the tribunal – I heard Gerard Whateley on Monday call for a 12-week ban.

A red card to Gaff would’ve taken all the noise and volatility away.

That’s where we have to get the rule spot-on. If we’re heading down the red card route, it must be devised in a way whereby little room is left for interpretation. We have to be really, really clear on what constitutes a send-off.

In the Gaff case, anyone with a normal sense of justice would agree that West Coast shouldn’t have derived the benefit of an extra player when Brayshaw left the field. I couldn’t make a case to the contrary.

It’s getting harder and harder to mount an argument against the red card.

What’s the downside of having it in such a clear-cut situation?

“I feel sick. I want to apologise to Andy, I’m so sorry. It doesn’t reflect my character.”

Let’s use the Grand Final as a barometer.

If your team was playing in the ‘granny’, and your best player was king-hit in the first 10 minutes and unable to return to the field, how would you feel about that?

I know I would.

I had a chat with Gerard Healy about this on Monday. He’s a big advocate of introducing send-offs.

He noted how societal changes are increasingly influencing the debate. He reckons that after the Cameron hit on Andrews something like 30 per cent more people were in favour of red cards than before. The total might be closer to 80 per cent now after Gaff. It would be interesting to see a poll.

What’s clear to me is that the red card debate is more relevant now than at any other time in our game’s history. With player welfare a major issue these days – and rightly so – you can’t have a scenario that essentially rewards wrongdoing.

It will be interesting to see where we go from here.