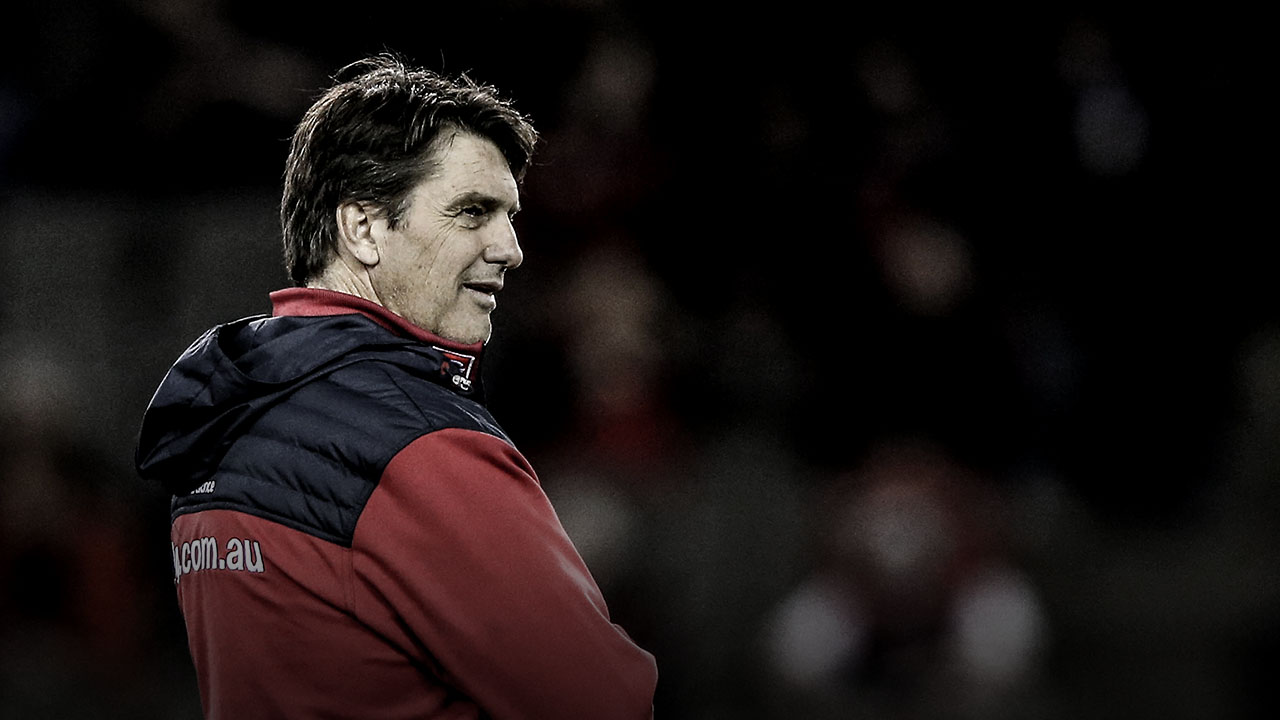 Let’s be frank about GWS

Let’s be frank about GWS

Football clubs are tribal places. And after the hasty conception and hurried birth of the GWS Giants as the AFL’s 18th child, the Sydney Swans went into full battle mode to defend their turf.

First, a declaration. Despite disrespectful and, frankly, insulting suggestions to the contrary, I have no personal agenda, vendetta or bias against the Giants – no matter how generous the draft and academy concessions and everything else they received from the league in their early days. Once created, everyone knew the Giants were never going to be allowed to fail.

But the Giants were naive enough to think the Swans would just take things lying down, perhaps even roll out the red carpet in hard-won NSW territory. We’d just be unbelievably supportive of the new kids in town, right? Wrong. Their first coach, Kevin Sheedy, is one of the most combative people I’ve met in my almost four decades in footy, so that was never going to happen.

If there was any resentment on my behalf, given the amount of time and work and effort the Swans had put into developing the sport at all levels in NSW, the lack of respect we received around that time, the lack of respect for us as a footy club, was probably the main thing.

I was coaching the Swans and I then worked for the Swans’ Academy, so I was employed by a football club in direct competition with the Giants. When you have a club hat on you’re very tribal, especially when you feel your area is being infringed upon. I remember them giving away Giants jumpers in some of our Academy areas and the AFL would do nothing about it. Nothing. In our zone.

Then they started creeping closer and closer and you’d wonder whether the AFL were actually trying to create a second team in Sydney or just utilising all the Swans supporters. So there’s a little bit of history in terms of where they set up, the fact they got Albury and Wagga as part of their Academy zone, and we got the non-traditional football areas of the state. But, again, that all happened when I was employed by the Sydney Swans. You’re protecting your turf.

If there was any resentment on my behalf, given the amount of time and work and effort the Swans had put into developing the sport at all levels in NSW, the lack of respect we received around that time, the lack of respect for us as a footy club, was probably the main thing.

And now? I genuinely see GWS as one team in the competition. I have no animosity, no ill-feeling, I’m completely objective when I talk about them. This is my fourth year back in Melbourne, I grew up in Melbourne, I barrack for Melbourne, go to Melbourne games with a Melbourne scarf on when I’m not working, and that’s why all this surprises me.

The Giants are just one of 18 teams, and that’s the way I treat them. If they were to win a premiership, fine. I’d rather Melbourne win it, but it wouldn’t concern me from a historical point of view one bit.

Let’s be perfectly frank. The reason the Giants exist is because North Melbourne didn’t go to the Gold Coast. I didn’t rewrite history. If North Melbourne had gone to the Gold Coast there would have still been 16 teams. North Melbourne refused to go to the Gold Coast, so what did Andrew Demetriou do? He created a new team. What happened then? ‘You can’t have a 17-team competition, so we’ll put a team down in Blacktown’. That’s how they were created. There was no real blueprint. The expansion was accelerated. So then, based on the acceleration, clearly the AFL had to make it work pretty quickly, because they’ve just put a team on the Gold Coast, and then almost out of the blue they’ve created the Giants. So they had to create an environment where they were going to be successful really, really fast. We all knew that.

But I suppose when you’re in Sydney, and seeing how hard it was for Sydney and how little support they got in their early days and how we continually banged our head against the wall, against the AFL, some of the concessions were hard to take. Because at one stage Andrew Ireland went to the AFL and asked for the whole of NSW as our recruiting zone. We said, ‘We will drop out of the draft if you give us NSW’, so we were desperate to develop NSW, and then to hear some of the criticism from the Giants’ people in the early days of, ‘The Swans have done nothing development-wise’ was a long way from the truth. We set up our Academy with $1 million a year; they set up theirs basically just utilising the AFL system that was already in place.

The recent comments by CEO Dave Matthews and Sheedy are just disappointing, because they’re completely irrelevant to what I do now, and, to be honest, completely disrespectful. I have no allegiance at all to Sydney. I coached Melbourne for three years and I’m now working in the media. Clearly, I’m a Swans premiership coach and good friends with John Longmire and Jarrad McVeigh and a lot of those guys, but in terms of the integrity of what I do, all the comments that I make about the Giants are objective comments around them as a football team and how they play. They have nothing whatsoever to do with the six years I was employed by Sydney. And I think from an industry point of view, it’s more a reflection of Dave. And I don’t know why: whether they’re insecure as a footy club, or whatever.

I was staggered by the accusations. It’s just ludicrous. And it makes me angry, because what it says to you is, ‘Paul Roos doesn’t take his job in the media seriously, he’s not doing his job properly, because he can’t be objective about our footy team’. That’s effectively what Dave Matthews said, and it is completely insulting to me as a professional.

We all know Sheeds is a showman, but probably the strangest thing about Sheeds’ comments is that he’s actually employed by Essendon now – he’s not even employed by the Giants any more. But I understand. Sheeds has been one of the great entertainers, and great ambassadors for footy. It’s when Dave Matthews says it that it really attacks your integrity. I got a lot of text messages about Dave from people who were really supportive of me, and I think it says more about him; how he’s seen in the industry. I wouldn’t even bother speaking to him if I saw him, because I have zero respect for him now. It’s just completely childish and unnecessary.

The Giants have obviously got enormous talent, and I think Leon Cameron’s done a fantastic job the way he’s brought the players together. I like the way he coaches. What hurt the Giants’ last year was the pre-finals bye, and then winning in the first week. For the first time ever, the two teams that went through to the prelim didn’t make the Grand Final, because of the pre-finals bye. So they happened to be in really good form, but only played one game in a month, which made it very, very difficult. If they can get it together, they can win the premiership this year.

The Giants are just one of 18 teams, and that’s the way I treat them. If they were to win a premiership, fine. I’d rather Melbourne win it, but it wouldn’t concern me from a historical point of view one bit.

Do they have the right gameplan? I think when they play their best football they do. They have some flaws – their forward pressure, they don’t have tacklers inside the forward line, they don’t win the territory battle. When the ball hits the ground in the Giants’ forward line, if they don’t score, it comes back out pretty quickly.

But I think this year more than any year, the top teams have come back to the field, because of the evenness of the competition. The draft and salary cap and all those things are firmly kicking in after the compromised drafts. All the top teams have some flaws in their games, and the Giants do, too. But I think their best is good enough to win it. Absolutely.