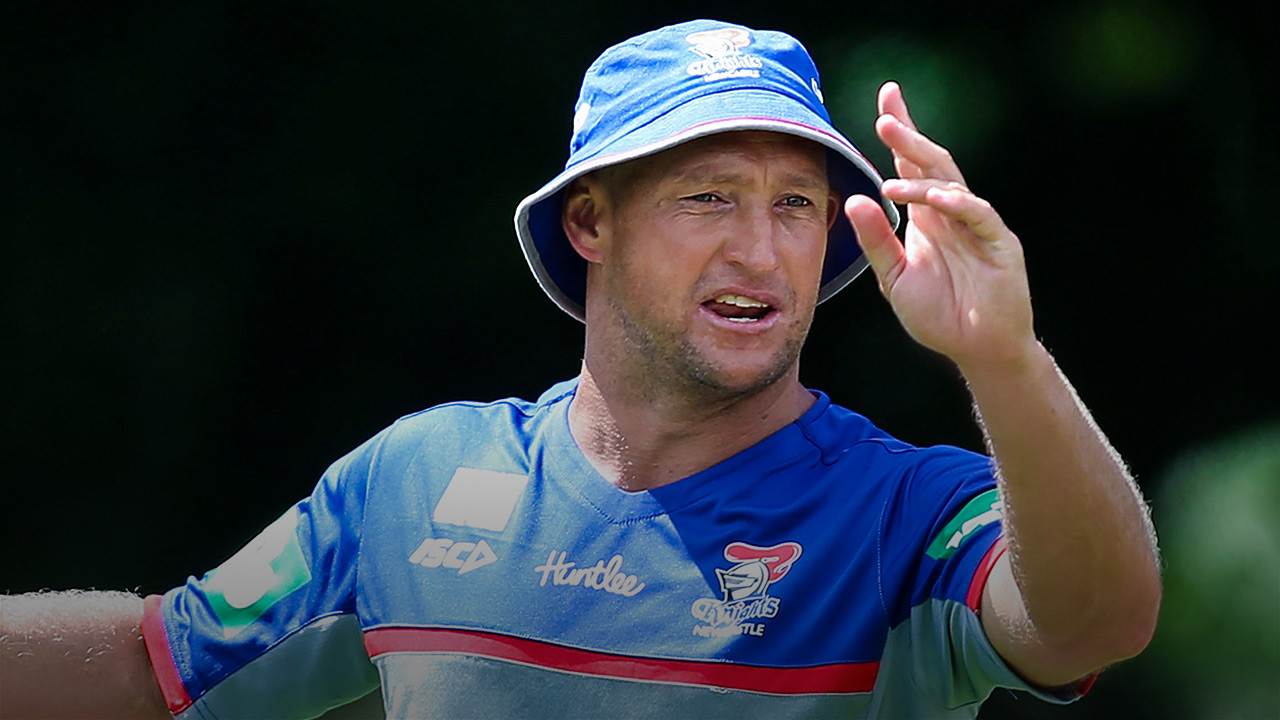 When hope returned to Newcastle

When hope returned to Newcastle

We’re going to get prime time from Mitchell Pearce.

The next four or five years will be the best of his career and the Newcastle Knights are going to be the beneficiaries. There was a time when you’d baulk at signing a 28-year-old to a long-term contract. But those times have gone. That’s still young for a top halfback now.

Look at the Australian halves pairing of the last few years – Johnathan Thurston and Cooper Cronk.

They’re both 34, but the only reason they won’t be playing for Australia again next season is that they’ve each made the choice to retire from rep footy. They’d still be there otherwise.

Dramatic improvements in sports science and rehabilitation methods are obviously big factors in players being able to extend their careers, but attitude is just as important.

It’s a different world and we’re seeing proof of it everywhere. A lot of NRL fans are also NFL fans and rugby league has borrowed a lot from American football over the years. Tom Brady is arguably the greatest quarterback ever and he’s still playing for the New England Patriots at 40.

We’ve had Mitch at the Knights for a couple of weeks now and the coaching staff and playing group have all been very impressed with what we’ve seen. It’s still relatively early in the pre-season and we haven’t played a game, but the signs are great.

Mitch has had his share of knockers over the course of his career, but he has always bounced back to perform at a high level.

One thing we knew before we started negotiating with him, and which was important to know so we didn’t waste our time, was that he was a good, honest bloke.

We made it very clear to him not to bother coming up the highway for a chat with us if he didn’t really have any interest and was going to use it as part of a process to boost his price at another club.

We told him, ‘We can handle it if you don’t want to come to the Knights and if that’s the case we’d rather you say it and not get our hopes up.’

But he came up and explained to us where he was at. Darren Mooney, the football manager at the Knights, and Phil Gardner, the CEO of the Wests Group that has taken over the club, were at the meeting as well. Mitch arrived on his own.

Mitch has had his share of knockers over the course of his career, but he has always bounced back to perform at a high level.

He said he’d already met with two clubs, which were obviously Cronulla and Manly. Cronulla won the grand final in 2016 and Manly were only a shandy off making the top four this year.

We couldn’t sit there and tell Mitch we had a more experienced and better roster than either of those clubs. But we could tell him our plan for the future and that it was real.

We talked about who we’d already signed and why, the young players coming through at the Knights and which blokes in other positions we’d be looking to target if he did come. We’ve still got room to move on our roster.

We told him what the club and the team and the town are all about and that it was really important every player we signed understood he represented the community above everything.

When he left to drive back to Sydney, Mitch said he’d make no promises but would genuinely think about it. I thought we were at least a decent shot after that.

GALLERY | Check out all the best photos from Mitchell Pearce's first day at the Club.

Our offer to Mitchell was better than what the other two clubs offered, but not by the amount some people are making out. When you take into account what the taxman takes from the money a blue-chip player like Mitchell earns, he still had a decision to make.

Mitch came here for the right reasons. He’s happy and having a great impact on our squad.

I’ve come to understand what Newcastle is all about from living up here. Mitch will, too. The Johns boys and Danny Buderus started that process by explaining the relationship between the town and the team to him. We really are all in it together.

They volunteered to talk to him on the club’s behalf because they firmly believe they, as former Knights champions, owe the city of Newcastle rather than Newcastle owing them for the great careers they had here. You don’t come across that every day.

Knights fans will support Mitch. He won’t cop the stick he has sometimes copped in the past. The people here back their players if they compete hard. That’s what they appreciate more than anything. And Mitchell always competes hard.

Mitch is like his Dad in that area. Junior was one of the great competitors. But if your Dad was a big-name player it’s inevitable that people’s expectations of you are high and that leads to pressure. Mitch has felt that from the day he made his first-grade debut.

Sometimes that pressure is unfair and I think we all know there have been plenty of times after a loss when Mitch has copped more than his fair share of the blame. Sometimes he hasn’t gotten enough credit for the wins as well.

But that’s footy and Mitch understands. Mentally, he has always appeared to respond well. He comes to us as a player who trains hard all the time, is always looking for a way to win and is a really good organiser who can help the players around him improve.

I’ve come to understand what Newcastle is all about from living up here. Mitch will, too. The Johns boys and Danny Buderus started that process by explaining the relationship between the town and the team to him. We really are all in it together.

I see some similarities in my own history and Mitchell’s that tell me this move is going to make him an even better player.

He’s been at the Roosters since he was 17, his whole professional career. I was at the Dragons for 16 or 17 years as a player and then coach. After that I went to coach Huddersfield, which was a struggling English club, and I learned so much. It was great for my career.

Different club, different circumstances. By leaving the Roosters, Mitch is signalling he’s ready to take on new responsibilities and adapt to situations he hasn’t found himself in before. We’ll learn a lot from him and hopefully he’ll get plenty out of being a part of our organisation.

A time for optimism

There’s a buzz around town at the moment, a real sense of anticipation about next season.  People are excited and that’s good. They should be. There’s excitement at the club as well, but it’s more restrained in the knowledge of just how difficult it is to make a big leap.

Mitchell’s got a lot of experience, but our five-eighths, whether it be Connor Watson, Brock Lamb or Jack Cogger, are young, developing players. At fullback, Kalyn is a wonderful talent, but he’s played less than 10 first-grade games.

Danny Levi’s had two years of hooker in first grade and he’ll be competing for the position with Slade Griffin, who came off the bench for the Storm in their grand final win last year but still hasn’t played a lot of first grade.

Compare that to, say, Mitch’s old club, the Roosters, who we’ll play in round three. They’ve got Cooper Cronk and Luke Keary in the halves, Jake Friend at hooker and James Tedesco at fullback. That’s a big edge in experience. So what we’ve got to understand is that it’s going to take time.

The basis is there now, though, and with players signed to long-term contracts there won’t be any chopping and changing in the key positions over the next four or five years, which will give the players a great opportunity to build combinations with each other.

You’ve got to be able to do that if you want to become a contender.

If you look back at the last great Newcastle sides, with Joey, Matty, Robbie O’Davis, Danny Buderus, Paul Harragon, Steve Simpson and many others, they played together for three or four years before they developed their combinations and won comps in 1997 and 2001.

Clubs like Melbourne and Brisbane have proved that if you want sustained success you must have the players in key positions staying together for long periods of time.

We’ve got the parts in place to take us forward over the next four or five years.  Now’s the time we start to advance in terms of results, but without getting too far ahead of ourselves.

People are saying we should be making the finals next season and of course we’d love to, but it’s not about me saying to the guys, ‘We should win 12 games,’ or, ‘We should win 15,’ or whatever. It’s about coming together as a group as quickly as possible, building combinations and competing hard.

Where that takes us, we’ll see, but the fact is we’re still coming from the bottom of the competition so it’s a long way to the top.

Our other new signings are all going to play a big part, along with Mitchell, Kalyn and Connor.

Now we can start going after consistent results and sustainability. There’s a lot of energy in the club, a lot of life. Over time, with players getting more experienced and some more good recruitment decisions, we can give the town something to cheer about.

Mitch is our marquee signing. We plan to develop other marquee players from some of our younger guys, as the Knights did in the 1990s with the Johns boys, O’Davis, Buderus and others.

This is all part of the grand plan to get us where every club wants to go: the promised land.