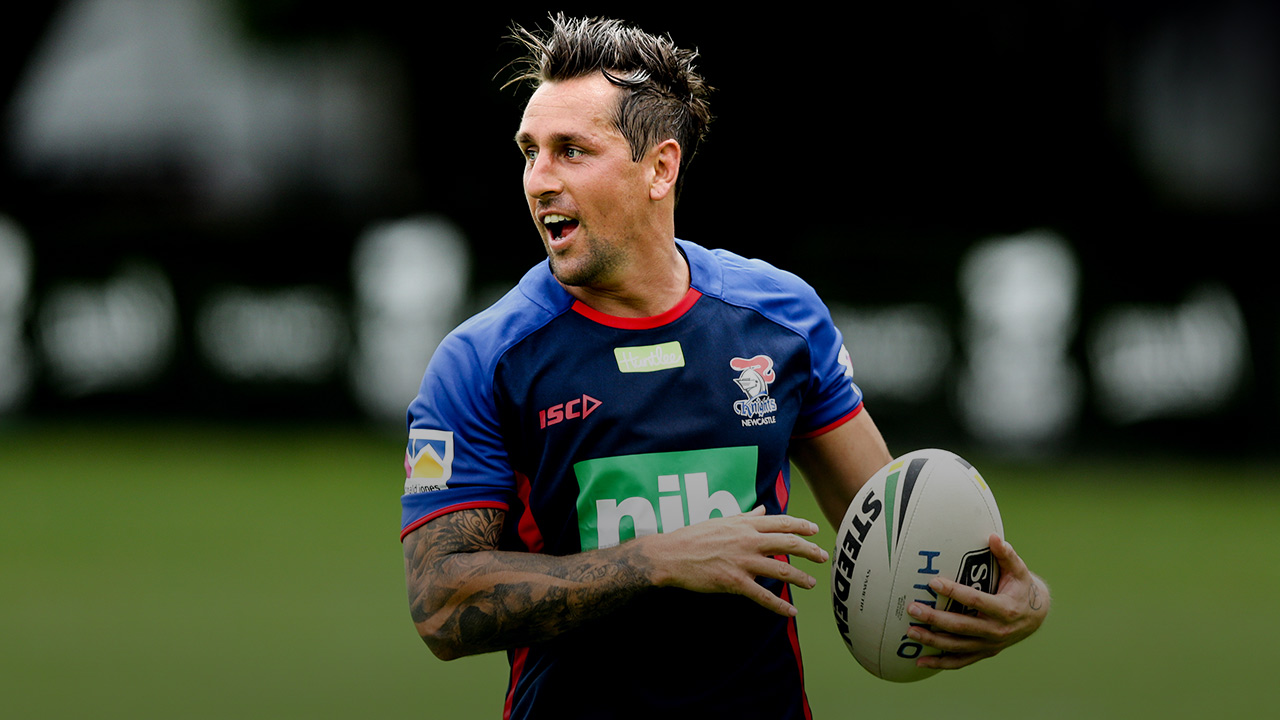 Something special is happening here

Something special is happening here

Change makes you grow, and I’ve grown up a lot over these last few months.

I made a pact with myself that I wanted to make the decision about my next club on my own, trust those instincts and back them all the way. It was the first time in my career I have made a choice like this. I listened to other people – family, friends and those I respect – but it was my decision ultimately.

You know how sometimes you make a choice in life and it just doesn’t sit well with you? This is the opposite of that. Since I’ve come up here to start training, I’ve had this feeling of knowing I have 100 percent done the right thing.

Even putting on the Knights jersey for the first time for the trial game against the Storm last weekend felt good. Surreal, a little bit weird, but definitely good. I’m not going to make any bold predictions about the season ahead, but I can say that I’m as motivated as I’ve ever been at any point in my career.

When you’re at the one club for a long time, you can fall into a bit of routine and a comfort zone. It’s not a conscious thing. It just happens because you know everyone so well and been a part of the environment for so long.

The last time I felt this – that feeling of coming to a new club, meeting new people, learning a new way of doing things – was when I first started playing for the Roosters more than a decade ago.

I’ve heard a few players through the years talk about that new lease on life they feel when they change clubs. You’ve got new people to impress and you’ve got to earn respect and trust all over again.

I feel excited and free. And I’m already in love with this city.

Everyone is a bit more laid back and not as pretentious as Sydney. They love their footy and live for the Knights. They expect their players to work hard and have a dig for the city. In return, they take you in as one of their own. You really want to play for the people.

It’s like a fishbowl, but in a good way. Everyone wants to chat about footy. It all comes from a good place.

If I go to Woolies or Merewether Baths or the beach, people are coming up to me and being super-friendly and positive. I’m soaking up the love at the moment. I just hope we have a good start to the season so it stays like this!

I had an open mind about my next destination.

When you’ve been at one club for so long, you close your thinking to what other opportunities might be out there. I wasn’t sold on one place. I was keen to meet, listen and hear their visions.

I was flattered and very appreciative of the respect I was given by Cronulla, Manly and Newcastle. It was a nice feeling, especially after leaving the Roosters pretty suddenly.

I’m mates with a lot of the Cronulla boys and they are players I respect. They’ve got an experienced, super-professional team and a great staff. If I went there, I knew there was potential for instant success.

I have a lot of respect for Trent Barrett at Manly, too. We played Origin together when I was younger and we get on well. He’s got a great team and he’s got them headed in the right direction.

Newcastle was a very different challenge.

I feel excited and free. And I’m already in love with this city.

To be honest, I wasn’t sure what to expect when I drove up there to meet with Nathan Brown. Obviously, the last couple of years haven’t been super successful for the Knights but when I was speaking to the old Roosters boys – Shaun Kenny-Dowell, Connor Watson and Aiden Guerra – they spoke really positively about the club and its direction.

Browny wasn’t trying to be a salesman. He didn’t bullshit me. He knew shifting to Newcastle would be a big move for me – and they probably weren’t sure where my head was at – but he was straight about the position the club was in, what they had planned and how I could help with that.

He has played the long game over the last couple of seasons. He has blooded lots of young players rather than go for the quick fix. They’re starting to reap the rewards for that. The thought of helping take that to the next level was exciting.

The chat with Browny motivated me.

I drove away from Newcastle with a good feeling. Something about it all just felt right.

As a kid, I always had a soft spot for Newcastle. I loved the Johns brothers and I used to study the way Joey and Matty played. I watched the 1997 and 2001 grand finals more than any other.

I wasn’t a Knights fan growing up – it was always going to be hard not to go for the Tigers in my family! – but I loved what Newcastle were about. Even when I was at the Roosters, I’ve admired the city and the way the people of Newcastle get behind their team. They’re really parochial. It’s a different feeling to anywhere else we played.

Matty and Joey gave me a call around the time I met with the Knights and Matty and I ended up having quite a deep conversation.

We spoke about the direction of my career and where I was at this point in my life. He said Newcastle would be good for me in terms of the lifestyle, the town, the footy culture and the playing roster they’re building.

He said, ‘I feel like you’ll enjoy your footy more than ever if you’re playing in Newcastle. It’s a different type of pressure. You’ll blossom there.’

It was a different way of looking at things.

Even when I was at the Roosters, I’ve admired the city and the way the people of Newcastle get behind their team. They’re really parochial. It’s a different feeling to anywhere else we played.

I also spoke to Danny Buderus, Clint Newton and Kurt Gidley when I arrived up here. I’m a pretty passionate person myself and it was awesome to see just how much the old boys cared for the club and what they were prepared to do to make it succeed.

There were obviously a lot of other considerations that went into signing with the Knights, but I will say that the chats with those guys certainly lit a fire within me.

The old boys community up here is awesome. I’ve bumped into Mark Hughes a few times around town, same with Bedsy, and Luke Davico runs a café up on Darby St.

I grew up watching these blokes on TV and I have tons of respect for them. They lived and breathed the Knights back then and they still do now. Their passion is incredible. For them to take me in and offer advice and support the way they have has been pretty overwhelming, to be honest.

You don’t get that with Sydney clubs. Not to this level.

At the Roosters, we were playing to reach the top four and win the comp every season. More often than not, you knew what to expect from us.

It’s more of an unknown here. It’s a bit of a project. That’s what excites me.

We’re building something, rather than trying to hold onto something. I like the jigsaw puzzle pieces Browny has assembled and now it’s about ironing out our combinations and putting the picture together.

I learned a certain way of playing footy over time at the Roosters. The move has opened me up to different ways of thinking from Browny. Different systems, different plays, different areas of my own game that I can improve.

I’ve been really impressed with how technically sharp Browny is, especially in attack, and how all the boys are educated and well drilled. I’ve learned a lot and I’ve enjoyed watching the squad get a little bit better every day through the pre-season.

Having a few of the old Roosters boys has made the transition easier. We know each other’s games back-to-front. Two of them are in the leadership group with me – Aiden and Skids – and Connor and I are mates. It definitely helps.

The influence Jacob Lillyman and Chris Heighington have had on the group has been awesome. You can have all the creative and attacking flair in the world, but you’ll get found out eventually without those older, harder guys.

Kalyn Ponga is as naturally talented a player as you’ll ever see. He reminds me a bit of Roger Tuivasa-Sheck in his breakthrough season.

He’s got footwork, vision, power … the lot. And the thing that’s most impressive is he knows when to use those gifts – and when not to.

Sometimes, you’ll see a kid come along with brilliant footwork and he’ll tend to overplay his hand a bit. Kalyn isn’t like that. He’s a cool head, a composed thinker, and he reads the game really well. That’s unique for a player his age.

It’s a big call, but I can see him eventually taking on that ball-playing fullback/five-eighth role like Darren Lockyer used to. Hopefully, we’ll be right in most games this season, and I reckon Kalyn will win us a few of those with a little piece of brilliance.

We’ve been working hard on our combinations and it was nice to see that come together in the trial game against the Storm. Kalyn, Connor and Brock Lamb in the second half showed they had developed a good understanding of each other, and the players around them.

Brock is a great player. It’s been enjoyable having a group of halves with him and Jack Cogger and me all pushing each other. Everyone is a potential starter. It definitely keeps you on your toes.

I’m excited for Connor, too. He’s got a real chance to show his talent after a few seasons of limited game time. He and Kalyn will be dangerous together.

Winning a pre-season trial is nothing to do handstands over, but the confidence of winning that game and seeing our combinations come together has been great for the group. There’s always that little bit of doubt with a new combination until you’ve played together. We’ve done that now and we’re happy with what we’ve seen.

It wasn’t just our attacking game that impressed me. The effort areas were all there, too. We’ve worked hard on our discipline and our defence has improved each week throughout the pre-season. The coaches have been really driving that.

I can’t wait to see how it all plays out.