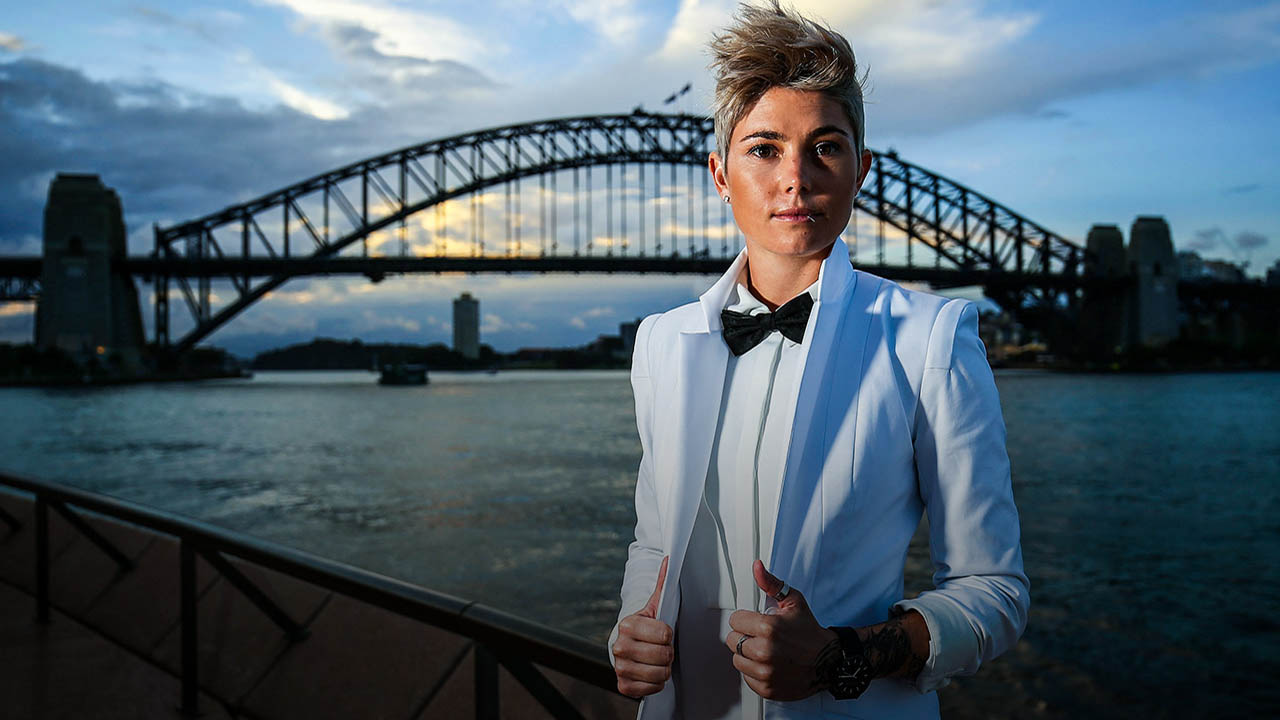 I haven’t felt the need to see our sports psych at the Matildas for more than a month now, which is a pretty good run for me. There was a time there when I was seeing her so often I was wearing out the seat in her office! But it’s all good.

One of the best things our coach, Alen Stajcic, has done is bring a psych in full-time with the squad. He told her straight away, ‘Watch out, Michelle’s going to be your number one customer,’ because he knows what I’m like.

I’ve come to learn the value of talking to a qualified expert about what’s going on inside my head.

I’m probably like a lot of people in that I used to think I was crazy. But it was actually anxiety I was suffering from and, until I knew that and started learning how to deal with it, I couldn’t get my life in order.

I’m still learning, and I’ve really been tested this year by my first major injury. But I’ve got structures in place now that allow me to identify what steps to take if I’m feeling uncomfortable.

IT WON’T FEEL THIS BAD FOREVER

It’s been such a joy to be able to get back to hard training and now playing again for Canberra United in the W-League after being out since I wrecked my ankle last December.

I was waiting for the Matildas squad to be named for the two games we are about to play against China and as each day went by, I was saying to myself, ‘Oh, just tell us!’

Then they named it and I was in. It was all I wanted.

I felt like I needed to get back in the squad just to be myself again. I see myself as a Matilda and having so much time away from the squad does mess with your head a bit.

I’ve been enjoying my football and scoring goals – and everything off the field is going well too. I’m happy and feeling positive, so I haven’t had to see the psych recently.

But at my lowest times when I was struggling to get over the ankle injury and didn’t feel like I was making any progress, seeing her was massively important for me. She would tell me a way of dealing with things that was so clear and simple it makes you think you should be able to realise it yourself, but you can’t because you’re so stressed out that your thoughts are running wild.

The main point she made was that it won’t feel this bad forever, and I was like, ‘Yeah, that’s true, it will take time to heal, but it will heal.’

It was that simple, but I was missing playing so much that I was desperately trying to get back for this game or that tournament and I’d lost sight of the big picture, which was making sure I was 100 per cent fit for the Asian Cup next year.

Honestly, it was like she switched a light on for me.

The more I pushed my body, the worse my ankle was going to feel and I risked pushing myself out of that big picture by trying too hard. Sometimes, as hard as it is for an athlete to have some time off, it’s what your body really needs and you have to listen to it.

So I said to myself: ‘OK, Michelle, you’re not going to make this game coming up, or that tournament, it’s just common sense that you can’t, so now your focus is the Asian Cup. Be at your best for that, make that your goal.’

It wasn’t rocket science, but I couldn’t see it. I needed someone to pull the blinds back for me.

WHY I NEARLY QUIT

I first started seeing a psych after my cousin, Aaron Pinilla, died in 2013. He was the reason I got into soccer as a kid, because his team needed a player. His mum called my mum and away I went. I haven’t stopped playing since.

Aaron and I were very close. We were born a couple of months apart and had known each other since we were babies. We lived a five-minute walk from each other.

I moved from the NSW South Coast to Sydney at 18 for football and we didn’t get to see each other as often as we would have liked after that, but we always kept in touch.

I had missed out on so much time I could’ve spent hanging out with him, and that hit home.

I thought, ‘It’s just a game, life’s too short.’ But then Aaron’s best friend contacted me and said, ‘I just want to let you know Aaron loved you so much and would constantly talk about you and was so proud of you and your football.’

That made me realise I didn’t have to stop playing the game we started playing together just because Aaron had died. He wouldn’t have wanted that. But I needed to talk to someone about all of these things I was feeling, so I went to see a psych at the Institute of Sport in Canberra.

I was confused about my emotions. Before that it was easy: if I was happy I’d smile and if I was sad I’d cry. But this was something different and I couldn’t understand it.

The psych explained what I would be feeling in my mind if I was angry – and that was it, that was how I felt. I was angry this had happened to Aaron.

She said it was OK to feel that way and that were no rules about how long you could grieve and be upset. She said, ‘You were best friends, you were attached at the hip, you’ll feel this a lot harder than a lot of other people will.’

I’m such a positive person by nature that I hate to focus on negatives. I tell myself, ‘No, no, no, this isn’t who I am, I can’t do that’.

But the psych said you can be angry. It’s natural to be upset. Only time will heal it.

I slowly started to understand things after that, but I was broken for a long time.

Seeing sports psychs taught me how to build structure in my life. When I was 25 or 26, I was stressing about life after football and whether I’d have no job, no money and no prospects. Now I’m 29 and a lot of things are happening for me.

I’ve got my MH23 clothing line, I’m putting a football academy together and I’ve got regular public speaking engagements. I’ve bought my own home and, even though I’ve got a mortgage to deal with, I’m saving to buy a second.

The psychs tell you up front where you’re going wrong. Probably the most important message to me was to stop wasting time.

My mind was so focused on football that I didn’t think about anything else, even when I wasn’t playing or training. She said, ‘You’ll go crazy if you keep doing that.’ She said to be strict about spending four hours a day working on something else that makes me happy. So I did.

Now I have my own business and I’ve met some amazing people who are very successful and influential and who want to help me. That is such a big advantage in life.

Seeing sports psychs taught me how to build structure in my life. When I was 25 or 26, I was stressing about life after football and whether I’d have no job, no money and no prospects. Now I’m 29 and a lot of things are happening for me.

I have an amazing mentor, Tanya Sale from Outsource Financial, who has shown me the way. She has helped me grow as a person and is teaching me to become a businesswoman. She also has me speak at her company’s functions because she believes in me and says my story is powerful.

I didn’t think I could ever get up in front of people and speak. I was scared to do it at school, but at school I had no idea what I was talking about. I wasn’t big on study. This is about getting up and talking about myself and working as part of a team, and I know that subject. I can’t get it wrong.

I met Jaimie Fuller at the Rainbow Laces launch. I think he loved my smile and my attitude. He’s the CEO of Skins Australia and he’s my mate. Whenever he’s in Canberra, we meet up for a coffee.

My manager, Cade Brown, is another real role model for me. He has always encouraged me to believe in myself and be true to myself. These are great strengths to have as a person.

GET IT OFF YOUR CHEST

The sports psychs and people like Tanya, Jaimie and Cade have taught me that stressing about the future is just going to continue if you don’t plan for the future.

Sometimes we stress about things that don’t even matter and it’s dumb to weigh yourself down like that. I’ve learned the value of getting things off your chest and that’s what I advise people to do. If you don’t, it’ll just eat you up inside.

They told me at high school I pretty much had no future unless I was going to play sport. I’m about proving those people wrong.

There’s still plenty of football left in me, but I’ll be ready for life after football, when the time comes. I aim to be the best at whatever I do.