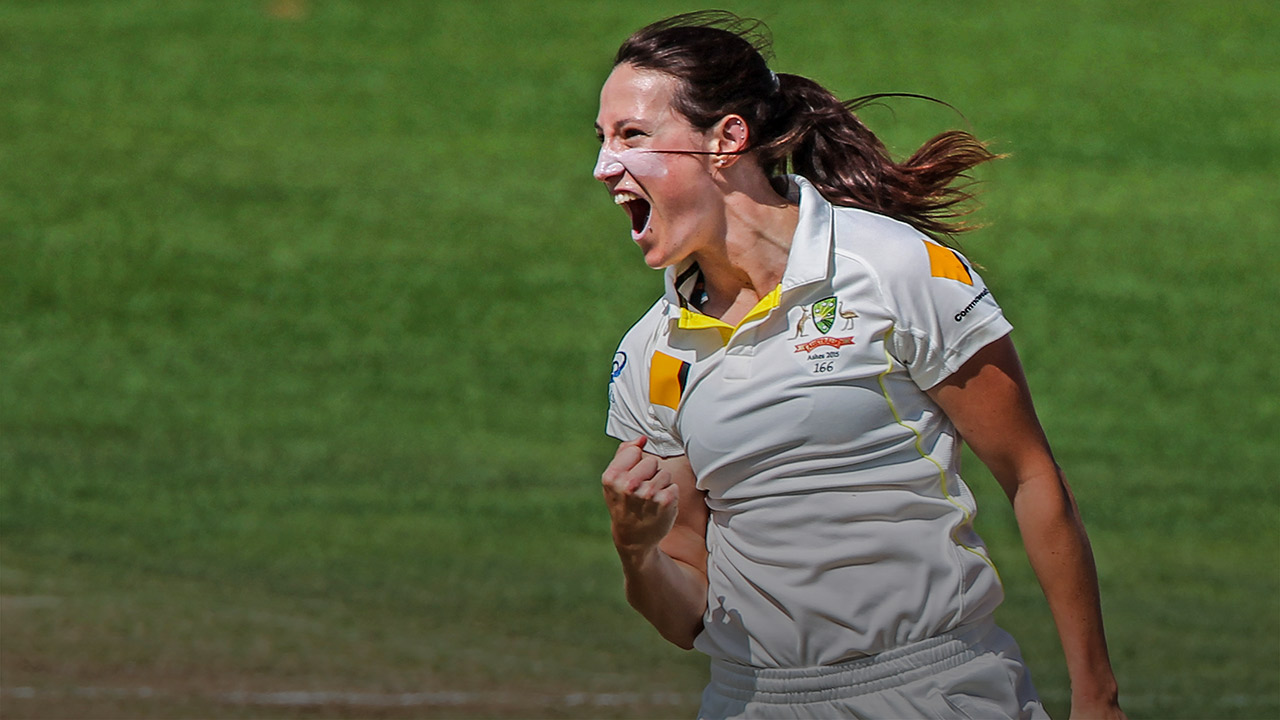 I never cried when I was growing up. I never saw my dad cry, and I thought crying was weakness. But 100 per cent, I shed a tear on December 7 when same-sex marriage was legalised.

I was on a plane at the time, so my phone was actually turned off as the proceedings started. When I landed, I had all these messages from people saying ‘congrats, this is it’ and I was like ‘holy crap, this is finally the day’. And that’s when I shed a few tears.

It was a massive day. For it to happen so quickly after the yes vote was pretty overwhelming, and I think the 7th of December is always going to be etched in my history books.

The NO campaign was pretty horrible to be honest. Three-and-a-half months of bullying. There were so many negative things. The blocked list on my Twitter is pretty bloody long now. They even had NO campaign ads on TV during the Ashes series, which kind of broke my heart. I’ve always thought of myself as pretty resilient and a mentally strong person who doesn’t really give a shit what people think, but I was pretty offended by that.

I tried to do as much as I could for the YES campaign. I’ve tried to be pretty vociferous on Facebook and Twitter, and I went to the Brisbane same-sex marriage rally with a sign that I made. It took a lot of time to make the sign. It was a fist in rainbow colours that said “YES”, which I thought looked pretty cool to be honest. It took a couple of hours of artwork. I’m quite pedantic about how I do things, I had to get my lines all right, and it took longer that I’d expected but it turned out all right in the end. I have new respect for people who make signs in the crowd at the cricket. I understand the effort they go to now.

Today I marched for Marriage Equality… An empowering feeling being amongst thousands of others who want the same thing. Be on the right side of history, do the right thing – Vote yes ??? So I can marry the one I love please ❤️?#marriageequality #letmemarryher #voteyes #loveislove

The rally was incredible. To be with 15 or 20 thousand people in the streets all fighting for the same thing was really empowering. It was incredible to be there, to be sending the message that the vote was about people, you know? There are actually people involved in same-sex relationships. You’re not just voting on something, you’re voting on someone. That’s how I saw it and I wanted to make my opinion known.

I’m just really proud that the law finally got passed. To see only four MPs voting against it on the day kind of made my heart melt. It’s been a pretty emotional time, a lot harder than what I thought it was going to be.

Cricket Australia has been really supportive. I look at the crest now and I feel so proud to play for a country that allows me to marry the person I love. Every game you play in the green and gold is special, and to put on those colours is incredible. But to have a country itself that finally says ‘we consider you equal by law’ is even better. I already thought that Australians were pretty accepting of me and my relationship, but to be united under law is pretty special.

THE RISE OF RESPECT

Growing up, I had no thoughts of playing for Australia. I started in the Under 13s and I was lucky we had pretty good junior formats. But there was no women’s cricket on television and nothing was really advertised about it. I honestly had no idea what I wanted to do anyway, but I didn’t think I’d ever be good enough to play for Australia since I didn’t know what the top level looked like.

Aussie fast bowler Holly Ferling once said – and I think it’s one of the best things she ever said – ‘you can’t be what you can’t see’.

Personally, I’m lucky that they saw me. I was playing at state level in the national competition and I got called up to the Shooting Stars side which was the Australian second XI at the time. It was quite a young side, and we went over to New Zealand and it was a pretty average tour for me. But then we had another series against them in Australia later in the year and I happened to do well, and I got called up for Australia.

My debut wasn’t anything special, I didn’t take a wicket and I thought ‘great, I won’t be playing tomorrow’, but they said yeah you’re playing tomorrow as well and I said ‘OK’ and ‘wow’ and I took a couple of wickets and I was like ‘OK that went all right’. Then time passed and I got a phone call a couple of weeks later that they were taking me to the World Cup with only two games under my belt and it was all a bit surreal to be honest. It happened really fast.

I look at the crest now and I feel so proud to play for a country that allows me to marry the person I love.

So much has changed in the last few years. I am a full-time cricketer now and I am very blessed to be doing cricket as a full-time job. I know that a lot of the girls have taken off time from their job for the WBBL schedule, so to be in that position that you can take a couple of months off work and still be OK financially is a great place to start, and obviously us Australian girls are very lucky to be a part of the new MOU that came through this year.

I think the standard of women’s cricket is getting so much better so quickly because the Australian girls train all year round, and it’s a longer program for the state players now. I think to have the eight teams in WBBL is amazing and the fact that the schedule is so hectic and they’re pouring in so many resources, and to have the coaching that we have available now at a WBBL level, is incredible.

‘Phenomenal’ is the word I’d choose for it. To have such a rise in women’s cricket in the last two years has been incredible. To me, it’s been the rise of respect. The biggest part is to see fewer negative comments on social media and people deriding us purely because we’re women. To have people out there going ‘look, Ellyse Perry can hit the ball like David Warner’ and things like that, it’s phenomenal, and I think in every sport there’s been a shift in the way that people see women’s sport, and to have the support coming from the Australian public is awesome.

Growing up we obviously didn’t have too much exposure to female cricketers, and my idol was Glenn McGrath. It would be an absolute honour to have a kid say that about me one day. I don’t think there would be any more special feeling than that.

I like to joke around with the idea of being an all-rounder, which is why I photoshopped a little bat icon on my Strikers profile after I hit 20 runs off 10 balls the other day. I always give my coach a bit of a hard time about putting me at number 10 in the batting order although we’ve got a pretty good batting line-up, so I probably should be at 10. I like to have a muck around with photoshopping and have a joke about it, but at the end of the day I’m a bowler and I like to bat on the side and I definitely do not call myself an all-rounder. But I’d love to get there one day.

As a bowler I see myself as both a container and a Striker, pun intended. In that recent match where I hit the 20 off 10 balls, I then took 0-14 off four overs. I don’t mind taking no wickets for so few runs when we’re defending a small total, as we were that day. I’d rather that than a scorecard of 2-30. I guess it’s situational and depends on what the team needs on the day.

THE GIRL OF MY DREAMS

Jess and I don’t have a wedding date yet. But we have a roundabout time which will probably be April 2019. That gives us a year-and-a-bit to get our shit together. As long as we have a jumping castle I’ll be happy and I’m not compromising on that. It’s happening.

The jumping castle will probably not be part of the actual ceremony, but there’ll be a cool photo with our bridesmaids and stuff afterwards all jumping in a jumping castle. As an adult how often do you get to do that? I just think it would be really cool, and I know that Jess doesn’t want it, so that means we’re definitely getting it!

Jess and I just click perfectly. She is someone who balances me out and we have the same morals. She’s someone who keeps me very real and sometimes when I’m going a bit over the top about something, she’ll bring me down. I guess she’s everything I’ve ever looked for in a person, and someone who just generally makes me happy and makes me feel loved. I’ve not really felt this way before.

Happiest of Birthdays to my future wife ?❤️ Not far from 30… I'll start planning it now ? #loveofmylife #shelikesthemyoung

We’ve been to the nets a couple of times where Jess chucks the pads on and I bowl half pace and she hits me for a decent shot. Then the next ball is like 10 or 15 kms quicker just to really remind her who’s boss in the nets. Let’s just say things are more equal in the home. I’d like to think I’m the boss, but I think we’re pretty equal.

I think her love has made me a better person in general. It’s made me more compassionate and sensitive to other people’s feelings, which is something I was never good at growing up. Love teaches you to be vulnerable, and that life doesn’t revolve around you. That was something I did need to learn.