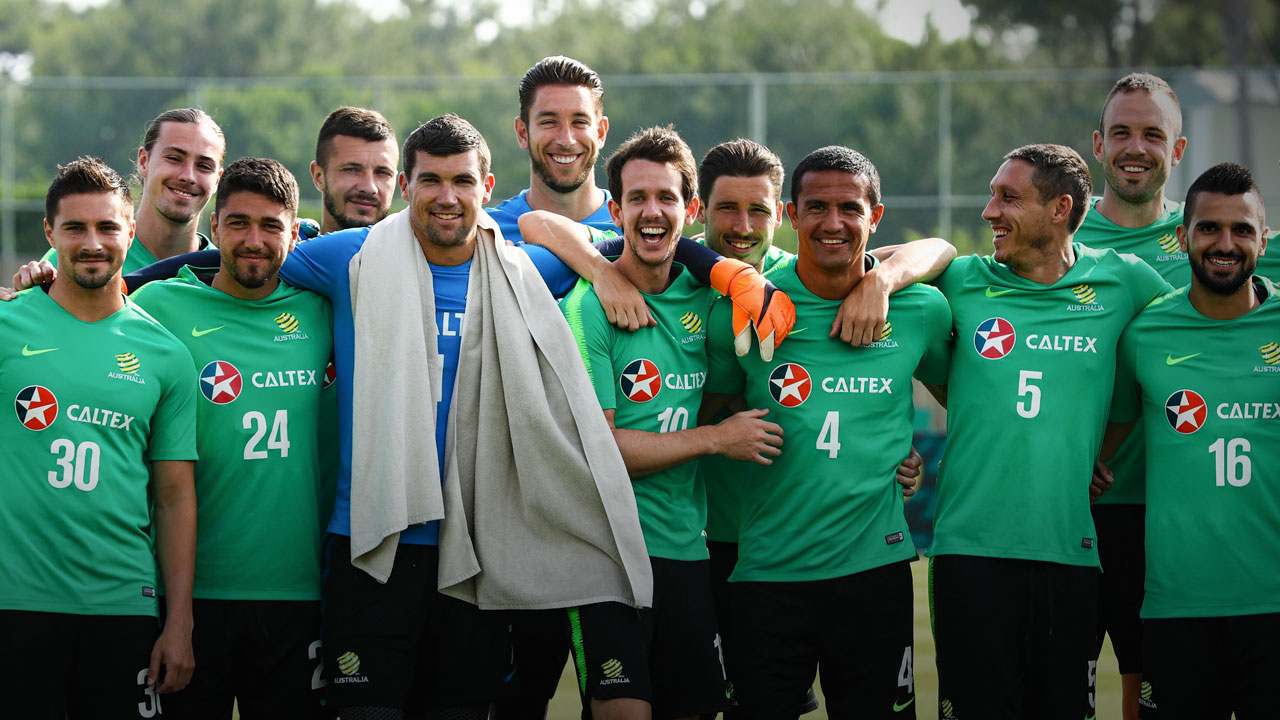 ‘The new generation of players would struggle in the Asian Cup.’ We won that.

‘The new formation would prevent us from qualifying for the World Cup.’ We’re going to Russia.

‘The new coaching change will throw a spanner in the works.’ We didn’t let that happen.

Now there’s talk about squad selections and questions about our competitiveness in a pool that features France, Denmark and Peru.

I’m not here to make promises and predictions about Russia. No one can do that. But I can tell you a few things about the Socceroos following on from the lessons of the last four years.

We wear the battle scars of the last four years with pride. We’ve been through a lot together and made it out the other side, even when the odds were stacked high against us and it felt like there wasn’t much belief in the squad beyond our own little circle.

The qualification process was an important experience for us. No team in World Cup history has played as many games, or travelled as many kilometres as the Socceroos did to get to Russia.

And yet here we are, confident and excited we can make some noise at this tournament.

If you think back to the last World Cup in Brazil, Ange Postecoglou took over the Socceroos a few months before the tournament. He made some big changes to the squad, including bringing me in. I didn’t play a huge part in the qualification process. Quite a few others were in the same boat.

We entered the World Cup without really knowing what it took to get there.

Now consider the experience this time around. Yes, Bert van Marwijk is relatively new to the post but the vast majority of the squad is the same that won the Asian Cup and qualified for Russia.

We have played together against all kinds of opponents in all kinds of conditions in pretty much every corner of the world. We have supported each other through the difficult times and celebrated as one in our moments of triumph.

Regardless of what anyone else is saying about us, I can’t help but think that all of these experiences will hold us in good stead in Russia.

I didn’t appreciate it at the time, but the World Cup in Brazil was the most transformative month of my career.

I thought I was ready. I was desperate to be the goalkeeper Australia needed me to be. I approached the games with an emphasis that I would have to raise my game to another level in order to stop the world’s best players.

It was a mistake.

As I mentioned in my last piece here, a mindset like that leads you to overthink things and takes the focus away from your own preparation. You get caught up in the team you’re playing and the threats they possess.

I was playing for Club Brugge at the time and, while it’s a good league, it’s not at the level of Spain or England or the other big competitions in Europe. That World Cup in Brazil was the first time I was face-to-face with the best in the world. I think my inexperience was evident through my performances.

I wasn’t happy with the way I played at the 2014 World Cup and I told my agent shortly afterwards that, if I was going to be able to compete with the best at the next World Cup, I needed to get into one of the biggest leagues in the world. To pit myself against the elite week in, week out.

It didn’t quite work out in Valencia in terms of getting into a rhythm, but I still learned a lot from the La Liga experience and playing against some of the biggest teams in Spain.

When my agent and I were weighing up the pros and cons of the Brighton offer in the off-season, one of the biggest determining factors was the ability to play regularly against the world’s best to prepared myself for the World Cup in Russia.

The Premier League has the slimmest margin for error in the football industry. In fact, sometimes there isn’t a margin at all. The opposition players are so good that they can punish you without you even needing to make a mistake.

There could be no better preparation for a World Cup than that. I signed with Brighton. It ended up working out better than I could’ve imagined.

Now I’ve had a full season playing against the best the Premier League has to offer and surviving relegation as a club. I’ve grown so much again this season. Competing against many of the leading players in the world has taken my own performances to a level they’ve never been at before.

The World Cup qualification process has been just as big a learning curve.

We wear the battle scars of the last four years with pride. We’ve been through a lot together and made it out the other side.

The home game against Syria is probably the most intense game I’ve played in my life. Timmy Cahill scored the two goals, including the winner in the last minute, after we conceded early to get us through. But, until that point, our whole World Cup qualification was teetering on the brink. Those are the moments that can really make a squad.

Personally, I feel like I’m in a very different place entering Russia than I was Brazil. That all comes down to experience.

I won’t be thinking, ‘We’re playing this player today, and I have to do this to stop him, blah blah blah.’ I know now I play my best when I’m believing in myself, focusing on the things I can control and letting my instincts as a goalkeeper take over.

Everything about life at the minute is feeling in balance and flowing. I’m in a great place. But I’m also aware that I can’t get complacent and take that for granted. I’ll do everything to stay in my rhythm coming off the back of the Premier League season and perform at the highest level.

In Brazil, too much of my focus was on them.

In Russia, it will be about me and our team.

Another indication of the character and resilience of our squad is the way the playing group has handled the change of coach between qualification and Russia.

We obviously went through a lot together under Ange, but respected his decision to leave after the Honduras game. Everyone wished him well with his new assignment with Yokohama.

There was no whingeing or murmuring or worrying about the change. Bert has a great resume and the players got on with the job in front of them. We see it as our responsibility to adapt to the changes he has implemented as quickly as possible.

How well we do that will go a long way to determining how successful we will be at this tournament.

That attitude speaks volumes for the DNA of this team. Courage and stoicism is bred into Australian players early. They’re as strong and adaptable as any in the world. Things don’t faze us as much as they might others.

There are plenty of teams out there who wouldn’t deal with the change as well as this group has. We flick the switch. We go.

There are leaders throughout the playing group. They set the example for us. They’ve ensured the coaching situation never became a distraction or a worry. It was a little speedbump – and anyone who has watched us in recent years will know we’ve overcome plenty of those.

We’re going to have to play the three games of our lives to progress to the next stage of the World Cup. And three out of the four teams in our group also had to survive the knockout phase of qualification, so they’ll be battle-hardened too.