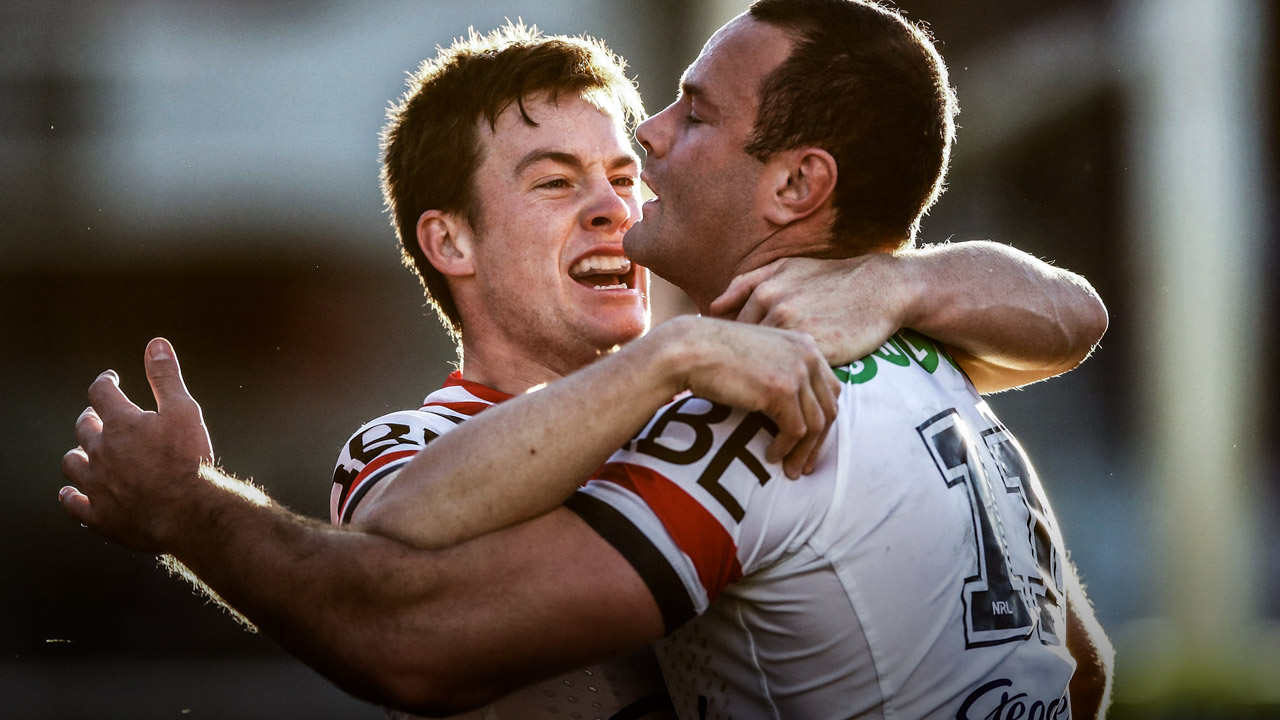 I felt a couple of little pops when I did my knee against the Dragons and that’s the first thing you think: ‘ACL’. That would have been the season.

It was a big relief when they tested me straightaway and I was sweet. It settled down after a couple of minutes and I got to walk off the field; I knew then that I’d be OK. It ended up being best-case scenario, given how it looked. Rehab is going better than I thought it would.

We’re going to have a crack at getting back for next weekend, Sunday at home against the Raiders, but we’ll see how we go. If not, then the weekend after that.

After breaking my jaw in pre-season, I missed a big chunk of our preparation and the first game. I was happy just to get out there and play footy from round two onwards. It feels like I have built a solid foundation this year.

I can’t wait to get back out there again. It’s the business end of the season and the boys are flying.

It’s very cool to see what Latrell Mitchell is becoming.

I arrived for the start of this phase of his career, when he first played in the centres last year. In 2017 pre-season, he was very raw in terms of football knowledge. To see where he is now, less than two years later, is unbelievable.

It’s a credit to him, how grounded and level-headed he is for such a talent. You see some of those young kids who never fulfil their potential, because they’ve gotten a big head or are getting in trouble off the field. Not Latrell.

There’s still improvement left in Latrell, too, which should be scary for the rest of the NRL.

Latrell has worked super-hard on his fitness. He’s a naturally athletic and gifted footballer, but you wouldn’t say he’s a naturally fit dude. I watched him in the gym during pre-season and Travis Touma, our head of performance, was giving it to him during the sessions.

He stood up every single day. Then ever since pre-season, he’s been one of our most consistent players every week.

When I think back over his past 18 months, which have had good times and bad times, he’s just turned up every single week to become a better footballer. Now, it’s really showing on the field.

Sometimes with Latrell, I don’t even need to put him in a hole, you just give him the ball and let him create one!

He went through being dropped back to NSW Cup last season, playing a couple of games with Wyong Roos. For a guy who was being hyped-up as the next Greg Inglis to not whinge or complain about that setback, when he would have been feeling so disappointed, shows his character.

A kid as talented as Latrell probably wouldn’t have been put in that situation by most clubs. To handle it the way he did – putting his head down, earning an NRL comeback and then playing so well – summed him up.

From what I’ve seen, Latrell suits the centres better than fullback, where he played some of his early games with the Roosters. He’s a big body in defence, he reads the game well, he doesn’t have to do the big chases that fullbacks do and he can still get in to the game in the centres.

I think it was a blessing in disguise, how some of the roster moves worked out; Michael Gordon coming in at fullback, and then James Tedesco. Latrell is a natural at left centre, which he’s shown for both the Roosters and NSW this season.

One-on-one, or even with two defenders on him, Latrell is a chance. As a ball-player, you’re always trying to put guys into holes. Sometimes with Latrell, I don’t even need to put him in a hole, you just give him the ball and let him create one!

To be able to create opportunities basically out of nothing is his biggest attribute.

Boyd Cordner had a spring in his step when he came back from Origin. It was his first series win as captain; his first full-stop, I guess, after he played the dead rubber of NSW’s 2014 win.

I reckon he’s playing the best footy of his career. He turns up every single day for us. Everyone at the Roosters knows that and that’s all that matters, after some of the criticism he copped before Origin from Phil Gould.

Boyd isn’t the type to express his emotions or disappointments too much, but inside, it may have hurt him a bit. The way he’s responded tells you exactly what kind of player and leader he is.

James Tedesco is probably the best defensive fullback I’ve played with. It’s something that Trent Robinson has worked really hard on with him. Teddy controls our defensive line and the job he is doing is showing up in the stats; we’ve got the lowest ‘against’ in the comp.

He’s doing his thing in attack, too, having tweaked his game a bit after coming into a different style of team. A lot of his good plays for us have come in the middle of the field, running off our big boys, or off Jake Friend. Most fullbacks are out in the backline running behind blocks. Teddy and Cooper Cronk have worked really hard on their combination and it’s coming along nicely.

With Billy Slater finishing up this year and Teddy the fullback in a winning NSW team, you’ve got to put him right up there in the pecking order for No.1s in the NRL, if not at the top. Hopefully, barring injuries, he can win an Australian jersey at the end of the year.

There was plenty of outside noise with Cooper and Teddy coming in to our team. Plenty of expectation. But we just didn’t think about it like that; expectations are there every season at the Roosters.

Sure, it would have been nice if we’d clicked in the first month and we were putting big scores on and everyone was playing their best footy. But that wasn’t the case and we accepted it.

Cooper and Teddy probably copped a fair bit of the heat, but we all just had our heads down, looking to improve and grind out wins. We didn’t panic, took our time, worked our way through it. That approach made us better, without even realising it.

We’re playing some good footy now but we’re not where we want to be yet. There’s plenty more in us that we’re working hard to find.

James Tedesco and Cooper Cronk have worked really hard on their combination and it’s coming along nicely.

Cooper is the kind of player who is always trying to be better, always preparing the best he can to give the team the best possible chance to win. And you feed off that; you see him doing everything he possibly can, so you do the same.

Playing with Cooper Cronk has certainly lived up to expectations. He remains one of the best halfbacks in the comp, if not the best.

What he’s brought to the Roosters has been massive. We know inside the organisation just how much he influences us, on and off the field. He’s always there to help the boys out with their games, to talk footy with you.

He’s a good man. He’s pretty relaxed too, he can chill out. We’ve all heard that he’s a super-professional, intense dude, but he’s not over the top. He’s always having a laugh with us, but then he can just switch on.

He’s great every single training session. Consistent. He turns up every weekend, as he’s done for the past 10-15 years. He’s a great teammate.

@coopercronk_ kicked 485 metres against the Bunnies, his second best for the season! #EastsToWin

And he’s a complete player. If I had to name one outstanding aspect, perhaps his kicking game. He’s taking 80 per cent of our kicks in play this season.

He’s also organising the team and keeping us calm; after tries, he’s always speaking with Boyd and Jake. Leadership is one of his big attributes. And his ball-playing opens space up for everyone around him.

We had to feel our way through our combination at the start of the season, but the big thing playing alongside Cooper is that I can just worry about my own game. I can put total focus on my job and what I want to get out of a game.

I know his game now, know what he’s going to bring and every week without fail, it’s always of a high standard. I can do what I do off the back of Cooper, and also Friendy, controlling the footy game.

Our whole game, our entire season, is built around defence. That may have been part of the reason for the criticism earlier in the year; people not understanding that getting our defence right was our first priority. Perhaps people see that now.

We’ve found ourselves at the top of the comp, but it barely even feels like it. We’re still building as a team.

We’ve understood where we’ve sat all year; what our strengths and weaknesses are. We’ve ironed out the faults and kept the stuff we’ve been doing well. It’s an ongoing process. We’ll see where that takes us for the remainder of the regular season and then, the real stuff starts.

Several other teams have shown that they’ll be pushing to play in those big finals games.

Melbourne have been consistent, as they always are. Souths are a very good footy team, with their big pack of forwards and Damien Cook behind them.

People are writing St George Illawarra off but when we played them on ANZAC Day, they were a very good football side. If they get anywhere near that kind of form again, they’ll be hard to stop. And when a side like Penrith gets on a roll, winning can be a habit that you take into the finals; we saw it with the Cowboys last year, and Parramatta in 2009. It could take them all the way to the grand final if they find their best form.

At the start of the season, you always think you can win it. You’d better believe that, or you’ve already lost.

You just break your season into little chunks, get through them one by one. We’re in the last chunk now and when that’s finished off, we’ll see where we’re at. Finals footy is a whole new game.