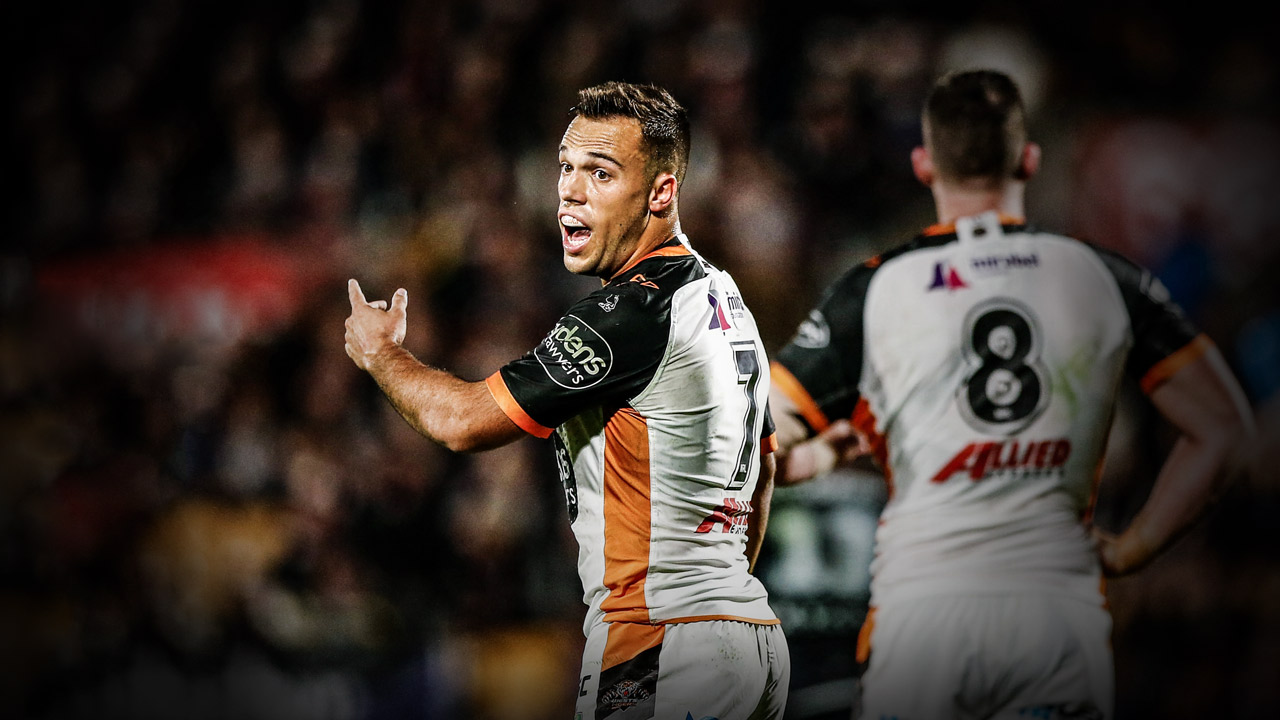 How we confused the experts

How we confused the experts

It was June. We were training at Campbelltown Sports Ground during the bye round.

Robbie Farah walked over and took me aside.

‘You’ve been playing well all season, mate,’ he said. ‘This is your team … I am here to help.’

They were the words I needed to hear.

Robbie had just been released by Souths to return to the Tigers and when I heard he was coming back, it felt a little weird.

He’s a legend of the club and was joining another, Benji Marshall, to return this year.

We’re only a few weeks in with both of them on board, but it’s been really positive so far.

If someone had said at the start of the year we’d have Benji, Robbie and Moses Mbye in our team, no one would have believed it.

So many things have had to fall into place for them all to be here.

Unlike many mid-season moves, though, it hasn’t taken much time for the combinations to click … I guess it helps Benji and Robbie have played 200-odd games together!

‘You’ve been playing well all season mate,’ Robbie said. ‘This is your team… I am here to help.’

Benji has been outstanding. He is so enthusiastic which has been there for everyone to see. I was a huge fan of Benji as a kid.

I was 11 years old at ANZ Stadium for the 2005 grand final along with mum and my younger brother, Scott. Dad and my older brother Joel were sitting in another part of the ground as we couldn’t get five seats together.

Being a young halfback, Scott Prince and Benji were my favourites.

When Benji fired that famous flick pass to send Patty Richards flying over, I was really excited. Attempting a pass like that in a grand final showed the confidence he had back then. He still has it today. When we played the Doggies earlier this year, he fired a magic cut-out pass for Corey Thompson to score. I just stood there in awe. It’s a privilege to play alongside him.

Benji has an aura, a presence that rubs off on everyone at the club.

He is always upbeat, even when it’s pre-season and the mid-summer heat is getting to you. He always has a quick joke or a friendly word when things are tough. Even after a loss. He’ll be the person who comes up to you and says, ‘It’s not the end of the world, we’ll get it right in the next game’.

Robbie’s return has been terrific as well. He’s been really strong out of dummy half and looks as though he could play on for another couple of years.

Moses Mbye at fullback has also been a huge addition. He is super quick and can change the direction of a game with a moment of magic. He’s also a shrewd thinker. At one of the first team meetings he attended, we were going over the game plan. Moses piped up with his opinion on part of the plan.

I can’t go into much more detail than that but what I can say is that his input made a lot of sense. I could tell straightaway he was going to be an asset for the team.

"Although they haven't been winning, the Dogs have been playing good footy and always in the game so we know it's going to be a tough one."

Luke Brooks gives his thoughts ahead of #NRLBulldogsTigers this Friday!

The other player who I think deserves a lot of credit in our side is Chris Lawrence.

He made his first-grade debut with the Tigers the season after that grand final win and I think he is having one of his best years in 2018. It’s inspiring.

Chris has helped me a lot throughout my career. The work he gets through is amazing, but he doesn’t get the wraps for the lines he runs and the dirty carries he takes.

He usually defends on the left side where I am and is always there when the opposition aim their big units at me. Everything he does makes my decisions a bit easier.

Chris is out for a couple of weeks with injury and we’ve missed him. We’re a much better team with him on the field.

WHY good halfbacks are hard to find

Not long after Mitch Moses left last season, Ivan told me he wanted me to run the team.

He didn’t just want me operating on the left side, he wanted me on the ball pretty much as first receiver, all the time.

I was excited about the challenge and think I have grown as a player since then.

This season I’ve been trying to take the line on a bit more when the game is on the line, pop up in places where I’m not expected and probe away with different kicks. I’m also talking more, which is important as the halfback.

The increased responsibility has been a factor, but I think most of my development has come with experience – a couple of weeks ago I played my 100th NRL game – and I’ve learnt so much over the course of those games.

It’s interesting: someone asked me recently why first-grade halfbacks seem to be getting more and more difficult to find. There are probably a number of reasons why but, in my opinion, one of the big ones is because junior footy has become a bit too structured.

Coaches see how first-grade teams operate and try to apply the same types of structures to kids who are just starting out and learning the game. That may win games, but it makes it more difficult for those kids to develop individually as players.

Coaches see how first-grade teams operate and try to apply the same types of structures to kids who are just starting out… it makes it more difficult for those kids to develop individually as players.

When I was young, I was lucky in that my coaches taught me to play what I saw.

They encouraged me to back myself, try things and if it didn’t go right, learn from it and keep practicing. If the play was right but the execution was off, they always said don’t be afraid to try it again next time you get an opportunity.

When you are young, you shouldn’t be worried about making a mistake by trying stuff on the field – if we encourage kids to try to create something that will give their team an edge, a winning play, they’re going to be better for it.

We’ve had an interesting year so far and have taken pride in confusing the experts.

Conceding just a couple of tries in our first two games, and winning five of the first six games of the season, made everyone take notice of the new steel in the team.

Ivan wanted us to establish our own identity.

In the past, the Tigers have been known for attacking footy but from the start of 2018, we began winning games with our defence. Consistency has been an issue through the middle part of the season, but overall I think we’re a different footy side than we have been in years past.

We beat the Dragons a couple of weeks ago but, without a doubt, last week’s win against Souths was our best game of the season.

The Bunnies were coming off nine wins in a row, so to hold them to just one try was very encouraging. We beat them with our defence and then scored some nice tries for good measure.

Heading into Round 20, we are two wins out of the eight.

I know what the team is capable of and am confident we can surprise more people before the year is out. Importantly, that belief is running through the team, but at the same time everyone is aware there are some tough games coming up.

There’s a real buzz around the place at the moment.

I know what the team is capable of and am confident we can surprise more people before the year is out.

Two members of the 2005 grand final winning team are back and we now have many points of attack, which will be crucial.

Ivan wants me to direct play on both sides of the ruck and I’m getting a lot of help from Robbie, Benji and Moses. With different attacking and kicking options, opposing teams don’t know which way we’re going to go, which is great.

Hopefully, we can make a serious run at the finals.

Given this is my first AthletesVoice column, I wanted to make special mention of my parents, Jeff and Michele. Without them, I wouldn’t be playing footy at all.

I often think back at all of the training sessions and games they took me to as a kid.

Dad had a bit of a soccer background – he was a pretty handy player for Gladesville – but it was my Mum who actually got me into rugby league. She took me and my brother to Leichhardt for some Tigers games and that’s when I fell in love with the game.

As a kid, I played soccer for Holy Cross College on Saturdays, and league on Sundays. League won me over though and I began making some junior rep teams before being selected for the Australian Schoolboys in 2012.

It was a pretty handy side and we played England, putting more than 50 on them in consecutive games.

We had the time of our lives in that series and I guess were all dreaming of playing in the NRL. How great would it be to play first-grade rugby league for a living?

I can answer that now. It feels awesome.