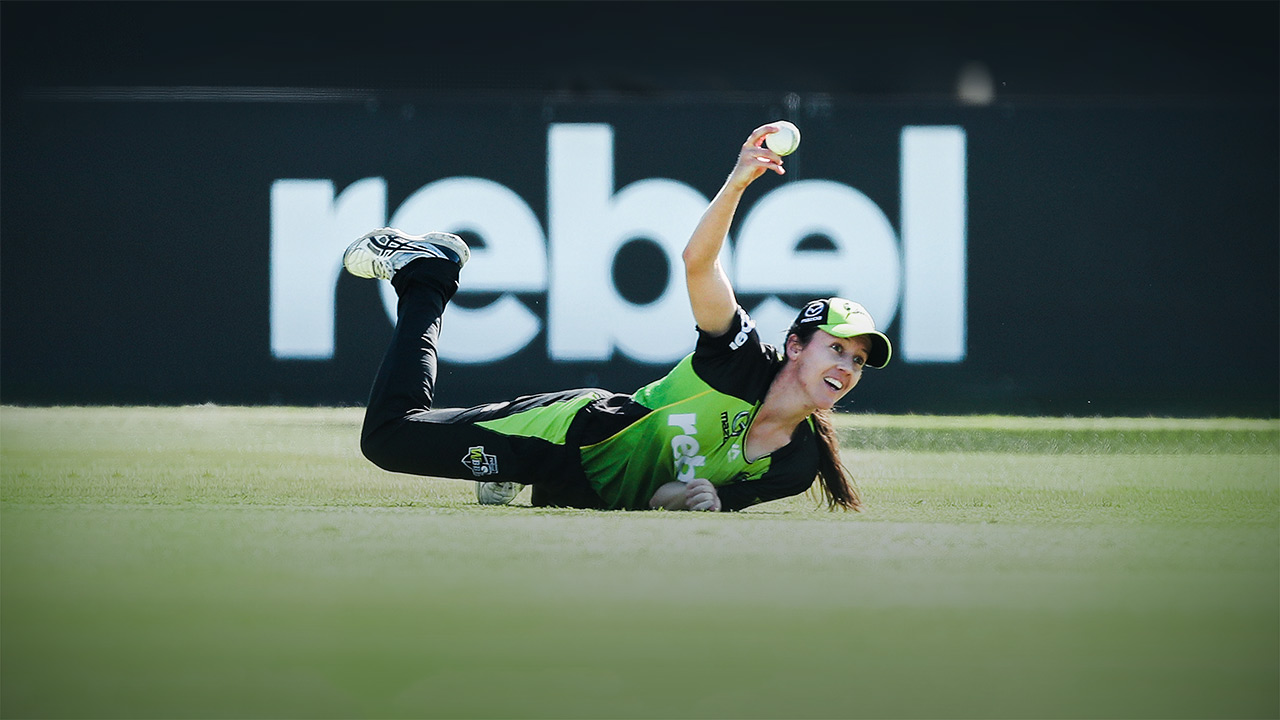 Life as a Jillaroo could be pretty scary. Some days you’d put 1,500, maybe 2,000 cattle through the yards. These cattle were angry. They had rarely had human interaction and really didn’t want to be in there. It was so daunting.

You’d get up in the morning and think, ‘I don’t know if I can do this.’

But you had your mates around you and it was a little bit like sport, where you’re there for one another and you back your mates up and get the job done.

When I was 16, my mother unfortunately lost her battle with cancer. After she passed away, my dad did a lot of coaching with me. My life was pretty heavily sport-oriented, so when I came down to Sydney to play cricket, it was all about how much I wanted it and how much I put in.

I was trying to work two jobs and study and play cricket for my state but I guess I didn’t prioritise things very well and I wound up with depression. I didn’t know it was depression at the time. I guess when a lot of stresses were placed on me, it all came to the surface and things started to fall apart.

Walking away from cricket and jobs and things without much warning was not who I am. It was an intervention from family and friends that said, ‘You need to get some help, this isn’t you.’

I regret walking away from the game like I did. I don’t regret leaving the game, but I do regret the way I did it.

I have family on my mum’s side who live on a property near Forbes so I just decided that I had to go there and get away from cricket. Then I went north.

I worked as a Jillaroo for five years on big cattle stations in Queensland and the Northern Territory. Growing up in Bathurst, I had very little horse riding experience and pretty much had to learn from scratch.

I really liked that, to be honest. It was kind of like going from primary school to high school, if that makes sense. There was no expectation of me to be really good at it.

Some mornings we’d get up at 3am and we’d drive an hour or two to get to where we were mustering. At a station called Lake Nash, which I think was three million acres, you’d drive two hours and you’d still be on the same property.

At that time we had about 80,000 head of cattle on that station. These places are just massive and everyone kind of does their thing to get the job done. I look back now and go, ‘Wow, I did that. I actually went up there and did those things.’

It’s hard for me to comprehend now but it was some of the best stuff I’ve done in my life.

I worked really hard up there. We worked long hours and sometimes we’d work a month straight. I think I needed to do that. I needed to get away from sport and learn a little bit about me, and a little bit about other people and I made some great friends up there and people that I’ll be friends with for life.

There were some really tough days. When you’re putting 1,500 cows through a yard a day and working with green horses who don’t necessarily want you to ride them, it was daunting at times.

But I look back and think that was one of the best experiences of my life. I learned a lot up there. I learned how much I’ve got to give to something, and that there’s so much more to life than just being good at sport or just kind of succeeding in one facet of your life.

It was something that I really needed to learn, and I loved it.

I also learned just how small I am. I learned that I’m very small compared not only to Australia, but life itself. It put everything a little bit into perspective for me.

As for that horse who bucked me off five times, I decided to get back on and rode her for the rest of the day. Her name was ‘Faith’ and she ended up being one of my favourites, so I got the reward from persevering and biting the bullet and saying, ‘Come on, let’s do this.’

I guess that’s a little metaphor for getting back on the horse with cricket.

BACK ON THE HORSE

I was really scared to come back to cricket. Because I left without much warning or telling anyone, I was scared of how people would approach me, and that I wouldn’t be well received.

But it was the exact opposite. Everyone was just so proud that I’d made the step to get back and do it. It was a bit like that day with the horse.

I started coaching again when I was back in civilisation in Bathurst, which is something I always wanted to do. Then my old cricket club, which was the Oxford Centennial Bulls men’s cricket club in Bathurst said, ‘We’re short, would you mind coming and having a game?’

I remember my first game back with the men. After having six years off, I think I bowled maybe six or seven wides and I remember coming home to dad and I was so upset about it.

Why couldn’t I just come back and do it easy? He was like, ‘What did you expect, you’ve had six years off?’ but I remember thinking I could be so much better than that.

As for that horse who bucked me off five times, I decided to get back on and rode her for the rest of the day. Her name was ‘Faith’ and she ended up being one of my favourites, so I got the reward from persevering and biting the bullet and saying, ‘Come on, let’s do this.’

Fun is a big part of cricket, but it has always been a lot more than just fun to me. I can’t play cricket just for giggles. I always like to play it well and fair and tough.

So I was playing and also coaching the Western Zone girls cricket side, and we had a link with Penrith Cricket Club which is a women’s grade club, and a few of the girls that I knew back when I was 18 came out and saw me and said, ‘Would you like to have a run back on Sunday?’

I played men’s cricket on the Saturdays and then I would drive down to Sydney on the weekends to play with the Penrith girls. This was a year ago, and it’s pretty much how I got back into it.

When I was 18, unfortunately the money wasn’t in the game.

One of my jobs while I was playing cricket was pulling beers at ANZ Stadium. I loved the atmosphere and I never thought one day I’d be playing in front of big crowds like that myself. It never really crossed my mind. I know this sounds not very positive, but I never thought women’s cricket would hit the heights that it’s getting to.

It’s so awesome now to think we’ve got a few games at the SCG this year with the Thunder. At the opening game of the year at North Sydney Oval, we had about 4,000 people there.

I remember saying to someone I never thought I’d play cricket in front of more people than my friends and family. It’s crazy to think spectators were coming there because they love cricket and wanted to enjoy a day out.

It’s been a pretty amazing transition to see what women’s cricket has become now, and I think we’ve a lot to thank the Big Bash for. The WBBL has definitely made the game more exciting.

I’m 25 now, and a little bit taller and a little stronger than when I left the game. People have told me I bowl a bit quicker now too. I was definitely a kid that grew pretty late.

I wish someone had pulled me aside – well maybe dad did and I didn’t listen probably – and said, ‘You will grow so much and you probably won’t be hitting your straps until you’re 23 or 24.’

I remember saying to someone I never thought I’d play cricket in front of more people than my friends and family. It’s crazy to think spectators were coming there because they love cricket and wanted to enjoy a day out.

One big change in cricket is the emphasis on strength and conditioning and running. The things that we know now about how to get the best out of our bodies is amazing. I hope it’s just the tip of the iceberg for me and that this season has put me in good stead to get bigger and better and stronger for seasons to come.

I’ve been pretty lucky. I think all those years up there of sweating it out every day working cattle has made it less tough than it could have been.

I’d like to become more powerful and get a bit better as a batter especially in the T20 format, and also a little bit quicker as a bowler. But I think my main aim now is most importantly just to be a good team member around the group.

I know that sounds really clichéd, but I have been through a fair bit, and I’m probably a bit of a wise old owl now.

Whether it’s with the Thunder or the NSW Breakers, I’m just so stoked to be amongst it.