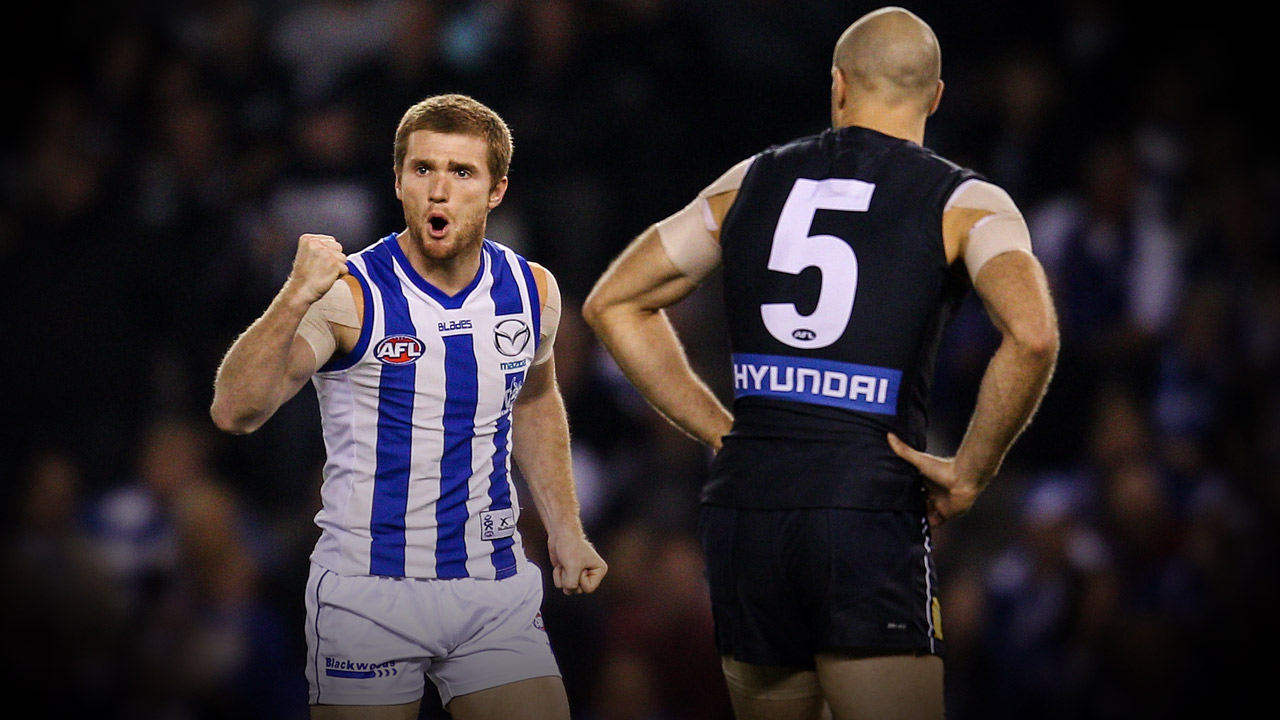 I can’t quite remember my first concussion but I think it was the middle of 2014.

I had another two that year, including a big one against Melbourne in Round 23. That really knocked me about. I had three months of non-contact training, returned in a VFL practice match the next year and copped another big knock. This time, I was out for 10 weeks.

I came back again. I was happy with how I was playing. Then, it happened. I was playing on one of my good mates – and former housemate – Levi Greenwood for the Kangaroos’ VFL team against Collingwood.

I was on the ground. He jumped over me to get the footy. He clipped the top of my head.

The doctor told me all these small knocks could do a lot of damage. His advice was to pull the pin while I could.

My wife Cass was pregnant at the time with Audrey, our first child, so it was a pretty easy decision to make for me and my family. I was 28 at the time.

I would’ve been happy to keep playing if the concussion affected me for two or three days and I was just nauseous or groggy. By then end of it, though, it was taking 10-to-12 weeks to get back to being able to train.

I’d have five concussions in 12 months. I was getting migraines. There was also memory loss. I couldn’t remember the names of people I’d see every day.

I also had really bad anger issues. That was the thing I didn’t realise at the time. I was in angry moods and taking it out on Cass and the people around me. And there was some pretty bad depression there for a bit.

The doctor said that playing on could mean having those symptoms for longer periods of time. I thought about being older and not remembering my kids’ names.

Retirement was the obvious decision.

Getting concussed was scary. Not so much for me at the time – I was in a haze and didn’t really know I was in such a bad way – but the reaction of family and friends to how I was carrying on was the most frightening bit. They voiced their concerns to me and that’s when I realised how serious it was.

I was really lucky to have great doctors at North and senior coach Brad Scott was fantastic. His message was to always put my health first and not even think about footy.

Three years later, I consider what happened to me to be a blessing, a real silver lining.

If not for those concussions, I wouldn’t be where I am today: coach of VFL club Coburg at the ripe old age of 30. Coaching has become a new dream for me to chase. I’ve got one flag under my belt and, with any luck, there’ll be more to come.

I’d had enough of the AFL system by the time I retired. Because I was out with concussion, I’d spent the second half of 2015 doing some development coaching at North. I really enjoyed that side of things. But I also wanted a change.

I knew of South Croydon Football Club and a few of their players. They’re a division 1 side in the Eastern Football League, the biggest metro league in Melbourne. They got in touch, I had an interview and got the gig.

South Croydon finished second last in 2015 and won four games the year before I arrived. The next year, at the halfway mark, we were 1-7 and really battling.

We’d lost some close games we could’ve won. I’d bought in a different game style, an AFL-style pressing zone defence, and wasn’t sure it’d fly in local footy. But the more we played, the better the guys got at it. We won four of our last six games, improving on the 2015 season by two wins.

There was a lot of optimism about 2017 and that helped us pick up some good recruits, including former Melbourne midfielder Matt Jones, who was a local guy.

We had a strong pre-season. We started our campaign on a good note, winning the first five in a row. We copped a couple of drubbings mid-year, a few nice little touch-ups from the top teams, then found some winning form going into finals. We secured a top-three finish and double chance.

If not for those concussions, I wouldn’t be where I am today: coach of VFL club Coburg at the ripe old age of 30.

South Croydon had never won a first division final so that was my goal in my first year. We played Balwyn, who’d won four of the past six flags, in the first final and steamrolled them in the last quarter.

Confidence is an unbelievable thing. If you could bottle and sell it, you’d make a fortune.

The boys had some real self-belief, but it didn’t last long. The next week we played in a semi-final to win through to the grannie and lost by 76 points to Vermont. We played them four times that year and three of those times we’d led at half time then got blown away.

Now we had to take the scenic route to the big dance.

We needed to beat Blackburn in the preliminary final. We’d beaten them twice during the season and they were banged up come the prelim. We beat them in an arm wrestle and got through to the decider.

Vermont were waiting for us in the grand final. It was a very windy day. Skill level was down a bit. We were a team that prided ourselves on our pressure. Six of our best players played out of their skin.

We held on by three goals. We’d won the club’s first-ever division 1 flag.

It was my best moment in footy.

To help South Croydon win a flag and see grown men crying was incredible. We trained and had dinner the Thursday night before the grand final. Four hundred people attended. To win it for them meant everything.

Coburg spoke to me during finals but I put that chat off to focus on South Croydon’s campaign.

We had some pretty big celebrations after the flag. On the Tuesday, I rolled in for my interview, with not much of a voice.

They must have been a bit worried at the time given the shabby state of the bloke in front of them!

Fortunately, they saw through that and by the next week, I had the job. I was contracted for another year at South, so I had to tell them, and then it was straight into planning for 2018 and starting all over again.

It was pretty daunting. I didn’t know where to start.

I put some coaches in place around me, recruited some blokes and got straight into pre-season and implementing the game plan.

Heading into last weekend, we were 0-12. It’s obviously been a tough year but the last few weeks, we’ve put some pleasing performances together.

We had some pretty big celebrations after the flag. On the Tuesday, I rolled in for my interview, with not much of a voice.

I used to listen to coaches in the AFL system and think they were talking shit when they’d say, ‘We’re not worried about wins and losses, we’re worried about the process’. I thought it was a cop-out.

I know what they mean now. There are positives there despite our record. Although we don’t accept losing, we have continued to improve.

We got our first points last Saturday but I’m shattered to write that it was two, not four.

Playing at home against Sandringham, who are affiliated with St Kilda, we’d played some good footy during the day but were 32 points down at three-quarter time. We won every 50-50 ball in the last quarter, came home with a wet sail and got the lead with about a minute to go.

Sandy went coast-to-coast and had a shot on goal from 45 metres out. The siren was gone and the player didn’t make the distance, so we all celebrated our first win.

But the umpire blew his whistle. He paid a 50m penalty. One of our young trainers, a 19-year-old kid, had gone to the aid of an injured player and ran through the mark. The Sandy player took his kick in the goal square and slotted it to draw the game.

I ran quickly down from the coaches’ box to speak to the umpire about what had happened because I didn’t know and I just couldn’t believe it. The boys were pretty shattered in the rooms afterwards, plenty of tears which shows how much it means to them, which is a good thing.

I was in the wilderness once I finished up playing.

As a kid, all I had wanted to do was play footy. I got to do that for nine years at North Melbourne over 104 games. When that all ended abruptly at the age of 28, I was at a bit of a loss.

I’m a plumber by trade but I didn’t want to do that forever. To chase this new coaching goal while spending as much time as possible with my family is great. We’ve had another daughter, Hazel, since Audrey.

As a young bloke, I thought being an AFL footballer would define me.

Today, I’d prefer to be defined as a good father and husband.

Coaching in the AFL is the new professional dream. It will be hard going to get there. Whether or not that becomes a reality, I’m not sure, but I do know that I definitely want to get back into the AFL system.

I believe I have plenty to give.