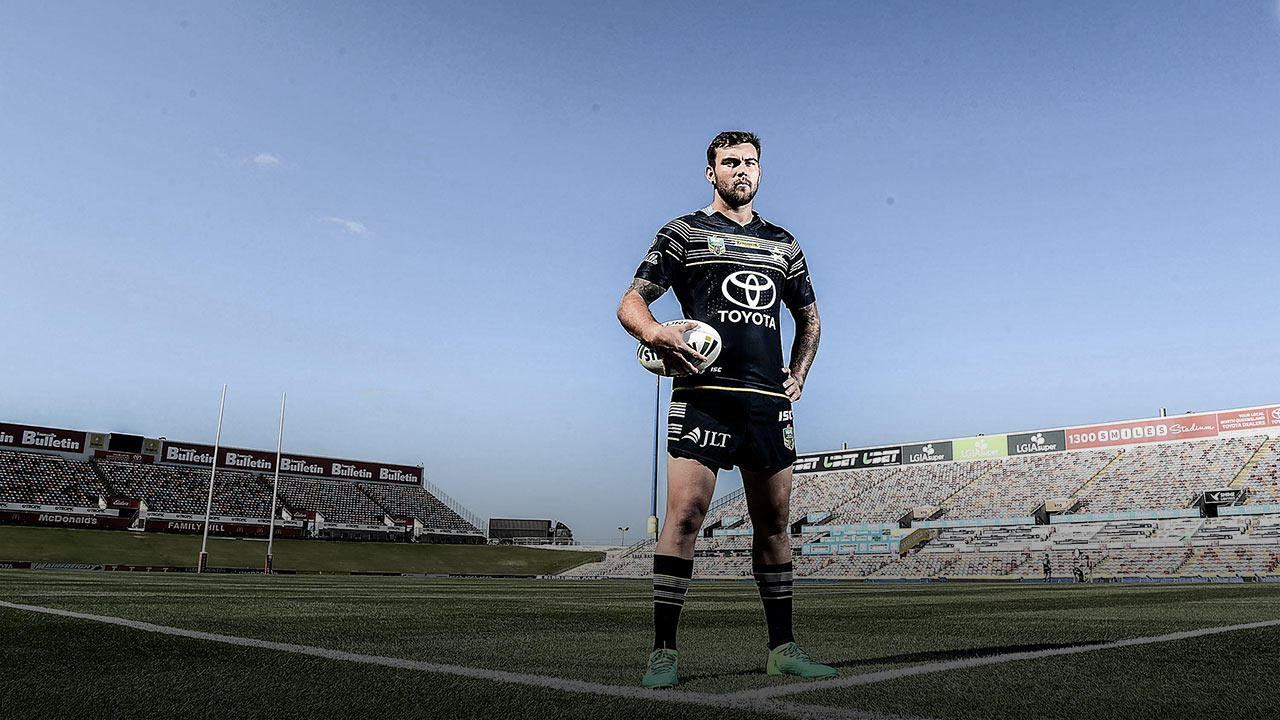 The miss that haunted me

The miss that haunted me

I’ve been lucky enough to play in a few Grand Finals now.

They’ve all changed my life one way or another.

The one I get asked the most about is 2015. The try with a second to go. Golden point. The Cowboys’ first premiership.

But they haven’t always been so positive.

I remember as a teenager when Jason Taumalolo moved to Townsville from New Zealand with his family. There was a pretty intense rivalry going on between his school, Kirwan State High, and mine, Ignatius Park College.

Jase was scarier to me then than he is now. I was only 14 and had a bit of growing to do. He was M.A.S.S.I.V.E. The sight of him running at you was the most daunting thing imaginable.

Kirwan High ended up beating Ignatius Park College in that Grand Final and Jase just killed us. He scored a couple of tries and left defenders sprawled all over the place. Pretty similar to what he does to teams now, when you think about it!

But, of all the Grand Finals I’ve played in, the 2011 Toyota Cup decider left the biggest impression on me for the longest time. It was about as far removed from the 2015 example as you can get.

We were playing against the Warriors. They were up 30-16 with ten minutes to go. We came back strongly and, with less than a minute remaining, Chris Grevsmuhl barged over to lock it up at 30-all. There were about 40,000 people in ANZ Stadium at that point. They were all on their feet.

I was the Cowboys’ goalkicker. As I knelt down to line my shot up, about 20 metres out and 15 metres in from touch, the fulltime siren sounded. This was it. Nail the kick, we win the premiership. Miss it, we’re cast into the lottery that is golden point.

I stepped back from the ball. There was a lot of emotion going through my head and my body. I couldn’t control it. I took a breath.

I knew it was missing from the moment I hit it.

It didn’t sound right off the boot. I had a big curve on my kicks back then and I knew the sound was different to what it should’ve been. It curved way too much and missed to the left. It was a feeling of instant regret.

The Warriors ended up winning in golden point. I was devastated.

I remember Andrew Johns coming up to me after fulltime and saying, ‘Kickers will always have that pressure, you just have to learn from it and move on.’

Then I remember walking into the sheds and sitting there for what felt like hours. I was just thinking, replaying the kick over and over in my head. I could’ve done it differently. If I’d hit it right we would’ve won. A couple of people came up to me and said, ‘Don’t worry, we’ll get another shot at a premiership.’

Coming home was probably the hardest. There was a big reception from the people of Townsville to congratulate us on a good season. As I walked through them, I felt like I had blown it for everyone.

It took a little while to get past that. Those kinds of setbacks probably don’t hit you as hard when you’re older and you have experience and perspective. But they hurt at the time.

In hindsight, that was a good learning experience from me – having to fight back from that feeling of letting people down. I reckon it ultimately made me a better player.

The experience of 2011 was very much in mind when I scored the equaliser in the last minute of the 2015 NRL Grand Final.

The story of that try has been told a lot through Johnathan Thurston’s and Michael Morgan’s eyes. I was further away than them so my version mightn’t be as good!

The ball was bobbing around and Johnno stopped, turned and started running our way. He offloaded to Morgo. Morgo ran across the field, slid in between Jack Reed and Anthony Milford and got Corey Oates interested as well.

All I did was hold out on the wing. Morgo got a brilliant one-handed flick pass away and I needed to make four steps to get to the tryline. It was 16-all with a kick to come.

I felt weight lift off my shoulders as soon as I put the ball down. I thought about 2011 and missing the kick to win it. Now I had scored the try to tie it up.

In hindsight, that was a good learning experience from me – having to fight back from that feeling of letting people down. I reckon it ultimately made me a better player.

Johnno’s conversion attempt hit the post and bounced back into the field of play. I thought to myself, ‘Not again. I can’t lose two Grand Finals like this.’ It was the first NRL Grand Final to be decided in golden point.

When you go into the 80th minute of any game, you’re absolutely gassed. You’ve got bugger all left in the tank because you’ve put it all out there. You’re looking at another five minutes each way and your body just isn’t used to it.

The feeling of exhaustion hits you at fulltime. Then the adrenaline kicks in again once overtime starts.

When you win, you don’t feel tired. You feel like you could go another 80 minutes. If you lose, you slump and feel physically and mentally exhausted. You don’t feel like you can even walk. I’ve had a Grand Final win and had a loss in golden point and I know which one I’d prefer!

At the coin toss after fulltime in 2015, Johnno decided to kick-off. That’s a pretty rare thing to do in golden point. But that was his call and, as you all know, he nailed the field goal to give us our first premiership. It was incredible, one of the best feelings I’ve ever experienced.

BORN TO BE A COWBOY

It’s quite special representing the Cowboys when you’ve grown up in Townsville.

I was about three-years-old when the Cowboys entered the NRL. I’ve heard my family talk about how good it was having a professional team in the city, but I can’t remember Townsville without them.

My old man, Shane, wasn’t a big footy fan but he loved his motorsports. My Mum, Sandra, tells the story about the time when I was a little kid asking her to let me play footy for the first time. She said she was OK with it because she didn’t think I’d stick with it because of all the big hits!

But I loved it. I was one of those kids running around in the schoolyard pretending to be all the Cowboys players. Josh Hannay came to visit us at Aitkenvale State School as part of the Cowboys’ adopt-a-school program. It was the best thing ever.

Jason Taumalolo was scarier to me then than he is now. I was only 14 and had a bit of growing to do. He was M.A.S.S.I.V.E. The sight of him running at you was the most daunting thing imaginable.

Ray Thompson, Michael Morgan are all from up here. Corey Jensen is from Bowen, but he played in the Townsville local comp.

Morgo and I came through at a similar time. He’s a year older than me. We used to play against each other – Morgo for Townsville Brothers and me with North Thuringowa Devils.

There’s a real bond between the community and the team. When we got back from the airport after the Roosters game, I had a shower and went to Wara Sushi for a feed with my partner, Deanna. We were waiting for our table when a lady came up, asked if I could hold her baby and take a photo.

That doesn’t happen too often!

FEET FLYING UP IN THE AIR

It was good to get over the line against the Roosters with not a lot of space to work in.

A few people have asked me over the last few years about those big finishes in the corner when your legs are in the air and over the touchline but your ball-carrying arm is inside the field of play.

I can’t speak for other players, but I don’t lay out a bunch of mattresses and start throwing myself around the corner post at training. I’d probably end up with an injury!

Taking the corner post out of play has probably been the best rule the NRL has brought in over the last couple of years. As a winger, knowing that you don’t have to worry about your body hitting the corner post gives you that extra bit of room to move.

It’s not something you pick up in training. It’s just a spur of the moment thing.

This finals series hasn’t felt as pressurised as some of the others. We weren’t even in the eight coming into Round 26. We were relying on the Bulldogs-Dragons results going our way and we just ran with it.

All we have spoken about is that we have three wins to get to a Grand Final and one more to lift the trophy. People wrote us off before we even made it into the finals. We’ve showed everyone we have the ability.

Morgo has stepped up into Thurston’s role and taken on more responsibility. He’s doing a bloody good job. He’s taken a lot of pressure off Te Maire and he’s feeding off him, as is Cootey out the back. At the other end of the scale with Thumper out, the likes of Scotty Bolton and Jason Taumalolo have taken their games to another level.

The Storm are the best team in the comp and have been all year. They’ve got a good gameplan and they stick it to it. They complete really well, put you in the corners and bash you up. They don’t go too far outside of their gameplan and that makes them hard to beat.

It should be a great game. I just hope, for the sake of my ticker, it doesn’t go to golden point again!