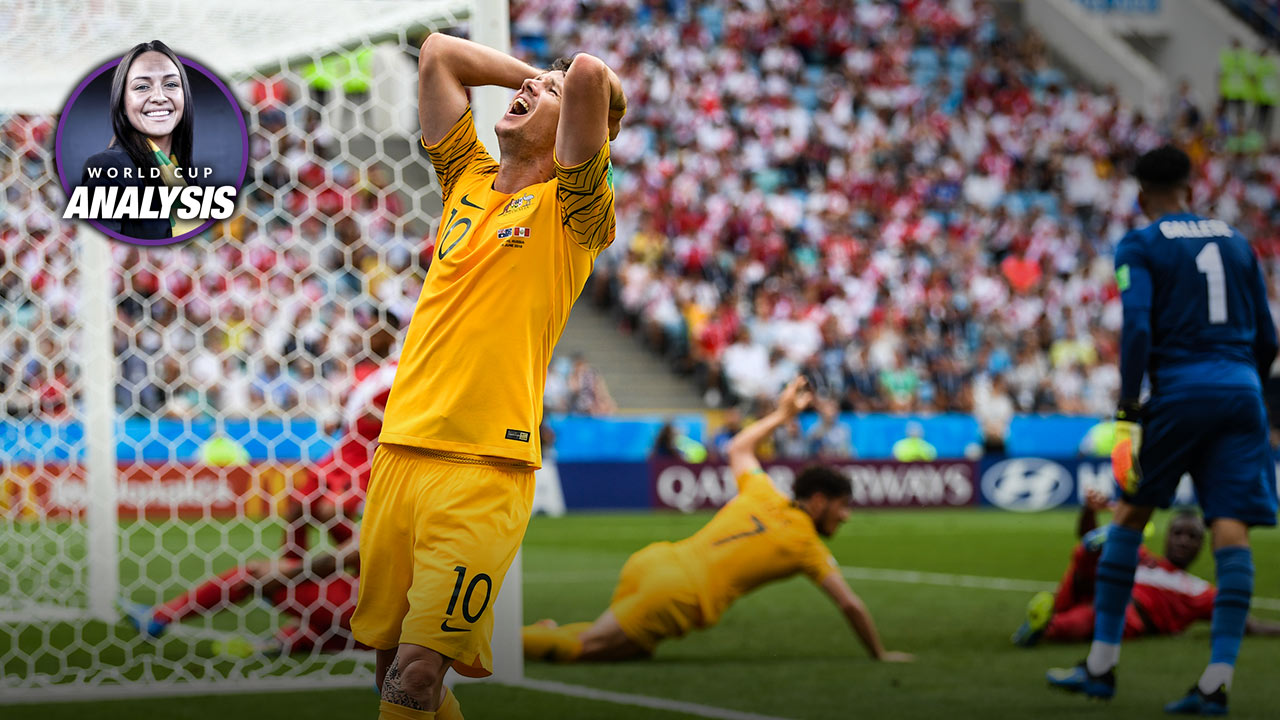 So much promise, so little to show for it.

The standings will show that the Socceroos exited the 2018 World Cup with just one draw from three pool games, but that doesn’t really tell the story of their tournament.

No one would’ve begrudged them if they took a point against France. They went within a whisker of taking all three against Denmark. And they threatened Peru, the world’s 11th ranked team, repeatedly throughout the first half in particular.

The common thread in all three games, however, was Australia’s lack of composure and a clinical finish in the final third. Never was that more painfully the case than against Peru.

Tomi Juric did well filling the spot of Andrew Nabbout. He’s a strong, target-forward compared to Nabbout and that gave us a different dimension when we got the ball to his feet or chest.

But, again, it was the lack of cohesion between the man up front and the players linking in with him that cost the Socceroos. The chemistry in the front third and the cutting edge was missing, as it was in the opening two games.

I liked Bert van Marwijk’s move to bring on Tim Cahill and Daniel Arzani in the second half.

Arzani gives us something different. He has that confidence, backs himself and isn’t afraid to take shots, which we’ve been lacking. He poses a threat and is a real player for the future.

The confidence of youth.

Daniel Arzani blazes one over the top.

Tim still had that presence about him. From the moment he came on, he worried the Peruvian defenders and you felt like he might’ve been the one to get us out of the hole.

The chemistry in the front third and the cutting edge was missing, as it was in the opening two games.

Mathew Leckie again was dangerous getting up and down the flanks. He’s got pace to burn. He looks good when he links up with Aaron Mooy or Tom Rogic coming through and getting crosses in, but I would like to see him be even more effective in that regard – to whip in a ball to get the central striker and pose a threat.

There hasn’t been an end-product that has come from the effectiveness of Australia’s wingers at this tournament.

Can he save the @Socceroos?

Robbie Kruse has copped a lot of flack recently. That’s never easy, particularly on the biggest stage in world sport. I give him credit for the way he responded. As a sportsperson, you have enough negative thoughts already in your head without dealing with that.

As a winger, though, you can’t afford to be caught offside when your team is threatening and that happened to Robbie once or twice in that first half.

Rogic was our best player again. When we have the guts to play through the lines and find his feet, he can get out of tight spaces and can slip balls in for the strikers. He had some beautiful touches against Peru.

Peru scored with their one and only shot of the half …

Socceroos have looked the more threatening and dangerous going forward.

He was our outlet a lot of the time. Throughout the whole tournament he’s been our engine room, along with Mooy. For us to have any chance to get results, they have to be at the top of their game.

Fortunately, they’re both young enough and will have the opportunity to play together in the national team for years to come.

Mile Jedinak does the simple things well, but I wonder going forward whether we need someone a little more dynamic in that role to link up with the other two.

Trent Sainsbury was solid again. He’s someone who has shown he can be relied upon in the build-up play. It’s no wonder that he’s caught the eye of some big clubs during this tournament.

Our fullbacks had good energy getting forward, but it’s that cutting edge – that end product – that we’re lacking. For both of Peru’s goals we had players back. For the first goal we had six players to their two, but they were still able to get it past us.

Players, not space, score goals so you have to be more touch tight in those areas.

It’s life or death in the box.

It looked like Maty Ryan lost sight of the ball because he had two players in front of him for Peru’s first goal. It didn’t look like he could’ve done much about it.

In the end, Peru had two clear-cut chances for the whole match and they capitalised on both. We couldn’t do the same at the other end. When you play an opposition that has that composure and execution in the final third you get punished – no matter how good Maty is in goal.

Australia have it all to do.

In the end, it wouldn’t have mattered. France and Denmark played out a 0-0 draw, meaning both progressed from the group stage.

Australia finished bottom of the group. It felt like they played better than that.