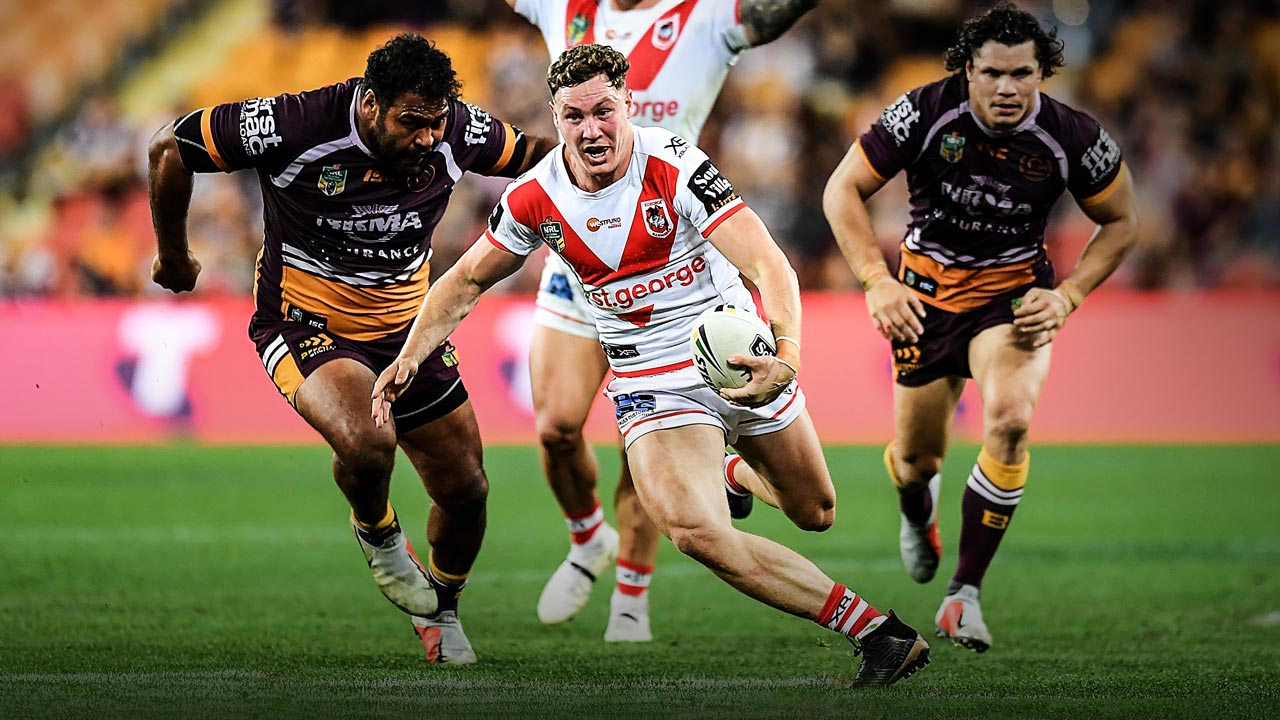 The untold tale of Ben Hunt & I

The untold tale of Ben Hunt & I

Ben Hunt and I have been described a few different ways ahead of Saturday’s semi-final against the Rabbitohs, which is shaping as one of the biggest games of my life.

But they forget to mention one key point.

Benny and I go back a long way. All the way to high school, in fact.

We both attended St Brendan’s College in Yeppoon. He was a couple of years older than me – and the star halfback in our first XIII – but I remember those days well.

Our first meetings weren’t exactly cordial. St Brendan’s was an all-boys boarding school and the seniors used to pick on us young boys a bit, give us a bit of a razzing. I was a new boy in Year 8 and Ben was in Year 11.

I used to give a bit of cheek then. I could be a bit of a smartarse as a kid, always in some kind of strife, getting into scuffles, stuff like that. One of the reasons my parents sent me to boarding school was to get a bit of discipline and maturity.

My mates and I were all in the under-13s and Ben and his mates were in the Firsts, but we used to yell stuff out to them in the playground and then bolt away. They would chase us all over the school and if you ever got caught, you’d cop a bit of a hiding.

Looking back, it was a bit of fun, although I’m not sure I saw it that way at the time! I’m a lot bigger than Ben now and every so often, I remind him of those days. It’s always good for a laugh.

Despite going to the same school, we never actually played together because of our age gap, but I used to watch him every weekend against other schools and remember how good he was. Playing at halfback, he was easily a few levels above the other kids. You could tell he was going to make it.

I must say, it was brilliant watching Ben respond to his critics against the Broncos last weekend. He had a fantastic game against his old club and in front of a huge pro-Brisbane crowd.

I thought when Gareth Widdop came off with his shoulder injury Ben really stood up and took control of the game with his organisation and field kicking. A lot of people were talking about him in the days leading up to it, but he remained really calm for the full 80 minutes and played great. It was exactly what we needed.

If he can maintain that form, there’s no doubt the Dragons can go a long way in the weeks ahead.

Hardly anyone gave us a chance of beating the Broncs. We knew what was needed and played accordingly. It came as a big confidence booster. I have no doubt we can do it again against the Rabbitohs.

The loss of Gaz is tough. Losing your captain, playmaker and goalkicker always is. But I’m proud to be wearing the No.6 this weekend in place of him and I’m comfortable in the position. It’s my favourite. You get your hands on the ball a lot more in the halves, but I also enjoy guiding the boys around and incorporating different parts of my footy into the game.

Benny and I had three games together when Gareth hurt his shoulder the first time this season. There were some ups and downs but overall, I think we went OK.

But now it’s huge. Do or die time. I really believe we can get the job done.

It’s always a big challenge playing in the halves and taking control of the team. With Benny alongside, I think we can keep the roll going that we started in Brisbane.

THE LIFE OF A UTILITY

This season has been a lot of chopping and changing for me, but when you’re a utility player, you have to expect that. I’ve played in the centres, at lock and in the halves this year. I’ve even had a shot at front-row. It was against the Titans when we played up in Toowoomba.

I played about 20 minutes as a prop and I remember some crowd members ribbing me about my body size as I took the ball up from a kick-off. I’m hardly front-row proportions at 84 kilos wringing wet, but somehow I got through it.

At times, it can be frustrating playing a utility role. You don’t really know what you’ll be doing week-to-week, or where you’ll be playing. Having the ability to perform in different positions allows me to play every week, but it can also be a difficult to build game-on-game if my role changes.

I look at it as a positive, though. I’ve played pretty much everywhere on the field now and feel comfortable in most positions (prop excluded!). Not everyone can do that. Most importantly, it helps the Dragons.

At times, it can be frustrating playing a utility role. You don’t really know what you’ll be doing week-to-week, or where you’ll be playing.

Saturday’s game promises to be a cracker. There’s lots of history between the South Sydney and St George Illawarra clubs. I’m pretty sure it’s going to be intense, maybe even heated. I’ll be marking Cody Walker, a very slippery and dangerous player. He has had a terrific year.

We were both in the system together at Melbourne in 2014 and were supposed to make our first-grade debuts together for the Storm against Manly at our home ground. Cody, unfortunately, pulled a hammy in the Captain’s Run and didn’t make it that day.

I had a night to remember – definitely one for the scrapbook. I got on the end of a pin-point Cooper Cronk cross-kick to score the winning try. Storm 22, Manly 19. I was feeling 10-feet tall!

Cody made his debut for Storm a short time later and has since found a permanent home at Souths. I’ve sort of kept in touch with him since those early days but time doesn’t really allow anything regular.

Cody came to Melbourne from the Brisbane Easts Tigers. The Storm gave him an NRL pre-season to see what he could do, and he worked really hard all summer. By the end of it, he had impressed lots of people with his competitiveness especially, which has stood him in good stead.

He has been rewarded since those days. It’s nice to see his career kicking on at Souths.

I come from an outback Queensland country town, Winton, which is famous for Australia’s most iconic song, Waltzing Matilda.

Winton natives are proud that Banjo Patterson wrote the song there in 1895 while staying at a local sheep and cattle station. Waltzing Matilda was first performed at the North Gregory Hotel. There’s a terrific museum in town today carrying the song’s name.

As a schoolboy, my family lived at Longreach, about 180 kilometres away, and one day we had a visitor that changed my world. His name was Billy Slater. He turned up to put on a clinic for the Longreach Primary rugby league kids.

I was the under-11s captain and it was my job to show him around the school. He was my idol and to meet him and spend one-on-one time with him was amazing.

Ten or so years later, I reminded Billy of that day when I arrived to play in Melbourne. ‘Geez, you make me feel old!’ he said. But Billy made a lasting impression on me as a kid and to actually play my first senior game for the Storm with him back at No.1 … words can’t properly describe my feelings.

As a schoolboy, my family lived at Longreach, about 180 kilometres away, and one day we had a visitor that changed my world. His name was Billy Slater.

I got to the Storm in a roundabout way. After making the Queensland Schoolboys under-15s team, I received a good offer to join the Knights. There was a little bit of interest from the Broncos, nothing really from the Cowboys, but people close to me said the chance at Newcastle was too good to pass up. I signed.

I enjoyed my time there and had a couple of seasons in the Knights NYC team before another opportunity arose with the Storm. I grabbed that chance with both hands – the chance to play with so many of my Queensland heroes, Billy included, was too good to refuse.

Again, I served my apprenticeship in the NYC, but before my first-grade debut, I was sitting in the dressing room getting ready. I remember looking around and seeing so many fantastic players going through their pre-game routines. I’ll admit it was quite a battle getting my head around it.

Coach Craig Bellamy was very good to me. Physically, I wasn’t a very big unit when I got down there – on the slight side at 81kg – but he gave me heaps of confidence. He showed a lot of faith in me and told me I’d have a good future if I kept my head down and worked hard.

I really liked Bellyache. He was a guy who never sugar-coated anything, if you know what I mean.

Another opportunity arose at St George Illawarra and I made the move here in 2016. It’s a wonderful club, with so much tradition and history. Hopefully we will be able to create some more in the coming weeks.

Mary McGregor, our coach, has really stood up this year. The Dragons started the season well and racked up plenty of wins in a row. We lost a few games after the Origin series but our early record was good and held us up to be where we are right now.

Mary has been the subject off lots of rumours: Will he hold onto his job? Will Wayne Bennett leave Brisbane and come back? None of us pay any attention to the rumours, the newspaper gossip stuff. He is our coach and we all support him 100 per cent. He has shown a lot of faith in me and all I can do is try to repay him with good performances every time I put on my boots.

We’ll probably be written off again when we meet Souths. But we’ve got the team, the coach, the momentum – and we’ve got nothing to lose.

If we run out with the right mentality, we can get the job done for sure.