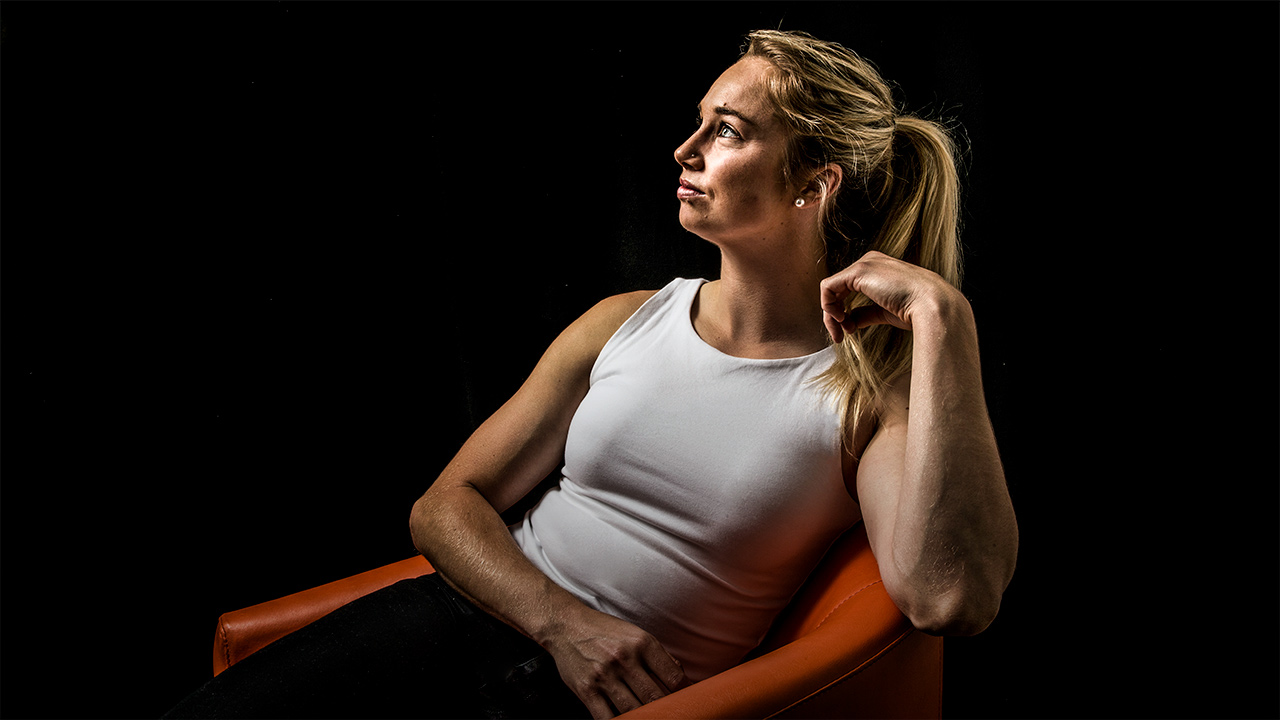 I remember my first training session with the Bega Roosters. I was a lanky kid, wearing a ponytail and a pair of joggers, and I hadn’t really watched much footy on TV.

It was a little scary to start with. I didn’t know what to do in a team situation.

I was the only girl there.

For the first year or so, the boys were a little bit standoff-ish but things changed when I kept scoring tries and tackling them hard. I was used to the body contact from my mini games on our dairy farm in Bega with my older brothers, Deon and Ryan.

Deon was four years older than me, and Ryan two. They were already playing footy for the local club and it seemed only natural that I joined in their backyard game. It was always Dad and myself versus the boys. For some reason, Dad always threw dummies and we just kept falling for them.

It started out as ‘grab’ football but as I grew a bit older the tackling and running became much more physical. I started practising my tackling on my brothers. My Mum stayed inside – she didn’t want to see her little girl getting bashed up by the guys.

But back to the Roosters. Generally, I have a really bad memory, but I do recall one day playing a game against the boys down in Eden. I had scored two tries running past the fullback. He missed me cold each time.

Then I got my hat-trick doing it all again.

I remember him calling me a ‘bitch’ as I walked back to my position.

THE LONG SEARCH FOR LEAGUE

Dad was giving me $2 for each try I scored. Two bucks was heaps back then. That was my encouragement, my incentive. It was never about beating the boys.

In my first year, I was the top try scorer and top tackler and the boys in the team treated me pretty well. I knew then and there that rugby league was definitely the sport for me, but it all had to stop the day I turned 11.

Those were the rules. Girls had to stop playing junior league. You just had to accept the outcome. Grin and bear it.

I had done little athletics and played basketball when I was younger but when we moved into high school most of my friends were playing hockey, so I joined in with them. I wasn’t of rep level standard, but I wasn’t horrible either. I had a long reach and a pretty powerful hit. And I liked defending.

Hockey was good at the time but, later on, I started playing league tag and pretty much fell back in love with rugby league. I wanted to follow my passion, like my brothers did, and see if I could make a go of it in league.

I started practising my tackling on my brothers. My Mum stayed inside – she didn’t want to see her little girl getting bashed up by the guys.

Deon was a second-rower who played more than 50 games for Norths in the NSW Cup. He also played two NRL games for Souths. Ryan was a good player, too, and also had a crack at playing in Sydney.

Everything for me ultimately changed for the better – and all very suddenly. I was at home and saw a TV news bulletin about the Australian Jillaroos. It was July, 2013, and the Jillaroos had just won the World Cup, defeating New Zealand in the decider at Leeds.

I saw some footage of the girls playing and was so excited. I had no idea there was any such thing as rugby league for women available. I immediately jumped on my computer and tried looking for a club to play for.

My search lasted for months without success.  There was hardly any information. I ran into so many dead-ends. Finally, I found a club to play for – the Helensburgh Tigers, just north of Wollongong.

The Bega-to-Helensburgh run is about five hours each way. We did that pretty much every week for three years! Sometimes it was more than once-a-week if there was rep training.

Don’t ask how much we spent on petrol. That’s way too scary to say out loud.

But it was worth it. I won the Illawarra Player of the Year award, then made the NSW State of Origin team and was the Blues Player of the Year. And then came the huge thrill of winning selection with the Jillaroos!

In the midst of all the excitement, I was staggered to win the 2016 Dally M Medal. I was happy just to be at the presentation night! When they read out my name I was blown away, totally shocked.

I was certain my great friend Samantha Bremner would win it.

I saw the award as a form of recognition for many people who helped me along the way. Mum, Dad and my partner, Craig, have done so much. Mum, especially, has driven me for hundreds of hours and literally thousands of kilometres to club and rep training as well as games.

And then there were my coaches and friends – all so very supportive.

As soon as you walk into my house, I’ve got that Dally M medal sitting there taking pride of place on the mantelpiece. It’s pretty special.

People have described all of the car travel to and from Bega as a sacrifice but I don’t see it that way. It was more of an investment. If I didn’t do 120,000km in my trusty old Toyota Corolla, I wouldn’t be where I am today.

It hasn’t all been rosy. Before this year, the worst injury I’d ever had was a corked thigh. But at the start of the season I broke my leg playing in the Auckland Nines. I was gutted.

I had these big plans for the whole of 2017. I was all fired up for the Nines, the All Stars game, the Anzac Test, the Origin and the World Cup at the end of the year. I suddenly had to reassess all of my goals. I found it all very hard.

I had a job as a personal fitness trainer with United Fitness at Bega. I loved seeing our clients every day and helping them with their goals. I’d also get the chance to work out myself almost every day. And then nothing.

I found myself sitting on the couch with this busted leg. My family and Craig were a huge help for me and my boss was simply amazing.

All the while, I kept thinking about Jason, my cousin.

Last year, Jason had a terrible snow-boarding accident in Canada and became a quadriplegic.

I began to realise my injury was only temporary. That I’m going to heal, I’m going to run and play footy again. ‘Suck it up girl, you’ll be fine.’

Jason has been a big inspiration to me. He had the accident before we played State of Origin and it definitely spurred me on. He might be coming to see the Jillaroos play in the World Cup. I’m pretty excited about that.

‘THE PRETTIEST TEAM GOING AROUND’

I worked hard, made it back in time for Origin and went OK. Now I’m aiming to play well at the World Cup.

The broken leg and those four long months on the sideline made me appreciate my health and what injuries can do to an athlete mentally. To be able to run around on the footy field with your best mates having all of that fun in a sport you absolutely love – can it get any better?

I began to realise my injury was only temporary. That I’m going to heal, I’m going to run and play footy again. ‘Suck it up girl, you’ll be fine.’

I love being in camp with the girls. Rugby league gives you the chance to meet new people and share your common interest. The culture we have in camp is phenomenal.

There is an age-old stigma about women’s rugby league but it is changing rapidly. In the old days, some people generalised by saying that female footy players were big, a bit butch, that kind of stuff.

Take one look at our team and I’m pretty sure that perception will be shattered in an instant. I think we’ve got to be the prettiest team going around!

Everything has changed. We’ve got athletic builds, strength and conditioning teams, a coach, a physiotherapist; almost everything the men have at their disposal.

Women’s sports are booming everywhere – our cricketers, the Matildas, the AFLW – and we soon will be in rugby league, too. We will hopefully reach the NRL level in the near future. Our side of the sport is being built up from the grassroots by the NRL and I really support what they are doing.

When the time comes to start an open comp, we will have the necessary infrastructure and depth to be a success and, above all, play some great football.

When you ran it at me and I had to stop you = splitting my lip … you clearly thought it was funny ? @taleshaquinn #worldcupprep #contactsesh #whydoyoualwayslaughatme #twinnie @jillaroos

I obviously could not have achieved what I have to date without my parents’ boundless support and generosity. I would have stopped a long time ago.

Craig has also been enormous. We have been together since I was 16. He’s a beautiful boy. He has been my rock.

Before I started playing footy, we bought a seven-acre block of dairy farmland in Bega and built a house on it. He is basically at home working hard, paying the house off.

He has given up a lot. One day I’m sure we will settle and down start a family, maybe in a year or two when I finish playing.

We are currently trying to work out a job for Craig up here in Wollongong. At the moment, he is four and a half hours away from me in Bega and can only come up every second weekend.

I owe him so much. Craig wants me to achieve my dreams and is behind me in everything I do. I am so lucky to have him.