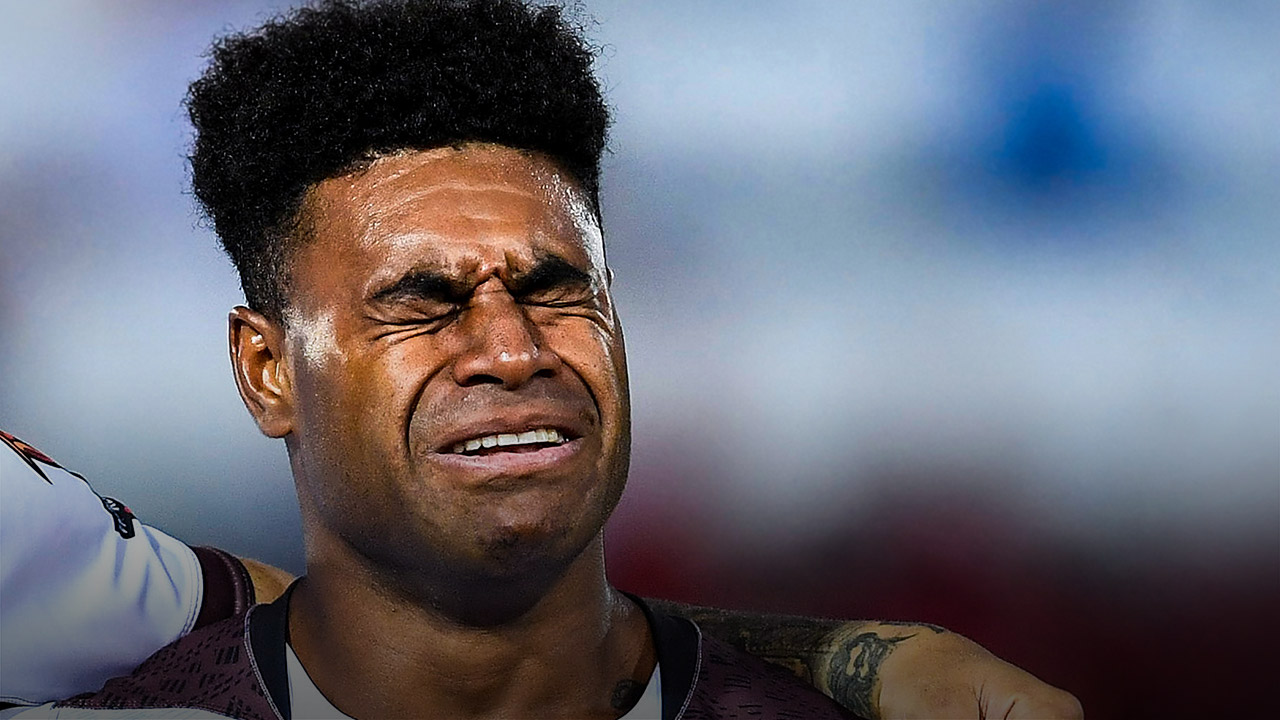 This is why we cry

This is why we cry

I know I’ll be in tears again when the Fijian national anthem plays before our World Cup quarter-final against New Zealand.

It’s not something I plan to do. I don’t prepare for it. It just happens.

They are tears of joy. All that emotion comes out when the anthem starts because we don’t get to play many Test matches for Fiji.

It’s not like it is with the Tier One nations who play regularly, so we really cherish these moments.

It hits you all at once, man. Our Fiji Bati emblem reads ‘Noqu Kalou Noqu Vanua’, which means ‘My God My Land’.

Those thoughts flood my mind and it’s all over. The tears just flow.

To play for our country, our ancestors, the players who have worn this jersey before, it’s the best feeling you can have in football.

We have created something special here and I’m not the only one who’s crying. The other boys are, too.

I’m a very spiritual person and this is a massive thing in my life that I’m getting to play in another World Cup, let alone captaining Fiji.

My brother, Wes, captained Fiji and I did it for the first time when we played Samoa in October last year. We won. I was full of emotion that day as well.

To be seen as that player by the management, the coaching staff and my peers – the players – feels incredible. What a privilege and honour it is.

Playing for Fiji is the pinnacle for me.

WHAT OUR TALATALA TAUGHT US

We have devotions twice a day: at seven in the morning and six at night. The team management, the coaching staff, the players – everyone is involved.

Our Talatala, the pastor, was with us when we first went into camp in Fiji and he joined us on the tour. So what we do is open up in prayer and then we sing a couple of gospel songs, little hymns, and then the pastor brings the word and shares the gospel with the boys.

I think that’s where all of our success comes from, to be honest. It has brought us so close together.

Our Fiji Bati emblem reads ‘Noqu Kalou Noqu Vanua’, which means ‘My God My Land’. I think about that. I think about my family, my friends, the players I’m doing this with. Those thoughts flood my mind and it’s all over. The tears just flow.

It’s the same Talatala the squad had for the 2008 World Cup – Jarryd Hayne still talks about how good that was – and everything he says is relatable to us as footballers and people.

He speaks truth and he cares about us. He’s not only thinking about the player who’s on the field, but after the 80 minutes.

When you’ve got someone like that who’s so concerned about your welfare and really loves the players it creates a special bond.

We have all embraced the devotions. I was part of the 2013 World Cup and we’ve got more people sharing now. There’s a lot of buy-in. It’s not a chore. We all want to be a part of it. There’s a unity, a oneness that is very powerful. It has created a brotherhood.

Sometimes the forwards will lead the devotions, or the backs. Or the coaching staff, led by Mick Potter, or the medical staff. The coaches and medical people have all been unreal. They’ve learnt the Fijian national anthem and all the hymns and songs we sing.

Our devotions do that to people.

Petero Civoniceva is here in camp with us. He’s done everything in the game – won grand finals, played Origin and for the Kangaroos – but he says that when he played in the 2013 World Cup for Fiji, he had never experienced anything like it.

He spoke to the boys about that at our devotions before dinner on Thursday night. He said that when he played for Queensland and Australia he loved it, but there was always something in the back of his mind about wanting to play for Fiji one day.

He said he was so lucky and blessed when he finally got to do it. It’s something he will never forget.

Jarryd cops a lot of flak in the media, but the Haynesy I’ve gotten to know is a real down-to-earth, good bloke.

I’ve been his roomie the last couple of weeks. He’s one of the senior players and he has helped everyone with their game, including me. He brings a lot of experience and he’s happy to share it.

It’s hard when the media portrays you in a negative light, because you can’t control what they say, but I’ve seen who he really is and I reckon he gets hard done by with a lot of the stories.

All he can control is what he does on the field. He’s doing a great job for us.

Jarryd is a team player, unselfish, especially in the halves role he’s playing. He’s got a young halves partner in Henry Raiwaluihe and has really helped him step up his game.

Suli Vunivalu is a freak. There’s no-one better at being able to sniff out a try and he’s always putting himself in the right spot at the right time. He does it for Melbourne Storm and he’s doing it for us as the leading try-scorer in this tournament.

He’s a big name already and a massive star of the future.

Taane Milne is one of the young boys in the squad and he’s joining us at Wests Tigers next year. He has put his stamp on this competition. His stats for tries, try assists, line-breaks and all of that stuff are fantastic. I think Suli’s really enjoying the fruits of playing outside Taane.

There are some great characters in this camp. Ashton Sims, Aku Uate, Api Koroisau and so many more. It’s been one of the best experiences I’ve had in my life. There’s been so much laughter.

HOW TO SPOT A KILLER

If you’ve been to Fiji yourself you’ll know how lovely the people are. They’re the best. They don’t have much, but they always find joy in the little things.

My Mum and Dad moved to Australia when they were both still teenagers. I grew up in Bexley, in the St George area of Sydney, but I’ve been back to Fiji a lot.

I’ve lost count of how many times. I embraced my heritage and the Fijian culture a long time ago and whenever I go back it’s an awesome experience. We’ve received so much support from them for our campaign and that makes us all even more proud.

Sometimes when you go into a football camp, you can’t wait to get home, but this is a great environment. The boys are just soaking it up, loving what we are a part of. No-one wants it to end.

We are really enjoying our football and off the field we are loving each other’s company, staying up late to play cards or just hanging out. No-one wants to go to bed because it’s too much fun.

It’s been the greatest time, man. If you ask any of the boys they’ll say the same thing.

Sometimes when you go into a football camp, you can’t wait to get home, but this is a great environment. The boys are just soaking it up, loving what we are a part of. No-one wants it to end.

We play some poker, a bit of 13, and Murder. That’s a really good one, where you’ve got to try and convince everyone you haven’t drawn the ace and you’re the killer.

I’ll tell you what: there are some good liars in this team because they look you right in the eye and you can’t tell if they’re the murderer or not! It’s pretty funny.

The murderers win all the time because you just can’t pick them. Haynesy is real good at it. He’s the exact same character whether he’s done it or not, so how would you know? Marcelo Montoya and Sitiveni Moceidreke are pretty good at it as well.

I give us a good chance against the Kiwis. I wouldn’t be playing if I didn’t think we were a chance. I believe we’ve got the squad to do the job.

New Zealand are a really good team and they’re number two in the world for a reason. It’s a big challenge for us, but it’s also a great opportunity. Everyone’s excited to get this chance.

We all want to test ourselves, not only as individuals but also to see where we as the Fijian team rank among the best in the world.

We made the semi-finals at the last World Cup and that’s where we want to be again.

New Zealand will be upset they lost against Tonga and will be looking to make amends, but we are here to win as well. We want that World Cup and we are going to keep going after it, no matter who we play.