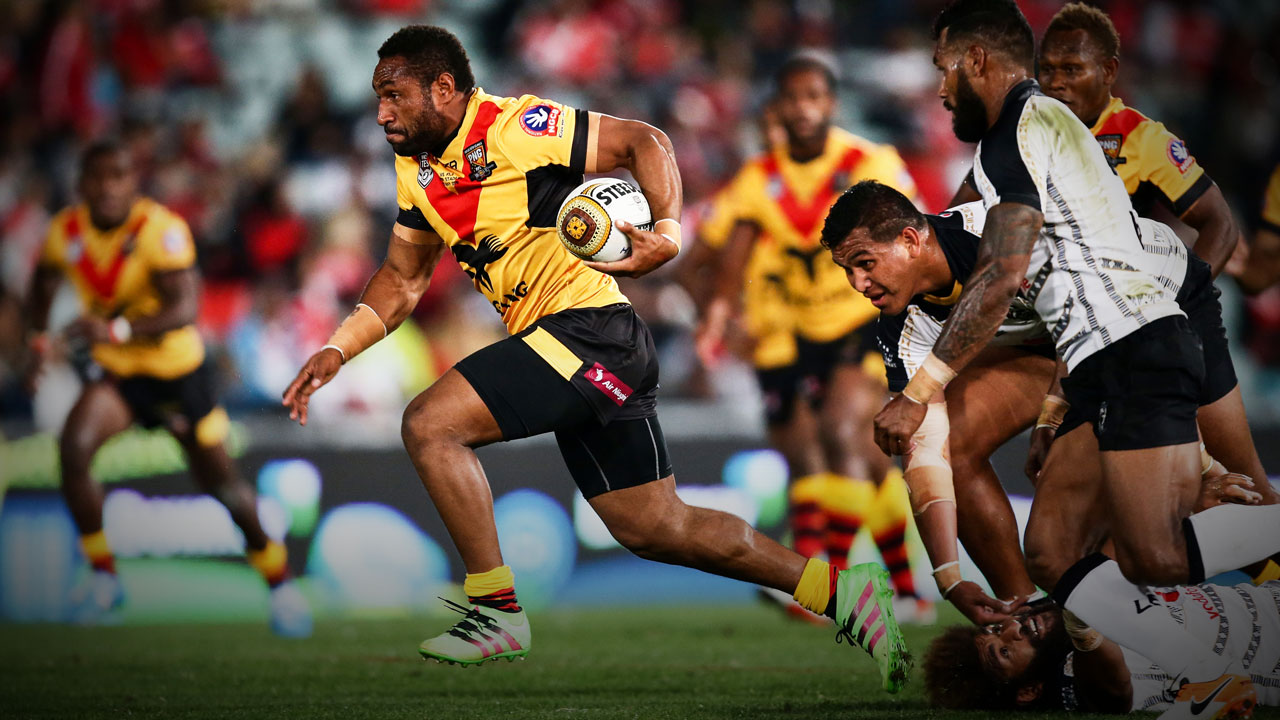 The whole nation was watching

The whole nation was watching

I grew up in the highlands of Papua New Guinea in a very mountainous area. My Dad is a community health worker and works in a health centre. My Mum is a farmer and a pastor too. My Christian beliefs are a big part of my life, of all our lives. I thank the Lord for everything that happens to us.

As you might know, rugby league is a bit like a religion for people in PNG too.

PNG people will do nearly anything to play a game of league. We used to walk everywhere, and sometimes we’d walk to another village to play a friendly rugby league match against another village.

If the village was far away from us, it would take five our six hours and we’d walk back the next day.

That shows you the passion that people in PNG have for the game. Everyone loves rugby league and they play it everywhere, any way they can.

As little kids in remote communities, sometimes we didn’t even have a ball. So we would take an empty Coke bottle and put grass into it to make it heavier – this was a plastic bottle by the way, not a glass one! You’d be surprised: even with a bottle full of grass, you can throw a pretty good spiral pass.

The fields were not too good in my province. Most of them don’t have a very flat surface, and it often gets muddy or whatever. But we still love it. Rugby league is the national sport here.

And when you go to play in Australia, it seems like the whole country is watching.

Amazing support back home for Justin Olam who made his NRL Debut yesterday! ??

It’s been a long wait, but finally last weekend, I made my NRL debut against the Dragons in Sydney when Young Tonumaipea was unfortunately injured during training.

I’ve been playing for Sunshine Coast Falcons in the Intrust Super Cup (also known as the Queensland Cup) in Queensland. I started playing for the PNG Hunters in the Q Cup and then the Storm signed me at the end of 2016.

That meant I changed to the Falcons, who are a feeder club to the Storm. If you don’t make first grade with the Storm, then that’s where we play second grade, in the Q Cup.

As little kids, sometimes we didn’t even have a ball. So we would take an empty Coke bottle and put grass into it.

As a Storm player based in Queensland, I fly a lot back and forwards from Sunshine Coast to Melbourne. I also fly all over Queensland to Rockhampton or Mackay and places like that with the Falcons. I need to sign up to a Frequent Flyer program. I haven’t done that yet!

Last year in the Q Cup, the Falcons met my old team the Hunters in the grand final. We lost a tight game 12-10. Obviously, I really wanted to win to create special something for myself and the team. We travel for hours every weekend to play, and I know the sacrifices the boys make to stay away from their family and everything.

But I was happy to see the PNG team win their first premiership. My first emotion was disappointment for our team, but if I had to lose to someone, I’d rather lose to PNG than anyone else. It means so much to those players and to our country, our communities, our people.

Playing my first NRL game was a good experience, even if unfortunately the Storm was beaten by the Dragons. I had mixed feelings before kick-off. Nerves, but mostly excitement. I’d been waiting for this my whole life.

I have always placed high expectations on myself and it’s one of the reasons I think I thrive at the Storm, as they have the highest expectations of their players. Some of the greatest players to ever put on a pair of boots are here, training and playing for this club. Now this was my turn to play alongside them and, if all goes well, to make a positive contribution.

The lead-in to the game was amazing, they are memories I will keep forever. The game itself was much faster than playing Q Cup. It’s far more instinctive also. My instincts are usually to run the ball. One of the strengths of my game is my speed and I usually back myself to score that close to the line.

On one shift, I knew I had committed Aitken to the tackle and Nightingale held his space. As soon as I knew Fox was outside him, I knew I just needed to get him the ball. He is the best finisher in the game.

It was amazing playing alongside Billy Slater. He was definitely one of my heroes growing up. I like him as a bloke both on and off the field. When I first came to the Storm, I was a bit nervous. But from the moment I arrived, he talked to me and made me feel welcome.

Billy is always the hardest trainer on the field and, when we train, he might tell me what to do. But he doesn’t correct you in public, he just makes sure you understand.

From PNG to the purple jersey ??

Storm legend Marcus Bai was an assistant coach of our national team, the Kumuls in the 2017 Rugby League World Cup. He has also given me a lot of advice. He’s a good man. He is a legend in PNG.

As for the Storm itself, I think the secret to the club’s success is simple. They just work so hard, they push you to your limits. I have been very fortunate to have so much development at a club like the Storm. I know I have more to learn but I will take every chance I get to develop my game and have a career in the NRL.

THE FUTURE OF LEAGUE IN PNG

I graduated from the University of Technology in Lae in PNG in 2016. I have a Bachelor of Science in Applied Physics specialising in electronics and instrumentation. The degree is broad, so I’m not sure what career path I will take after rugby league. That’s a question for the future.

Another question for the future is whether one day there will be an NRL team from PNG. I think one day there might be. It would be good for the game because PNG is such a rugby league-crazy nation.

If they had a NRL team in PNG, they would have thousands and thousands of viewers because most people in PNG already follow their own NRL team, so when their team travelled to PNG to play, there would be heaps of supporters of both teams.

It would be so good for the game. But realistically, I don’t think it’ll be soon. It will take time, but I think it will come.

Meanwhile, I believe the local PNG competition is improving with players in the Intrust Cup and of course the Hunters sharing their knowledge and experiences back home. The local competition’s getting much better than it used to be. I reckon they could pick another Queensland Cup team from the local competition, that’s how much depth there is. There’s a lot of young talent there.

There is so much passion in PNG rugby league. Rugby league is a part of people’s daily routines. It is what we talk about to our friends and families. You saw that support first-hand during the Rugby League World Cup in Port Moresby. The whole country was behind us, living and breathing it with us.

The secret to the Storm’s success is simple. They just work so hard, they push you to your limits.

At times, there have been reports of crowd violence at rugby league games in PNG, but it’s not like there’s violence at every game. It’s just a few things that happened, and then people go looking for stories.

As a kid growing up, I was a big fan. I used to watch teams and it was not too bad. There were some frustrated fans, but it was not common. You see that in nearly every sport in every country unfortunately.

As I said, rugby league in PNG is about passion. I hope to do it justice and bring that passion and pride every time I pull on a Storm jersey this year.