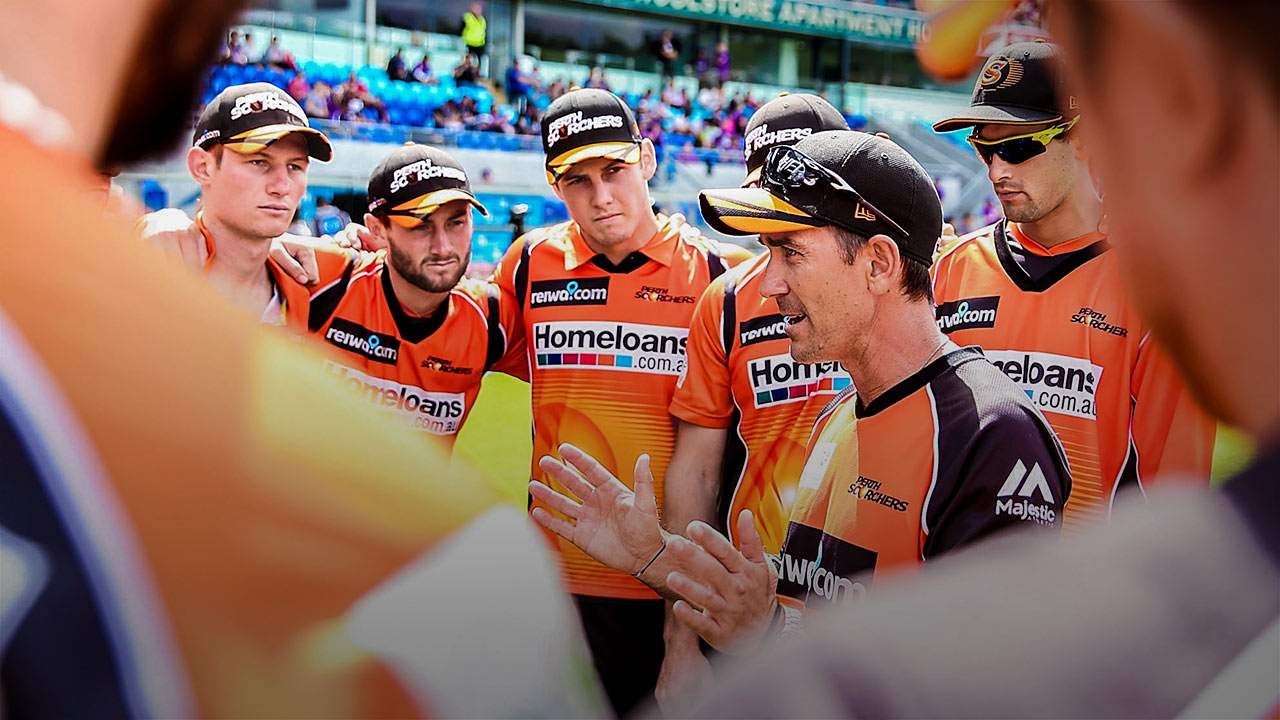 If you come into my office, you’ll see quite a few books.

On my desk facing me I’ve got the Alex Ferguson book, I’ve got the Steve Jobs book that faces me, and there’s a book called Legacy which is about the All Blacks culture, which also faces me.

Then facing whoever comes and sits in my office is a book called the No Asshole Rule.

It’s a really good business manual which basically talks about culture and how important people are in culture. And there’s another book which faces other people, which I got in 1993, called Being Happy.

Being Happy is a fantastic book which tells people who walk into my office that their wellbeing is important to me.

When I talk corporately or talk about leadership, people’s perception of Justin Langer might be that I’m this tough guy who used to open the batting and who does martial arts.

But actually, what I realise is that you’ve got to care for people. You have to make them feel special and, if you do, they’ll run through brick walls for you.

I think that Steve Waugh and Ricky Ponting and Allan Border, they made you feel special. Everyone does it differently, but if they make you feel special, you never forget it and you want to repay them.

Last one for our ? WORLD PHILOSOPHY DAY ? series. Far be it from us to get all deep, but with a coach like JL, we couldn't help it! ?4 of 4? #worldphilosophyday #philosophy #MADETOUGH

I was a really serious young bloke. One of the things I learned early on through personal experience was that the harder you try, the worse it gets.

At the time I was going, ‘Mate, all I want to do is bat,’ and I didn’t get his wisdom that I needed to go and relax and chill out a bit.

But now I understand exactly what he’s talking about.

People’s perception of Justin Langer might be that I’m this tough guy who used to open the batting and who does martial arts. But actually, what I realise is that you’ve got to care for people.

If you’re happy off the field, you’ll be fine on the field.

I arrive at training some days and see Shaun Marsh with his beautiful wife, his little boy, and he’s so settled in his life now.

He’s so happy and haven’t we seen the results on the field. It’s the same with all our players and that’s why we encourage them to study or do some work or have a passion.

A lot of our guys – Mitch Marsh and Cameron Bancroft and others – they’re almost addicted to their guitars. It takes them away from cricket.

It’s a bloody tough business this, and you’ve got to have other things that take you away from the stresses. People do it differently, but if you work out what makes you happy off the field, you’ll be fine on the field.

Of all my books, the one which is most irreplaceable to me is a book called Zen in the Martial Arts.

I don’t usually read books more than once, but I would have read it back and forth 60 or 70 times over the years I reckon, and I would have given out about 50 copies.

I just think it contains such simple life lessons about sport and life. It uses the author’s training in martial arts to talk about some of the great lessons he’s learned from mentors in martial arts. It’s a small handbook but it’s a really great book and I think the lessons of sport and life are all encompassed in this little book. It’s brilliant.

One of the messages would be that often the harder you try, the worse it gets. I knew that as a player and I certainly know that as a coach.

There’s a word in martial arts: kime. It talks about a loose body and a tight mind. So you’ve got to concentrate but you’ve also got to train your body to be really loose.

I think one of the great challenges in our sport is that it’s such a game of concentration but you’ve also got to have the wisdom or the courage or the training to let your body go.

If you think of all the great athletes – whether you talk about Roger Federer or Usain Bolt or Rafa Nadal or the great boxers like Muhammad Ali, go through the list of them – they’ve all got a really concentrated mind but they’ve also got incredibly loose bodies.

If you’ve got a loose body, your feet can dance, you can move, your body can get into position.

But if you’re tight in your muscles, well then you’re in a lot of strife because you can’t actually move. It doesn’t matter if you’re batting, bowling or fielding.

One of our mantras in the Scorchers is the Kelly Slater theory.

Slater once said – and I saw him interviewed just before my last Ashes series – that, ‘When I don’t care whether I win or lose, I usually win.’

A lot of people get confused by that message but it’s actually really powerful.

He’s got talent like our players do, and he trains really hard like they do, but what he’s saying is that when he lets go of the outcome and just concentrates on what’s important, then you get success.

The Kelly Slater theory is critical in the Scorchers’ success.

One of our mantras in the Scorchers is the Kelly Slater theory. Slater once said – and I saw him interviewed just before my last Ashes series – that “when I don’t care whether I win or lose, I usually win”.

It doesn’t matter if it’s one-day, Twenty20 or Test cricket. You’ve got to be as concentrated as possible.

It always makes me laugh if you ask a young cricketer, ‘What were you thinking that day?’ and they say, ‘I wasn’t thinking about anything.’

I know that’s frogshit because even the Dalai Lama is going to be thinking about something when he meditates. It’s just impossible to turn your mind off.

The point is to concentrate on one thing or two little things which takes away the confusion of a thousand things. That simplifies things for everybody.

I feel like I’ve found my true calling as a coach, and this might sound like a cliché, but I’ve always wanted to help people, and to help people get better.

It’s funny how life turns out, let’s put it that way.

I wouldn’t be here without unbelievable mentors. I’ve been blessed, and I guess that goes hand in hand with what I’m doing now. You realise how important great mentors are.

I’ve had incredible mentors from my grandparents, my mum and dad, and I suppose if I’m tough on some of our players at different times, it’s because some of the best mentors I’ve had in my life have been really hard on me. But they’re also some of my best friends in life now, and if there are times when I’ve been really hard on the players, it’s always been behind closed doors.

Instilling belief in players is my main job.

We can teach them the technical skills, and you’ve got to work on that tirelessly. There’s actually not enough hours in the day to improve your skill, there’s just not.

I love when I hear the stories that come out about Steve Smith and how much he works on his game and the boys come back and say, ‘You will not believe how many balls Steve Smith just hit,’ and I go, ‘Yeah, no shit, all the great players do.’ I mean there’s no secret.

But the other side of it is helping them to concentrate on what’s important. You can motivate people but you’ve got to have the wisdom to know that they’re not going to learn it unless they’re out amongst it.

What you’re doing is giving them a chance to fail and succeed, and a bit of a journey to go on, because that’s the only way to really learn.