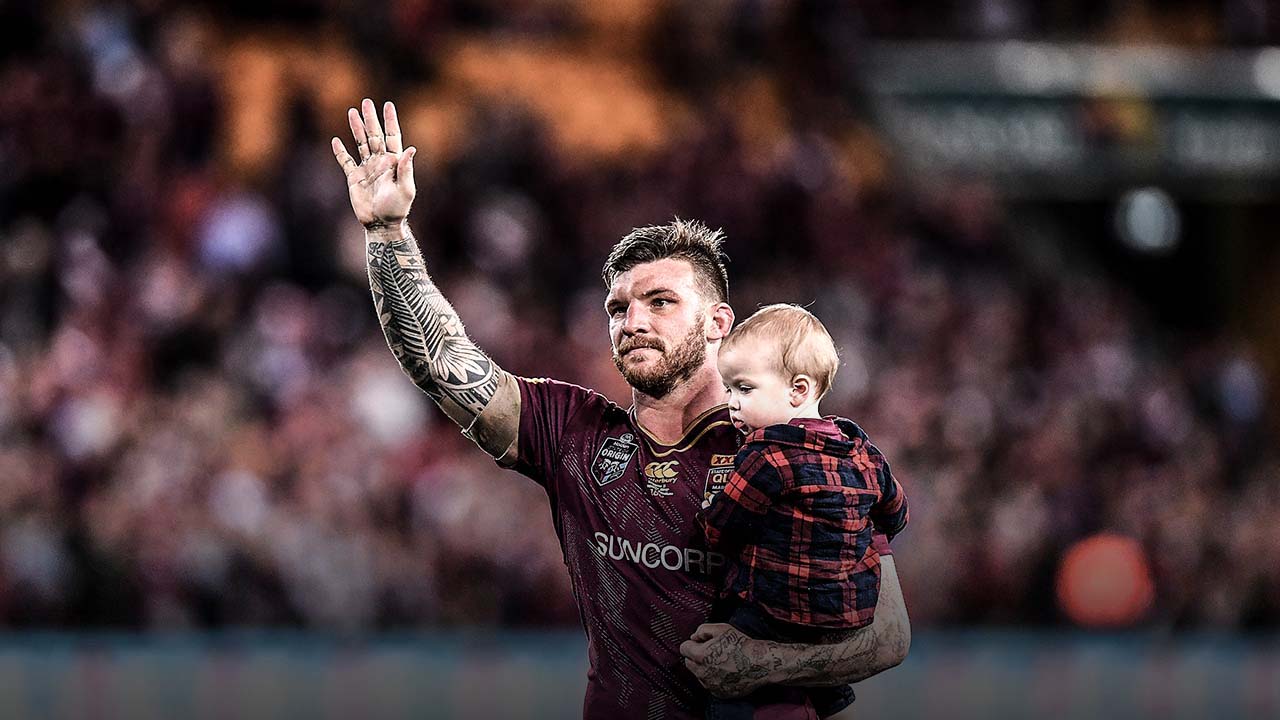 The day I lost my eye

The day I lost my eye

Sometimes I think about not being able to see my wife and kids again.

It’s a scary thought and I can’t stop it from popping into my head from time-to-time. I guess that’s natural when you’ve lost your left eye to rugby league. You worry that you’re one bad hit to the right eye away from being blind.

I’m not complaining. Rugby league is my life. It has given me so much, more than I thought it could. I love the game and appreciate that it pays me a wage that gives my family the lifestyle they deserve.

But it has come with its challenges.

I was reckless in the way I lived my life and played my footy. I was 21 years old and playing my third season in first grade with the Broncos. I thought I’d made it. Nothing was going to get in my way.

We were playing the Bulldogs at Suncorp Stadium. It was round eight in 2011 and there were only a few seconds left in the game.

I made a pretty standard tackle on Greg Eastwood and one of my teammates, Mitchell Dodds, came in to help out. His finger accidentally poked me in the eye. The pain was sharp and I dropped to the ground. I couldn’t see out of my left eye.

I didn’t think all that much of it at first. They’d treat the injury, my vision would return and I’d be back out on the field in a week, maybe two.

But the specialist looked worried and ordered me straight to the surgeon. They performed an operation the next day.

My iris had collapsed and my retina had detached. The operation involved sticking a gas into my eyeball that kind of welds the eye. The gas bubble in your eyeball pushes your retina down to re-stick it.

When Albert Aralar, the eye specialist, told me what had happened after the operation, it didn’t really sink in. I was just asking, ‘When can I play footy again?’ Albert’s response was, ‘No, you probably won’t be able to play football again.’

I guess that’s natural when you’ve lost your left eye to rugby league. You worry that you’re one bad hit to the right eye away from being blind.

He was more concerned about my health and future. A hit to my left eye could collapse it, a bad knock to my right eye would leave me blind. And if I did come back and take the risk of playing with one eye, I would basically have to re-learn everything I’d already learned.

Depth perception. Catching the ball. What lines to run. Tackling. Everything. I had to get used to it all over again.

I was devastated, to be honest. I felt like I was about to lose everything. I remember Andrew Gee calling me. He was the general manager at the Broncos back then.

He reassured me at the time that the club was going to stand by me and not get rid of me. They would help me go through the process and support me throughout my recovery.

‘MY FIRST TRAINING SESSION WAS RUBBISH’

The next four weeks were torture.

They put this big elastic band around my eyeball that held the eye together. I had stitches in there, too. I had to lie on my left-hand side the whole time. I couldn’t get off the couch. And if I went to the toilet, I had to tilt my head to the left side before, during and after. I was pretty much stationary for a whole month.

At home. By myself. My mind swimming with all kinds of thoughts.

I was eventually allowed to return to training, but there were no guarantees. It’s not like a broken arm or a dislocated shoulder where there’s an obvious treatment path and a set timeframe for recovery.

It’s more like, ‘We’ll do the surgery and see how it goes’. You’re always wondering whether you’re healing properly. The other thing was that I didn’t know other one-eyed footy players, so there wasn’t anyone I could ask for advice on how to deal with it.

I was a bit cranky but, more than anything, I was determined to come back. I didn’t want an injury or a disability to shape my football career.

I was devastated, to be honest. I felt like I was about to lose everything.

My first training session was rubbish. I couldn’t see properly and I was dropping balls all over the place.

I was really worried. I couldn’t play footy like this. I was probably lucky I was playing front row because I didn’t have to catch long balls or high balls. But even the basics were really difficult.

The biggest thing was getting used to the big hits. I instinctively brace now for the hit I can’t see coming.

But, back then, I don’t know, the hits just felt a lot bigger and more unexpected. I also had to put my head down low and tackle low. It was hard getting the confidence up to do that, putting my head somewhere where I could hurt the other eye.

I invented a few training drills. Hand-eye coordination stuff. I’d bounce a tennis ball off the wall and try to catch it on my blind side, so I could get used to moving and improve my depth perception.

I would also close my good eye, then open it quickly and get someone to pass me a ball straight away. That was for reflexes.

About seven weeks had passed when Anthony Griffin, the Broncos coach at the time, approached me.

Brisbane were having a bad run with injuries and Hook was about to select his team to play Parramatta that week.

‘If you don’t play we’re going to have to bring up a Queensland Cup player,’ he said to me. ‘Do you think you’re capable?’

I had a bit of thinking to do. I’d started using a contact lens in my bad eye that was helping with the sharpness of shadows and tracking a ball from distance.

I just didn’t want to embarrass myself or the club. In the end, I put my hand up to play. My only goal was to get through the 80 minutes without dropping a ball or missing a tackle.

We ended up winning that game at Parramatta Stadium 16-12. Matt Gillett scored the match-winner. I didn’t do anything special but I couldn’t have been happier.

I’d made my return within eight weeks, in the top grade and I hadn’t stuffed up. My confidence started to build from there.

I honestly can’t remember what life was like with two functioning eyes. I guess it’s just the way your brain copes.

When someone asks me, ‘What’s the difference between then and now?’, I don’t have an answer. Everything I can remember, I remember as if I had seen it through my right eye only.

This is what it’s like. If I put my hand over my good eye, all I can see is light and the odd shadow. If you passed a footy to me, I’d see a bit of a shadow … and then it would hit me in the face.

The biggest thing was getting used to the big hits. I instinctively brace now for the hit I can’t see coming.

I’m really busy when I play now, looking around. I talk a lot in defence so I know where everyone is. And if I’m catching the ball from left-to-right, I’ll have my head turned a little bit more.

There’s a bit of preparation that goes into each run – looking up, trying to pick the direction I’m heading and where I’m trying to get to. I’m constantly looking around instead of just concentrating on the ball.

I don’t like playing in stadiums with shitty lights. That’s why I’m pretty content playing at Suncorp every Friday night or daytime footy.

Suncorp lights up like daytime at night. It’s very clear. But on a dark field, I can lose track of the ball in some shadows and lights if the ball goes up in the air.

But there’s still the odd time when it makes a difference. I remember a game against the Raiders last year where Josh Papalii got me on my blindside and absolutely smashed me. I wasn’t prepared for it.

This year, I was playing against the Eels and trod on Tim Mannah. I know Tim. He’s a good fella. People wrote what they wanted to about it, but the truth is I didn’t see him.

Why the left side? So my right eye is seeing everything. It’s a good thing that I only have to give way to my right when driving!

I always sit really close to the screens in meetings and, when I’m texting on my phone, it looks like I’m on top of my phone because I’m that close to it.

But, honestly, I don’t talk about it all that much. I wouldn’t be surprised if a few of my teammates found out about it for the first time by reading this column.

I don’t ask to be treated differently and, frankly, I don’t want it. I’m not disabled. These are just the cards I’ve been dealt and I’m playing them the best I can.

This has been my most consistent year. I’m a bit older now and know how to prepare for games. I’m really enjoying my role as a lock.

I feel better playing there than front row, but I had always had to play there because we’ve had Corey Parker at the club. I still play for Australia and Queensland in the front row – and, don’t get me wrong, l love it –  but I think I play better at lock behind the big guys where I can use my feet and pass the ball more.

My bad eye will turn white in the next five or six years. It’s a cataract from the initial surgery. I could have it cut out, but that would most likely mean having to quit footy.

The eye would be too weak to stand up to heavy contact in games. I won’t be taking it out until after I retire. If the eye ever started interrupting the way the team plays, I would put the team before myself in that situation. I’d quit.

The last thing I would ever want to do is let them down.

I’ve had the good eye poked in games. It makes me think about Maiya and Maxon, my kids, and Tanyssa, my wife, and that fear I mentioned earlier about not being able to see them again.

It’s a risk I’ve got to take. I’m grateful every time I come off the field in good nick. It’s just the responsibility of being a husband and a parent.

I love them more than anything.