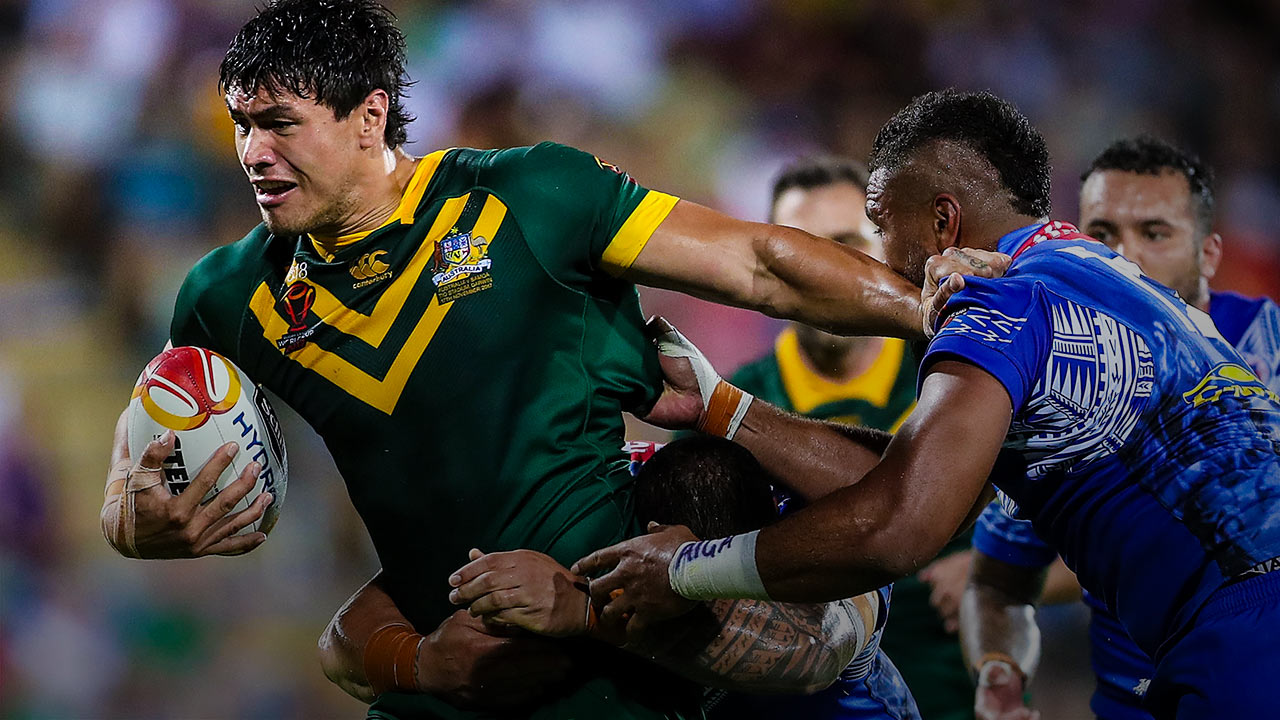 The hardest decision of all

The hardest decision of all

On the Sunday, we won the Grand Final.

On the Monday, I was named in the World Cup squad.

On the Tuesday, I was packing boxes – because on the Friday I was moving the family 2,500 kilometres north to Townsville.

Honestly, I didn’t think life could be this crazy. The whole of 2017 has been a bit of a blur but this last month, in particular, has been unlike anything else I’ve ever experienced.

To think it could all end this Saturday with a World Cup winners medal is pretty overwhelming. That’s the absolute pinnacle of rugby league. England will come out firing but we’re confident in the work we’ve done.

To go around one more time with the likes of Cam Smith, Billy Slater, Cooper Cronk and Will Chambers will be really special given Coops is off to the Roosters and I’m headed to the Cowboys in 2018.

For all of us, a win in the World Cup Final would cap a year none of us will ever forget.

I wish I could go back to the week that followed our Grand Final win and live it all over again in slow motion. It all happened so quickly.

We were on the team bus back in Melbourne the day after the Storm’s win over the Cowboys when Frank Ponissi read out the Kangaroos’ World Cup squad. The whole bus just erupted when all our names were called out.

From there, it was a quick Mad Monday then straight into packing up the house. It was so hectic I didn’t even make it to the party Molly Meldrum threw for us!

I’ve been incredibly lucky to be part of a footy club like the Storm. There is no way I would have been playing Test rugby league if it wasn’t for this club. From the moment I joined them straight out of Young High School and into their under 20s system, I’ve made some lifelong friends.

Honestly, I didn’t think life could be this crazy. The whole of 2017 has been a bit of a blur but this last month, in particular, has been unlike anything else I’ve ever experienced.

The hardest decision I’ve made in my life was to leave Melbourne to join the Cowboys.

I wanted to address it with everyone before the season started. I told the coaching staff first then I pulled the boys together before one of our training sessions and told them my reasons behind it.

I figured there might be a few players in the group unhappy with the decision so I just told them the truth: the move was the best thing for my family.

Brianna and I have two kids now, Archie and Tex, and she has family near Townsville that can help with them. We don’t have that same kind of support in Melbourne.

To win the Grand Final the year after experiencing the pain of losing one was a great way to go out.

I haven’t had a chance to think too much about what it will be like playing against Melbourne next year. I imagine it will be business as usual during the game, and then I’d hope we’d all be able to grab a beer together after the game.

The feeling of getting selected in a World Cup squad is a bit different to other things you experience in rugby league.

It’s humbling. There are a few nerves. The honour of pulling on your country’s jersey is always there.

I love Australia. It has given me everything.

You think about being a kid back in Young, running around in the backyard and pretending you were your heroes. I have some great memories of watching Big Mal on the TV. Now he’s coaching me. It’s incredible.

A week after the Grand Final, we were straight into Kangaroos camp in Fiji. Most of the players brought their partners and kids along, but I couldn’t. We had just moved the family from Melbourne to Townsville and they were still getting settled in the next place.

It’s OK. I’m making it up to them by taking them all to Fiji straight after the final!

Sometimes, when I look around the dressing room and see guys like Felise Kaufusi, Billy, Smithy, Coops, Cam Munster and Will, it feels like being back at the Storm. I’m very lucky in that sense.

Coops had a quiet word to me before the tournament. He told me to enjoy the occasion and play my normal game. It’s what had got me here in the first place. Also, running off Cam is something I’ve been doing for years. It has made the transition to Test footy a lot easier.

To think it could all end this Saturday with a World Cup winners medal is pretty overwhelming. That’s the absolute pinnacle of rugby league. England will come out firing but we’re confident in the work we’ve done.

The emotion really hits me when they play the national anthem. When the music starts playing and you see your family up in the stands, you think about all the people and events that got you here.

You are determined not to let any of your teammates down and to uphold what all those before you built.

I can only imagine what it’s going to be like running out for the World Cup final. It might be the last chance I get to play with guys like Cam, Billy and Coops. They’re not just the best players of this generation, but probably any generation.

To win a World Cup for your country – and to do it alongside those blokes – would be about as big an achievement as I can imagine. I’ll be doing everything I can to make it happen on Saturday.

And then the next chapter of our lives will begin.

I’ve spent a grand total of four days in the new family home in Townsville. The three days after the Grand Final were spent surrounded by boxes in Melbourne with the kids running around like lunatics. Then we loaded it all into the truck, flew up on the Friday and unpacked what we could and then, four days later, I was off to Kangaroos camp.

I’m looking forward to taking a little break with the family and reflecting on what has been a huge year before ripping in with the Cowboys.

I’m really looking forward to joining up with a couple of old mates. Ben Hampton is the Godfather to Archie and Justin O’Neill and I started together at the same time at the Storm when I was 17. A few familiar faces will make the transition a lot easier.

And how good will it be to line up alongside blokes like Matt Scott, Johnathan Thurston and Jason Taumalolo every week?

I’ve always had great respect for the Cowboys as an opponent. I’m looking forward to being part of Paul Green’s set-up.

If you had told me at the start of 2017 that by the end of the year I would win a Grand Final, make a World Cup Final and move my family about as far as you can up the east coast, I wouldn’t have believed you.

If you had told me that I’d do all three of those things within the space of a few weeks, I’d have laughed at you.

But it’s all happened and now I have the chance to add a World Cup winners’ medal to the Grand Final ring. How many chances do you get in life to do that?!